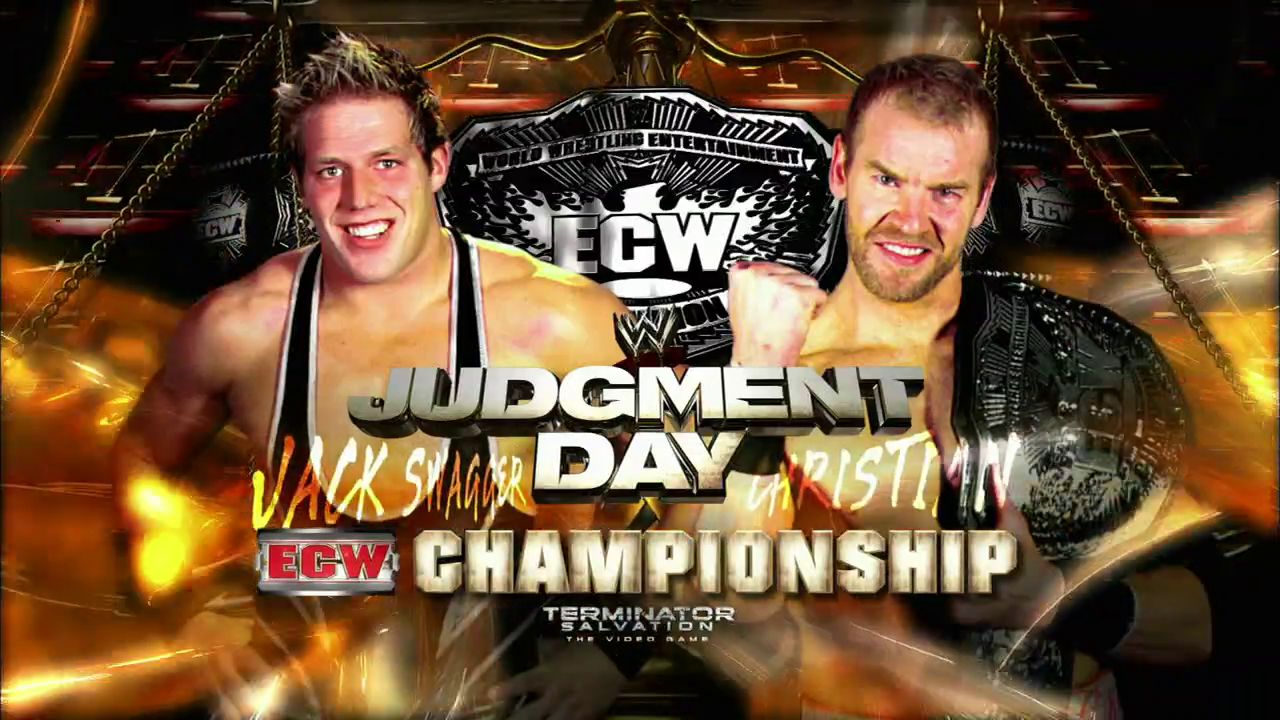 Uh oh, we’re in the European Title Match No-One Asked for slot on the PPV but luckily Christian gets a tremendous pop that is far bigger than the brand he’s representing.

Christian fucks with Jack by hitting and running away while Striker compares Christian’s offence to “a sleek sports car weaving in and out of traffic” which is a decent line. Christian sends Jack to the outside just so he can dive onto him but Big Jack responds by press slamming Smaller Chris into the ringpost and showcases some of his fancy mat-wrestling with a er basic body scissor. There’s big gaps of silence on commentary so either Striker is referencing a Buck Zumhofe vs. Invader 1 match or both men are struggling to come up with anything interesting to say about this match and I can’t blame them. Swagger misses the Vader Bomb so Christian lands a flying elbow off the top, followed by somehow landing that rope-assisted kick twice in a row which a good luck for Jack. Swagger avoids the Career Shortening Diving Headbutt and tries a roll-up but fucks it so the ref won’t count as the shoulders aren’t down. So after looking foolish in two consecutive spots, they follow it up with this Wile E. Coyote sequence as I wonder which road agent Swagger forgot to shake the hand of.

Swagger sends Christian flying with an Overhead Belly To Belly off the top to warm up the crowd that has simmered since the entrances. Christian tries for a Sunset Flip but Jack sits down to counter. He’s less Summerslam 1992 and more Summerslam 2010 so it only gets two. Spinning reverse DDT also gets two but Jack follows with a roll-up pin and Jack’s pulling the tights, however the ref is the other side of him and can’t see so the ref just decides to stop counting to move himself to check WHAT THE FUCK.

Finishers get exchanged, Christian pulls Swagger’s straps down, rolls him up and gives HIM a dirty pin (with no ref check) for the win.

Winner and still ECW Champion: Christian (I have no clue what was up with this match or why they decided to give Swagger a lobotomy. I get the  end result being “Swagger tried to cheat but Christian cheated better” but that doesn’t work if the guy Christian is out-smarting is wrestling like his shoe-laces could out-wit him. After a great match last month, this turned the clock back on all the progress Jack’s made as he went from Dan Severn to Skeletor in less than ten minutes.)

Cold opening (oooo) starts with Swagger sat down in the middle of the ring, refusing to move until he gets justice. Tiffany tries to get rid of him but he’s pissed at Christian cheating at Backlash and Judgement Day, and tells Tiffany to sod off as he’ll be around longer than her (she’d be gone in 2010 so good call) and she unconvincingly tells him to get up and GIT. Tiffany then welcomes Christian to come to the ring WHILE SWAGGER IS STILL ON THE RAMP so naturally Swagger pushes him off the ramp, splatting Christian on the floor below. Well done Tiffers.

Christian still has to wrestle so OH GREAT IT’S SISTER FUCKER. Balls to this, I’m going to the shops.

I’m back and sadly I pressed pause so I’ll have to watch this. Christian’s knee has been tweaked and he’s nearly in as much pain as the viewer is listening to Striker call Paul “the scoundrel of skulduggery.” Paul dominates to begin with and Christian takes a nice plant over the ring steps. Christian gets stretched as the crowd does nothing. Striker dubs Burchill’s sister “the Scarlet Witch” because “the Cersei Lannister” wouldn’t make sense yet. Christian escapes a single crab and gets a near-fall from a Tornado DDT to excite the crowd. Christian starts his comeback with a Reverse DDT and Sunset Flip. Killswitch gets countered into a standard suplex for another near-fall and the crowd are popping loudly for the kickouts now. Rope-assisted kick sets up the flying back elbow sets up the Killswitch to end it with the crowd live.

Winner: Christian (Burchill’s arsenal is dull as hell (his secondary move is a normal-arse front suplex) but he’s good at working over an injury so this was acceptable even if the crowd wasn’t 100% into it/)

Christian knows Swagger’s mad and says he’s going to be even madder as he issues a challenge to Tommy Dreamer (the guy Christian was wrestling at Madison Square Garden when Swagger interfered in the match.)

Backstage we get more Swagger and Tiffany (oh god) as ‘Cowboy’ Tiffany Watts gets sick of Swagger’s whining and gives him the rest of the night off. 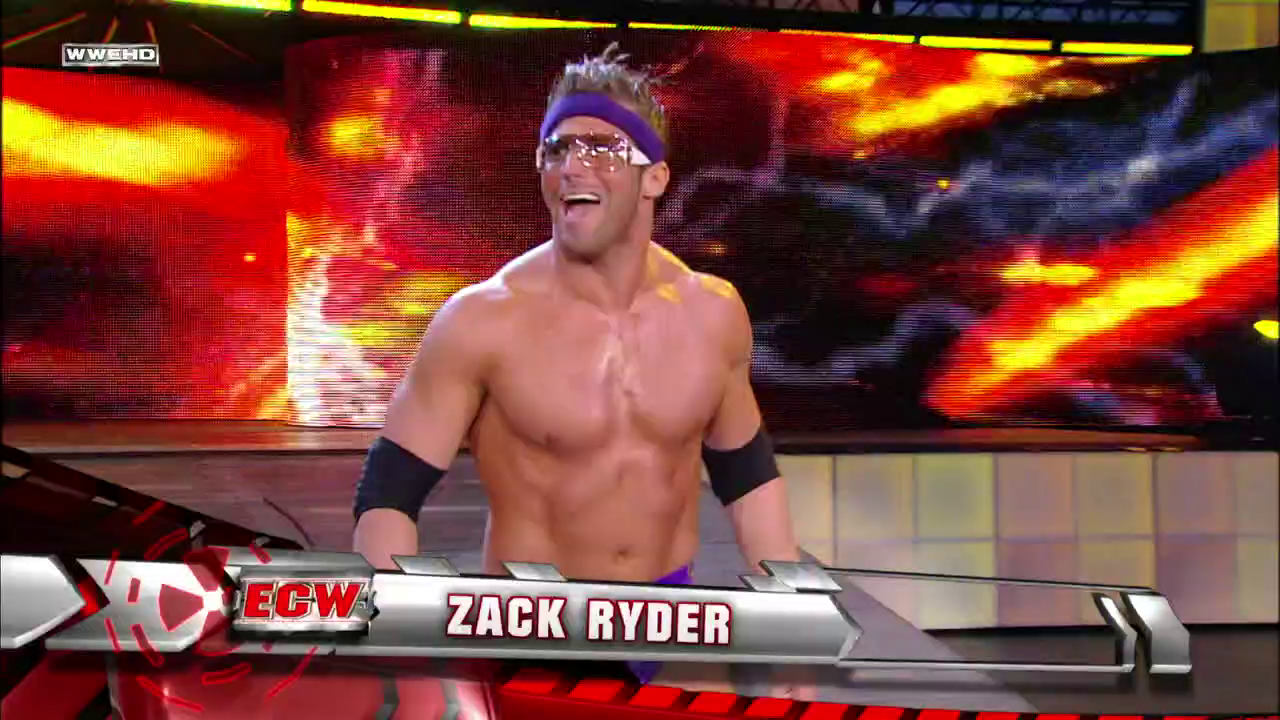 Ryder’s first singles match with the new hair and one-legged tights. Adam Green aka Rudy Switchblade still wrestles in OVW to this day but he doesn’t get chryon so no photo. Ryder wrestles like a heel, yells WOOO WOOO WOOO and wins after the Zack Attack.

Winner: Zack Ryder (Highlight was a fan getting this sign confiscated on camera.)

Davey Hart Smith establishes he’s a Second Generation star as well a dick by telling Nattie that he’s better than his Dad ever was. He must have been reading Scott’s Superstar 1992 rants.

Kozlov is here in military regalia to speak evil foreignese because some things are timeless in wrestling. Nothing much happens so here’s some good Soviet music instead.

Roving Reporter Gregory Helms tells us Tommy Dreamer vs. Christian is happening…on Superstars this Thursday. The C-Show pushing the D-Show is adorable but am I fuck making time for it.

Plenty of Yayyys for Finlay. I thought they’d stop after Hornswoggle left him but there’s something adorable about the terrifying veteran, I guess. DHS interfered in last week’s Tyson Kidd vs. Finlay match so we get Smith’s debut on ECW after some losses on Heat & Raw. Finlay slaps him around for so long that the crowd start chanting “Finlay!” as Finlay has DHS in a submission. Finlay keeps DHS in a Hammerlock for several minutes as this match is going long (or short and boring). After minutes of arm-based offence, DHS escapes and gives Fit the Running Powerslam on the outside as we go to break.

When we return, DHS is working over his opponent’s back the exact same way as Finlay by getting a few strikes in and then holding him in place for several minutes as this mirror match is literally sapping the energy from the crowd. Finlay breaks up a Camel Clutch with angry strikes but DHS ends up in the corner so the ref has to separate them (which I never really understood) and DHS gets a cheeky big boot in and goes back to the Camel Clutch. Then when Finlay tries to escape, he gets him in a chinlock and it’s a good job I got some coffee when I went to the shops. Finlay counters another Running Powerslam by shoving DHS into the post (hey that’s his spot) and squishing him with an Earthquake Stomp for two. Finlay can’t get the Celtic Cross due to the damage on his back so he clotheslines him to the outside instead. Kidd gets dunked while trying to attack Finlay, leaving Fit wide open to getting twatted with Nattie’s boot courtesy of DHS who ends the match with a Saito Suplex. 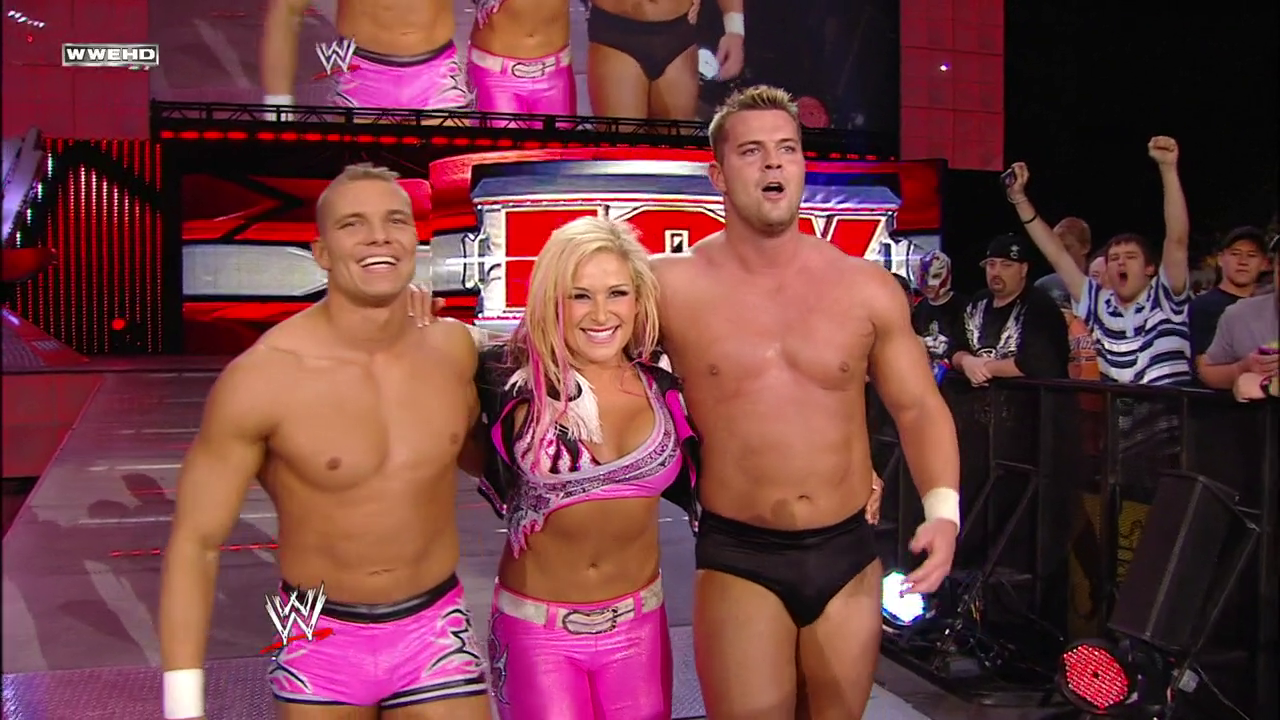 Winner: David Hart Smith (I think they had a decent ten minutes planned but then someone said “the Ryder match went short so go longer” and we got a ridiculously uneventful eight minutes tacked on. It was impossible to judge where DHS was at in terms of talent as he spent more time lying on the mat than Inoki fighting Ali.)

Overall: Right now the only thing this brand has going for it is Christian’s popularity. Swagger’s been neutered, Tiffany is having to act like Clint Eastwood in Heartbreak Ridge, Dreamer vs. Christian is happening on Superstars, Kozlov is still doing boring squashes and The Hart Trilogy still has the hand-brake on. Hopefully the brand can figure out where it wants to go and hurry up and get there.

I’ve been Maffew, leave me alone.

Bless the person who did this pic.twitter.com/gllFPCdUUl