We’re in Las Vegas, NV and we start with an even-sweatier-than-usual Mark Henry. We get clips from last week of Henry’s destruction of Jamie Noble and Matt Hardy. Tony Atlas demands a title shot for Henners but Teddy disagrees and makes Henry one of the choices at Cyber Sunday for a title match. Henry stares down Teddy until Air Bourne’s original (superior) theme interrupts things. Bourne offers Henry a hand-shake but retracts it while grinning to show his alliance with The Riott Squad and guaranteeing he’s going to get his wig split.

Chavo keeps it basic and slow until Bourne starts hitting armdrags and it goes back to strikes and chinlocks. Bourne sends Chavo outside and collides with a stunning flop over the top rope.

When we return from break we get replays of Chavo turning a double-knees off the top into a single crab which is the best thing he’s done in months and no-one saw it. Bourne lands on knees during a standing moonsault so Chavo locks in a Mutoh-lock. Bourne escapes but Chavo shows off more of his puro knowledge with a ROLLING LIGER KICK.

It only gets two but Bourne should have let him pin him as a sign of respect. Bourne kicks away at Chavo and nearly gets a win from the cool school-boy he’s been using where he uses his all his weight. A big knee and a shotei sets up a top-rope Frankensteiner which he misses and bounces on his knackers then head & shoulders. It somehow only gets two and the crowd is into this. Chavo goes back to the Single Crab, Bourne tries to make the ropes but Chavo yanks him back to the centre of the ring but by doing so lets Bourne roll onto his front and gets kicked in the head. That was beautiful. Bourne’s still hurting so Chavo gets two thirds of Three Amigos (Steve Martin & Chevy Chase) to massive boos before Bourne knees him mid-suplex and sends him in the corner with a Tiger Mask kick. Chavo mounts the top rope and Bourne connects with a Frankensteiner from a standing position because he’s made of helium before hitting the Shooting Star Press to win.

Winner: Evan Bourne (This started off slow and plodding like most of Chavo’s matches this year but he surprised me by turning the clock back, watching a load of NJPW tapes and stepping up to make Bourne look as impressive as possible and the crowd were going nuts as a result. Or maybe they were cheering the legal whores, I dunno. Either way, this was sweet.)

Post-match Mark Henry splats Evan Bourne which is his own fault really.

We get a reminder that YOU can vote for HHH’s opponent at Cyber Sunday: Jeff Hardy, Kozlov or both of them in a triple threat. You can tell this was the last Cyber Sunday as they’d ran out of ideas.

SMACKDOWN REBOUND: Jeff Hardy beats MVP then Kozlov gives him a Battering Ram because they were really hoping a re-sprayed Khali was going to get over.

Tiffany is dressed as a Las Vegas show-girl and wants Teddy as Elvis because she’s the radio hole of the show. Swagger’s singlet makes it’s debut here but it doesn’t help him get a title shot against Matt Hardy. 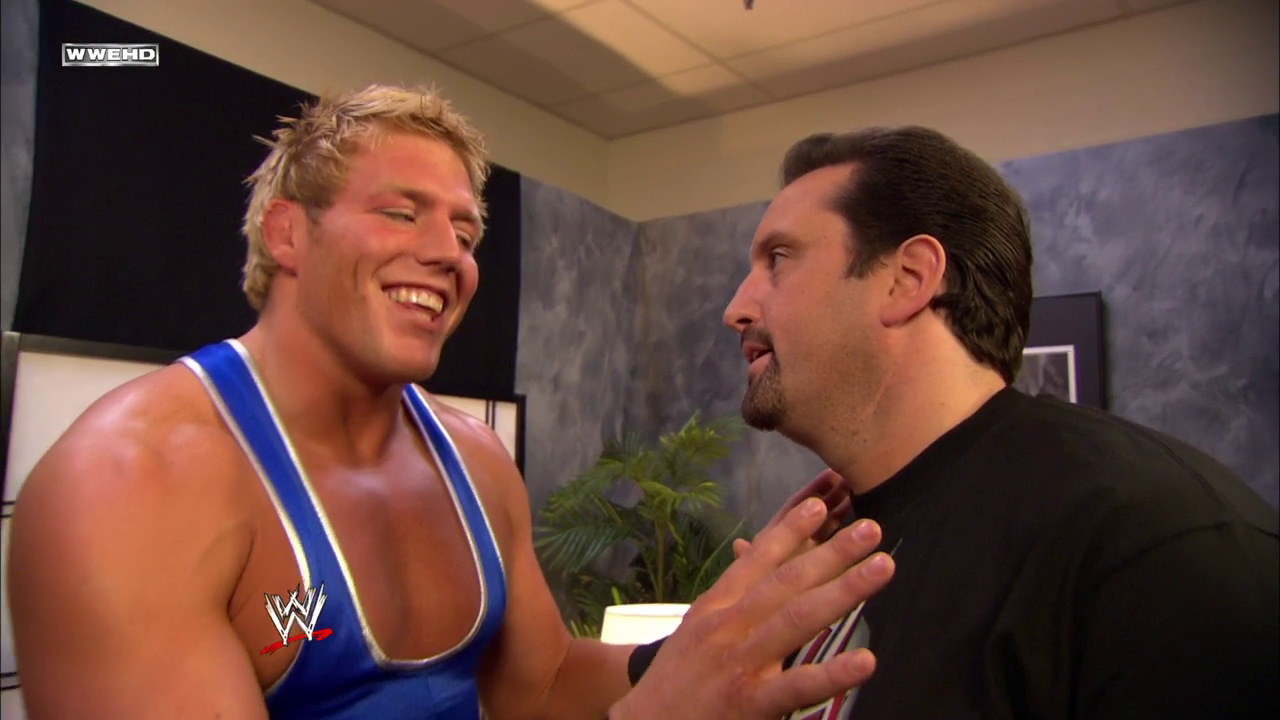 Tommy Dreamer shows up and Swagger tells him he’s here to make new memories not bastardize old ones. Swagger sounded like a star here, really.

You can vote for the special guest ref for the Batista vs. Jericho match but Austin’s one of the options so you wonder why they even bothered putting it to a vote. The BBC must have been managing the hotlines. 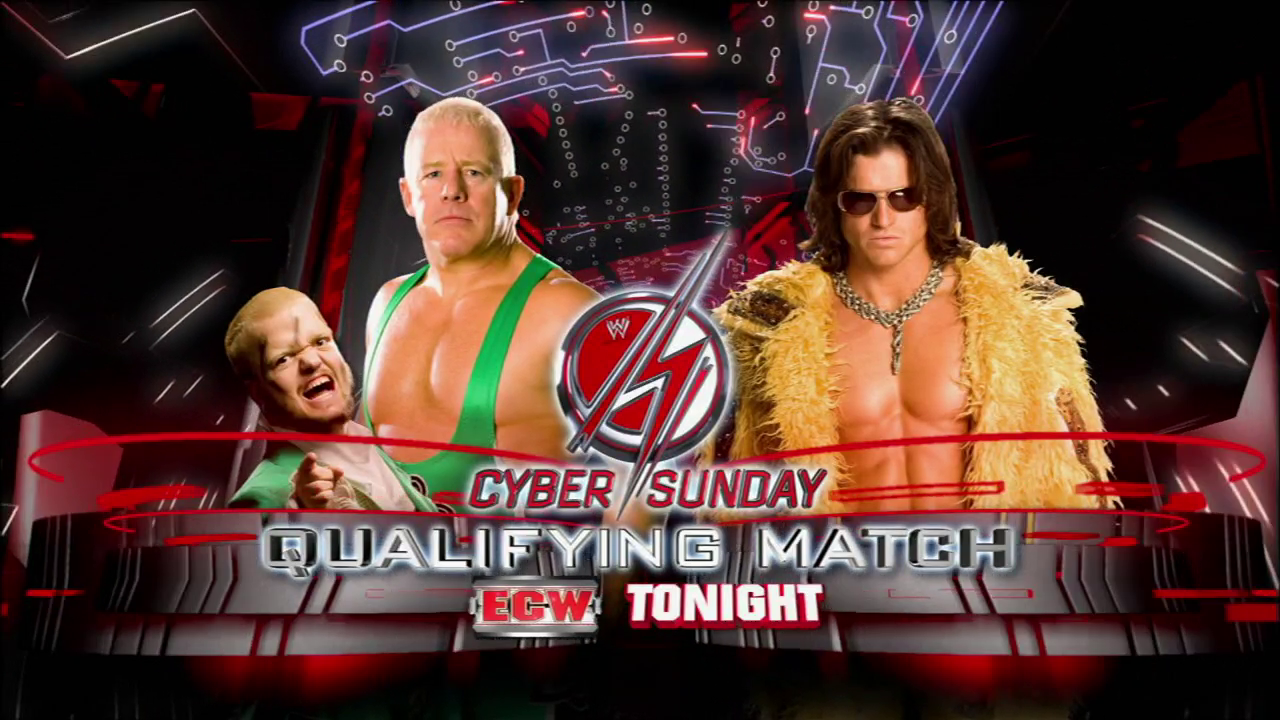 Striker brings up Halloween ideas, Grisham tells him to dress as a good commentator and look like him which is the best line he’s had all year. Weird choice for headliner as Finlay is a good guy only in the sense that he isn’t a bad guy. He pounds away on Morrison like Batista pounded away on Melina. Finlay stretches Morrison with a Single Crab for so long that the crowd chant REAL WORLD at Miz at ringside. Morrison gets the advantage and applies an armbar so the crowd assaults him with JOHNNY NITRO chants. Miz grabs Finlay’s leg so Finlay responds by launching Morrison on top of him. Finlay distracts the ref so Hornswoggle can dive outisde onto both men. ”That’s called a tope but in this case it’s a low-pe!” Hornswoggle escapes by going under the ring and Miz follows him.

When we return from break, neither sidekick has returned but Morrison has another armbar locked in. Finlay misses a charge and goes into the steel post, something he does nearly every match but he always flies at it with full force like a mad bastard. Morrison resumes offence and the crowd are getting bored by the lack of Miz & Hornswoggle. Finlay gets two from a backslide and then makes his own comeback with the Finlay Roll for two. Morrison escapes Emerald Fusion and connects with the backbreaker/slam combo but Hornswoggle returns. 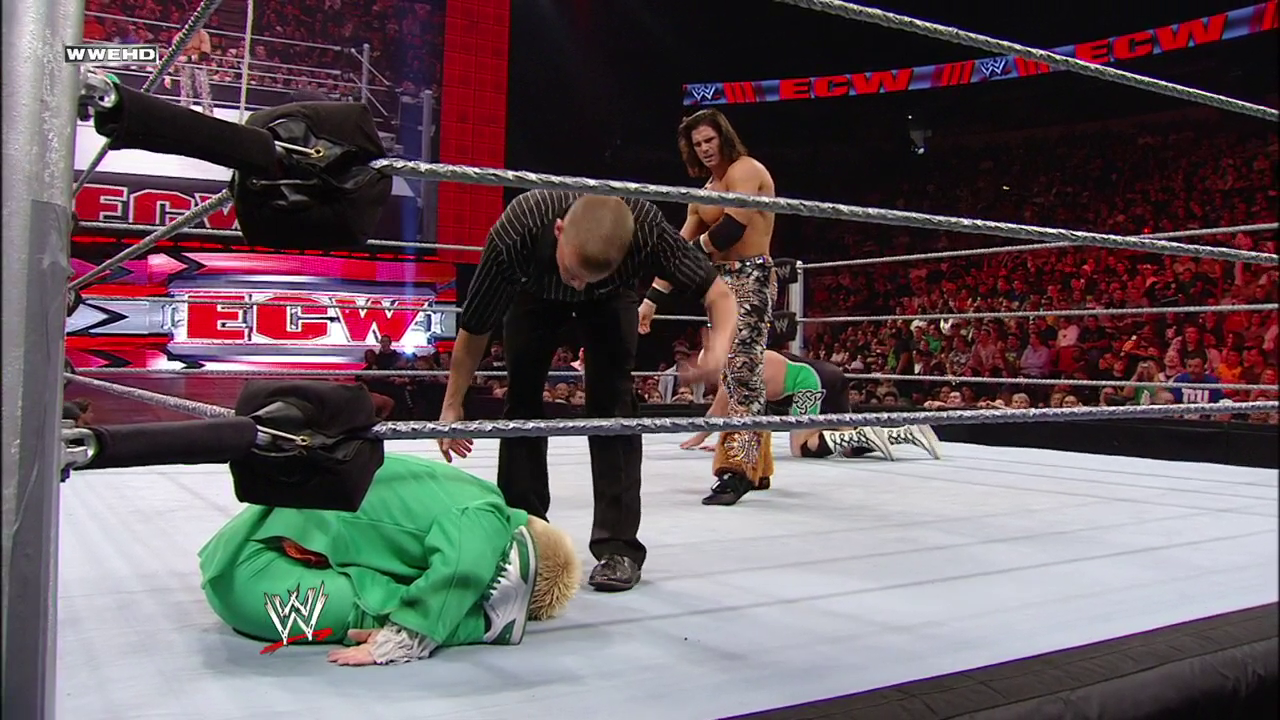 You can tell no-one was paying attention to ECW’s commentary as Striker says ”I don’t want to guess what he’s attempting to do” and Grisham laughs. Surprised he didn’t yell ”SHADES OF LANNY POFFO’.’ Anyway Mike Knox distracts Finlay so Morrison kicks him but that only gets two because Knox sucks. Finlay looks for his stick but Hornswoggle has his mouth full so Cryme Tyme (of all people) show up from underneath the ring to hand Finlay the shillelagh allowing him to twat Morrison for the win.

Winner: Finlay (The overbooking helped as the crowd were begging for something to react to and good guy Finlay by himself has less heat than a candle. Solid action but Hornswoggle getting beat up and the commentators ignoring it to imply he was blowing himself was the highlight.)

Finlay thanks Cryme Tyme for their help…by hitting them both and the show ends.

No wait, Henry shows up and delivers a World’s Strongest Slam on the stage and that is definitely the end.

Overall: Fun episode with Bourne vs. Chavo standing out and the brand working around the stupid gimmick PPV stipulations during this time by having Henry beat everyone up so no complaints after a few rough episodes.

I’ve been Maffew and I’m going to keep on doing these until at least 2010.