AJW Tag League THE BEST 1995 (Part Two):
* The second part of this tape (which starts off with an October show) sees the 1995 Tag League THE BEST Tournament end, as AJW tries desperately to put over some new stars. This is a very weird one, as we’re extra-close to the end for Lioness Asuka, Bull Nakano, Akira Hokuto & Sakie Hasegawa, which has severe repercussions for AJW. But hey, another ****+ Main Event! Good ol’ AJW!

-As expected, ASARI’s team does poorly. But I’m shocked that Kyoko & Manami’s teams did the best, since they’re teamed with midcarders. The teams below them would seem to hold a bigger advantage… and then there’s Akira & Shimoda in the bottom half! Like, what the hell is THAT? They’re the Tag Champs! They manage to beat Dream Orca & Aja/Takako, but all the other top ranked teams wipe them out. Orca seems to start fine, beating Sakie/Yoshida, but loses to Manami/Ito as well. But they do beat Reggie/Hotta, who beat Kyoko/Tomoko for their only loss.

Of course, looking at this list knowing what’s to come… the REAL purpose of this year’s Tag League is to elevate both Ito & Tomoko. Makes sense, as AJW blew 1995 trying to get Sakie over, and she is now hurt and doomed to retirement. The company probably realizes it needs to elevate Ito & Tomoko NOW and this is their way of doing it. It’s kind of transparent, actually- like this palpable sense of “OSHIT we wasted all that time on Sakie and now we have to make do and act like the other two are on her level!”.

Now we hit the portion of the show from December! Two months later, the rankings have sorted out and we get a 3rd Place Match and the Finals. 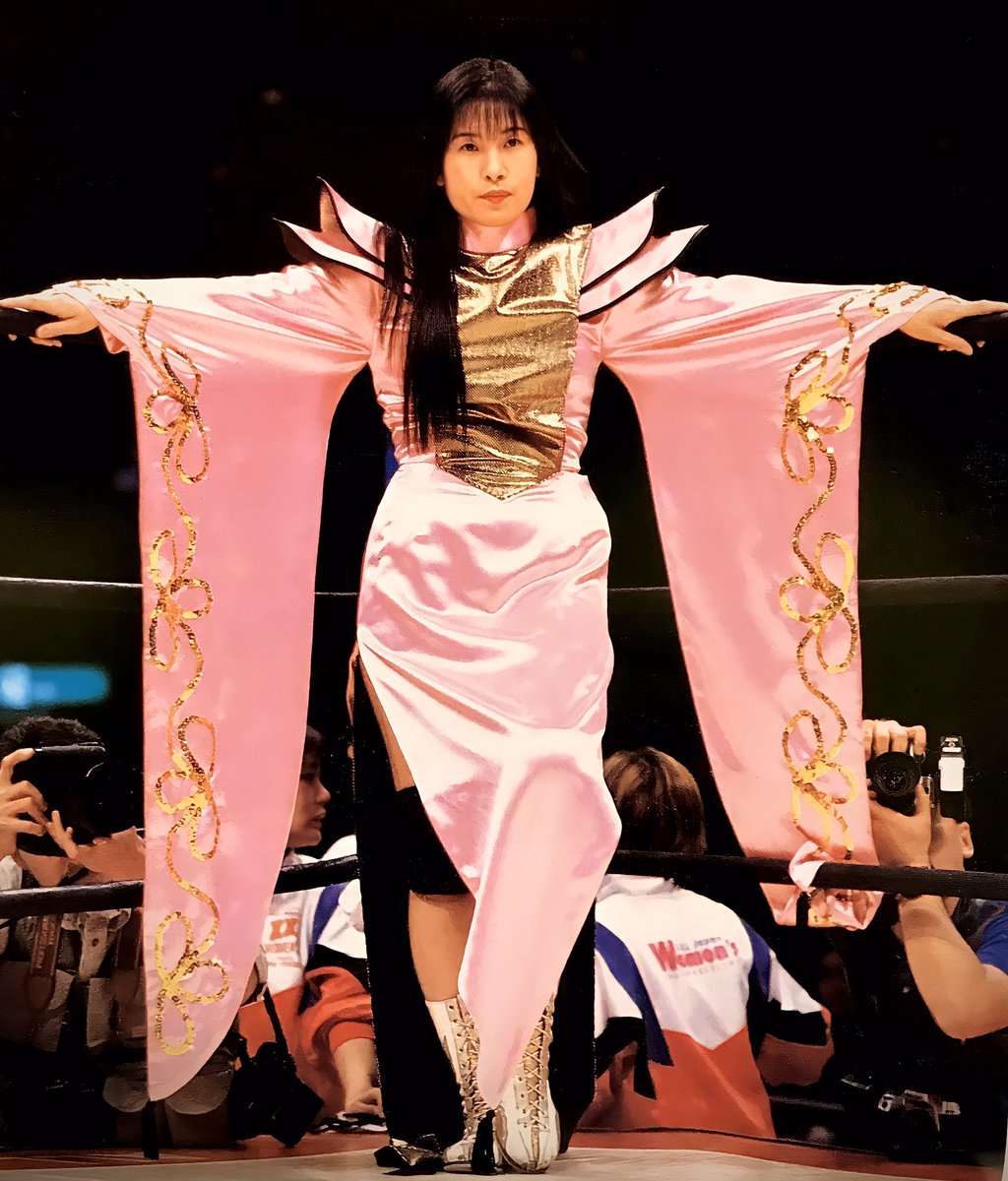 Can Manami Toyota successfully come out on top of a year of World Title switches? Read on!

AJW MONDAY NIGHT SENSATION:
(Dec. 4th 1995)
* It’s time! JWP’s Dynamite Kansai won AJW’s WWWA World Title in August and has held the rival promotion’s World Title ever since! Takako Inoue took a shot at her, but had no chance and was beaten- but now Manami Toyota’s year-long storyline comes to an head as she takes one more shot at the Gold! So in the year preceding this, Manami Toyota lost a classic match to Aja Kong at Big Egg Wrestling Universe in the Tokyo Dome… but months later, she took another shot and actually won the Title! But then she went to a 60-minute draw against Kyoko Inoue and then failed her very next challenge, as Aja won her Title back. Along the way, Manami took several failed attempts at the WWWA Tag Titles with Sakie Hasegawa as her partner, then had an insane pair of matches against Akira Hokuto (a ***** classic) and Yumiko Hotta (possibly Hotta’s greatest match, nearly getting the same rating) in which Hotta tearfully insisted Manami bring their Gold back home.

The rest of the show is a bit peculiar, as it’s very rookie-focused, with the first three matches featuring them in prominent positions. Then we get a lot of “establishing” matches, as it’s Tomoko/ASARI, Sakie/Ito, Takako/Reggie, Hotta/Yamada & Aja/Kyoko in bouts that seem designed to showcase the bigger stars and where they are in the pecking order. This entire show honestly feels like “So Here’s Where We’re Going”, with a lot of potential up & coming stars. Of course the Ringstarfield account I’m getting these from spoils nearly every single result, making that even more clear, haha.

The other insane thing is the vast majority of matches here are SHORT- kept to about 9-11 minutes apiece, which is just over half the length bouts of great importance would be. Only two matches on the card are left going longer than that and it’s the top two. That’s very unusual for AJW in general and I wonder why that is.

This is, bar none, the greatest gear in wrestling history. She looks like a goddamn SUPER-VILLAIN.

-One of the unsung heroes of Joshi would be Mariko Yoshida, probably most notable to Western fans for having almost the exact same name as Wolverine’s lady-love for about a decade, one Mariko Yashida. This is most likely a coincidence, though Yoshida’s real family name is apparently Morita. Her biggest contribution to Western wrestling might be the creation of the Air Raid Crash, an over-the-shoulder move where she drapes the opponent across her back, cradles a leg and their neck, and drops down in an Inverted DDT hold. It was swiped by Mike Modest, appearing prominently in Beyond the Mat (Jim Cornette marks out upon seeing it). This devastating-looking move is STILL a big maneuver, and is currently used by AEW’s Britt Baker, among others.

Yoshida was surprisingly one of the most interesting workers in 1992 AJW (with only four years in the biz at that point), using Lucha Libre-influenced stuff to great success- her sunset flips, quick runs up to the top rope, and more led to a very good “come from behind” rookie style that made flukes seem like a constant threat. Hilariously, she uses a friggin’ Super DDT as a mere “prelude to the big stuff” move, as it had zero credibility as a finisher. – Rookie Yoshida in 1992 was one of AJW’s top eight best wrestlers easily (possibly behind only Bull, Aja, Akira, Yamada, Manami & Kyoko). Her future seemed bright, before a horrible neck injury put her out for nearly two years.