. @HulkHogan BOO HOO HOO so sad! WE DO NOT CARE! @RusevBUL will #CRUSH your precious @JohnCena & then take your #WWEHWTitle. — LANA (@LanaWWE) November 5, 2014

Yeah, you tell ‘em, Lana.  Well, except that Brock Lesnar is the champion, not Cena, but the SPIRIT is there.  Nice to see someone actually embracing the old school heel mentality and going all the way with it. 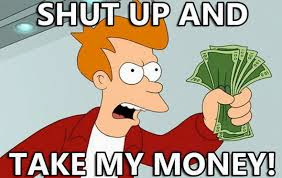 Jesus, WWE is sucking up hours of my life with their YouTube channel now.  I`d disagree with putting Punk’s win as high as it is, especially because the MITB show was much bigger for him and the ADR match was pretty middling stuff for a main event.

I came up with a pretty cool idea. What if Sting won the title from Bully Ray tonight? Sting then announces on the next Impact that he wants to vacate the title and not compete for it anymore because he did what he needed to do and got the power away from the Aces and Eights. Hogan then makes the Bound For Glory Series for the vacant TNA title. Bully Ray uses his rematch clause and Hogan puts him in the BFG series. Guys in the BFG series would be all TNA guys including: Jeff Hardy, AJ Styles, James Storm, Austin Aries, Bobby Roode, Samoa Joe, Kurt Angle, Christopher Daniels, Matt Morgan, Abyss, Jay Bradley (via winning tonight @ Slammiversary), and then Bully Ray from Aces and Eights. Gradually over the summer, the Aces and Eights members start leaving + turning on Bully Ray potentially costing him matches eventually leading into the evaporation of Aces and Eights. The BFG series would have stellar matches with that lineup plus it would make every match very important which could help sell tickets to house show events.
I think this is a much better plan than the Bully Ray vs. Hulk Hogan potential bout. The TNA title would be vacated for the second time going into Bound For Glory with my plan, but can you imagine if Hogan were to win the title, who would he lose it to? He'd probably vacate it anyways and make a tournament.
I don't mind the concept of the BFG series being for the vacated title, but the problem is that stuff is decompressed enough as it is on this show, and that would mean no champion from now until Bound for Glory.  That's a REALLY long time to go with no one holding the title.
Plus I think where they're going is Bully holding the belt until BFG, building up to defending against Hogan (who would be inducted into the Hall of Fame that night) and Brooke screws Hulk over for the big swerve, to REALLY kick that Aces angle into a higher gear.  This time, for REAL, yo.  That's just the vibe I get.  But we'll see tonight which tiny steps forward the storylines take, I guess.
http://the-w.com/t/47262#504707
I'm not gonna just c&p from the new Observer because if I was Dave I'd hate for people to do that, so I'll throw some hits CRZ's way instead.
Clearly, Tanahashi had a hell of a year and actually got me to watch TWO New Japan PPVs on the strength of his matches, so that's an MVP in my books.  Congrats to Bad Influence on a well deserved Tag Team award, and I'm a little weirded out by TNA winning worst promotion but Impact winning Best Show.
So yeah, no major quibbles here.

———- Forwarded message — http://www.wrestlinginc.com/wi/news/2012/1127/558276/daniel-bryan/ I KNEW these things weren't legit! ——————— You know, I just found out that Restaurant Stakeout and that other hidden camera show on Food Network are staged, too.  So its been a rough week for our illusions all around I guess.

Here’s something for discussion.   Pick someone to send from WWE to TNA and one to go from TNA to WWE and the move is the best for both companies and the wrestler’s career.

TNA to WWE
Matt Morgan – Sticks out like a sore thumb in TNA, and they wouldn’t have to try and throw him into random tag teams to justify his spot.  WWE screwed up with him the first time, but the stuttering thing is ancient history.

WWE to TNA
Evan Bourne – WWE doesn’t care about any of the strengths Bourne has.  In TNA he is tailor made for the X-Division and has a ton of friends in the company.  I could see him with a tag run and maybe some world title shots.

Well, Morgan is already happening, so get ready now.  They're just waiting for the lawsuit thing to blow over, basically, but he was pretty much going to debut a few weeks ago and now can't thanks to Ric Flair.  My alternate pick would be AJ Styles (although it would realistically never happen) because they can instantly plunk him into feuds with D-Bry or Punk and he'd be totally fine there.  I think Bully Ray could have another singles run in WWE with this character, too.
Going the other way, Tyson Kidd is the obvious choice for me, but he's basically living his dream right now and I wouldn't want to take that away from him.  The Miz would be a great choice, because he could bring media cred their way and could work the big main event style they need.  Ditto John Morrison.  I think Ziggler and Swagger would fit well there too.  Especially if Swagger joined up with Angle as his All-American stooge.

Ok Scott let's assume your right and HHH wins at Summerslam and Vince only brought him back to job for the stars. What would be the point of a big WM match with Taker or Rock if Brock hasn't won a match going into WM? A dominant win for Brock could also set up a title match at Survivor Series vs Punk or Cena, which I think would pop a nice buyrate. Maybe Brock wins the title and holds it hostage until he comes back in 2013, just a thought. EM

Sorry, I had to remove your awesome font this time.
Anyway, you're thinking of this far more logically than they would be.  You could make all the same arguments about this match as you could with the Cena match, and Cena still won.  I'm not saying I have any inside info on who's winning or what plans are or anything like that, but just based on 20 years of watching HHH be HHH, I think he's going over just because he CAN.