I dug around for this one. US title on the line here, and if anyone from the WWE Network is reading (and why wouldn’t they be), THIS is Video Vault worthy.

Scott,
Watching a lot of early 90s WCW on the network and man Terry Taylor was a great wrestler, a guaranteed 3-star match maybe higher depending who he's in with.  Was there ever a guy more stigmatized by one gimmick than poor Terry?  He puts on a 4-star match with bobby eaton and all I think is Red Rooster!   Was there anything any company could do to save him from low-mid card life?

First up, I went out of town this weekend and apparently killed Jesus.  Hopefully he'll be back tomorrow.

Second, Taylor was never really the same after a car accident that tore up his gut.  I think mid card was a fine position for him, but not as low as the Rooster.   The York Foundation run was the perfect spot for him, I think.

Bizarre pairing again. From 05.20.89, Terry Funk vs Eddie Guerrero. Right in the middle of the Funk/Flair feud. Eddie still has his rockin’ mullet.


Man, that’s crazy.  I barely even knew who the other Guerreros were at that point in time.

I remember this one!  And yeah, it was pretty good, even though Taylor was not giving much of a crap at this point.


Quite possibly the weirdest match I've ever stumbled upon, but
probably par for the course for the weekly PPV days of TNA?

The match actually makes sense within the storyline — Punk and Dinero were Raven's flock, they turned on him, and Raven recruited Funk to help him get revenge.  Pretty decent brawl too, although short-haired Raven always looks wrong. 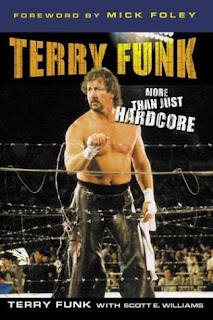 I like to think that there are certain subsets, certain ratings, for certain wrestling books. The highest level of wrestling books I like to refer as the pantheon of books. Mick Foley’s “Have A Nice Day” is certainly in that pantheon. Both of Chris Jericho’s books are there. Bret Hart’s “Hitman” is at the very top of the pantheon to this writer. As much as I may gush about them, Edge’s “Adam Copeland on Edge” and Tom Billington’s “Pure Dynamite” just miss the pantheon. Terry Funk’s “More Than Just Hardcore”? It is firmly in that pantheon.

Terry Funk. Where does one begin here? The man is one of the ultimate legends of the sport, someone who has been described as if not the best ever, one of the best ever. Mick Foley, who writes the foreword to this book (that seems to be his official job description these days-wrestling biography foreword writer), calls Funk “The Greatest Wrestler I Have Ever Seen.” Granted the two share a great…and almost unnatural…friendship, when viewing the entirety of the career of Terry Funk, that statement by Foley does not seem like hyperbole.

Whereas the last book I reviewed, on Jimmy Snuka, seemed to portray Snuka as humble in SPITE of the damning facts it presented, Funk’s book is down to earth, refreshingly humble, and seemingly honest.

Funk obviously got his start in wrestling due to his famous daddy, but that fact did not define Terry Funk. Where his brother Dory (or Dunk in this book) seemed to emulate his father to the Nth degree, Terry had a style uniquely his own. Terry was a wildman. The early parts of the book describe his experience at West Texas State University, a total wrestler factory. Dick Murdoch. Frank “Bruiser Brody” Goodish. Ted DiBiase. And on, and on. The early parts of the book are good, but can drag a bit at points. Until Funk starts talking about Virgil Runnells, a.k.a. Dusty Rhodes. Funk loves the guys, but, like Al Snow in Foley’s books, Dusty provides (some) of the comic fodder in this book. Particularly, Funk’s depiction of the infamous Dusty lisp. Funk recalls a day in 1965 when he had just purchased his first car, and young Dust was working as a gas station attendant. Terry stopped at his pump, Big Dust took one look at the car, and said, in Dusty speak, according to the Rosetta Stone known as Terry Funk:

And that Dusty gag runs throughout the entire book! Everytime he gets to Dusty, for as good, no, great a talker he became in the business, I cannot help myself but laugh at Funk’s description of Dusty’s lisp. Its tremendous.

Funk is remarkably candid about, well, just about everything in this book. He relays his run as NWA Champion and how he became worn out by the travel obligations. He describes the feud with the Briscos (no, not the ROH ones) and how much animosity was there between the four feuding brothers, although Funk tends to take the high side, the lighter end.

Funk has a great mind for wrestling, so his descriptions of how Vince took over America, and how Baba and Inoki took over Japan are absolutely enlightening. Trust me, you may think, THINK you, as a smart mark, know EVERYTHING that has happened, but you, and myself, do not. Funk’s book is one of those you have to keep an open mind to, not immediately deride something as FALSE. I have this feeling that a guy like TERRY FUNK would know better than me or any readers, barring some really smart and connected people. Christ, with that comment, I just led myself to Sergeant Slaughter.

Listen, Funk is not necessarily 100% here. He has some lapses in memory that some of us assholes….I mean, smart marks…will kill him over. Read the book and find them yourselves, I am not exploiting them. But Funk is generally spot on, and his views on wrestling are EXCELLENT. I am talking his views on booking, how to work, psychology, how to cut a promo, the works. THAT is the excellence of the execution of this book. Funk bares his soul, his heart, and his prodigious brain for the sport…within reason.

If you read this book, you really feel like you are, as Mick Foley described in his book, sitting under the Funk learning tree. Its unreal. He effortlessly goes from explaining why a wrestler should or shouldn’t do this or that with an amazing parable to comically telling a story about a rib, or a funny scenario. It is uncanny.

I don’t want to delve too deeply into the book, as you may ascertain by this point. It is too good of a read for this hack writer to do it justice. What I hope is that you, as an educated reader, will do yourself the favor, and take it upon yourself to read this master work. Think that is a typo? READ. THIS. MASTER. WORK. It is arguably the best work Terry Funk has put forward, and that is some lengthy praise.

Plus, it includes his rationale for this:

Here’s one that really puts Mark Henry into perspective. From 1998 Mark Henry vs. Terry Funk, not a 5 star classic by any means, but a damn fun match.

I was wondering if you had any thoughts on who you think was better between Terry Funk and Randy Savage. I think it's an interesting question for a number of reasons: both great on the mic, both great babyfaces, both great heels, both great workers (could work the technical style well while also being able to work a distinct style of their own; Funk as a brawler, Savage as a high flyer), both drew money for many years (Funk more so in Japan, Savage certainly in the US), both highly regarded by their peers. To the best of my knowledge, I don't think they ever worked each other.

It may just come down to personal preference because these are all qualities you would look for in a wrestler – especially when people get into 'greatest of all time' talk, but I just wanted to get your thoughts. Maybe if you find this as interesting as I do, this could be something you could spread over to the board.

Obviously I'm biased since Savage is one of my favorite wrestlers ever, so I'd go with him. I think Savage drew money on a much larger scale than Funk, although Funk probably did so over a longer period of time.

This was featured in the latest Karl Stern classic wrestling podcast and I had to go look up the original footage on Youtube.   I nearly lost it on two or three occasions listening to Terry Funk absolutely put on a clinic on how to do a hilariously effective heel promo.  If you can get through the rant about Jackie Fargo and how he’ll forget what comes after “two” (because he’s so old you see) without laughing your ass off, you’re a better man than me.  Tell me that any promo on RAW in the last year was better than this one, and you’re a LIAR.

Hi Scott,
In the attitude era, why did the WWF decide that Chainsaw Charlie would be a good character for Terry Funk?
Wouldn't Terry Funk (as Terry Funk) have given The New Age Outlaws even more of a rub?
Thanks.

I think that Foley talked about it in his book and said it was Funk's idea, but I'm drawing a blank at the moment otherwise.  Anyone else remember?