Skip to content
I’m not one to get too carried away with fantasy booking, but two key situations/rumors from 1987 had me thinking…
If #1 is true, then what were the long-term plans for the belt? Feuding with Savage through the summer? Does Savage still get the rocket push into the #1(B) babyface role with Hogan about to start taking time off every year? If #2 happened the other way with Reed winning, where does that leave Honkytonk Man? Does he become a flavor-of-the-month villain for Hogan before being knocked back down the card, or does he just ride the midcard train facing other non-title threats like Roberts and Ken Patera? Then what of Butch Reed? Was he that hot of an act to put the title on? In storylines he helped end the career of Superstar Billy Graham later in the year, but other than that, he seemed to have an uneventful run.
​I think that pretty clearly Steamboat was only intended as a transitional champ for SOMEONE, be it Reed or whoever.  Even without his time off he wasn't the kind of guy that Vince was gonna push any harder.  Reed at least had the look and enough cred at that point where he could conceivably win it.  Plus Vince apparently thought that the bleached blond hair on the black guy was hilarious.  ​
​A lot of it seems to veer towards the obvious (you mean the movie and TV division WASN'T a great idea?) but I didn't realize that Total Divas was such a money sink. ​ 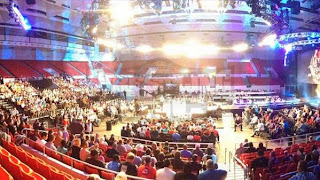 > hey scott, look at this pic from this week's Impact tapings:

#wweuniverse you will never believe this!I just got off the phone with #jerrylawler and he is alert and in great spirits!— Michael Cole (@MichaelCole) September 13, 2012