> Hey Scott,
>
> Loyal Blog of Doom reader and occasional poster. Love the site, of course.
>
> I was thinking about past Wrestlemanias and examples of when WWE used the event to create new stars.  One of the first matches to come to mind was Rick Rude beating The Ultimate Warrior for the I-C belt at WM IV.  At the time Warrior was red hot, still basking in the glow of the HTM squash the previous summer.  Although he held the belt for a healthy 7 months, others (Savage, Santana, Honky himself) held it much longer previously. Warrior was clearly an up-and-coming star snd feeding him to Rude risked killing his momentum dead.  And although you could argue giving Rude the belt was creating a new star, the plan was simply for Rude to drop the belt back at Summerslam.  So, bam, instead of having two up and coming stars, you have the dreaded 50-50 booking of two guys with major PPV losses (to each other) on their records.
>
> Yet somehow both guys emerged from this feud stronger than ever despite the mutual jobs. It definitely helped when WWF began putting Warrior over Andte in 90-second squash matches on the house shows and pairing Rude with Piper on the opposite house circuit, but still, you had two guys survive big losses and move up the card.  It was perfect, almost the complete po site result you see these days when two guys trade non-decisive wins and wind up no better than where they started from.  Any idea how this worked, other than the sheets talent and/or charisma of the two guys involved?
>
> Yeah, actually it used to be the rule.  Basically you'd have Killer Khan come in and destroy his way up the food chain from Pedro Morales to Koko B Ware to Brutus Beefcake and then finally the program with Hogan around the horn.   He'd make money and get the rub (especially if there was a big SNME blowoff) and then he would go back down the ladder in reverse on the way out.   Job to Beefcake, job to Koko, finally job to Pedro and leave.   You've just spread the Hogan rub over four guys,  and everyone ends up a bigger star.   Somewhere along the way that got perverted into skipping the vital middle steps and just trading wins right away.

Thought you may get a kick out of this. A "Jacques Rougeau" promo for a match in Ottawa in November 1992 (which didn't happen because Rougeau quit well before then), with the Mountie moniker excised after the RCMP got involved.
Did you have any recollection of these promos? I don't know the time-frame between when he had to go by Rougeau exclusively in Canada and when he left, but it couldn't have been long.
Weird, I have no memory of this.  I thought he just disappeared after the Summerslam period.  Could have been that he was only doing local shots around Ontario and Quebec, because he certainly wasn't out as Rougeau in my neck of the woods at that time. 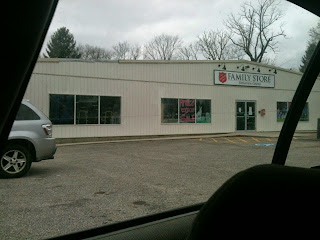 So I’m currently in the parking lot of a thrift shop as the lady I’m with browses through literally decades of clothes and fashions and stuff dead people wore.

As someone who was once offered Roger Ebert’s wardrobe – I feel weird wearing pre-worn clothes. Who knows what kinda karma they’re packing, ya know?
But I do love pawn shops, thrift stores and yard sales for cool electronics, having found a cheap air hockey, table awesome speakers, and rare games like “Fat Chance” (don’t ask).
So what are you favorite second hand finds / deals? Ever find a rare album, game, book, or DVD? Maybe you scored a pool table for six bucks and a stick of gum?

Here is a match that took place on January 22nd, 2002. This was from the same taping in which AJ wrestled the Hurricane on Metal. AJ was offered a developmental deal after the taping but declined, as he did not want to relocate with his wife in college. Anyway, the match is pretty good and it was not hard to see why the WWE would offer him a deal after the tapings. It also shows you how they absolutely wasted Rico when they recalled him to the roster as a stylist.

Here is the dark match from the June 3rd, 2002 RAW tapings, which featured Shelton Benjamin vs. The Prototype (John Cena). Good showing by both guys, especially Shelton.

not great, but worth a look
Now there's a morbid list that could be done.

Hey, Scott, check this out. A Battle Royal match for unknown promotion from 1995 featuring Cactus Jack, Disco Inferno, RVD, Van Hammer, Scorpio, and Scott Flamingo but he’s wearing the Raven attire. I thought it would be interesting to share
http://youtu.be/5UYS2dM32Xw

Well you know I love battles royale.
Scott,
In the spirit of the rare matches you share with the Doomers, I have one that I'm not sure has been posted: Macho Man and The Body as a duo
http://www.youtube.com/watch?v=qWVycX9wv6g
Top notch work there.
Scott,
Came across this site of rare wrestling promotional graphics for matches (many of which never ended up happening) and thought you'd like to see it
http://rarematchgraphics.blogspot.com
I definitely remember seeing the Hogan/Flair one on TV before they did the switcharoo.  Very cool site.
Here's a pretty interesting historic article from the wwe.com crew about rare titles from the '70s/'80s:

A good read for those of us who didn't get into wrestling until the '90s.

And, there's a clip of this Jumping Bomb Angels/Glamor Girls tag title match included in the article:
http://www.dailymotion.com/video/x54slb_royal-rumble-1988_sport#.UUt4fVfRP-s

I was fairly surprised at how good (great?) it was considering it's a WWF women's match. Might be a good match of the day candidate for the blog.

As a belt mark, that was some good stuff.  And I kinda love that there's an actual backstory to the mysterious Rio De Janeiro tournament that created the IC title.
And yeah, that tag match was YEARS ahead of its time.  Blew my mind back in 1988.