Skip to content
I'm excited for the big guy to come back. I've actually wondered why he hasn't come back sooner. So Yay Batista! That being said, isn't it sort of wasteful to have him comeback and his debut match be the Rumble?

First, he's a returning big star and should be a draw by himself. "I get the Rumble AND Batista is coming back for a match?! Well that's great." said everyone at once. Batista comes in, destroys anyone, everyone cheers.

But since he appears to be in battle royal, There are two outcomes. Either he wins it, which I don't feel is necessary. Everyone believes him to be a player and he's cemented in the upper card. It also robs a potential upcoming star from rising a bit higher. Be it Punk, Reigns, Bryan (oops), Wyatt, Big E. whoever. In addition, if you want him to have a title shot, it's not like it's that hard. Cena didn't have to win anything to get a shot at either the World or WWE championships. He just sort of wandered out from backstage.
The other option is to have him be eliminated which doesn't exactly count as a loss, but isn't exactly a strong return of a monster. Particularly one signed to a year long deal with one last run on top.
So what the hell?.. I guess…is my question.
I'm just curious how they're gonna work in Cena/Orton, Cena/Orton/Brock and (winner of Cena/Orton/Brock) v. Batista all within the confines of Rumble/Mania season and not have the belt bounce around a bunch of times in the process.  Current track seems to be Batista winning the Rumble, beating Del Rio at the Chamber, and then beating Orton at WM for the title.  Since Brock is against Big Show at Rumble (ugh) and then faces the champion at the Chamber, I would guess that means a Cena-Orton-Brock three way there?  At least that match has never been done before.  Brock-Batista seems like a huge money match just sitting on the table, though.
So I dunno.

So I am working a crazy ass busy holiday season at a very populated mall, one that I more or less feed as the rest of the stores deal with the unwashed undead masses looking for their Stop Touching Me Elmo dolls. The thread here is obviously South Park. What I want to know is this: Where do you rank the last 4 weeks of South Park in the pantheon of great South Park episodes? Personally, I found it utterly hysterical. It was weekly episodic television that I made damn sure to DVR, unlike a certain Monday night show that I have all but given up upon after twenty years of devoted viewership. But here are the two questions: How do you view these “Black Friday” South Park episodes, and what is YOUR favorite South Park episode all time?

Well, its been a fun few weeks you Bag O’ Dicks (BODers). Just to fill you in (and yes, I have been able to snag a certain said someone and fill her in) I just picked up two new fresh shiny wrestling books: Gary Michael Cappetta’s “Bodyslams” and David Shoemaker’s new s---…which, from thumbing through a few chapters, is just fresh to death. So anticipate reviews of those right after or during the holiday season, depending on my mood after having to basically live in a Holiday Inn Express for a few weeks. (You know I am gonna crush that mini bar).

Anyway, my question, non wrestling related, is this: I recently picked up Eminem’s new CD, MMLP2, and think it is hot fire like Dylan. As a recovering addict, naturally “The Monster” speaks to me, as does “So Far”, “Rap God”, and “Love Game.” Question is this: What is your opinion of the album and what is your favorite track? 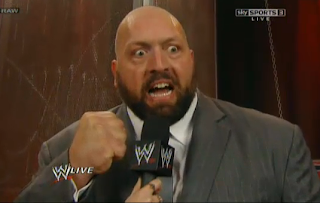 I am going to warn you: this is going to be a fairly long question that may lead to some fun. Or I can only hope. Hopefully as fun as that face Big Show made a few weeks ago that almost made me dampen my trousers in laughter. Seriously…that is the best work Big Show has done in his entire career…even better than turning purple laughing in “The Waterboy.”

To the point: Most know my background here, so I give you this little anecdote into the life. A few days ago, I met a girl (not the one I work with) who works right around the corner from me, lives in my town, takes all the same public transportation as me, and is very much like me. Always has her nose in a book on the bus or train, same upbringing, age bracket (she is 25, I am 33…so more or less) and, to boot, is incredibly attractive (to me at least). Plus, as am I, she is a smoker. Yeah, I know, smokers are jokers, but hear me out. For a few days (well, actually, weeks) we have been talking, and I am slowly making the casanova moves, trying to get all I can out of her before I can get ALL IN HER (if you will) and tonight was to be the finale…when I ask for the magical digits. But when we both get out of work, she has a box of Pampers in front of her…so I know this is going to be interesting (not that I am not a fan of kids…as long as they are related to me or a piece of ass I am tagging). We shoot the s--- for a while, and then the hammer hits…she has danced around this magnificently for a week now, and picks this moment to bring up her boyfriend…who also happens to be in a motorcycle gang. How deliciously white trash. Anyway, she drops this on me (I think she saw where I was going and wanted to gently let me down) but I remained upbeat and as humorous (Hugh Morrus?) as I could. As we were parting ways, as she is getting her ride home (not from me tragically) and I am ready to hop on my bus, the rest of my crew from work come out of the Plaza and start pumping me up, saying s--- to hop up my ego and make me look good (those guys are awesome) and while paying absolute zero attention to the girl, I went into hyper comedy mode with my guys. She was listening in the background and laughing at every corny f------ punchline I was throwing at them, and I left 5 minutes later laughing to myself for the spectacle I put on.

So after all that happy horseshit, here is my Query of the Evening: Do I try to smash this chick just once, or leave it be, and let her be drawn eventually to me (HA!)? Or do I just move on, stay cordial with this hometown hottie, and plant seeds for the future? I know I am asking members of a WRESTLING website this question, which is almost like Dr. Drew asking Artie Lange for advice, but I figured it was a unique scenario and that I would throw it out there. What should this recovering addict do? Have fun with this one.