Game:  Outlast,
Developer: Red Barrels
Platforms:  Windows, PS4, Xbox One,
Did I Pay For It: No
“Horror. Horror has a face, and you must make a friend of horror.
Horror and mortal terror are your friends. If they are not, then they
are enemies to be feared. They are truly enemies.” – Walter E. Kurtz, Apocalypse Now

There are people who like horror movies and games, and those who don’t. Those who don’t
develop a utility belt’s worth of ways to avoid looking at the screen when a jump scare or gross-out fest is imminent. This is not a good thing. It’s always better to open up our closets, check for monsters, and actually find one,
than it is to leave the door shut and let your imagination
churn through irrational fears and paralyzing contradictions for eternity.

Making a ‘friend’ of horror doesn’t make horror any less scary, just real. Understandable. Quantifiable. You can take action upon it. A lump on your left testicle is terrifying, a lump on your testicle that’s cancer is terrifying as well, but comes with a plan of action and some level of understanding of what’s in store for your twig and berries.

Which brings us to Outlast on Xbox One, a horrifying first person game taking place in a ‘haunted’ insane asylum, with a deliberate “Blair Witch Project” aesthetic thanks your character’s trusty handy cam. Some down-right horrid shit happens at
Mount Massive Asylum and by the time the game is over or you quit, you’ll be up to
your eyebrows in it.

You are Miles Upshur, a freelance journalist tipped off about strange happenings at this mental hospital by an anonymous source referred to as ‘The Whistleblower’. The setting seems a little cliched, but the game’s atmosphere and story is presented with a deft touch. Succinct, well written notes and memos from various employees and patients fill in the margins while major characters will haunt you in person, flick lights off and on, and generally terrify you in classic horror game style.

A good portion of the story involves
inhumane studies done on the inmates on lucid dreaming and the power our
unconscious mind has over our waking thoughts.Imagine how crazy you’d
be if you woke up one day to find the actions you carried out in your
most private of nightmares really happened. Imagine if you didn’t know
when you were dreaming or when you were awake, then imagine you’re being
manipulated by people supposedly trying to help ‘cure’ whatever mental
illness you supposedly have.

Playing Outlast is a vulnerable experience filled with
escalating apprehension. Your only real tool is a camcorder with a night vision mode that depletes the battery quickly. The camera is also used to highlight missions objectives and interactive objects, and recording specific events unlock little bits of exposition from your character.

This mechanic works in conjunction with various sliding, climbing, and jumping skills your character has, and while things never turn into a first person Mario Bros. you’ll be surprised how mobile Miles Upsur turns out to be.

He is not a very skilled fighter however, and there is no combat in Outlast. Step out of a hiding spot too early? Dead meat. Peek through a door (you can
open doors fast or slow, actually) and make eye contact with a crazy person? Run for your
life. If you get grabbed by a wandering inmates, you can fight them off by mashing a few buttons, but otherwise the game plays up its Blair Witch Project vibe and features a lot of running away and hiding from things you saw or heard and hoping they go away.

You will see and hear many things, and they will look great. Especially from the POV of that there camera. It’s surprising the
whole ‘found footage’ thing hasn’t been done in gaming, especially since
it works so well here. Being in a pitch dark room, turning on the
camera’s night vision, and finding yourself greeted face-to-face with
something you didn’t want to see – and never want to see again, is a
common occurrence  If you like horror games, this is awesome. If you
hate them, it makes you want to stop playing.

Outlast uses Unreal Engine 3.5 which blasts you in the face with awesome lighting affects. Light beams through a window and casts shadows on rotating, hung, corpses, there are faint blue glows from computer monitors and busted televisions – the game is a marvel to look at in the dark, light, or greenish hue of night vision. 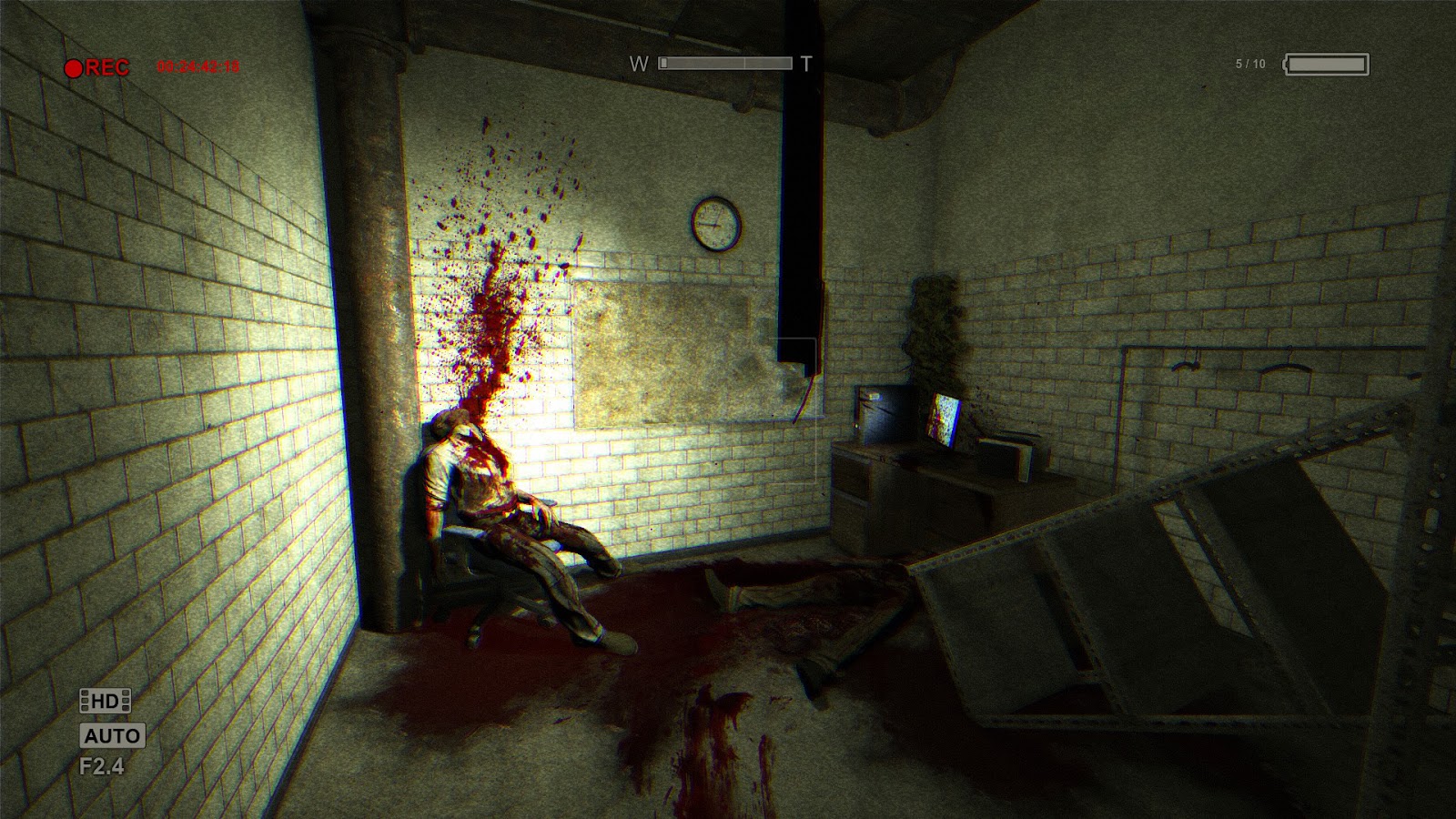 With the beauty also comes a narrative richness. Outlast gets points for the lucid dreaming stuff because it’s a real thing. The mysteries of what we dream about and why are endless, and
the fascinating nature of lucid dreaming – I.E the idea that you have
full control over the reality your mind presents you while in a dream,
generates questions and ideas and thoughts that can exist outside the game. It’s kind of like how Casino makes you want to learn how Vegas ‘really’ works, or how The West Wing could inspire you to be a politician or a lawyer or Jewish. Outlast prompts you to explore the stuff it’s talking about in a way not many other horror games do.

And many times diving into that stuff is as terrifying as the game itself. Which is to say America’s treatment of the mentally ill is…not great. Here’s a taste of what went on in my home town in the 60s. ‘Insane’ people were locked away, treated like dogs, poked, prodded, bullied and disregarded. A quote from the above link? “One “paranoid” patient, told he has shown no improvement, argues that
the prison is making him worse, not better. This sounds like the simple
truth, and the film leaves us with the impression that institutions like
Bridgewater are causing mental illness, not curing it.”

It’s also entirely possible I’m the only person on the planet who got to pondering about how to lucid dream, and the crappy shit we do to crazy people after playing Outlast. Regardless, it’s here if you wanna look for it, and what you’ll find is fascinating and soul-wrecking.

Also here is a really good, definitely scary horror game that does some new things well, and the stuff we’ve seen before done pretty good, too. The story is full of extractable nuggets about a variety of things, including a character obsessed with this thing: 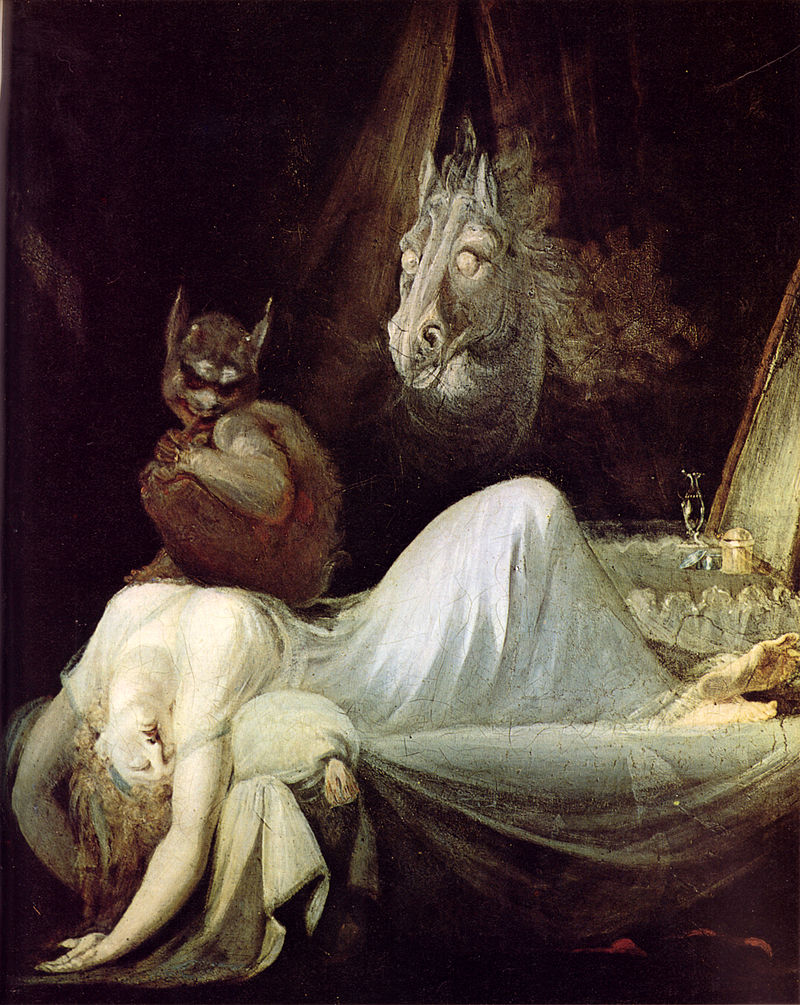 Outlast is game I would never buy. When I put that “Did I pay for it” thing up there a few reviews back, it wasn’t to show off and say “look at all the free shit I get” while wagging my internet dick in your face, it was to provide perspective. I would have never played Outlast unless it was sent to me, nor would I have dove into lucid dreaming, the history of insane asylums, or learned what in the blue hell that creature above this paragraph is.

Did Outlast change my mind? Would I buy it now? Probably not. It’s so good at doing the things it sets out to do, I didn’t ‘enjoy’ it. I’ve never found the fun in being spooked and terrified. Paying money for long stretches or apprehension that are paid off by bursts of true shock and terror, is not my cup of tea. Regardless of Kurtz’s quote, Life has enough horrors to befriend on its own, I don’t need my entertainment to provide them in bulk.

But I’m also not the kind of asshole to say that just because I don’t like something, it objectively sucks. Everyone has their taste, and clearly Horror is a popular choice for many people. In which case you could argue that the fact Outlast made me stop playing because it was ‘too scary’ could be the stuff box quotes are made of.

“This game made me realize I’m the pussiest pussy to ever pussy! 5/5” – MeekinOnMovies