“You know the Texas Tornado’s the only guy I know who can hide his own Easter eggs?”.
-Bobby Heenan on Kerry Von Erich

WWF SUMMERSLAM SPECTACULAR 1991:
* Did you ever know that the Orient Express once had ALL THREE members fighting in a match at the same time? I sure didn’t! Yet here it is tonight! I’m oddly more excited for that than anything else on here- another prelude to a big PPV, in this case being SummerSlam ’91. Also up: Hulk Hogan vs. Sgt. Slaughter for the WWF Title! Hawk vs. Brian Knobbs! Bret Hart vs. The Barbarian! Virgil versus a mystery man of Ted DiBiase’s choosing!

Vince makes a timely Annette Funnicello reference (who in their target audience would get THAT?) and Bobby Heenan’s in a ridiculous early ’90s “beach bum” get-up. Some douchebag fan has a whistle and they blow that sucker REPEATEDLY at certain points during the show. 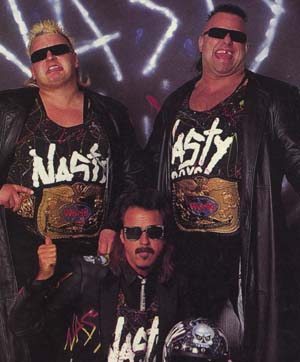 The Nasty Boys: The Rocksteady & Bebop of the wrestling industry.