What do you think are some of the best/worst feuds that never got a proper blow-off?  I will start the bidding with Bret Hart vs. Steve Austin (’97/’98)

If we’re being serious, I guess I’d imagine the NWO stuff in WCW is a big one. That just sort of petered out, right? It never had a big blow-off where WCW won? 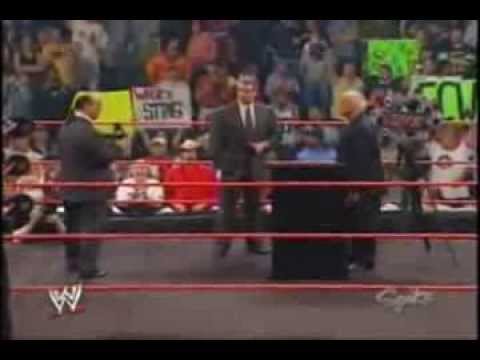 A REAL Vince Vs. Eric Vs. Heyman feud
I think Eric Bischoff  vs. Vince was money waiting to happen but never really materialized in the proper way, though there was the “announce table near the entrance ramp” era.The ECW Reboot seemed like a great opportunity, but save for a shoot promo or two, it seemed that Vince – a guy happy to get his REAL ass kicked, was insecure about letting his precious WWE appear weak or vulnerable – perhaps due to possible stock implications. 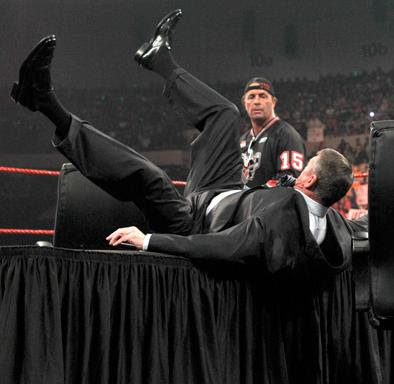 Bret vs. Vince
Also not to turn this into a make fun of Bret Hart thread, but I really, really, really, really, really, really, fucking really, hated Bret vs. Vince at Wrestlemania. I may have told this story before but everyone I talked to that weekend was stoked for that match, based primarily on what Shawn was able to do in his ‘big return’ at Summer Slam. Bret was obviously going to be limited, but I guess I, and people not ‘in the know’, held out a sliver of hope that maybe Bret had a little magic left, but he didn’t. Bummer. I think Scott made a point about this one. They delivered a super heated segment, despite them not actually feuding and there being zero chance of them wrestling. It could have been a *great* match, and I bet Foley could have done some innovative ‘PG’ safe things, but as it stands all I remember is the awesome segment. I can’t even remember the PPV they were going for.

If you want to submit an idea for a QOTD or something you’d like to see
discussed but don’t have a ‘question’ per se, you can hit me up at
[email protected], follow me on twitter @MeekinOnMovies, or find me
on Facebook – Facebook.com/pmeekin
——————————————————

Paul Meekin
is a writer, producer, video editor, reviewer, and long winded, and in
the past has been referred to as “The American Harvey Pekar”. He’s
written extensively for, Hollywood Chicago, TouchArcade, Starpulse, and Scott’s Blog of Doom – and hopes to make a career of it someday.

His
writing is viewed by thousands of folks monthly – and most of them
enjoy it. He’ll happily write or ghost write for you, for free stuff,
$25 dollars PayPal, or real money online poker chips.