If the stars aligned to have Joe headlining a Wrestlemania I can’t see Punk saying no to one more match. I bet you they would like to play fight in the main event of the "Grandaddy of Them All".

​I feel like I’m being trolled here. But CM Punk does tend to equal pageviews, so…​

Dear Scott,
Just wanted to ask an excruciatingly long, painful and pedantic question with ten parts to it followed with a juggling demonstration on your head (ha!):
Does the WWE need to put the title on Ambrose to get the fan bases's trust back?
Nico
P.S. I am surprised no one has done that joke yet actually, or maybe they did and I missed it?
I think you're the first.
Anyway, as Dean, I think he'll be fine if he loses.  He can always do something wacky on Monday and get his heat back, given that no one is really expecting him to walk out as the champion anyway.

I was trading e-mails with someone I’m a big fan of on a radio show who thinks Shawn Michaels is… well, let’s just say heavily overrated. That’s another story in it’s entirety, however, one part of his opinion seemed insane to me… he claimed Shawn, unlike Flair, Bret, Bryan, etc., never carried a bad worker to a great match. Obviously this is insane, but I was wondering if you could please give me some of the best examples you could think of off the top of your head? Not asking for any deep contemplation or anything, of course.

I imagine this may seem unbelievably silly – and it probably is – but any help would be appreciated!

Thank you for phrasing it in a way where I can continue to bash Hogan and Reigns.
Shawn carried Hogan's (literally) broken down ass in 2005, lock stock and barrel. As an alternative you could look at Tatanka at WM9.  Or Ken Shamrock in 97.  Or the best example, Kevin Nash at WM11.  During his prime you could basically throw him in there with ANYONE and Shawn would get himself over.   Doesn't mean it was effective for the other guy, but Shawn sure as shit made some terrible workers have great matches.
And of course Daniel Bryan did the same for Roman Reigns this past week. 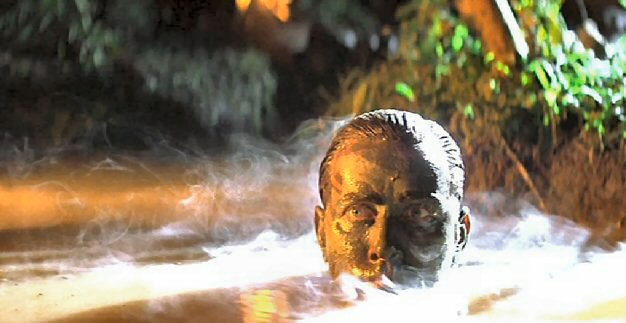 So I saw Apocolypse Now for the first time…ever last night and I’m at a loss for words. No one in their right mind can say that movie was ‘enjoyable’, but it was certainly enthralling and insane and poignant and brilliant and mind-blowing.  After finishing it I was so blown away I just kinda sat dumbfounded for quite a long time and had no idea what to do next. What was the point, ya know?

Have you ever listened to a song, watched a movie, or witnessed an event that gave you pause to the point of being literally dumbfounded? Has a piece of art ever moved you emotionally to the point of shock?

Scott,
Hi!
Over at Paste Magazine is a list of the ten things you should watch first on the WWE Network, written by myself and Robert Newsome, the editor of the Atomic Elbow wrestling fanzine. It'd be awesome if you could post a link at the Blog of Doom.
http://www.pastemagazine.com/blogs/lists/2014/02/10-things-you-need-to-watch-on-the-wwe-network.html
Sure, and I've love to check out the Network if their billing page would ever stop crashing this morning…

In the midst of recapping the PPV on the show this morning, Dave offhandedly described a certain cartoon going around the WWE offices, in typical cryptic Dave Meltzerese. The gist seems to be a spoof of AJ as a teenager crying because she wants to be "just like Lita". And then they leave it at that because I'm sure we can all fill in the blanks.

So yeah, if someone could get a copy of that for posterity…

Nope.  Or to be more eloquent, no, and they don't give a fuck.  They're serving two masters right now, with the PPV buys driving the traditional wrestling way of doing business, and the TV ratings driving their new rights-driven way of doing business, and as a result one often clashes with the other.  It's a totally crazy way of doing things, but that's what the business in 2012 has become for them.  Just wait and see what happens if their network ever launches.

Considering he isn't really a wrestler anymore, why are you so sure HHH will politic his way into a victory on SS? I always assumed, back when he was an active wrestler, that HHH kept himself dominant because of the whole "can't lose my spot thing". But at this point, if anyone has a secure spot it's him. Why does he care whether he wins or loses?

Exactly.  Why DOES he care whether he wins or loses?  The answer is "Fuck if I know," but clearly he does because he made sure to put himself over CM Punk last year.  He could be out there doing jobs every night if he wanted to and making guys into stars, but he chooses not to, and it's kind of baffling.  Well, not really, but baffling based on regular person logic.  Considering the bromance he has with Sheamus, you'd think at the very LEAST he'd go out and lay down for the brogue kick if he wants to be a part-timer, but no, he won that one too.
I dunno, people would defend him saying "Well, he loses at Wrestlemania a lot" and yada yada, but really, the dude is going to be the OWNER OF THE COMPANY in a few years, so he SHOULD be losing!  The important thing should be making money for "THIS BUSINESS" which he loves so much, so why worry about jobbing the tag titles when he was with DX or losing to Sheamus at Wrestlemania or whatever?