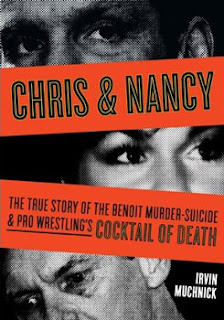 Well, my last book review had someone allege that I had fallen off the wagon and was back on drugs. So WHY NOT this book?

No wrestling fan will ever forget where they were on Monday, June 25, 2007. It was a day that evoked some pretty tangible memories. I have stated my own as such in reviewing two of the books authored on the wrestler once known as Chris Benoit. I say once known, because WWE canon has all but erased the man, ex-sponged him from history.  The unfortunate thing is that many of us who were fans of the man cannot simply do that. The horrible reality still stares us in the face, strikes us in the heart like a flaming dagger. Here was a man celebrated for being an in-ring maestro, an absolute artist who took the medium of pro wrestling to its rarest of heights, a man who was never truly appreciated by whatever American organization was pushing or de-pushing him, a man not necessarily understood by the so-called “unwashed masses” of wrestling fans, who ascended to the top of the organization’s mountain, and provided a orgasmic release from many longtime fans, real fans, inside fans who truly understood, or thought they understood, what pro wrestling was all about. Here was a wrestler’s wrestler, the heir apparent to the thrones of both Dynamite Kid and Bret Hart, a man who personified the in ring craft as the truest form of art, who gave his all for the fans, who paid his dues. Chris Benoit was every wrestler’s favorite wrestler. That is a statement many have made. I was one of those die hard fans who enjoyed everything Benoit had to offer, left on the table, sacrificed for. And now…as far as my friends go, I look like the biggest moron in the world. All because of one horrific weekend in 2007.

That is a paragraph that, more or less, not necessarily word for word, that I have had to write when discussing the relative merits of my favorite wrestler for six years now. The events of that weekend not only shook WWE to its core, but all of wrestling and its many fans, and all of America, and I dare say Canada and Japan. The Benoit double murder suicide was catastrophic in a sense that it destroyed the psyches of so many people in so many places, from so many walks of life. It was an unthinkable act perpetuated from the most unlikely source. So we thought. And to this day we still grieve.

Now, I have reviewed both “Ring of Hell” and “Benoit”, and both are recommended reads. I have steered clear of reviewing the nameskae of this website’s book for a while now, but, trust me, it will be forthcoming. What I want to address, what needs to be reviewed, is Irv Muchnick’s “Chris and Nancy.”

It is, by and large, the most salacious book published in this post 6/27 world. While many who read my reviews probably know of my distaste for Irv Muchnick, this is one book where I can lay most of my bias aside and acknowledge the facts. Irv has written a hell of a book here. It is detailed and fairly accurate. Yet, there are aspects of the book that I still find distasteful and loaded with anti-wrestling hubris.

This book is not so much a life history of Benoit, or even a history of Nancy Toffoloni.  It isn’t even necessarily a character study. The basic gist of this book barely has anything to do at all with Chris, Nancy, or Daniel Benoit, really, God rest two of the three souls. No, this book is more about the investigation of Fayette County Georgia police officials, the ineptitude of DA Scott Ballard, and WWE’s reaction to the whole sordid mess.

The book features two quick and dirty chapters on the life’s of Chris Benoit and Nancy Toffoloni. Like 50 pages worth. Not much, and other books have done their lives justice better, like “Ring of Hell”, “Benoit”, and, yes, “Dungeon of Death.” All do a better job of describing the humanity of the individuals who perished better than this book. Even if none directly deal with the most tragic figure of the tragedy, Daniel. What Muchnick does is expose the holes in the whole shitty investigation by the Fayette County Sheriff’s department. It depicts a police force not equipped for the crime that happened, and a complete ineptitude from the office of the District Attorney Scott Ballard. Muchnick actually does an amazing job of laying out the issues that any sane person, wrestling fan, non wrestling fan, would allay in terms of the evidence provided. For that, it is just an outstanding read, and one I recommend whole-heartedly.

Another aspect of the book, as Muchnick strays from the actual history of the Benoit family, is the link between Benoit and Dr. Astin, which, do not get me wrong, is significant. But if you are to write a proper story on this whole sordid mess, you NEED that backstory. Muchnick merely plows ahead, ignoring the humanity of what happened and delves straight into the why, what and how instead of the more significant WHO and WHY. Now, Astin was no angel, a complete asswipe drug dealer with no conscience or fear of repercussion, which may be the one positive that came out of this whole nasty mess. A corrupt Doctor off the streets means less drugs funneled to dependent addicts without a script. For that, I applaud Law Enforcement.

The largest portion of this book, like most else, is devoted to the Media Circus surrounding the whole affair. It was a joke. But whereas other books deal with the Press following the crisis, this one details Congress’ handling of the shit. And, much like the hearings of Major League Baseball? It is absolutely laughable. I will not get into details, because no detail is needed. All that needs to be asked is these: Has Pro Wrestling been charged? Has MLB been charged? NO. I sit here on a night where a lifetime ban of Alex Rodriguez (justified) is being bandied about. What wrestler has truly been called out? NONE. And it will sadly remain that way.

Irv Muchnick’s “Chris and Nancy” is a fine book, but far from the truth, the whole truth, and nothing but the truth. But it IS must read. The only thing that pisses me off about it is the fact that he constantly, CONSTANTLY, in footnotes throughout the book, makes reference to the materials he came across in studying the case. And they are available for $25 from Irv AFTER the fact.

A true journalist, that Muchnick.

Here's a pretty insightful interview about the Benoit murders straight from Nancy Benoit's sister. This quote especially stood out to me

"The medical examiner told us after the autopsy that Chris was on his way to death within 10 months. His heart was huge, about 3 times normal size, and it was ready to blow up at any moment."
That's just frigthening. Here's the full interview below.
http://the2count.com/?p=765
Yeah, the "roid rage" angle always gets overplayed with the Benoit deal.  He had drug problems WAY worse than steroids.  Plus a neck that was falling apart and a brain that was turning to mush.  Much like Eddie Guerrero, even if he hadn't died on that particular occasion, the clock was pretty much at midnight for him.
This is a really great interview, by the way.  She's very well-spoken and actually comes across as knowing about the wrestling business.