If you haven’t noticed, I’ve been sort of MIA for….I’d have to check. It feels like awhile. Anyway, I’ve gotten a second full time job doing events writing and promotion for Boston Events Insider, which is a gig that’s paying me to write, do research, and attend all kinds of crazy stuff. It’s like the gig I had for Roger Ebert on crack.


Thus: What are your favorite finales?

So, with a…somewhat heavy heart I must take my leave of the QOTD duties, hell, I haven’t even had the time to check this blog in a few weeks. I guess we’re back to Orton / Cena, wrestling wise? I think? Who knows.

Anyway, I wanted to say thanks to everyone who responded to the QOTDs, praised it, hated it, whatever. It was the first time I ever had a real audience of people who would respond to whatever I would write. We all learned so much about each other over these past months, and I like to think we’ve grown as a community. We’re not just wrestling fans, we’re…I don’t want to say the word friends because we’re on the internet, but fuck it, I’ll say it, we’re friends. Hell, Caliber and I talk on Facebook every few days, so yeah. Friends.

I’ve mentioned it before, but being able to do this QOTD daily (mostly daily) has given me the ability to write every.single.day, which is fantastic. Now I’m writing every single day professionally, and I don’t think I’d have it in me if it wasn’t for you kind folks. Posing questions I have, having my opinions validated or invalidated, has been the kind of experience that is invaluable.


So, Thank You, Blog Otters.

I’m sure I’ll pop in occasionally, with a review, quip, or even the occasional, way-too-long-form question if I find the time. Hopefully someone takes up the challenge of doing a daily one of these, because I think they give people a chance to talk and converse and discuss their lives in a way they really can’t anywhere else.

That said, now it’s time to give shit away. If you live in New England, I have more tickets to give away than I can count – well I can count, but it’s more fun if I say it that way. Find me on facebook – facebook.com/pmeekin, twitter (@meekinonmovies), or just e-mail the [email protected] e-mail directly, and check out bostoneventsinsider.com to see the kind of ish we’re doling out. The coolest giveaway is currently for something called ‘The Slutcracker’ which is probably exactly what you think it is.

Even if you don’t live in New England, find me on facebook. I’m friendly!

Now what you’re really here for: 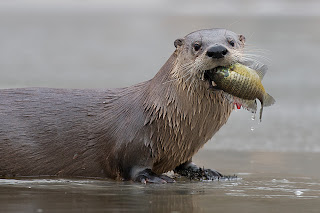 Bye! See you around!