THE CRUSH GALS vs. THE JUMPING BOMB ANGELS:
* Here’s a collection of three matches featuring the Crush Gals going up against the Jumping Bomb Angels, all uploaded by our very own Evito-X Puro! The first one happily keeps some commercials, but ’80s ones are less wild than the ’90s stuff.

These matches are fascinating because the JB Angels are of course memorable to WWF fans of the ’80s for throwing out the most innovative offense on Earth at the time, in Japan it was the Crush Gals who were more popular and successful, being full-bore teen idols with a fan movement that was a pure phenomenon.

A Refresher:
Chigusa Nagayo: The most wildly popular Joshi probably ever, with legions of teenybopper fans despite honestly coming off like a bully when she’s not fighting the Atrocious Alliance. REALLY good at selling. Plays Ricky Morton. Wears red.
Lioness Asuka: Better worker than Chigusa but only 80% as popular. Comes in to mop up. Wears blue.
Noriyo Tateno: Long hair and the thiccer of the two Angels. Was the bigger star.
Itsuki Yamazaki: Slender and extremely quick- inspired Manami Toyota big-time. 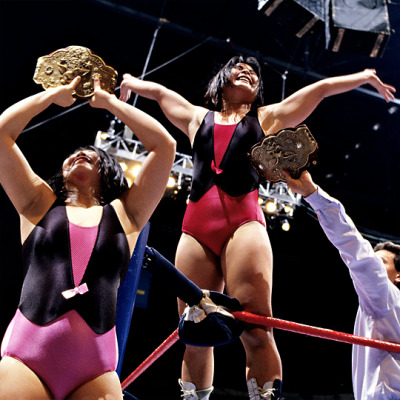