So, I was piddling through my Youtube Channel yesterday, and noticed that my most popular video (in terms of discussion, not views) is one where I rail against the CGI-ification of the classic kids show “Shining Time Station”.

I…intended this as a joke. A qausi-serious diatribe on how things change, we hate them, and we become just like our parents. It…did not turn out that way. Through 43 comments on the video I found, well, people really f------ care about that show, and really f------ hate the people that took it over. But the comment I came across yesterday, sparked my interest.

A user named “TrainNation” said the following: “i just told off that little prick that did a commentary on this video.
you are completely right, CGI Thomas the tank engine has been ruined by
CGI. iv’e written multiple letters﻿ to HIT entertainment (A.K.A the root
of all evil.) you are my idol. Thank you man.”

The unsurprising fact that I am officially someone’s Idol not withstanding, I found this video by someone who may or may not be a baby Sheamus:

So, Blog Otters, Who hates you? And why?


Regarding the video directed toward my ‘commentary’ on Thomas The Tank Engine, well, I thought it was hilarious. I crave attention like the rest of you seem to crave sports betting, drugs, and alcohol, so in all honesty I thought it was kind of neat in a ‘hey, I affected someone enough to make them respond back in video’ sort of way.

The other ‘haters’ we seem to all have in common are the folks over at the NPP forums, who I actually get a kick out of. If they get their jollies commenting on folks, who comment on other people’s opinions of wrestling, have at it, I say. And in fact I have made the choice to keep calling you kind folks Blog Otters in honor of unity.

It seems both you, and the NPP folks, really do hate Blog Otters. And call me crazy, call me optimistic, call me a modern day Gandhi, Martin Luther King, and Jesus rolled into one well-hung package, but I take pride in knowing my brilliant name for a wrestling community has fostered a solidarity that was not there before. I am a God among men.

Blog Otter Award: No One! Not a single one of you picked up my reference to the cult-classic “Starship Troopers” in yesterday’s QOTD title. I thought you guys were cool. Well as cool as a bunch of wrestling fans who let me prattle on about whatever I want on a daily basis, could be. <3 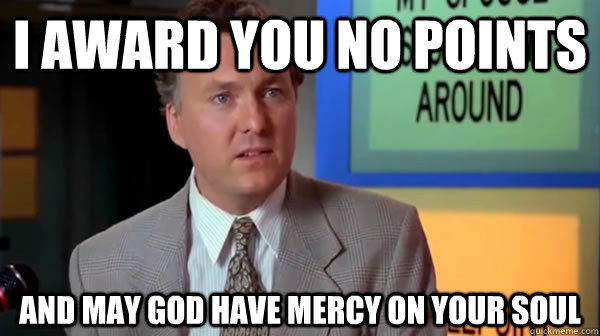 1. Serious question: Can you folks tell I’m being half-serious in my above video? I’ve had a long running quandary in my life where I think my sarcasm is so dry it comes off sincere.If this quandary turns out to be true, my whole life, up till this point, is a sham.

2. One thing you may not notice in that video, that I intended, and your ‘sub-conscious’ probably picked up on is the blue-gray color scheme. The poster in the background is blue, so I wore a blue collar. Anytime you video something, try to have one or two colors pop up more than once. It’s really the difference between something looking shitty amateur, and some-what shitty amateur.

3. I think it’s especially wild that I made my video in one take and talked off the top of my head, and that guy went back and meticulously responded to my points.

4. One more highlight from the ‘Thomas The Tank Wars’


‘YOU PRICK. Thomas the tank engine has been something iv’e loved since i
was born. and when something as lovable as Thomas gets tuned, more
people than you think will get pissed off. i admit, i had my doubts
about Thomas as i got older, but my love for him all my life has kept me
from leaving my childhood. Do you have any idea how many people that
were actually mortified at the CGI change. and by the way. who the hell
are you to make this video, GET A DAMN﻿ LIFE!!! you think Grown men
watching’  Thomas is sad!?! your like a five year old boy who has nothing better to
do but sit on the computer and rant about peoples personal opinions.
heres an idea, keep yours to yourself because guess what!?! NOBODY GIVE
A﻿ FLYING F---!! you are the saddest little troll iv’e ever seen in my
life. damn, your just like the new CGI in Thomas YOU MAKE ME F------
SICK!!’

Are there any current wrestlers who are at this moment in time over/doing exceptionally well in their careers who for some reason or other you just cannot get behind? I have very recently based on recommendations from this blog begun watching TNA, and I just can't stand James Storm. From the ridiculous backstory vignettes where he's on a farm feeding his horses, to his long flowing hair which seems way too straight and conditioned for someone who is meant to be this big badass, to his lame 'cowboy wrestler' gimmick complete with stupid hat, I just don't want to see this guy anywhere near a main event. Maybe he'd work better for me as a heel. Anyway, do you have any similar dislike for any wrestlers, TNA or WWE? Cheers

I quite like James Storm and always have, actually.  For me personally, I really don't like Wade Barrett, although he has good matches and a good look.  I just get an annoyed vibe when he comes out for some reason, and I don't even know why.  For TNA, without a doubt it's Mr. Anderson.  Doesn't matter if he has good or bad matches or if he's heel or face, he's like nails on a chalkboard for me.  From his overdone "assholes" thing to his "Guy that no longer gives a s--- about maintaining himself as a top star" vibe to his copied 90s moveset, he's just awful.

Oh yeah, wanted to forward this to you:
http://www.youtube.com/watch?v=A8sO_N5kIJw
Yeah, we just had Wrestlemania and we've talked about this topic ad nauseum; however, JR hits the nail on the head w/ this and some people in the IWC are gonna disagree. BUT, JR is an overwhelming voice of reason. Its still true, Haters gon' hate…
And then there's this – http://www.youtube.com/watch?v=93kOL6nUxLI

See, JR wins the internet.  Roddy Piper also makes an awesome point, that people should be PROUD that WWE produced a homegrown star internally and then can bring him back instead of another Jersey Shore jerkoff or a f------ Kardashian or someone else who would be legitimately bumping a wrestler off the show.