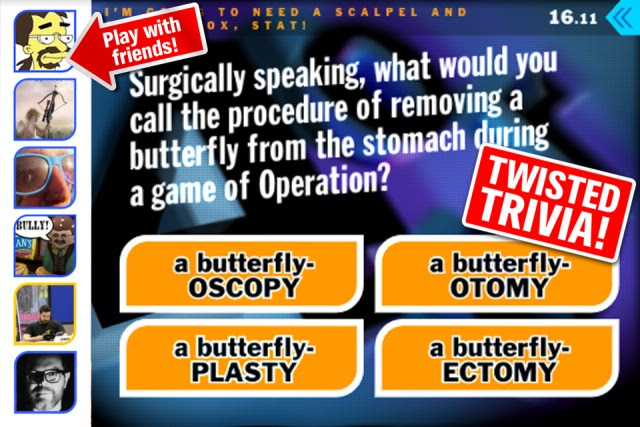 In this world, there are few places for B-type personalities to massage their egos. You can write a
13,000 word diatribe defending the “Star Wars” Prequels,get a writing gig, kick-start that graphic novel. but the ability to have an honest-to-goodness pissing
contest is the privilege of the macho. So they play
trivia.

But once people know you’re good at trivia, they don’t want to play with you any more – especially if you celebrate correct answers like Superbowl touchdowns.

Until…you meet a pretty girl. I wooed her with a trip to the giant
Dave & Buster’s trivia machine, the sly
maneuver of giving my prize tickets away to a kid, and not much else. Trivia came up again, and I mentioned
owning “You Don’t Know Jack”.

Her eyes lit up, and I was suddenly
inviting a girl back to my place to play video games. This is why I fondly refer to the ‘old’ You Don’t Know Jack as the game that got me laid….

So years later when I saw that same girl’s Facebook page
light up with stats and updates about her “You Don’t Know Jack” scores,
I was instantly curious. Little did I know a mini phenomenon had swept
the nation. You Don’t Know Jack was mobile! There were
people, all across the country, playing this game? And they wanted to
win? And they liked the jokes? And I can play DIRECTLY against people on FB
whom I base my entire life worth upon my sense of superiority over?

At this rate, You Don’t Know Jack is going to be the
best man at my wedding.

So I downloaded the game and immediately had trouble doing much of anything because the game
doesn’t play nice with 3G connections. After getting myself a more
stable connection, I found myself enthralled. “You Don’t Know Jack”
gives you an asynchronous gaming experience that actually manages to
feel simultaneous thanks to some ingenious voodoo.

It works like this: You Don’t Know Jack is broken down into a series of episodes. Your Facebook friends play the game, and their score for each question is calculated,
and pushed to your phone or iPad while you play that episode on your
own time – so it looks like you’re playing against four other friends.
So while your buddy Joe may have played his episode against completely
different people, for your experience, it’s as if you’re playing Joe in
real time. It works splendidly. Many a delight comes from watching a
friend you know get a particularly easy question wrong, or shooting your
way to the top of the standings after answering a hard question the
fastest. This is totally addicting stuff.

You Don’t Know Jack presents itself as a ribald, irreverent trivia
show. There are fake sponsors like “The Warehouse Supply Warehouse”
(with all your warehouse supply, supply needs), and Nacho-pedic Beds
(and pillows). The writing of the questions and associated jokes is
fairly strong, and while there are a few groaners, the quality of
writing is incredibly strong considering the bone crushing amount of
content Jellyvision has pumped out in such a short time. Annddd if you want to play a lot of that content, you’re going to
have to pony up some dough. While the app is free, and you get one
‘free’ episode per day, if you’re anything like me, you’ll want to play
more than one a day, heck, you may want to play five, or six, or seven
games in a day. Which is cool. “You Don’t Know Jack” has successfully
brought the arcade to the iPhone, asking you to pony up about 2 bucks
for a thousand coins, which equates to five or six additional episodes
or so (depending on how many coins you’ve previously won, earned
bonuses, etc). I’m a big fan of this sort of structure in my mobile
games. If I want to play more, or feel like I should support the
developer, I can drop a buck or two and feel like I’ve done my good deed
for the day. Similarly, it’s also entirely possible to never pay a dime
for “You Don’t Know Jack” and have a daily dose of irreverent trivia.

The trivia itself is mostly a mixed bag depending on your tastes.
Hosted by the tastily named Cookie Masterson, each game is broken down
into 5 questions (and five associated wisecracks by Cookie). The topics
range in variety from pop culture to movies, to sports, to science, to English and grammar, and a variety of others. The faster you answer the
question, the more money you earn, and you lose more money for a wrong
answer if you buzz in quickly, too.

The final round consists of a “Jack
Attack” which has you doing some quick-fire word-association, and there
are a few other trivia formats that occur occasionally through a game,
as well, such as a “Dis or Dat” which has you associating a phrase with
one thing or another, and the accurately titled “put the choices into
order and buzz in and see if you are right….Question”. The person with
the most money at the end of the game wins coins (used for purchasing
more “episodes”) and bragging rights. Yes, you can *actually* brag on
your friends Facebook walls if you enjoy the taste of victory with a
side of petulance.

On the subject of petulance, it’s entirely possible you’ll hate this
game for the reasons I like it. The so-bad-they’re-good jokes tickle my
fancy, while it may grind yours like sandpaper. The graphic heavy A/V
presentation could tax older devices and lead to lower scores, and it’s
entirely possible for folks to buy ‘Point Boosters’ for a round that
allow them to get 3x, 5x, or 10x the points for a correct answer.

Look, if have ever fancied yourself a trivia hound, you owe it to
yourself to at least give “You Don’t Know Jack” a try. It’s completely
free and playing your first few games will cost you absolutely zero
dollars, and barely 10 minutes of your time. It’s engaging, it’s funny
(to me), and hell, you may even get laid (or learn something!).

There’s also a healthy dose of Celebrity episodes, and the game is constantly updated with new jokes and questions. If you like trivia with a side of crazy – give it a shot. It’s free!

10 Video Games Ruined By The Hype. Clicking this link literally feeds my family.