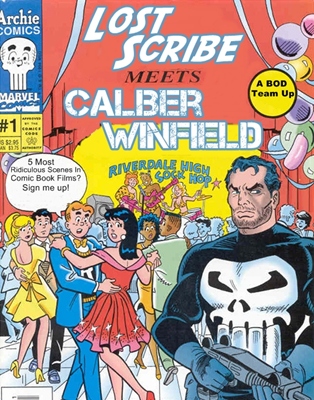 It’s I Have Issues meets The Only Reviews You’ll Ever Need in the latest BoD Team-Up adventure!


When we first started this article we
were going to call it “Horrible moments that make you ashamed to
like comics and forces you to take shit from your friends who you
assured were going to see an awesome movie list!” In the end that
title was decided to be too long.
Disclaimer: After being burned by comic
movies such as the ones below I have come to be very suspicious of
them, so I don’t watch many of them anymore unless I like the
creators on them. So for instance I have never seen a Ghost Rider
movie. So most of my choices are older ones and I am sure that I
missed other more ridiculous moments. Still you can’t deny, that my
choices suck.
5. Ang Lee’s “Hulk”
Any scene using comic panels.
This movie is a snoozer and for a movie
about a man-monster that destroys shit and gets into fights over the
littlest thing that is unforgivable. I still really enjoy the Hulk
versus that tanks and choppers at the end but that is pretty much the
only thing good in the entire film. The worst part is by far when the
movie transitions using comic panels. It’s a head scratcher for sure.
It’s as if the creators said, “you know comic readers love those
white borders that hold the drawings in, why has no one else thought
to incorporate that in a comic movie! We will be the toast of the
town and carried around comic con on those pillow thrones as we get
our pick of any hot cosplay model we want!” Why don’t they use that
same logic when they adapt novels to the big screen? Maybe they could
put page numbers on every scene or show a hand flipping pages for a
transition shot? No I got it, when they adapt a video game they
could put a life bar above the characters, or have flashing Enter
Player 2 at the top of the screen! See how much fun it is when you
start to make stupid shit up!
4. Superman 2
Cellophane shield
It’s almost more painful when a movie
gets so much right and then fucks it up with a few bad scenes.
Superman has a laundry list of superpowers so why they had to add a
few more to his arsenal I have no idea. None of these is more
ridiculous than the cellophane shield and no matter how much you try
to rationalize the other powers (superkiss yeah I could buy that!)
the cellophane is just too stupid.
http://www.youtube.com/watch?v=uS9GJNETHsw
3. Daredevil
Playground fight!
This scene is stupid but it really is
more of a personal choice. So my family knows nothing about comics
and I am telling them how hardcore awesome Daredevil is. Sure Ben
Affleck (at the time) wasn’t the best actor and okay Bullseye doesn’t
have his costume and now Kingpin is black, it’s all fine because
Daredevil is cool and his coolness will transcend these minor
quibbles. Then this shit happened and I lost all credibility as a
full proof source for movie recommendations. This was the point in
the movie where I could no longer make excuses, much like sex with a
smelly chick or a bad expensive dinner, I was just gonna have to
power through.
http://www.youtube.com/watch?v=84bDpTiNtuI
2. Spiderman 3
Bad Peter.
How could all the original actors and
the original creators fuck up a third movie after two good ones and
featuring arguably the best Spider-Man villain? The answer
http://www.youtube.com/watch?v=1yy62Vds8-4
1. Batman & Robin
The whole fucking movie!
“This move is awesome!” -said by no
one ever.
To pick out one scene is an exercise in
futility. Even more amazing is the cast in this travesty! George
Clooney, Uma Thurman, Arnold Schwarzenegger, and Alicia Silverstone
(at the time) that is some star power right there! Joel Shumaker gets
all the blame but no one man could create this masterpiece in bad
filmmaking by their lonesome so listed below are others responsible.
Akiva Goldsman
Mitchell E. Dauterive
William M. Elvin
Peter Macgregor-Scott
Benjamin Melniker
Macheal E. Uslan
Full list of those responsible
http://www.imdb.com/title/tt0118688/fullcredits#cast
You all know what you did now go sit in
a corner.
http://www.youtube.com/watch?v=Jj2KcFj1jbE
J. Ryan Buck ([email protected])