* This is yet another big Joshi show; actually the third last really big one of the year- only Wrestlemarinepiad ’93 and St. Battle Final come later. This is a sequel of sorts to the first TQB from the Summer, which had the famous “Multi-Person Iron Man Match” that saw JWP pull out a last-minute victory against AJW. Here, we feature a ton more Dream Matches, with more focus placed on singles contests between people who haven’t fought before.

“TL;DR- Why Should I Care?”: Hokuto’s ridiculous run in 1993 continues with a match against Mayumi Ozaki, we get Manami Toyota versus her Non-Union JWP Equivalent in a match over ****, and one of the best tag performances you’re gonna see, courtesy of Devil Masami against old rival Chigusa Nagayo’s team. This show kicks some serious ass.

Something a little different today, as I could only find one Tag League match from a particular show, but also found an episode of Champ Forum TV featuring JWP matches from 1993 as well! So it’s a double-whammy today!

“TL;DR: What’s the Big Deal?”: The three best wrestlers in AJW in one tag match, with the other one being a rookie phenom who can hold her own. Plus an interesting look at JWP in “normal people” interviews and that ***** Bull Nakano/Devil Masami match I’ve reviewed before!

Shit like this is why Hokuto is an all-time legend.

JOSHI SPOTLIGHT- DEVIL MASAMI vs. DUMP MATSUMOTO:
* Okay, so with this week’s Spotlight being a tad short (a single match plus a recap of two old reviews), I figured I’d find some ’80s stuff, including a Devil/Dump match I was linked to weeks ago. And also, someone uploaded the Hokuto/Numacchi match from Super Whirlwind so I can review that arduous epic here!

So read on and see some of that wild 1980s Atrocious Alliance clusterfuck goodness! And an ultra-rare WWWA Title decision!

JWP THUNDER QUEEN BATTLE:
(31.07.1993)
* And now we come to what is possibly JWP’s biggest show ever- the Thunder Queen Battle! I actually reviewed the Main Event early last year, as it’s one of the most famous bouts in Joshi history- an 8-Person Tag Team Iron Woman Match! It’s one of those things that’s just ***** or you’re wrong and that’s that- it’s that good. But hey! There’s OTHER matches on the card, too! Every match on here features JWP’s stars in a “home field advantage” show against AJW stars- still big business as this was a brand-new thing. Everything on here is a never-before-seen spectacle as a result, drawing a lot of attention.

Everyone comes out for the match announcements to start the show, mixing up business casual (Ito, Minami), “Fashionable Teenager” (Sakie), ’90s skateboarder (Hotta), “Peter Griffin” (Aja), or just “company t-shirt and shorts” (most JWP wrestlers). Whatever Ito says cracks up everybody, while Minami positively TOWERS over people in the most 1980s suit ever- a red business top with huge shoulder pads and stark-white pants. JWP’s rookies (Candy & Sumio) look positively terrified to be doing promos in front of a live crowd- their eyes are wide as dinner plates. Aja & Kansai get the biggest reactions- it’s weird to see Kansai kind of smiling and snarking given how serious she normally is.

“TL;DR- Why Should I Care?”: Pretty much every Joshi fan automatically gives the main event *****, and it’s the most unique, once-only match stipulation I’ve ever seen. And there’s another **** match in the middle! Otherwise, it’s good old-fashioned interpromotional mayhem, with a lot of one-time-only matches. 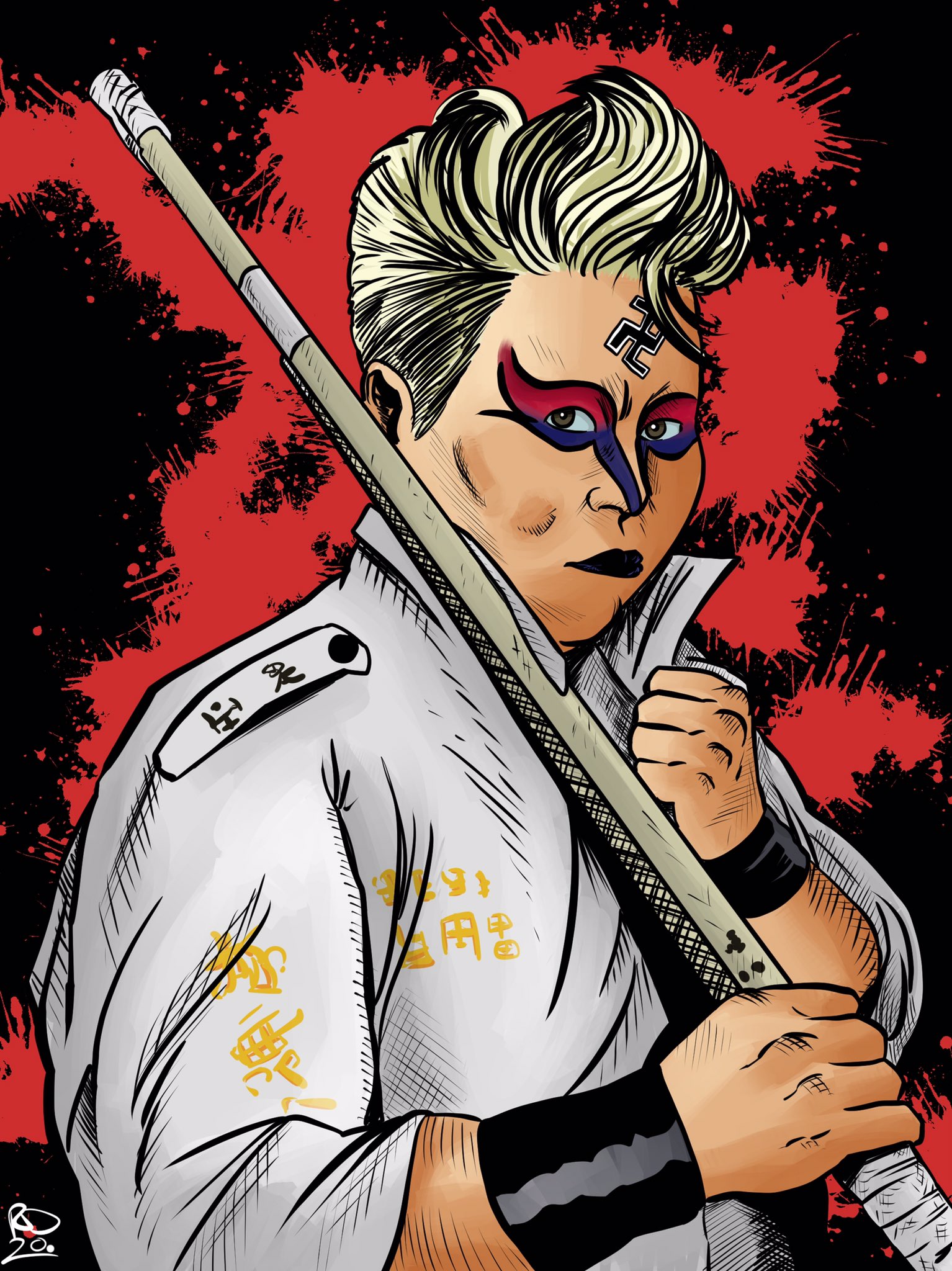 Pic by our very own Bob Dahlstrom!

“Matsumoto actually pioneered the gimmick that the Road Warriors would later use to great fame in the United States, of being face-painted bikers with bizarre haircuts and monster heels who sold very little, if at all, for the smaller, under matched babyfaces. […] Matsumoto’s impact was so great that she often brought crowds literally to tears with her villainous tactics, and when she would merely walk down the street in any major city, people would scatter in fear”
-Dave Meltzer

JOSHI SPOTLIGHT- JWP (vs) AJW- “I Know You”:
01.12.1992, Tokyo Ota-ku Taiikukan
– This YouTube video is taken from a JWP video with mostly clipped matches, two huge bouts, and some surrounding nonsense afterwards. This actually matches Dream Rush from a week ago slightly, in that it’s got the triumphant coronation of an Ace champion… but is the sub-main event to an interpromotional tag match. These interpromotional matches are SO BIG that they completely subvert the notion that the World Title matches go on last, and that’s reflected in the heat these bouts get.

Dream Rush itself was a really great card, featuring the retirement of Bison Kimura, Aja Kong finally becoming Ace of AJW by defeating Bull Nakano to end their years-long rivalry, and Manami Toyota & Toshiyo Yamada being triumphant over JWP’s Dynamite Kansai & Mayumi Ozaki in the first of their ***** trio of matches. My review here: https://blogofdoom.com/index.php/2019/09/23/joshi-spotlight-dream-rush/

Since a lot of this is clipped, I threw on a couple of long JWP tag bouts I found as well.

“TL;DR: Why Should I Care?”: The two main matches are actually really fantastic bouts, with great heat. One of the tags at the end is really good, too! And anything where JWP & AJW wrestlers fight each other always draws a tremendous reaction.

JOSHI SPOTLIGHT: JWP MIDNIGHT SPECIAL:
(17.08.1992)
* So I have no idea what the backstory is for this show, but this is one of the only extended shows I can find for AJW’s rival promotion, Joshi Women’s Pro-Wrestling Project, in 1992, so I figured I’d show what they were up to around this time. I believe the company has only recently split up at this point, continuing on after many women quit to form LLPW (including Shinobu Kandori, Harley Saito and others), so it’s a big show for a company that has to be a bit endangered at this point. And MAN is the setting weird- it’s like a High School gymnasium, with only four rows in the bleachers on the hard camera, and two rows on the floor on another side! Yeah, only two sides of the ring have an audience! I could literally count the paid attendance here- I’ve seen Nickelodeon Game Shows in front of more people.

This show appears nowhere on CageMatch, nor WrestlingData, so I couldn’t tell you anything else about it. Like why the YouTube video is a 2-hour show with an hour of dead air after it. Quebrada calls it “JWP Pre-Stage Studio Match” and mentions the setting as TV Asahi Studios.

“TL;DR- Why Should I Watch This?”: You get to see a whole ton of people work an ungodly amount of time in a single night- a truly remarkable case of stamina from all involved. And nearly every match is around ****.

-Right in the midst of the Interpromotional Era comes this show- a JWP event with almost every match featuring an AJW invader, capped off by an Ace (vs) Ace bout- Dynamite Kansasi fighting the WWWA Champion, Aja Kong! Also wrestling is Kyoko Inoue against an up & comer, the legendary Chigusa Nagayo (on her JWP run to regather her strength) against Mayumi Ozaki, and an Idol (vs) Idol match- Takako Inoue & Cutie Suzuki! This is thus JWP’s biggest show ever up until this point, with major stars all over the place and a great Main Event. Weirdly, there’s no commentary at all for this show, giving it an odd feel… provided you notice it (I was 3/4 the way through Takako/Cutie before I realized “Hey, nobody’s talking here”).

“TL;DR- Why Should I Watch This?”: Standard-issue Joshi excellence, in that four matches hit around ****, and some rare “Dream Matches” you’ll literally never see again. The stars of  yesterday versus the stars of tomorrow is particularly excellent.

“She’s [Chigusa] the single most popular and arguably the most historically important female wrestler who ever lived. To this day, in pro wrestling or MMA, not Hulk Hogan, Steve Austin, Kerry Von Erich, Dusty Rhodes, or Chuck Liddell could match the reaction I saw that woman receive live in her heyday.”- Dave Meltzer, who LOVED to point out how big the reactions the Crush Gals got compared to Hulk Hogan. If you write a Gals article, you have to mention them equaling Hogan in popularity. I think it’s a rule.

It’s the fifth Wrestlemarinepiad! With the Dream Slam having happened earlier in the year, “Interpromotional Matches” are the new norm! This led to a series of increasing houses for the various joshi companies in a new age, though of course this had that issue you always run into- once you escalate things to that point, what are you going to do once the fans get bored… or worse, if you eventually stop co-promoting stuff and have to go back to regular shows? But tonight, we have a ton of Main Event-quality matches that are also Dream Matches in many regards!

ALL STAR DREAM SLAM I (April 3, 1993):
The two Dream Slams are events that took place about a week apart, meant to be interpromotional shows between the top Joshi (women’s wrestling in Japan) companies around. All Japan Women’s Pro Wrestling, or AJW, had been the top company for years, but several upstarts had gained a lot of traction (often using former AJW talent), and the rivalries brought on a surprising amount of working together- in this case, the sheer amount of money to be made from interpromotional “Dream Matches” was too good to turn down. So at the peak of the business, all the companies got together and put on a few Supercards, creating a new status quo that lasted a few years- AJW, the dominant promotion, actually being rather magnanimous, realizing that there was big money in continued shows, so everyone got to look competitive and strong (titles even change promotions!).

When I first got into puro stuff in the early 2000s, this was one of the “Holy Grail” shows in terms of “stuff that had to be seen”. Unfortunately, joshi was very hard to come by back then unless you had deep pockets, so it wasn’t until YouTube uploads became common that I saw much more of it.

HOW THIS IS SET UP:
I’m doing this in two parts, because I’m long-winded and it’s a five-hour show. There’s a handful of information up front about the nature of Joshi you can skip if you don’t care about it. Every match is prefaced with stuff in italics about who the performers are and their general gimmicks & careers, just so it’s not all “here’s some Japanese women you don’t know”.