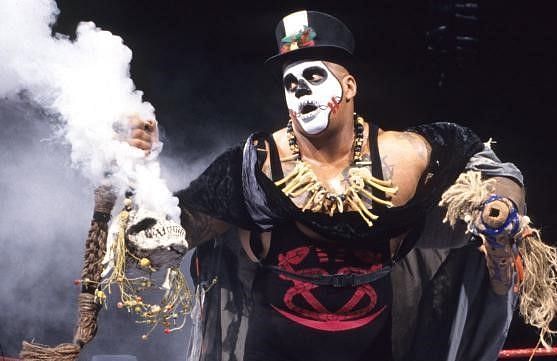 Possibly the greatest variance in quality between a wrestler’s visual appearance/gimmick and their in-ring ability.

Welcome back to more Dream Matches! I have some extremely rare stuff for you tonight, as the dreaded “1993 WWF” rears its ugly head once more, giving us a pair of beauties- Mr. Perfect vs. Papa Shango and The 1-2-3 Kid vs. Bastian Booger! Talk about main events in any arena in the country!

Then it’s a look at a crazy WCW rookie team I’d somehow managed to miss entirely- our own Oprah Noodlemantra turned me on to The Pit Crew- Dale “Demon” Torborg & Chad Fortune as guys decked out as WCW racing team pit crew guys. Naturally, their opposition is the Dream Matches favorite squad of Mean Mike & Tough Tom- Disorderly Conduct!

Then it’s the most “1996 WWF” match I could find, as it’s Jim Cornette dream match Barry Windham vs. Tony Anthony… except it’s the worst incarnations of both men- The Stalker vs. T.L. Hopper, in The Stalker’s debut! Then it’s more WCW jobberhood, as Al Green gets set up against Lash LeRoux! And finally, one of those great WCW weirdo mismatch bouts that inspired this column in the first place, as High Voltage face WCW’s lowest-tier luchadores- Ciclope & Galaxy!

MR. PERFECT vs. PAPA SHANGO:
(WWF Mania, March 5th, 1993)
* One more from the semi-short run of Papa Shango, where he faces a rising Mr. Perfect. Shango had by this point been jobbing all over the house show scene to guys like Undertaker & Bob Backlund, but was beating El Matador & Typhoon around the horn as well.

Shango catches Perfect doing a taunt on the ropes after the bell rings and tosses him, shouting something that Lord Alfred says must be an appeal to “the greatest god there is in The Occult” like that’s a religion. Monsoon questions whether or not he was into said things, but Hayes responds “No, but I once had a girlfriend who was”. Perfect ducks under a fist and throws punches and his trademark extended dropkick to send Shango over the top and to the floor. He kicks Shango’s ass out there, but gets tossed into the corner once back in the ring and we’re back from break with a chinlock, Shango using the ropes a bunch- Perfect FINALLY makes the comeback after more than a minute of that, knocking Shango down and hitting his necksnap. An elbow gets two, but Shango pulls him into the turnbuckles- he misses a headbutt to the gut, though, and Perfect immediately catches him with the Perfect Plex for the win at (4:57).

Very simple, direct match- Charles Wright was a HORRIBLE worker and could really only do simple spots and chinlocks, so Perfect actually had to be an aggressive brawler here, carrying both the offense and then the selling, going into the corner to get some heat on the heel. Then it’s a long chinlock (1/4 of the match!) and another simple comeback nets Perfect the win. 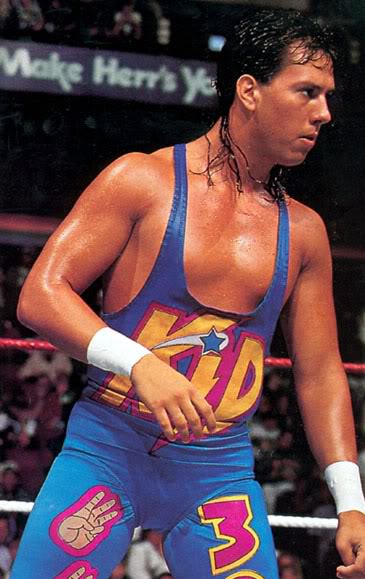 The Kid’s “Underdog” angle led to a lot of potentially interesting midcard matches with a result that was actually in question.

THE 1-2-3 KID vs. BASTIAN BOOGER:
(WWF Wrestling Challenge, Nov. 7th 1993)
* The Kid’s underdog run continues here facing a somewhat-new Bastian Booger, who had already been established as a JTTS, what with a loss in his debut against VIRGIL (he won the rematch, but still). The Kid had picked up wins over Razor Ramon & Ted DiBiase (via distraction, in the latter case), but is decidedly the smaller of the two men here. Booger could definitely do some good “Big/Small” stuff in Stampede, but he’s way past his prime in 1993.

They lock up after the Kid gets a “1-2-3!” chant going, but Kid immediately sells Booger’s stench to the point he actually gets jumped and takes a beating- he still manages a kick series to drop Booger for two. He tries to use more martial arts, but gets caught coming off the ropes and powerslammed, making Heenan mark out on commentary. Booger dances instead of covers, but Kid goes ALL-OUT with giant bumps, getting whipped into the corner and back body dropped, putting over the size difference. Back from break with a slow beatdown while Jim Ross is just diving on Booger’s stench and filth, lol. A release butterfly suplex has Kid looking dead, but Booger misses an avalanche and gets rolled up for two. The Kid’s roundhouse kick gets two and he hits a missile dropkick, then a suicide dive! HUGE move for 1993 WWF! He does his kick series on the floor, Booger going to the ring, but the Kid climbs to finish and misses the Cannonball by a MILE and Booger hits a running splash for the three at (4:49)- THE BOOGER BEATS THE KID!!

I mean… the Kid is an underdog and you can’t keep that going while having him beat everyone, but BASTIAN BOOGER? This guy could only beat the Virgils of the world and you put him over the hot young star you’re trying to focus on? It seems really inexplicable, even though it tells the story of the Kid being undersized and having to take risks that don’t always pan out. Perfectly fine Big/Little match, albeit plodding for the middle half- the Kid’s great bumps to start and his high-flying to finish kind of told a good story and made him look like he was putting in a LOT of effort.

Rating: ** (good enough fun at the beginning and end, lame in the middle- good enough for ** I guess) THE PIT CREW (Chad Fortune & Dale Torborg) vs. DISORDERLY CONDUCT (Mean Mike & Tough Tom):
(WCW Worldwide, Sept 19th 1998)
* OH MY GOD!! I had no idea these guys existed! The Pit Crew are a lame-duck WCW team of Power Plant rookies that never made any TV show that *I* ever watched, and consist of a pre-KISS Demon Dale Torborg and good-sized do-nothing Chad Fortune dressed up as a NASCAR “pit crew”, which looks as horrible as it sounds. Like, two giant, ripped dudes and you stick them in full, baggy bodysuits? The bright purple, red & gold pit outfits could only exist in the era of Nickelodeon’s GUTS. Fortune wouldn’t last long in wrestling- despite being responsible for Bill Goldberg’s first loss (in a 1997 dark match!), the Tekno Team 2000 alum quit wrestling the next year and became a monster truck driver- Tony mentions they’ve seen him before, but this is the Pit Crew’s debut as a team.

DC attack at the bell, but earn double back-body drops, Fortune practically moving in slow-motion. They trade off on armbars for Mean Mike, Torborg hitting a gutwrench suplex, but he gets caught with punches. Fortune does a blind tag and they hit a drop-toehold/elbowdrop on Tough Tom for two- Fortune is distracted when Mike breaks up the pin and eats a clothesline, but gets a belly-to-belly suplex. A bad double-pump kick puts Tom down, but Mike comes in only to whip Fortune into his own partner and get taken down with a clothesline, and the Pit Crew finish with a Backdrop Suplex/Jumping Neckbreaker at (2:58).

Hm, some pretty good tag team cohesion here, as the Pit Crew themselves did quick tags and even had a few slightly more advanced sequences than most Plant guys get- stuff like the whip of Fortune into a running knee in the corner while Torborg took out the other guy was pretty good. Even Larry Z was somewhat appreciative. Granted, they probably practiced this a LOT, but it’s not your usual Plant bout. Why, I didn’t even see The International!

Just dreadful- you got Barry Windham and THIS is the role you’re giving him.

THE STALKER vs. T.L. HOPPER:
(Sept. 9th 1996)
* The most “1996 WWF” match I can think of this week, it’s Barry Windham’s weird face-painted bounty hunter babyface gimmick up against the wrestling plumber! This is actually the DEBUT of The Stalker character, with poor Tony Anthony already standing in the ring like a total jobber, kissing his plunger. Well, at least he had theme music (the “toilet flushing” one).

Poor Barry gets shafted IMMEDIATELY, as the bell has barely rung before we go to the back with Owen Hart & Brian Pillman, talking about how Pillman reunited Owen & Bret- we can barely see the Stalker handily win a brawl, frequently tipping Hopper over like a tree with back elbows. Hopper’s good at the “got knocked on his keister” sell, though. Stalker hits a gutwrench suplex and a bad kneeling clothesline move and gets backdropped out of a piledriver (REALLY telegraphed- he pretty much just sets it up to be reversed). But he recovers immediately, beating up Hopper and hitting a dropkick for two. Jim Ross won’t stop talking about “The return of Razor Ramon and Diesel” (oh god) until the last 30 seconds of the match when they finally get on-topic. Stalker hoists Hopper up and pretty well deadlifts him into his Superplex finisher at (3:30). They CAN’T have meant much for the Stalker, given how they just discussed other things during the bout.

AL GREEN vs. LASH LaROUX:
(WCW Worldwide, Dec. 11th 1999)
* A random Worldwide match, with Green in yellow & green shorts, built almost exactly like a 1980s WWF guy- like, BIG without being ripped. Hilariously, he has a little “puff” of platinum hair on the very back of his head- what even IS that? Lash is now getting a push I think, emphasizing his “L”-shaped sideburns. He’s in long black trunks.

Lash gets shoved around, but uses his speed before getting dropped out of the corner. Al throws shots, but Lash gets a sunset flip, only to dance and get clobbered again. A big gutwrench tilt-a-whirl slam gets two, and Lash gets tossed, then eats Baba Chops and a press-slam. Al shoves him into piledriver position, throwing some forearms to keep him from fighting, but Lash lunges forward in a unique counter, leaving Al selling his balls. This sets up the Whiplash (fireman’s carry to sit-out bodyslam) for the win at (3:28). Pretty basic match, dominated almost entirely by the big Al Green, with Lash just getting a come-from-behind win off a somewhat cheap shot.

HIGH VOLTAGE (Rage & Kaos) vs. CICLOPE & GALAXY:
(WCW Saturday Night, April 12th 1997)
* oh YES- Power Plant rookies vs. the lowest-ranked luchadores! What a dream contest! Ciclope is of course most famous for Dean Malenko disguising himself as him via the full-body costume, while Galaxy is just Damien 666 in a mask to not damage his reputation or whatever by jobbing. What’s funny is Galaxy first had the plainest “I just bought a longsleeve & pants with a red overshirt” look I’ve ever seen in wrestling, barely spending $5 on his gear, but here looks like Jushin Liger with this black & orange armored bodysuit. Voltage are in their black singlets, while Dusty Rhodes declares them to be similar to the young Steiners.

Rage & Galaxy start, with The International leading right into Ciclope’s springboard dropkick, then he assists Galaxy’s springboard into a splash, but Rage tosses him off at one. Ciclope gets caught on a cross-body and eats a backbreaker & Kaos’s slingshot splash (Ciclope’s too close to the ropes and gets knees in his back as a result). Rage hits an overhead belly-to-belly to make the Steiner comparison REALLY apt, pulling him up at two and hitting a nasty front-facelock. Kaos adds a camel clutch as they work heel- Ciclope finally escapes after a double-clothesline, but nobody knows who Galaxy is so it’s not a very hot tag. Kaos just eats him alive anyways, and they hit their finisher, a Springboard Doomsday Device Roundhouse Kick, for the win at (3:36).

Ciclope did a heck of a job selling in this squash, as Voltage kept up on his lower back and he kept selling it as pure agony (unless he was legit hurt and they weren’t picking up on it, haha). The kids just ate him alive, then squashed Galaxy when it was his turn.