Welcome back to more Dream Matches! So if you’re a fan of Sick Boy, you probably know the legend of him almost getting a big WWE push with the “Katie Vick” storyline, until he was cut loose for less-publicized reasons. Well come look at one of those reasons, as he faces OVW’s Prototype (a young, even more roided John Cena) in a Dark Match on RAW!

Also today, we’ll take a look at the DRAGON KID of all people making WCW TV, as he takes on Psychosis! Then some WCW Saturday Night goodness as it’s Wrath vs. Kenny Kaos! Also more of my “Essa Rios” series, as he takes on Crash Holly in early 2000! The Repo Man vs. “Superfly” Jimmy Snuka in 1993 (yes, Snuka was around EVEN THEN!)! A very “WCW Squash Match” as Lash Leroux goes up against Tommy Rogers of The Fantastics in 2000! And we end things with another WWF match, as Virgil gets fed to “The Narcissist” Lex Luger, shortly before his repackaging!

GUEST REFEREE JACQUELINE:
THE PROTOTYPE vs. SCOTT VICK:
(WWF RAW Dark Match, June 2nd 2002)
* Yes, this is a very rare match between John Cena and Scott “Sick Boy” Vick, back when Vick was in developmental. Prototype’s in blue & silver shorts, and Vick’s in black shorts, and is actually taller than Cena, I think- just lankier.

We’re joined in progress, both doing headlock-into-shoulderblock spots to eerie, dead silence. Vick lands on his feet from a hiptoss… but just does another headlock. Vick gets a spinkick for two, but Stinger Splashes onto nothing and gets clotheslined. Prototype stomps & chokes away (“I know I got five!” he shouts to Jackie- did Cena inspire Bryan?), then calls some spots loudly on-camera (boy, sure glad he fixed THAT). Punches, chinlocks, suplex… god this is boring. Spinebuster gets two, but Vick gets a jawjacker after Cena argues with Jackie over the count. Vick throws punches to crickets, and hits a belly-to-belly suplex for two. Slingshot elbow gets two, but Vick goes into the corner. He comes out with a clothesline, but Prototype ducks and hits the Protobomb (backdrop suplex to side sit-out powerbomb) for three (4:44) shown.

MAN, who taught Vick how to show character? Because I can’t recall seeing a blander, more blank-faced guy out there. No flourish, no “Yeah!”, no nothing- Even Jim Powers knew how to connect more with an audience than this! At least Prototype knew to argue with the ref, but didn’t show any other heel mannerisms.

WRATH vs. KENNY KAOS:
(WCW Saturday Night, Dec. 12th 1998)
* WOOOO!!! Two hallmarks of WCW- Kaos in singles matches on D-shows and Wrath on his mini-Goldberg run! Though this is shortly after Nash halted it. Kaos is in silver gear I haven’t seen before, and Wrath has a white top and black shorts for his singlet- Wrath is MUCH taller, but Tenay correctly points out their body weights have gotta be pretty close.

Interesting start, as there’s a stand-off in a lockup and the ref has to separate them- Wrath backdrops out of a headlock and drops rapid elbows, but takes a shot and is suplexed for two. Wrath slugs him and starts choking in a variety of positions, just overpowering the kid, but Kaos reverses a whip to the railing and smashes Wrath into the ring apron. But Wrath attacks him when Kaos re-enters the ring, so quickly that Tenay suggests Wrath was “playing possum” by selling, which is either a slag that he wasn’t selling enough or just him burying Kaos, haha. Side slam gets two, and Wrath stuffs some comeback attempts and methodically throws stomps. Kaos gets his foot up in one corner and hits a running lariat into the other, but Wrath reverses a whip and hits a shoulderblock, then slowly puts Kaos into the Meltdown (pumphandle powerslam) for the win (4:44). Well that was a sudden ending.

Actually not bad! For a bit! I mean, Wrath was no ring general and Kaos was still green, but they knew their limitations and knew how to be hosses, so they just pushed each other around and threw their weight into each other. They were defaulting to “plodding kicks to the gut” and forearms by the last half, though. And the ending was kinda out of nowhere, as a basic shoulderblock shouldn’t be all you need for a set-up move, even on Kaos.

Rating: *1/2 (started pretty good but ran out of steam)

WWF LIGHT HEAVYWEIGHT TITLE:
ESSA RIOS (w/ Lita) vs. CRASH HOLLY (w/ Hardcore Holly):
(Feb. 14th 2000)
* Shortly after Essa’s debut under this name (JR mentions him as having been Papi Chulo), he takes on Crash the day after beating Gillberg to end that run with the Light Heavyweight Title. This is apparently Lita’s first appearance on RAW! She’s in a silver halter top and red pants this time, and Essa’s in red tights.

They both use acrobatic reversals of wristlocks, Rios immediately impressing with his spinning variation of the springboard to escape, then hits a tornado DDT while Hardcore Holly does lame commentary, rambling about being super-heavyweights. Crash trips Rios into the ropes and stomps away, but gets caught with a neckbreaker out of the corner for two. Crash bails, pointing his head to indicate intelligence, and naturally gets caught with a rana off the apron, and then to start off the tandem gimmick, LITA does the same move. Hardcore can’t stop cracking up on commentary (“Now that is an embarrassment right there!” while laughing) as Rios hits a suplex and Crash super-obviously gets into position for the Moonsault, which finishes for Rios at (2:39), Lita then does THAT move, too! Hardcore laughs even harder (“I’m ASHAMED!”) as poor Crash is just a glorified tackling dummy here, being squashed to put over the new guy. 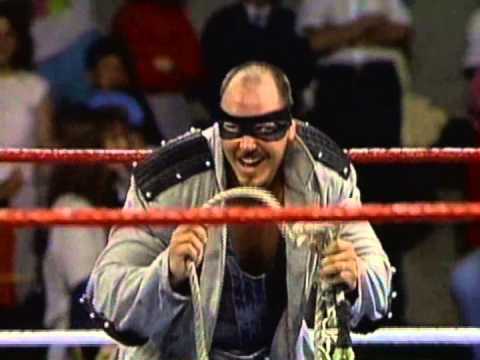 I was a huge fan of both Smash and the Repo Man. I didn’t know they were the same dude until I searched “Wrestler’s Real Names” on the interweb in like 1999.

THE REPO MAN vs. “SUPERFLY” JIMMY SNUKA:
(WWF TV, March 16th 1992)
* The Repo Man was a new act at the time, so his early push (where they have to elevate him without damaging anyone important, in order to convince the fans he’s a real featured guy) involves matches like this- beating up a washed-up Jimmy Snuka (who was on the job squad in *1990*, for God’s sake!). Superfly’s still ripped as hell, but has long tights and boots in a weird look. It’s funny seeing them come out one after the other, because you realize the voice at the beginning of their theme songs is the same dude with the same electronic modification.

They waste a minute with hesitancy before locking up, Repo Man scoring a cheap shot and laughing- it’s funny watching the huge Barry Darsow do such a prominent “stoop” to appear smaller and more sniveling. He does a back body drop and plants Snuka over his knee, but misses an elbow (Snuka rolling out suuuuuuuuuuper slowly) and Snuka works over his wrist very slowly. Repo rakes the eyes to escape, but runs the ropes into Snuka’s karate chop and then an armdrag. Snuka puts his head down and gets clobbered a bunch, and a backdrop suplex gets two for Repo. Repo works a neck-vice and scores a knee, but makes the mistake of ramming Snuka’s head into the ropes, and Superfly barks his way to life and starts beating on the Repo Man, doing a garbage middle-rope cross-body for two and Repo immediately charges in and slugs him. But then he Ken Pateras into the corner and gets backdrop suplexed. Snuka goes up to finish, but takes all day to get there and does a back bump (effectively missing a Swanton Bomb instead of the Superfly Splash) and Repo Man rolls over for the win (6:49). Haha, all that time for a BANANA PEEL finish?

Pretty weak match, though not actively bad- just slow and lame. Lots of wristlocks and backdrop suplexes and other basic offense, with Snuka being too coked up to do much with any kind of speed or authority. And booking that finish is pretty weird- it only barely puts Repo Man over (hardly a decisive win) and makes Snuka look dumb.

PSYCHOSIS vs. THE LITTLE DRAGON:
(WCW Worldwide, Oct. 11th 1998)
* The Little Dragon, looking like a mini Ultimo Dragon in gold, is actually the Dragon Kid of Toryumon & Dragon Gate fame… which Mike Tenay actually says right here, which begs the question as to why they changed the name. Psychosis heads up this “Feature Match”, wearing his black with white gear and absolutely dwarfs his opponent- he’s a deceptively tall luchadore.

Psychosis wastes the first couple minutes complaining about “hair pulls” after getting armdragged to the floor- he takes over with brawling and a chinlock, but charges right into the ringpost. LD buggers some spinny armdrag thing so Psychosis smartly just plants a knee on him to act like it was on purpose… then he just hits a sit-out front suplex and the Guillotine Legdrop to finish at (3:06). Well THAT was fast. I mean, it was always gonna be a squash, but still that was outta nowhere.

LASH LEROUX vs. TOMMY ROGERS
(WCW Saturday Night, March 25th 2000)
* Now THIS one is interesting to me- Tommy’s one half of the Fantastics, an ’80s tag team, but is a decade out of his prime at this point, now jobbing on Saturday Night. Tommy’s in blue trunks & Lash is in grey tights.

They stay mobile to start, Lash catching Tommy with the “Eddie Bump” and dropkicking his knee out, but Rogers lands on his feet from a backdrop and hits a pumphandle release toss. He goes up, but leaps into a powerslam for two, then gets tossed- they kinda mis-time a deke-out sequence on the outside (Rogers is a hair too slow), Lash getting the worst of it. They fight on the outside, and Rogers reverses Lash’s dancing punches and has him in trouble, but they slug it out and Lash reverses Tommy’s running slam into his finisher- he hooks the head like a Stone Cold Stunner, then hooks the leg and sweeps him back- the “Whiplash 2000” finishes at (4:08). Wow, that actually looks pretty vicious- I wonder why nobody stole that.

The match was… mostly fine, but was kind of an old, past-his-prime vet leading everything, making Lash look a bit awkward because the timing was off. I get that you don’t want to use a vet as a jobber, but Lash kind of looked like a dunce bumping around for him the way he did.

Rating: *1/4 (more competitive than a Saturday Night match tends to be, but mostly super basic except for the ending) The man, the myth, the legend.

“THE NARCISSIST” LEX LUGER vs. VIRGIL:
(WWF Wrestling Challenge. Feb 21st, 1993)
* The Narcissist is just getting going, taking Ric Flair’s place in the feud against Mr. Perfect. Luger has the mirror on the floor instead of in the ring, with Heenan going on and on about his physique (Heenan, much later, would humorously talk about how afraid he was this would come off as gay), shouting “Eat your heart out, bimbo!” to a woman spotted admiring him. Luger takes FOREVER posing, Monsoon complaining that he wasted so much time they gotta go to commercial! Luger even says “Don’t you EVER go to commercial… while I’m posing!” when they head back.

Luger easily powers Virgil back repeatedly, but Virg ducks under him and throws the boxing jabs and avoids a charge, but Luger catches him out of the corner with a big clothesline, gears up the Running Forearm Smash, and BAM! Virgil’s flat-backed with his arms out, and Luger kneels down and pins him with ONE FINGER (1:02) in one hell of a dominating victory. Poor Virgil! But a big early match for the Narcissist, whose forearm was first being treated as an unfair advantage, but would soon turn into a babyface killshot.

Rating: DUD (not even a match!)