A bit of an old school review for me on this Easter weekend, as I was thinking about how as the eighties rolled into the nineties and my interests expanded to include Teenage Mutant Ninja (Hero over here) Turtles and wrestling, which both combined together at different times in the comics, cartoons and toylines of TMNT. So, this is a look at some of those occasions across the various iterations we’ve had over the last 35 years. From the Archie Comics line, which bounced off the back of the cartoon and started doing some different (and sometimes more interesting) things from the show. This is issue 7 and follows the initial comic run-ins with mutant manta Ray Fillet and this continuity’s version of man-gator Leatherhead, with disembodied giant alien cow head Cudley the Cowlick abducting the Turtles from the sewer during a recap segment and spitting them out on the Stump Asteroid, from which emanates Intergalactic Wrestling. Stump, a fairly obvious Trump parody, plans to broadcast matches involving the Turtles for his audience before he’ll return them to Earth. Their opponent? Four-armed, Elvis-impersonating, alien bulldog Cryin’ Houn’, who if they beat they will then go onto wrestle Ace Duck, who here is a big, buff bodybuilder grappler, not a pilot who can fly inside or outside of a plane. Ace’s opponent en route to the showdown? A masked version of Leatherhead.

It’s a fairly light issue, with the artist having fun with creating different alien audience members and giving the Turtles new outfits (which I’ll be shocked if toy manufacturer NECA doesn’t make figures out of eventually). Don gets a quasi-Japanese outfit, Leo gets a samurai suit, Mikey gets a fuller face mask and Raph gets an allover black bodysuit, which was so cool that he kept it for a few issues and was reluctant to give up. There are a lot of goofy one-liners and rhyming puns (“Saved from the jaws of sad death by the jaws of bad breath!” and “Better a Leatherhead than a featherhead!”) to roll your eyes at. Stump is the stereotypical money-hungry promoter with his money tree/man Sling a typical sycophant. 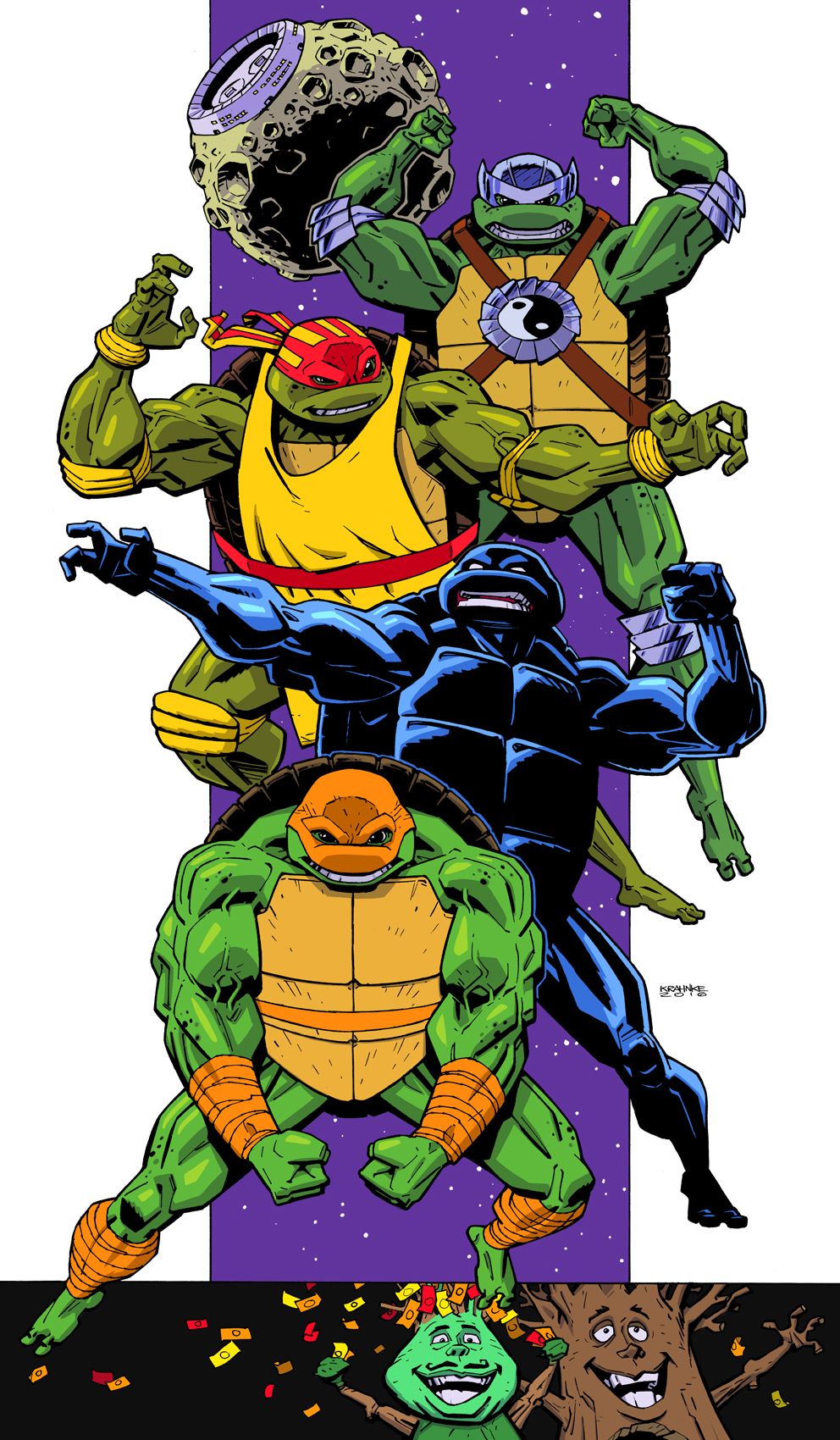 Both qualifying matches go on simultaneously, so the artist switches back and forth between them deftly. The experienced wrestlers dispatch their opponents quickly, but Ace’s overconfidence is the weakness Leatherhead exploits. Leo cuts into Cryin’ Houn’ cutting an ongoing promo with a dropkick, which gives his team the victory and their seeming ticket home, their weapons returned to them. Leatherhead would be welcome to join them on the trip back too, but the former Jess Harley, changed from human trapper to mutant animal, realises he’d be an outcast back on Earth and decides to stay as the new Intergalactic Wrestling champion. The Turtles return home after a brief (preachy) mishap that lands them in a dystopian future where the world has been destroyed due to global warming. Might’ve been more effective if the point was made in more than just one page as opposed to being bolted on, but such was the way of this book at times.

From the original series, with the villains back in Dimension X after spending the third season on Earth. I thought that was a bit of a disappointment and wasn’t initially keen on the concept, but the episodes retained their overall quality before starting to dip off in the fifth season. This episode is not to be confused with the hour-long special from that season called Planet of the Turtleoids, which I remember mostly for being premiered in the UK the same day as WrestleMania VIII and was recorded onto the same fresh new tape that the Hulkster’s “final” match would be on later. The Turtles are watching TV from other dimensions, including turtle wrestling matches, at the same time as Shredder and Krang watch the same show on the big screen in the Technodrome. Krang sees a device on the commercials called the Personal Energy Projector (only $19.95!), which he plans to use to drain Earth and restore the Technodrome. Shredder steals it and the pitchman, Rupert, and Hans and Feets, the wrestling Turtlenegger Brothers, end up following him. This leads to a line where one of the boys threatens to tie Krang’s “tentacles in knots”… I’d always heard it in the first place as testicles, not tentacles. 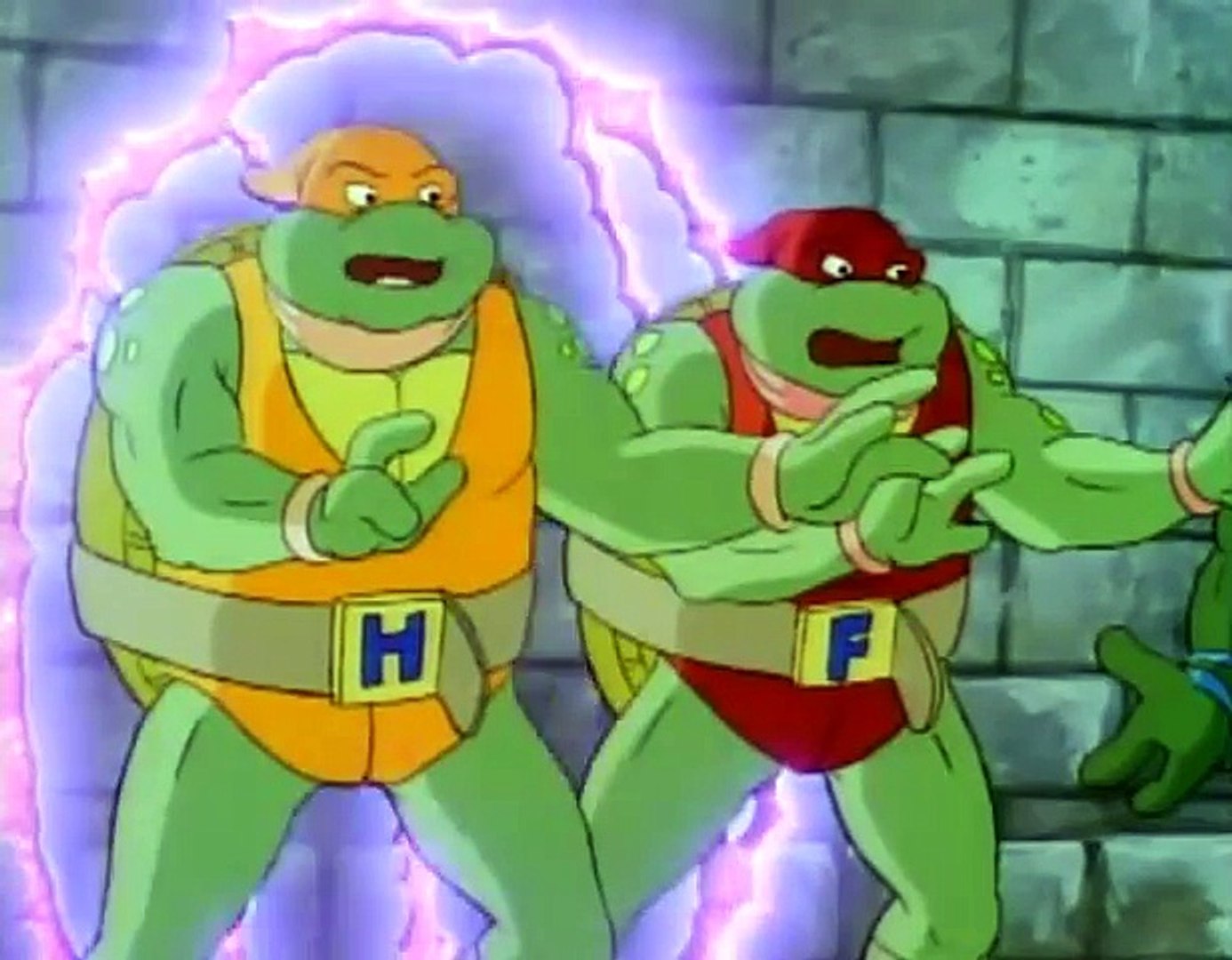 Rupert annoys Krang and gets kicked out of the room, with the Turtlenegger Brothers forced into service at the end of laser rifles. Krang begins draining Earth of its energy, with April on assignment being the first to feel the effects of it. The Turtles just about save her and Vernon, inadvertently finding out that they’re immune from it themselves. The world is said to be half-drained in a matter of seconds, but Krang and Shredder spy that the Turtles are still out and about, so sic Hans and Feets on them, who bring them to Dimension X. Splinter is called in by April for backup.

The Turtleneggers tie up the Turtles by throwing them in the ring, which in this case is circular. Splinter and April conveniently find a portal that takes them to help them. Rupert and the Turtles end up meeting in their cell, where Rupert gives away that the PEP is a bunch of junk and will lead to a major explosion, so they travel back to the Planet of the Turtles to find the inventor of the device, Doc Turtlestein.

It’s got the typical humour of a Turtles episode, while having plot holes you could drive the Party Wagon through. To firmly place it in 1990 it’s got a Saturday Night Live pastiche that was probably forgotten by most by 1991. I liked the show at the time for the fact that it was breaking the fourth wall and making fun of the genre, which needed a bit of a needling in order to force a reinvention, even though the flat ending with Splinter berating the Turtles back home for not cleaning the refrigerator is self-defeating.

Rise of the Teenage Mutant Ninja Turtles – Shell in a Cell 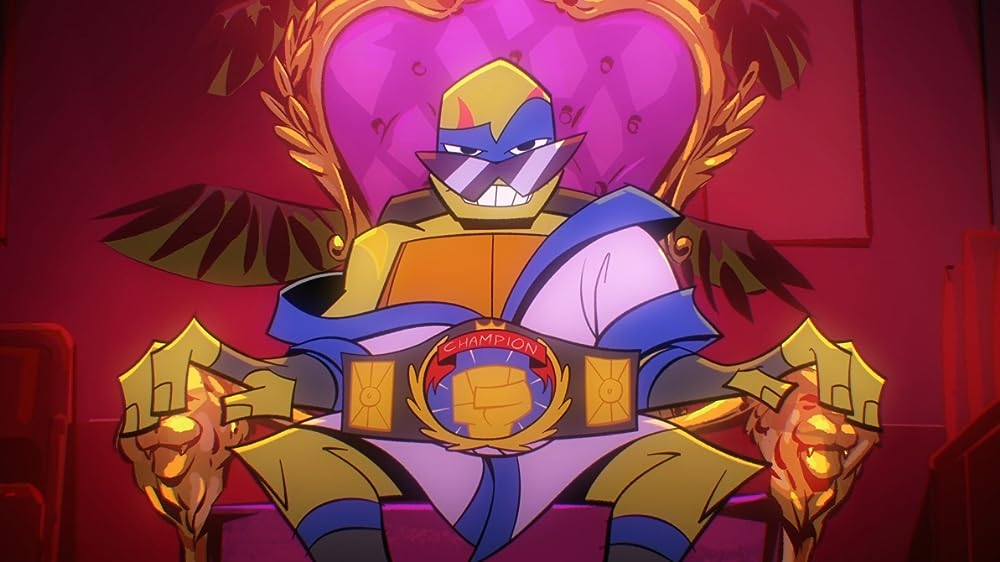 The most recent (and much-maligned) version of the Turtles in the small screen, the episodes are down to ten minutes now. A blonde Bret Hart lookalike is taken out in seconds by massive luchador Ghost Bear and musclebound destroyer Annihilation. The Turtles watch from above the ring as Ghost Bear mark Raphael cheers him onto his 200th straight victory. Leonardo pours scorn on the proceedings, saying it’s all fake, then falls off the lighting rig and onto the champion, taking his belt by default. Promoter Jessica plans to reinvent him as a new star, to Raphael’s annoyance, who thinks Ghost Bear should still be the champ. Michelangelo sides with Leo, becoming his Don King-like hype man. 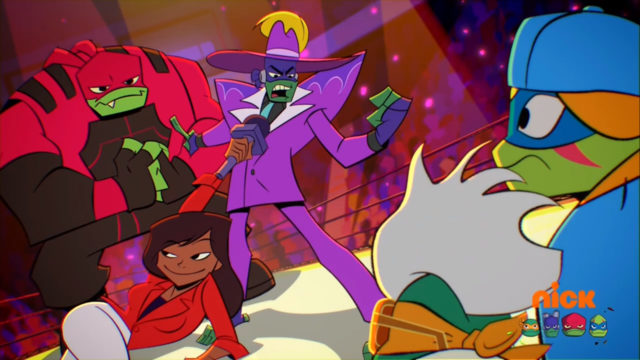 Leo is dressed up in John Cena gear as Prime Time, with Donatello wearing a purple pimp suit and becoming Raphael’s manager when he challenges the new champ as masked mauler Red Rage. It’s almost lights out for Leo until Ghost Bear reenters the fray during a blackout. This leads to a triple threat cage match, with Raph trying to pal up with his idol but getting brushed off. Leo is catapulted off the ropes into the side of the cage, then Ghost Bear reveals he cheated in the first place to become a champ, using dust in the eyes to get the advantage. Betrayed by this, Leo and Raph double up against him, with the hype man and manager getting involved too. Mikey uses a lobster weapon to swing it back before Leo literally kicks Ghost Bear’s butt. Jessica, who’s already doubled up as promoter and referee, tops the pile-on and wins the championship belt, which she awards herself in a fix. 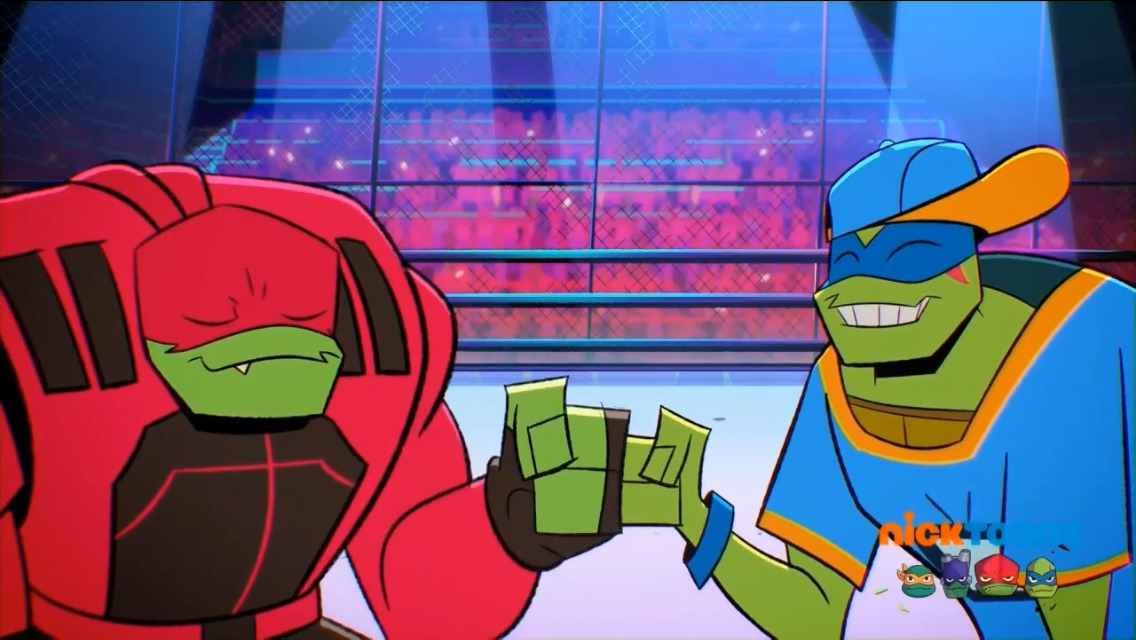 Super-accelerated plot, which is to the detriment of the show as the story itself was good enough to carry on for another ten minutes with a bit more nuance. This show didn’t take off, but I liked it and it knew well enough to have a few moments of sustained comedy before speeding ahead.

Melting it down: Some harmless fun, with emphasis on the fun part. I’m surprised that the Turtles, who have been mashed up with wrestling a few times now, have never been given a special crossover mini-movie with WWE akin to Scooby-Doo or the Flintstones, but maybe the moment has passed.