Here’s a review from the minimal post-1990 episodes of Prime Time on the Network, this one selected as it’s the buildup to Hulk Hogan’s last appearance, because he went to Hollywood and became a star and was never seen again… Anyway, it’s the thirtieth anniversary of this episode, a time when I was a young and very keen fan, so let’s give it a look. 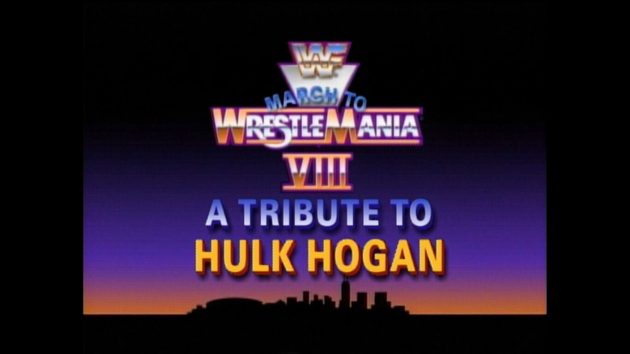 The format is Vince in the studio, tuxedo and all, introducing clips of Hulk’s greatest moments and matches, culminating in a sit down interview with the Hulkster. Some new matches mixed in too, everything with then-contemporary commentary.

Hulk Hogan vs. Andre the Giant

From WrestleMania III, with Gorilla and Bobby providing new commentary in place of Jesse Ventura. Now, I think if Jesse was still around they would’ve still done new commentary, but his departure and lawsuit definitely seals the deal. I won’t do much play-by-play on the classic matches, because we should know it move-for-move, but will speak on the commentary. Bobby says it was so loud at ringside that he couldn’t get messages through to Andre so they had to use signals. Gorilla: “Did you ever stop to think the big guy just didn’t want to listen to you?” Bobby still argues that Andre won on the failed Hulk slam at the start. I’m sure we could’ve just had the clipped version of this match, but we’re getting all of the legendary quality anticlimax. Heenan gets to call his own instructions from ringside. Gorilla asks why we never saw Bobby’s white captain’s suit again (“Did you get it dry cleaned and burnt?!”). No cut away when Andre headbutts “the post” (actually his thumbs). Bobby’s apparent advice when Andre got knocked down with the clothesline and he went over to him in the ropes? “Get up, you big dummy! You’re costing me money!” Bobby of course claims the slam was the first time Andre was ever slammed, which obviously it wasn’t, and the legdrop hits for the successful title defense. The Brain laments his missed chance at immortality. Crap match, legendary moment.

Quick recap of the Hulk/Sid Justice issue, going back to them becoming friends at Summerslam, falling out at the Royal Rumble (with fake commentary), then Hulk being named as the initial challenger for Flair at WrestleMania in instead of Sid, Savage, Piper or Undertaker to Sid’s displeasure (and he’d worn his best tracksuit too!), Sid feigning making up with him and leaving him to the wolves on Saturday Night’s Main Event to go fully heel. In the latter case, they were obviously trying to recreate the Main Event II, but turned down several notches. Sid then threatened to rearrange Brutus Beefcake’s face on the Barber Shop, smashing the joint up, leading to one of his classic “Oh, Sid!” moments when some talcum powder exploded in his face. No face rearrangement for Bruti, but Virgil wasn’t so lucky, leading to him wearing a nose guard for a few months. Hercules infamously no-selling the powerbomb at MSG is also included so that they can bury him too. Pretty good recap given that it’s not the most stellar or well thought of feud in history.

I’m pretty sure this has been put on a few DVDs and videos in the past. Sherri has her matching jacket to go with Shawn’s. Shawn lounging on the top rope was used in a photo somewhere. Non-title match, but Shawn was being positioned as the next challenger for the IC belt already and it was heading in his direction eventually. Bobby gets disgusted by a woman in the crowd who sticks about four fingers in her mouth to whistle, which Gorilla misses. Sherri tries to mock Roddy by looking under his kilt and laughing, so he pats her on the ass on the way back to Shawn. The eventual split between Shawn and Sherri was already being teased by comments on how she was the one dishing out all the affection to Shawn and getting nothing back. Roddy spits in Shawn’s face off a rough breakup in the ropes to a big pop, so they get into a slapfest. Shawn does a strange rolling cradle block of an atomic drop. Sherri gets up to protest something, so Roddy sends her back down with a big kiss. Shawn clotheslines him out and attacks on the floor. Back in, it’s pretty masterful with how low risk they’re going with the attacks back and forth, barely bumping but selling everything like mad. Sweet chin music for Roddy off the ropes, but it’s just a move at this point, so Shawn sets up for the teardrop suplex and gets punched in the nose. Roddy dishes out some chops, but gets poked in the eyes. Reversed Irish whip sees Shawn land on the ropes and get punted into riding the top strand. Kneelift into the corner sets up the bulldog for the finish, but Shawn runs Roddy into the ref for a bump. Sherri chucks in her boot for Shawn to knock out Roddy with for the visual pinfall. Bret Hart comes in to protest, throwing the boot into a revived Roddy, who swings and misses and gets disqualified for it. One of those occasions where the DQ was absolutely the right way to finish. Roddy and Bret get into a nasty spat afterwards, with Bret sarcastically throwing in the belt to Roddy to pick up. Really good forgotten classic, Shawn was someone Roddy really wanted to see succeed and they probably had a lot more in them.

Recap of Ric Flair’s attempt to STRIP Elizabeth of her dignity (at least it’s not the way Andre had his taken), with WWF Magazine printing pictures of the Naitch and Elizabeth apparently in a prior relationship. Upon looking at a picture of them petting a horse: “There she is with her two favourite studs!”. Ric was awesome in these interviews, but he can’t pronounce “dubya” properly.

Hated the music they gave Ric during this run! Ric is trialing the all red look, but with his black and red boots and black and silver robe. The Brain promises he has a new robe ready for WrestleMania that cost $50,000. Flair and Brunzell actually trained together with the Iron Sheik. Chops in the corner and a back suplex set up a kneedrop for two. Perfect wanted him to finish it quick, but doesn’t seem in keeping for the Nature Boy to not give his opponent a few shots first. Jim blocks a punch and gets the dropkick for two. Sleeper to finish, but Flair turns it into a kneebreaker and the figure four draws a quick submission. “He’s from Minnesota, they’re all quitters from there!” claims the Brain, forgetting Flair and Perfect are from the same place. Alright match, extremely accelerated.

Special interview with Elizabeth at her home, with a lot of leg on show. Liz is pissed off in her demure way about the photo situation and Randy is heading to the magazine headquarters to show them the REAL pictures. Vince asks the tough questions in his insincere way, probably drooling out of shot. “Do you feel wulnerable (sic), Liz?” Liz hopes for vindication when everyone sees the real pics.

“Do you feel you’ve been scarred for life?”

Hulk Hogan vs. The Ultimate Warrior

Again, Gorilla and Bobby on commentary in the then-present. Looks like they’re going to show the full match too, but no review from me on much other than the commentary. Gorilla talks about how Mr. Perfect was teasing a massive centerfold picture of Liz at WrestleMania, which probably would’ve sold like crazy if we were in the era of them doing that and not Sherri showing off the beaver in some clandestine jazz mag. Plug for the hotline while Hulk possibly has suffered a knee injury. Bobby has asked previously if he can call it collect but begs for extra change now. He also works in a story about needing donations for a busload of Taiwanese orphans he’s bringing to the Hoosier Dome, but Gorilla says last time he gave him use of the credit card Dom Perignon turned up on the bill. Those Taiwanese kids have expensive taste between that and the one helping himself to caviar apparently! Not much to say about the match, possibly purposely so in order to not show the hand of the big surprise at the end of WrestleMania, so Gorilla and Bobby just talk about whatever comes to mind with constant promotion peppered in. Hulk misses the legdrop and Warrior capitalises with the splash to give Hulk his one big loss in the WWF. Vince afterwards spins it that Hulk is both gracious in victory AND defeat, not breaking into laughter while throwing that out there.

Promo with Sid, who probably made a boo-boo by calling Hogan a “wrestler”. He’s a “fuel-injected suicide machine” himself, which is at least better than monkey hormones.

Recap of the Undertaker making the save when Jake Roberts went to wipe out Elizabeth with a chair, then getting it back on the Funeral Parlor. Paul Bearer takes a sweet DDT on the stage after Jake traps ‘Taker’s hand in the casket. Jake runs out of patience as he shrugs off chair shots and drags the casket towards backstage and just resorts to punching him. This went long, but the Undertaker looked really cool as an unstoppable monster.

Powers holds a headlock even through a back suplex. Eventually Jake sidesteps a charge and sends Jim outside in a pretty big bump. Back in, Powers ducks the short clothesline, but Jake gets it again on an attempted Irish whip. DDT for the win. Jake allowed Powers quite a lot here given how little he gave others at times in squashes.

Kinda surprised Kato isn’t brought up more these days given the eye design on his mask. He tries to hip toss Typhoon to no success, so Barry comes in and it’s no better for two trying. Earthquake comes in and powerslams Kato, but he crawls away for a tag after an elbow. Barry comes in to an atomic drop and jumping kick. Earthquake drops the big one for the win, not even bringing in Typhoon for the splash. Well, that was quick!

Interview with the Hulkster, in black WBF workout suit and red bandana. He gives a fairly subdued interview about having survived the previous tests but being nervous that he can’t overcome Sid Justice. He kinda says a lot of nothing, so Vince asks whether it’s going to be his last match. Hulk talks through the scenarios and then says he won’t really know until it’s over. Well, it wouldn’t, and this wasn’t that iconic a deal as it should be, but it felt like something big. Vince thanks him for everything he’s ever done, which is about the closest they would ever come to a nice ending together.

Melting it down: Semi-interesting show, with some decent modern matches, but they should’ve had more and shorter matches in the vintage reflection. Hulk of course did go, then came back to save the day and it didn’t really take, but it showed us there were other options out there and he was probably better off for having to do something else himself.