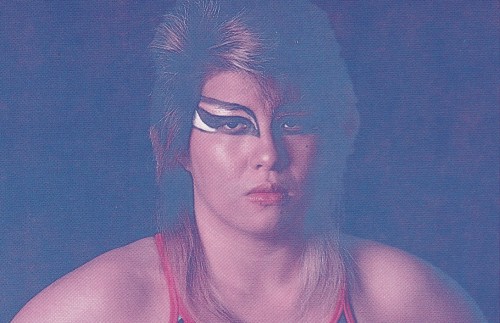 -One of the more-ignored wrestlers of the Atrocious Alliance/Gokumon-To stables of heels, Grizzly Iwamoto stands out a little bit because of two reasons: 1) Despite being too small to have the “Monster Aura” of Dump Matsumoto or Bull Nakano, she looks the most to me like the stereotype of a scary, vicious young hooligan; and 2) she is, quite possibly, the LEAST likely person you’d ever have expected to be named “Grizzly” (ally Bison Kimura shares a similar trait).

Grizzly Iwamoto only had a five year career, but it was part of the nutso “Crush Gals Era” in which she was a member of various heel stables, primarily Dump Matsumoto’s Atrocious Alliance. Sporting leather outfits and with wild, curly hair, she actually had the “Juvenile Delinquent” look that you often seen in anime & manga from the time period. So while she didn’t have the mass of Dump, Bull, Condor or Aja, she still came off like she was more dangerous than the honorable, upstanding Chigusa Nagayo & Lioness Asuka.

There’s not a great deal of stuff featuring her online (even matches on YouTube are scarce), but what’s there indicates she’s a perfectly-acceptable brawler with decent moves. In what’s probably her best match (the tag match I’ll review below), she is an excellent seller, doing great “falls straight back looking agonized” stuff, plays up being defiant against dangerous opponents, and gives good spirited comebacks. She fires off kneedrops with great intensity and precision, and can even hit a powerslam on AJA KONG, putting over both the difficulty of it and making the move look like it hurts. This to me indicates she’s a good “utility” wrestler- while not GREAT, and not likely to have **** solo matches, she can be slotted into any tag match and will go all-out and not negatively affect the match at all. You need those types.

-Kumiko Iwamoto debuted like a lot of AJW wrestlers in the ’80s, promptly turning heel- she joined a stable of masked wrestlers called “Dynamite Gundan”.  Calling herself “Dynamite Bear”, in her second year, she teamed up with Drill Nakamae to win the vacant low-tier Japanese Tag Team Titles (June 1987) and held them for about nine months before vacating them- possibly because Dump Matsumoto & Condor Saito retired, which left Bull Nakano without a partner. So by 1988, she took the name “Grizzly” and joined the Atrocious Alliance’s Bull-led offshoot, Gokumon-To (a lot of later Alliance members took up animal names over “construction vehicle” names), and replaced the retired Condor as Bull Nakano’s tag team partner, swiftly winning the vacant WWWA Tag Team Titles in Feb. 1988. They held them for 145 days before losing them to the Fire Jets- Mitsuko Nishiwaki & Yumiko Hotta. The Titles were traded around rapidly for the next year or so until Grizzly teamed up with younger wrestler Aja Kong to win the titles back, defeating the Fire Jets in their second run to win the WWWA Tag Titles back in Sept. 1989. This reign would only last 60 days before they would lose to the Marine Wolves- up & comers Akira Hokuto & Suzuka Minami.

In 1990, Grizzly would have what’s considered by most I asked to be her best match in a tag bout, teaming with Bull against Aja Kong & Bison Kimura. It’s got a pretty great performance by her- she goes all-out in throwing moves at Aja, sells her ass off against a series of weapon shots, and gives as good as she gets with a kendo stick. She easily does her fair share in the bout despite Bull’s dominance of AJW at this point. Then, two months later, Grizzly retired- a fairly short career, but AJW seemed pretty big on “yeah, we’re done with you- time to retire”. I asked around and there’s not much as to exactly WHY she was gone, so I couldn’t tell you the reasoning. Japanese YouTube comments (yes, that’s what I’m resorting to for research now, lol) suggest that she had a “lover” at the time and she was “mentally thin” and lost confidence due to this match.

I asked a Joshi expert named ShiroAbesPants on Reddit and he said “I’m not sure the exact specifics of Grizzly retiring. From what I gather based on the few stories I’ve heard, she was kind of a “cool” person who had a life outside of wrestling so maybe the time and dedication demands were too much. Pure speculation on that, though.”

Grizzly’s legacy isn’t much- she kind of misses out on the big stuff of Dump’s elite feud against the Gals, and was gone before the legend of Aja Kong was created- both Bull & Aja have more famous partners (Dump & Bison, respectively). Honestly, she comes off kind of like “Well, we needed an extra person to make a tag team, so…”.

BULL NAKANO & GRIZZLY IWAMOTO vs. JUNGLE JACK (Aja Kong & Bison Kimura):
(Aug. 19th, 1990)
* So now the dramatic Bull/Aja feud has set off, with Grizzly teaming with Bull and Aja going with Bison- the original Atrocious Alliance is now Bull’s “Gokumon-To”, but Aja is forming her own stable. Aja’s got a punk rock look with a giant green fluffy mohawk, and Bison’s in a bisected singlet in black & leopard-print (and look at that hair! So ’80s! All frizzed and huge!). Bull’s in blue hair and a Joker t-shirt & Grizzly’s in black with mesh arms & stomach, looking like she’s marching towards her execution.

We’re off and immediately the leaders drag the subordinates outside the ring to beat the shit out of them, Bull launching a million chairs. Back in, Bison bites Bull’s leg but gets piledriven for two, then Aja comes in and piledrives Grizzly, and Jungle Jack mat-slams her for a while. Bison & Grizzly yank the shit out of each other’s hair, but Bison lets Griz slap her a couple of times and then just hauls her to the mat and fires off a Bison Chop to floor her. Tombstone gets two and we hit a resthold, Bull coming in after to easily toss Bison around- she even dares her to try Bison Chops, no-selling two of them! But when she blasts Bison down, she actually does a great “huh, I actually felt that” rubbing her chin, haha. Bull continues the slaughter, no-selling more shots and using a lariat, hairpulling & choking, then tosses Bison like a sack of garbage to Aja, like “Bring it” with this casual disdain that’s awesome. Aja comes in for the stand-off, but a furious Bison is like “YOU WILL NOTICE ME, BITCH!” and just launches a series of attacks, Bull just kicking the shit out of her to teach a lesson now, then hits a piledriver for two, as Aja didn’t even tag in. Grizzly hits a flying move and an Oklahoma Stampede for two-counts as the crowd is starting to be impressed with Bison’s resilience. And she comes back with Bison Chops at the exact right moment, then tags Aja.

Aja immediately hits a piledriver and annihilates her trademark oil can over Grizzly’s head, and Bison just runs right back in, drilling Grizzly with a chair and even TOMBSTONING her on it! Before Hogan/Taker! The ref refuses to count that, so we’re spared it getting two, but Griz still bridges out of another piledriver cuz those moves still ain’t shit in joshi. Multiple instances of biting and now Grizzly is bleeding QUITE hard, so Bull comes in for the save (FINALLY), but they’re on her like a pair of vampires, biting away and hitting a double clothesline. But they try it again and Bull clotheslines THEM down, then hits Aja with a big lariat… but the beast won’t fall! Big reaction for that. They slam into each other to another reaction, but Bull fells Aja with another lariat and hits the Guillotine Legdrop for two, Bison delaying the count. Aja urakens out of another lariat and they both struggle to lift each other with power moves, and then Grizzly runs in with a kendo stick, battering the shit out of Bison and resisting her disarming attempts. She manages a DDT, but Aja tosses Bison her billy club and BAM! Grizzly’s now the one getting the shit beaten out of her.

Backdrop suplex gets two for Bison, but Griz gets tossed the kendo stick again and she spears Bison in the head and starts kicking her ass once more- she fends off both JJ members and Bull hits a backdrop hold for two to a big reaction. Northern Lights suplex- Aja saves. Bridging suplex- same result. She hits the sharpshooter, but Aja & Grizzly interfere with kendo sticks, and soon with get the iconic moment of Aja & Bison grabbing them and assaulting Bull with stick shots from all sides while she defiantly no-sells, looking like the hugest badass in the world. Bull completely shatters one over Aja’s head in response, then wipes out the REF when he tries to stop it. She continues the assault, but Aja bowls her over with the body attack and roars in defiance- crazy Headbutt Spam puts Bull down for two and she has to grab the rope. Now we get ANOTHER brawl to the floor, this one demolishing the ringside area and going into the stands, and Aja barely makes it back into the ring in time. Lariat & suplex both get two for Bull- Bison stopping the count. Grizzly hits a super-impressive powerslam on Aja for two (like, Davey-Boy style minus the run! Aja’s HUGE!), then another for the same. Aja kicks her away and tags out, leading to Bison Chops & a Saito suplex for two.

Aja beats Grizzly’s ass again and hits a Super Powerslam for two! Grizzly is dead, so Bull & Bison brawl until Bull just completely waylays her with kicks and avoids hairpulling attempts, then she brains Aja with a chair… but back in the ring, Bison stuns Grizzly with a Bison Chop, then hits a Bridging German Suplex… for the three (25:46)! Caught ’em napping! Bull & Aja can’t avoid continuing the fight while their subordinates lay dead on the mat, and the ring girls have to pry them apart like a pair of pitbulls. Bull cuts a promo dissing Aja, who just roars at her savagely

Okay, now THIS was a brawl. Multiple instances of hairpulling and biting, people grabbing distinctive “trademark” weapons (oil can, kendo stick, billy club), and a crazy back & forth. I got the impression that even though this centered on the Bull/Aja feud, this was meant to elevate their partners, as Bison in particular got a LOT of focus trying to beat some respect into Bull, and Grizzly was a bloodied Ricky Morton. Bull no-selling the kendo sticks is an all-time visual for looking awesome, and those shots she threw at Aja looked BRUTAL. Smart ending, too, as Aja crushes the fight out of Grizzly, but Bull gets distracted fighting her while Bison sneaks in for the pin in the ring. Also, great points for going for 25 minutes yet still having it feel short because it was just so wild & chaotic, while never settling into one particular “segment” for too long- not a resthold in sight, nor did they fight outside too long or do a “weapons bit” for too long.

Rating: **** (just a completely wild, chaotic brawl that would have gone over INSANELY well in the West at the time. Maximum stiffness and super-violent without defaulting to just gore)