Who is the World champion? What will happen when Zumhofe and Al-Kaissie collide? And who’s the new guy? Grab your favorite examination tool, and let’s find out!

While Nelson questions who the World champion is, he gives a fan from Maine a Ninja Star Wars game for being the “fan of the week.” Somewhere both Eric Bischoff and Sonny Onoo are smiling.

Summary: Showcase match for the champs.

Summary: Showcase match for Blackwell who is tagging with a new wrestler named Avalanche at both the wrestling arenas and the pizzerias. I’m sure Leone could point them to Mama Leone’s restaurant for some good eats.

Match 3: The Avalanche versus Joe Pantera

Summary: Showcase match for a very green Paul Neu. Afterward, his opponent claimed he was broken.

Summary: More angle than match as the Sheik and his army intend to turn Zumhofe into mincemeat.

After the match, Al-Kaissie and Zhukov double-team Zumhofe until Al-Kaissie grabs the boombox and DESTROYS it over Zumhofe’s head. How dastardly! They lay waste to Zumhofe, and Al-Kaissie crowns Zumhofe with the boombox again. As Zhukov headbutts a BUSTED OPEN Zumhofe, Al-Kaissie demolishes the boombox. The Midnight Rockers scramble to the ring to halt the chicanery, and armed security assist the injured Zumhofe from the ring. I’m sure Zumhofe’s accustomed to police escorts. 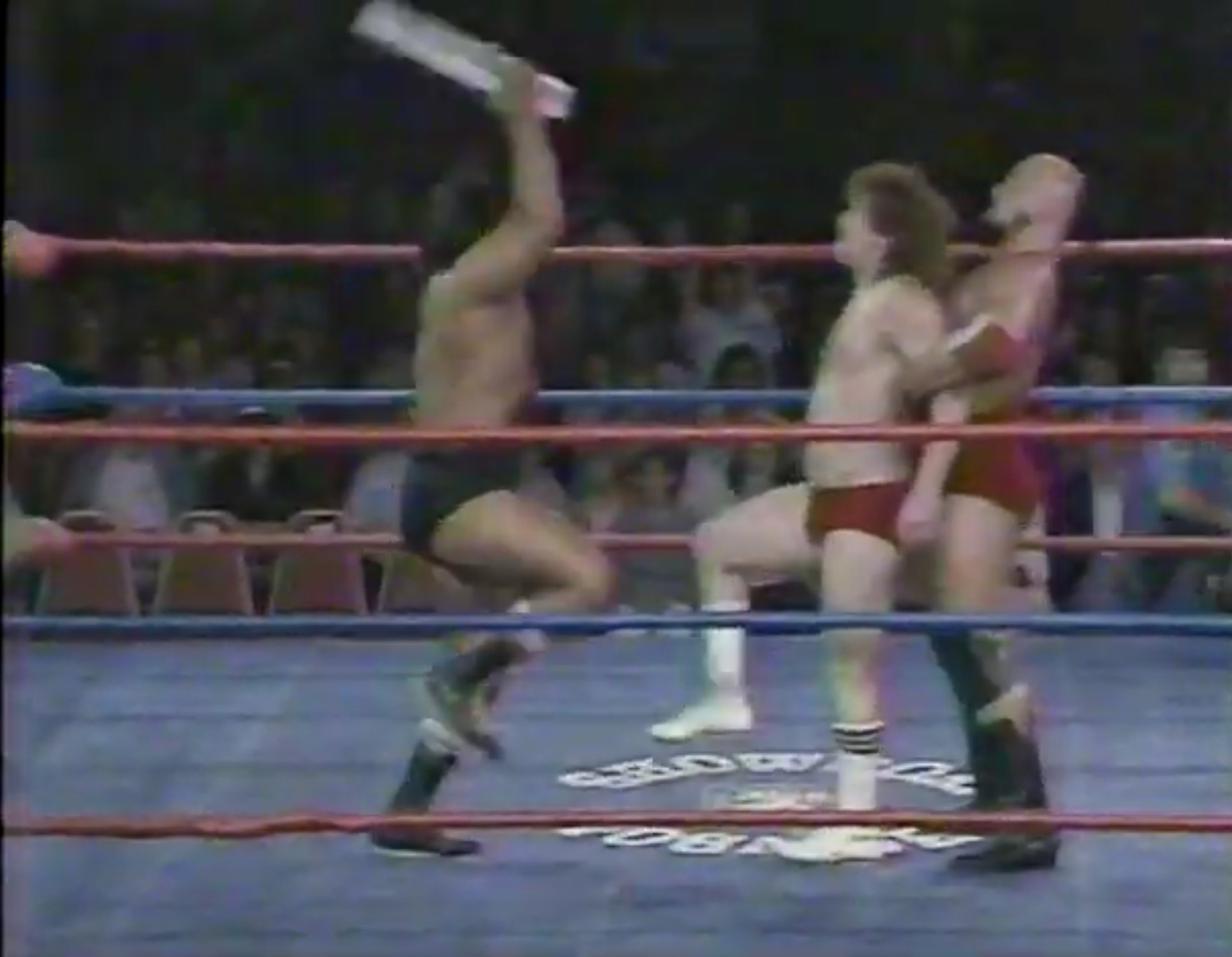 For the main event, let’s return to SuperClash II for the World title match joined in progress.

Summary: Finally! After enduring a bloody 60-minute battle in Vegas and a screwjob in St. Paul, Hennig defeats Bockwinkel, but with a punch? How can that be?

According to multiple sources, Hennig was offered an opportunity to join the WWF, took a week to mull it over, but decided to remain with the AWA. Hence, the title change stood.

Conclusion:  Timing is everything. Had Hennig accepted the offer to stay with the AWA prior to SuperClash II, his victory over Bockwinkel could have been momentous. Instead, it looked like Verne was up to his old tricks again but stuck with Hennig to swerve us.

Zumhofe’s destruction by the Sheik’s army would have meant more if Zumhofe had decimated Al-Kaissie at Super Clash II. On the other hand, it was good to gain context for their match.

Comments? Suggestions? Send them to me at [email protected]m and follow me on Twitter (@rockstargary202). Also, please check out all of my reflections at rockstargary.com including the Monday Night War and Herb Abrams’ UWF!