And we’re back after two weeks to watch the conclusion of the Match Of The Year Orndorff vs. Williams! That Herb tells us couldn’t be viewed in it’s entirety last time due to “time restraints.” I believe him. Also some unreleased matches because apparently cutting so many Honky Tonk Man, Greg Valentine & Rick Rude segments out of the Penta Hotel tapings mean we have to dip into the B-sides this week.

Get ready for first gear, it’s David Sammartino. There’s a giant bit of silence from the commentators to begin and when it does start talking, it’s talking about the Zybysko match that never happened. A reminder this promotion was only voted #4 Worst Company in the WON awards. More silence from the commentary (and fans) while David does the same two or three technical segments he does every match that wouldn’t get a reaction if he yelled F--- THE QUEEN while he applied them. Even Bruno starts wondering what David’s doing because he keeps switching body parts for the sake of it. Even Louie can’t be arsed with this, eventually tapping out to a Figure Four Leg Lock. This would be Louie’s last televised appearance for UWF as Herb would take Louie’s visit to Titan Sports Office last week as a betrayal and would decide to not pay him.

Completely unrelated but this letter was sent to Meltzer this week:

This morning I received a stop payment of the check for the money owed me from the UWF’s New York tour. I decided to write this letter to let everyone who believes in Herb Abrams know what he really is. Before I do, I’d like everyone to know I’ve already contacted by lawyer and the most severe litigation possible is forthcoming and I’ve also filed a formal complaint with the New York State Athletic Commission. In addition, I’ve contacted everyone who works for Abrams and have informed them of what, in my opinion, is both unprofessional and inconsiderate. When I first met Herb Abrams, he was a little man with a big dream. His dream was the UWF. I remember watching him run around out of control, barking out orders at everyone in sight. Every other word was a dirty one. His overall bad-mouthing of people and rudeness was embarrassing to everyone who worked for him. His dreams of started a Los Angeles-based promotion quickly faded, and he decided to pack up and try to compete with the largest promotion in the world by moving to New York and go head-up with Vince McMahon. Everyone heard Herb constantly badmouth the WWF and talk about how McMahon was shaking in his boots at even the thought of Herb running shows in New York. Well, I’m quite sure the only shaking McMahon did regarding Herb was from laughing hysterically at what a flop he turned into. I’ve worked for McMahon many times and his checks are ‘always good. In Herb’s everlasting quest to save money on what he deemed as unimportant, he sent 11 boxers of souvenirs with me and some others on the plane and checked it as baggage. I also helped pack the boxes, transport the boxes and stored the boxes in my living room. In doing so, I never received any extra money or even so much as a thank you. Our plane tickets had other people’s names on them and we were told by Mrs. Abrams to let her check in to all our flights. Then after a delayed five-hour flight, I was asked to help the ring crew put up the turnbuckles. This, I might add, took place at 4:30 a.m. Herb made his ring crew work until 6 a.m. and then got mad because they weren’t ready for work the next morning at 9 a.m. Abrams likes to think he’s one of the boys. But the boys think of him as the cosmetic promoter, because what was claimed to have been a first-class up-and-coming promotion was nothing more than a low class, mickey mouse promotion. It’s quite obvious if bounced checks continue, it’s only a matter of time that it’ll come back to haunt Herb. Even if his attitude changed, his constant cursing of security guards and fans would turn UWF fans into non-supporters, just like me. When Herb sits at home laughing because he thinks he got one over on me by stopping payment on my check, I’m laughing twice as hard, just like all the boys would laugh beyond his back and him trying to play promoter. Herb bought wrestlers airline tickets, hotel rooms, limos and even dinner. It’s too bad he couldn’t buy the one thing that would have counted the most. Respect.

DM: The person who wrote this letter did sign his name, but I took it off so as not to have it held against him in future wrestling endeavours. A photostat of the check with the stop payment is on file here.

Riki’s also long gone by this point but that doesn’t stop Ivan from letting him get some offence in before smashing him on the guard-rail outside. Ivan very slowly takes Riki out before finishing with a Cobra Clutch. There’s a reason these matches weren’t aired originally.

OK here we go, resuming with Dr. Death bleeding and the match already technically being over. Williams head-butts Orndorff until Paul is also bleeding with both men swinging at one another on the outside. Williams flies off the top with an axe handle as the camera shows the amount of people leaving to beat the traffic. Oof. The ref accidentally gets taken out as both men continue to go at it, with the ref ending it a second time, causing a load of wrestlers to run out to try and stop them but having no effect because it’s f------ Williams & Orndorff. It’s officially announced as a Double DQ as Williams charges Paula from across the ring as the wrestlers finally get Mr. Wonderful to safety by dragging him to the back. This was done well, however the crowd were in no mood after sixteen hours and Herb did himself no favours pulling a Solomon and splitting this match in half while hyping a Double DQ as The Match Of The Year.

This is also King Parsons’ last appearance so I guess that DeBeers’ feud is finished. I’m glad he got a fluke victory to make up for all those times DeBeers beat up his relative. Starr is a fridge-shaped dude who spends the majority of the match pasting Parsons around the ringside area. DeBeers is shown watching the match and points at Parsons, who finishes with a series of jabs. I’m assuming him and DeBeers went at it afterwards and they just removed it.

To continue the theme for this week, The Viking was done with the company in December so of course they’re airing a squash match. Viking turns The Intern inside-out with a clothesline before finishing with a big old slam. Match was nothing but at least Viking smashed a fan’s chair before the match.

Someone asks how the wrestlers from the seventies compared to today’s wrestlers and of course Boring Bruno puts over both sets of tremendous, tremendous wrestlers. Yeah they had money issues in the 70s too.

He’s more of a historical footnote so let’s see what he’s got against the fat lump cosplaying as his own Dad. Barry plays heel and takes a breather outside when he sees how agile Jay is. Yeah that’s what’s associated with Strongbow. Barry takes him down with a headlock as the crowd makes vaguely racist noises to show support. O pounds on Jay while shaking like a shitting dog. Crowd stop supporting Jay after the second heat segment, as does the commentary team who stop talking for long periods of time presumably because this was going to be trimmed to just the good bits. I love Herb. By the time Jay Revs Up His Injun, the crowd are having none of it. Jay locks in a sleeper hold and the bell rings because it’s a time limit draw. Woof. Barry O did nothing to stand out but he removed Strongbow from UWF so there’s that.

Overall: Never mind trusting Herb to blow off big matches correctly, this episode proved he couldn’t even do basic TV right. A whole episode of lame matches featuring already-left talent, unedited commentary and crowds that were past caring.

The highlight of the show was an advert for the February 15th return tapings at Penta Hotel and they advertise Williams, Orndorff, Orton, Blair, Muraco, Jack, Beach, Ray….and Dr. X. 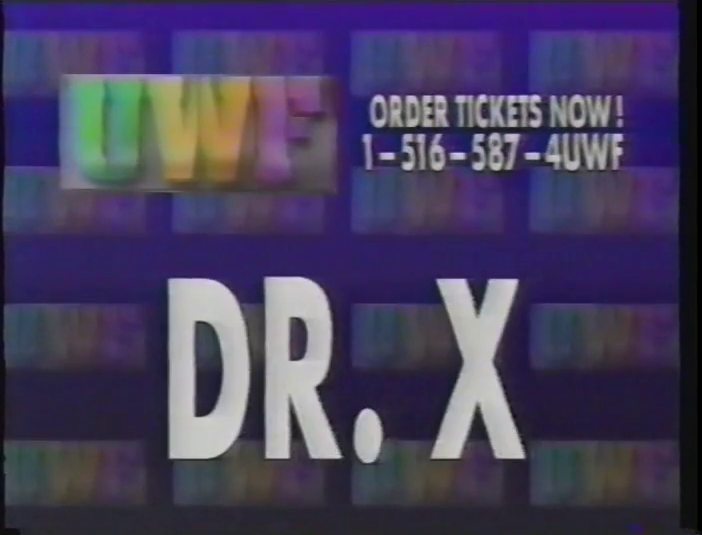 And a quick look ahead of the results reveals that Dr. X no-showed.

My only regret is that there’s only 44 episodes of this show.