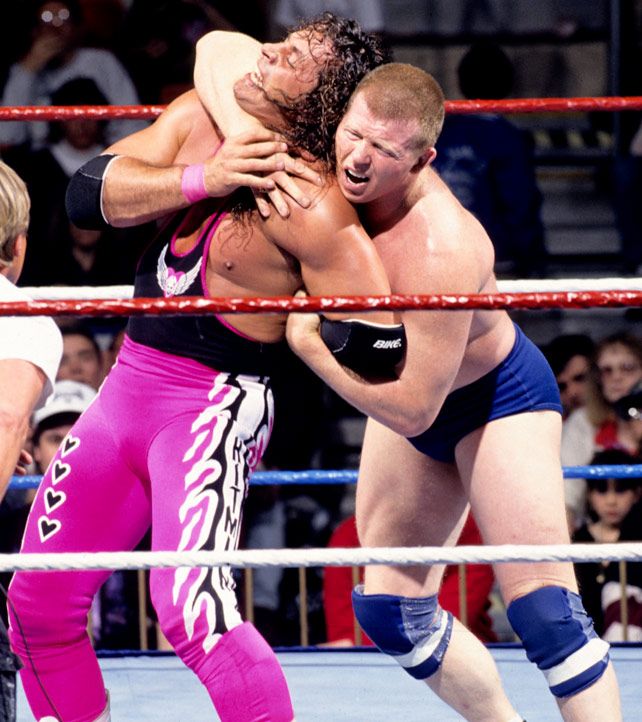 Owen & Bulldog immediately do one of those insane sequences at 120 mph that they can do in their sleep but should be impossible for guys their size, then Owen gets launched and Backlund gets tossed around as well. Bret comes in to kick Owen’s ass as the fake crowd heat is particularly noticeable (some fans are into it but it sounds like a riot is going on). Bret throws his incredible punches and headbutts, then an inverted atomic drop, clothesline, whip to the corner, headbutt & mat slam, but Owen rakes the face to escape the backbreaker. Bob comes in and eats a Sharpshooter immediately, but Owen breaks it up and we’re back from break with the heels in charge, cheating to work Bret’s knee. Bret gets an inside cradle to stop a figure-four, but Owen kicks out and clobbers him to stuff the comeback. We get the classic “false tag” spot to tease the fans, and Owen finally gets that figure-four- Bret stays in it for ages, sometimes reversing it, and there’s a fun bit where Bob interferes to stall him, then BULLDOG comes in to break it up in some classic “Well if YOU’RE gonna do it…”.

Bob prevents another tag, but Bret dodges a double-team to put both guys out, and Bulldog’s in with clotheslines and a press slam to Owen! Owen takes the “Bret Bump” in the corner and Bob’s in, but Bulldog runs Owen into him and hits an inside cradle for two. Bob interferes again and so Bret drags him outside for the Sharpshooter on the floor, and Owen hops up from a corner whip and lands right into Powerslam position- the Running Powerslam finishes him while Bob’s on the outside (13:04)! Bret & Bulldog win! And Bret, in some beautiful payback from Survivor Series, will NOT relinquish the hold, torturing Bob to death on the floor while Garea, Goulet and the referee brigade all desperately try to pry him off. God I love vicious, vengeance-seeking Bret. I liked that he was edgier than other babyfaces, and would throw some serious payback.

REALLY hot match to start, with everyone blitzing at top speed, but they settled down to a long heat segment on Bret. That went on FOREVER, but was at least competently wrestled, but then the babyfaces outsmart them a couple of times and you can’t ask for a better “hot tag” guy than Davey-Boy, who just plasters Owen. And we even got a clean win! This was a good indication that Owen’s singles run was fading, but he’d be made Tag Champ very quickly so it didn’t matter.

The Tugboat is dead! Long live the Typhoon!

EARTHQUAKE & THE NASTY BOYS (Brian Knobs & Jerry Sags) (w/ Jimmy Hart) vs. TUGBOAT & THE BUSHWHACKERS (Luke & Butch):
(WWF Superstars, June 15th 1991)
* Earthquake and the WWF Tag Team Champions are thrown into a big six-man against Quake’s rival Tugboat (the two were enemies going back to the previous year, when Tugger was the new “Hogan Buddy” and Quake was the Monster Heel the Hulkster had to overcome in a feud lasting for ages), and the Bushwhackers, who were by this point utter jokes in the pecking order. Tugboat himself was tumbling down the card as well, so this looks like trouble for the babyfaces. Quake is now in his later gear, the blue & black look, which is much better than his baby-blue onesie.

Knobs attacks Luke with right hands, but whips him to the corner and eats a clothesline on the follow-through. Tugboat is doing his “BEEEEEEEEEEEE!” taunt so conveniently misses a tag, so Luke brings Butch in instead. He gets double-teamed by the Nasties, but kneelifts Sags and AGAIN Tugboat misses the tag. Luke comes in again, but takes an eyerake- he avoids Knobs on the charge and bites him, and finally just tags in Tugboat while he’s still building his SmackDown! meter outside. He and Earthquake prepare for a FAT MAN STAND-OFF, but Tugger just tags out with no contact- the crowd now realizes something’s up as Quake splats Luke. Butch saves him after a Nasty double-elbow, but Earthquake adds his powerslam and it’s looking dire. Butch stomps him to break another count, then lights up the Nasties on the apron! And he grabs at Jimmy Hart when he hits the ring… but then Tugboat ATTACKS BUTCH! Butch gets tossed over the ropes, and Tugboat adds his future “Tidal Wave” splash to a dead Luke, Earthquake making it academic with the Earthquake Vertical Splash at (4:25) while Tugboat smirks on the floor.

More of an angle than a match, as Tugboat avoids the tag and then turns on his buddies, the Bushwhackers getting completely destroyed in the end. This is the end of Tugboat, as he turns heel and becomes the evil Typhoon, forming the “Natural Disasters” from this point on. Though by January they’d be babyfaces for a year, then split up and he’d be made a JTTS guy as Quake came and went.

Rating: * (just a bunch of brawling and slamming each other around, but okay enough for what it was)

I was looking for “Barry Windham WWF” pics and found this. Dig the Chachi leg-bandana!

BRADSHAW vs. BARRY WINDHAM (w/ Jim Cornette):
(March 23rd, 1998)
* The New Blackjacks EXPLODE! Windham has become jealous of his “Future Superstar” partner (by this point the WWF had decided Bradshaw was gonna be a megastar and had to constantly be protected), and now it’s time to put the new guy over. Shockingly, Bradshaw is seen in the clips hitting an All Japan-esque Release Tiger Suplex on some poor jobber, which is wild. The NWA faction-aligned Barry’s back to blond hair already, but both are in black trunks and chaps. The Rock ‘n’ Roll Express come down to ringside to watch (in WWF Attitude t-shirts!), but the crowd couldn’t give the slightest of fucks.

Bradshaw hits a big boot immediately and whips Barry with his chaps, then chases him outside for an ass-kicking. Barry goes into the steps and gets kicked in the face, but manages to trip Bradshaw up with HIS chaps, but Bradshaw just starts no-selling and beats the shit out of him, throwing clotheslines in the corner. The Lariat is ducked and Barry hits a DDT to come back, but Cornette gets into it with the Express, leading to Barry turning around and eating the most devastating finisher in history- the Distraction Roll-Up, for the finish at (3:05). LOL the big breakup match is only three minutes long- thanks, Russo! Barry jumps Bradshaw anyhow, and the New Midnight Express join in the beatdown. Bombastic Bob & Bodacious Bart- jesus.

Rating: *1/2 (mostly just Bradshaw no-selling and whupping some ass, but what little we got was good enough)

One of my favorite things in wrestling: The complete doofus jobber who nonetheless has a gimmick.

FIRE & ICE (Scott Norton & Ice Train) vs. MAXX MUSCLE & THE GAMBLER:
(WCW Saturday Night, 1996 sometime)
* Oh man, haha. Fire & Ice is brand new at this point, and their opponents are former DDP goon Maxx and jobber The Gambler. Fire & Ice set off my OCD by wearing blue (Norton, aka “Fire”) and red (Train, aka “Ice”). No wonder the team didn’t last! Maxx is roided but actually wearing a workout shirt, weight belt and blue striped shorts (like, his only benefit is his mass and you put a SHIRT on him?), while the Gambler looks like a guy who’s legally not allowed within 200 meters of a school- balding, hairy chest, black trunks, leather jacket and “roll the dice” pantomiming.

Gambler & Ice Train start, Gambler going to the eyes but getting shoulderblocked out of the ring. Maxx tries with Norton, stalling him with a punch but missing a clothesline and also getting shoulderblocked down. Norton tags Train and they hit a Powerbomb/Jumping Splash combo for the easy pin (1:42). Barely even a match! Like Maxx Muscle shouldn’t be doing that much but he’s taller and broader than Norton and he goes down in two hits like he’s in Disorderly Conduct!

Rating: DUD (more or less two shoulderblocks and a finisher)

Man, who would have predicted that wrestling fans would eventually look more favorably on TIGER ALI SINGH than Val Venis?

VAL VENIS vs. TIGER ALI SINGH:
(WWF Shotgun Saturday Night, Jan. 16th 1999)
* Oh man- the Tiger Ali push. They’ve already given up on him as a babyface, making him an Indian version of Ted DiBiase. Val, of course, was tremendously over in 1999, mostly thanks to double-entendre promos like this one, where he indicates he’s like the WWF, because he’s got “shots heard all around the world!” with that stupid gravelly voice he used. Yeah, his stuff doesn’t really hold up at all- all pun and no delivery. The ladies love him, though. Singh is wearing a ridiculous jobber singlet, black & red. BRUCE PRICHARD of all people is on commentary with Kevin Kelly.

Singh does some basic 1980s heel stuff before Val bowls him over with clotheslines and a Russian legsweep. Val does his hip-swivel over Singh, but gets whipped into the corner and DDT’d. Singh poses in the corner instead of going for the pin, and puts his knee on Val for an obvious kickout. He gets a sleeper, but Val backdrops out only to miss an elbow, then Singh hits a spinning neckbreaker & suplex for two. He charges into Val’s foot in the corner and gets beaten up. Back body drop gets two and Singh goes to the eyes, but runs into a powerslam and the Money Shot (flying splash) finishes him at (5:05), Val winning handily. The match was pretty weird for 1999- like right out of the 1980s, with Singh doing all the most generic stuff from that decade and even controlling the match until Val hit easy comebacks until winning. Not actively bad, surprisingly (especially as Singh’s reputation is TERRIBLE)- just basic.

VAL VENIS vs. TIGER ALI SINGH:
(WWF Shotgun Saturday Night, March 27th 1999)
* WEIRD- another one of those “they wrestle the same match in quick succession on the D-show” things. Val starts off with his promo but Singh attacks from behind with the Indian flag.

Val, who should be half-dead, takes a bunch of punches and kicks- he tries a comeback but gets stomped again when he misses a charge. Singh chokes him out, but turns around to gloat and gets clotheslined down- Val hits a butterfly suplex for two, then Singh fails to sucker him and eats a spinebuster (not really landing right). He manages a sleeper, but Val elbows out and hits a ton of precise strikes- Russian legsweep and the hip-swivel ends with Val getting eyepoked, but he manages the powerslam & Money Shot at (3:14). Haha, Val got beaten down with a weapon before the match, but beats him even FASTER?