This week I’m looking at the Ayatollah of Rock ‘n’ Rolla, none other than Chris Jericho, a guy who I’ve always thought his character was far better than his ability and generally was a guy considered in the highly-held league of the Benoits and Malenkos and Guerreros, but was a big step below and pretty clunky and awkward. Let’s see how he is his international exploits. 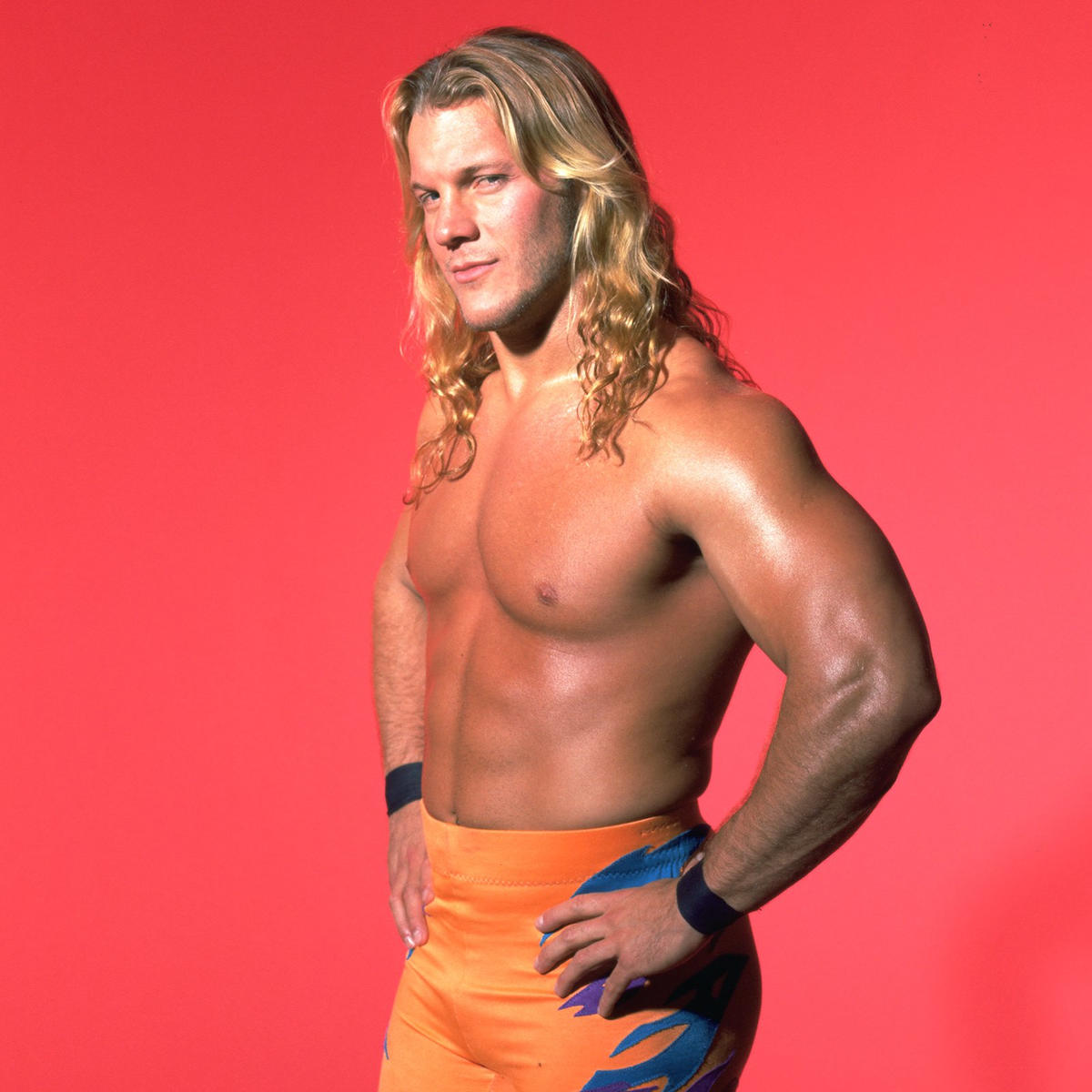 El Samurai featured pretty heavily in Howard Brody’s Ring Warriors show, with Sir Oliver Humperdink presumably making up stories about his possibly origin just to amuse himself. Here’s he’s in a blue outfit I’m not as familiar with. Jericho’s in orange, like above, and defaulting to the heel role. Lots of reversals off a wristlock until Jericho takes the old rear chinlock with the knee behind the neck, which nobody seems to have done in years. Lots of exchanged fishhooking too before Jericho gets the electric chair drop and delayed suplex out of nowhere, but only a simple “Oh, yeah!” rather than the “Yeah, baby!” pin. Jericho winds up in a surfboard but mule kicks out of it and just screams as much as he can on striking moves like a clothesline. Springboard splash from the outside for two. Side suplex, which really doesn’t suit him as a move to do, followed by a side backbreaker. Samurai transitions into a Regal Stretch, with Jericho’s next challenge to be as many goofy facial expressions as he can. Jericho Alabama slams Sams out of the corner and goes to the Lion Tamer, but Samurai gets the ropes. Spinning heel kick and a dropkick send him outside, with Jericho following with the springboard cross body to the outside. Back in, Jericho gets a splash from the top for two. Nothing too special to it, hence why he probably didn’t use it often. He tries a grounded choke sleeper while working on his Iron Mike Sharpe impression further, but Samurai gets the rope again. This leads to a terrible bit where Jericho fails to hit a springboard move like Tom Zenk missing Brian Lee in 1990. He almost gets counted out and just returns on nineteen. Samurai hits a pair of reverse DDTs and a powerbomb for a near fall. A Frankensteiner from the top leads to and implausible rolling back and forth series of pinfall attempts. Samurai misses a splash and Jericho goes for La Majistral, but Samurai doesn’t get rolled all the way and almost wins. Then his tornado DDT is reversed into a northern lights suplex for two. Jericho misses the Lionsault and both guys go to the top again and drop down to the outside after losing their balance. Then back up, once more, for the match winning Frankensteiner for Jericho. That’s part of my problem with Jericho and his ilk, far too many near falls and big moves that go nowhere. Compare with Bret Hart, who would make you think the match was over, but it wasn’t, then it was. Good enough to get the point, though. ICHIBAN!

So, Jericho gets a shot as a potential Jushin Liger opponent and it does on the vine. You can tell that he doesn’t have the body language for it from the start, with a muscle pose to no response. Kanemoto has an amusing unimpressed look on his face, not putting any of the gestures over and taking the first move. Jericho gets a back suplex, but Kanemoto won’t initially work with him on going up for a vertical suplex, which would actually make sense that early in a match. Jericho gets a sloppy kick to the back of the neck, with no impact sound on it, so Kanemoto shows him how those are done properly, twice. Jericho’s running stomp is a bizarre move as far a build and non-result. A dropkick to the knee sets up a leg grapevine, which Koji kicks out of. Jericho gets a really awful enzuigiri and his springboard splash, with no real effort to vary his regular moveset or emulate or subvert Liger’s. He goes for the springboard forearm shot to the outside when Kanemoto falls out, but slips and falls on his face in an embarrassing move. Surprisingly, Kanemoto waits for him to get back up and dropkick him rather than flipping the script and putting the boots to him. Jericho does get a pretty nice dropkick to the outside, then a double bird that gets no reaction. Suplex attempt back in, which Koji reverses to the outside and gets a springboard flip after. Jericho flips over a suplex back in, but misses the Lionsault before duelling dropkicks miss. Kanemoto reverse a top rope Frankensteiner into a powerbomb for two. Moonsault pretty much to the knees gets two, but Kanemoto pulls him up, then also seems to release the tiger suplex early as well. Jericho gets a clothesline, but Kanemoto dumps him to the outside off a superplex attempt. Back in, Jericho gets a butterfly superplex for two, pulls him up, then wins with the tiger suplex himself. Not the worst match I’ve ever seen, but a total flop for Jericho, who I believe blamed the bad costume for affecting his performance. BUST! 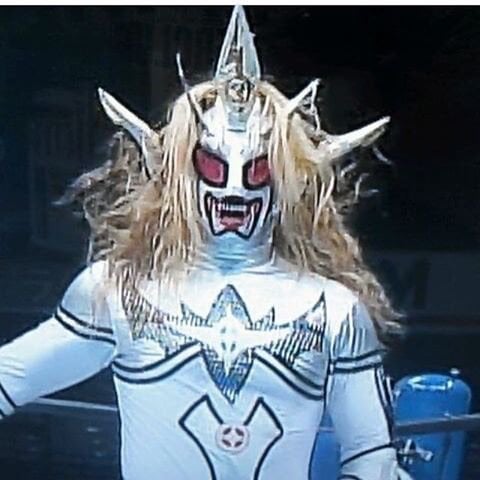 A year ahead now, with Jericho totally reinvented as the funniest heel in wrestling in WCW, but already on the outs with WCW almost eleven months before joining the WWF given that his departure to better climes was so transparent. Old Seiji Sakaguchi as the authority figure dwarfing the wrestlers always looks funny to me. Eddie may as well not be wearing the mask as his scowl just cuts through it. Jericho and his mutton chops start with Takaiwa. Slap on the ropes sets the tone. It gets cleaner, but Jericho employs the Roddy Piper eye poke and brings in Tiger with a senton. Clotheslines are exchanged between Jericho and Takaiwa and Otani comes in with a springboard kneedrop, followed with some face washers. Jericho rolls into a snap suplex to get a tag to Eddie, who gets a rare Bret Hart-like legdrop out of his usual face burn. Jericho tries wandering in while the faces have the advantage, but gets shown the door. He then gets reentry with a tag and springboard splash but gets caught in a camel clutch/seated dropkick combo. Otani’s glee at hitting the move is such fun. He really won me over with his performance against Eddie at Starrcade ’95, just letting his personality shine through in the match of the night. Eddie comes back in and gets him into a crossface chickenwing. Takaiwa breaks that and helps with a wishbone split, but Tiger regains the advantage and brings in Jericho, who gets a senton but gets caught mid-leapfrog with a powerslam. Takaiwa sets up for the powerbomb, but Jericho flips through it and get the triple powerbomb, punctuating the last one with a “F--- you!”. The heels stomp away, but Jericho’s kicks and stomps never look like they hurt. Eddie takes one the task of trying to muscle up the larger Takaiwa with a pumphandle slam, seemingly switching to a backbreaker mid-move. Gory special for a submission attempt, then as the base for a double team flying clothesline, which sounds good in theory but lacks in execution because of nowhere to drop or role. Jericho gets the double arm suplex into a backbreaker, then holds Takaiwa in the corner for a dropkick to the back by Tiger. Assisted abdominal stretch, way too late into the match, as a closeup of Eddie’s face shows just how much leaner he was from his slightly pudgy days in the nineties. Getting ripped and growing the moustache out into a goatee when he went heel did wonders for him. A quasi-decapitation movie with Jericho holding Takaiwa in the backbreaker while Guerrero flips in with a senton for two. Frankensteiner gets the same. Takaiwa gets a chance powerslam and holds Tiger up in the powerbomb for a flying dropkick down from Otani, then follows with another three powerbombs in an impressive show of strength. Lariat for two. Guerrero breaks his flow with a dropkick to the knee, then one while he’s down to the face, but both guys make the tag and Otani meets Jericho on the way in with a fantastic springboard dropkick. Jericho avoids a spinning heel kick and gets a clothesline and Lionsault, but Otani folds him up with a German suplex for two. He tries a huracanrana and gets caught in the Lion Tamer until a break. Superplex sets up Eddie’s frog splash, followed by Jericho’s single foot pin for two. Eddie gets splash mountain for two. Try number two, but Otani flips through and gets a spinning powerbomb for two himself. Eddie gets the brainbuster, then looks like he’s going for the Three Amigos, but stops at two. However, Otani pulls out one more springboard dropkick and wins for his team with the dragon suplex. Much better match, with Otani being the best thing about it while the heels did their thing and Takaiwa timed his comebacks well. ICHIBAN!

Back next time with a switch back to the heels of the WWF, but I’ve also got it in mind that I may take a look at All and Big Japan respectively too.