More of the nWo in New Japan, and remember that as last week proved I can be a little creative/loose (delete as applicable) with what I include, so watch out for some interesting selections.

A bit of pre-nWo action for the Stinger in what I understand is an infamously bad match. Palmore is a kickboxer who has to be under six feet tall and looks like California journeyman Buddha Khan. Sting has what looks like black and yellow Halloween makeup one as well as hair that’s growing out like a teddy boy quiff. Palmore throws some kicks and punches while Sting tries to sweep the leg, although nothing fully connecting. There’s actually even a look from Palmore that any of us who did karate as a kid will recognise as meaning “I’m going to throw this, you ready? It won’t hurt!”. Sting’s pretty much backing on the ropes and keeping his hands up until he can get a hip toss and an attempt at a sleeper. Palmore gets some good shots in and a scissor kick of all things. Sting gets what could generously be called an attempt at a German suplex, which is more two guys falling over while one hugs the other’s waist. That scissor kick again, which Sting sells like he’s been twelve rounds with Mike Tyson. He catches another one and turns it into the Scorpion Deathlock. Painful, but at least it was over quickly. BUST! 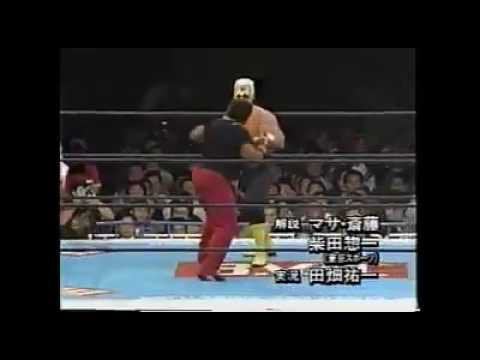 Keiji Mutoh and the Steiner Brothers vs. Masahiro Chono and the Outsiders (Osaka, Japan, May 3rd, 1997)

I was really hoping that the match with a pre-Diamond Studd Scott Hall and Punisher Dice Morgan was on New Japan world, but it’s not. A lot of familiar guys here and one of the later appearances of Scott Steiner with no facial hair and a ponytail. The Japanese guys start as Eric Bischoff makes a cameo on commentary to discuss the nWo recruitment drive. Chono gets the early advantage with a kick and a suplex on the ramp, but stops to pose and gets bulldogged on it, setting up the sprinting clothesline, which Muta does a little gambol after and some Rick Steiner barking. The Scotts take over in the ring, with Hall getting his chokeslam. Scott gets a pumphandle slam to little reaction, as the silence of the arena at times really shows off his “AH?!” tic. He’s trying to work to an American audience without understanding Japanese sensibilities. Rick in with the Steinerline, then goes for the bulldog and gets caught in the SOS. The faces clear the ring briefly and Mutoh joins in the dog pose with Rick. Big Lazy finally joins with elbows and knees. Snake Eyes on Rick, which Steiner sells really well like a knockout move. Masa Saito is having an unintentionally funny conversation with Easy E where he’s guessing Nash’s stats and way under on height and weight.  The faces manage to trap Hall in the ring while that’s happening awkwardly before Scott Steiner gets caught in the heel corner. The flow of the match has taken a bit of a hit, as they seemed to take too long in the first ten minutes setting stuff up and then rush through the heel heat segment. Scott comes back with a butterfly bomb on Chono but gets necked on the top rope by Nash when he goes up for a superplex. He comes in with a side suplex for two. Rick keeps saving his brother from pin and submission attempts. The Scotts double clothesline another to allow a lukewarm tag to Rick. He combines with Scott for the elevated bulldog, but walks into a Nash boot. He gets a chance German suplex on Chono, but gets caught in the Outsiders Edge, which Chono breaks up. Nash slips in and hits the Jackknife behind the ref’s back for Hall to get the win. It was alright, didn’t really have the heat or pace it needed, but wasn’t terribly bad. ICHIBAN! 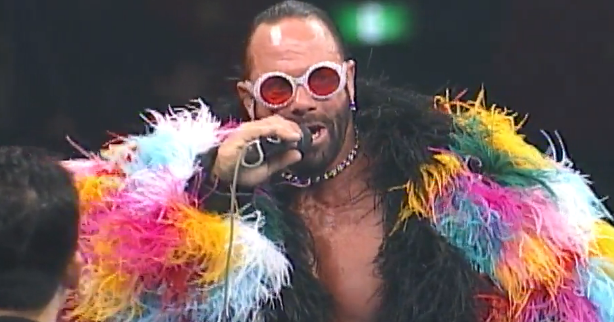 And some post-nWo action for Mach, who was in his pimp gimmick days by this point, substituting for someone I believe. Even though it’s his nadir, I think it would be a period worthy of reappraisal because at least he got his hair looking better and he was getting a bit mad (or madder) in his promos. Steiner lets him get a bunch of stuff out of his system like threatening the ring announcer and picking fights with Saito and the rest of the commentary team. He’s absolutely juiced to the gills too. After a brief tussle five minutes in with Steiner he then vents his spleen against someone in the crowd, then sneaks in a punch. They go to some vaguely shootish stuff on the mat before Randy rolls out. Back in with a clothesline, then some weird thing that looked like Steiner going for an elbow but flying off. Steiner gets his own Steinerline for two. Savage cheats with a choke and a smother before striking with an elbow. Just totally counter-intuitive to see him so sluggish when his reputation was built on being quick as a cat, constant movement and killer instinct. Steiner gets a trio of ropy German suplexes, then tries to finish with the flying bulldog, which gets two. Savage goes low to buy some time. To the outside, his highspot is a pair of elbows on the ramp. Bear in mind, this is a guy who would’ve dropped six double axehandles, half on the inside and half on the outside, plus would’ve tried the big elbow even from a distance. He brings a chair back in to bash Steiner with and finally does ascend the ropes for the elbow on the inside, but it only gets two. This displeases him, so he throws the ref out (you knew it was going to happen) and slaps him around. Steiner uses that to get a DDT on the chair, then goes for the flying bulldog but loses his balance and drops to the floor. Macho catches him coming back in, but bulldog attempt number three gets the win. Saito gets to get a shot in two while Steiner holds him on the outside. Kinda depressing and kinda fascinating to see the dilapidated Macho Man trying to squeeze so much out of next to nothing. Maybe I will go and look at his stuff in WCW with Gorgeous George… or maybe not. BUST!

Melting it down: Easier to say that something can be both interesting and bad at the same time, as was the case here. Back next week when I break the walls down!