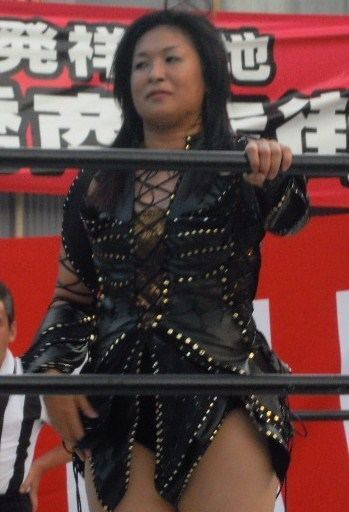 Hey, look! I combined my two columns into one! Mostly because I mixed up my schedule a few weeks back and thus this week had a pretty short Joshi Spotlight… AND I had a long review here for my Dream Matches column that I had trouble placing. And I realized I could kill two birds with one stone! It technically counts as a Joshi thing (it was “Joshimania” after all!), but is also a Dream Match!

KING OF TRIOS TOURNAMENT:
MANAMI TOYOTA, MIKE QUACKENBUCK & JIGSAW vs. THE AMAZING RED & LOS MAXIMOS (Joel & Jose Maximo):
(CHIKARA, 2011)
* So this is from CHIKARA’s 2011 “King of Trios” tournament, which I think also crossed over with their “Joshimania” thing. I know someone who came to see her there (she was dragged there by her brother), and says Manami was just the BEST, and seemed so happy that all these people came to see her. Here she’s teaming with Mike Quackenbush, who I only know from LK2000’s old “List of Wrestling Moves”, which made me laugh because Quack had like every single “hard-hitting” move in wrestling in his repertoire, as if he was just a huge weeb who wanted to copy everything from puro. I mean, that’s the impression I got… I’d have done the same thing if I was a young wrestler. They’re teaming up with some guy named Jigsaw (never heard of him- he was “Rubix” in TNA according to Wikipedia) against a group of guys who got a lot of attention back in the day- high-flying tiny boy Red and the Maximos, who were well-respected but eventually kinda got exposed as overly-choreographed guys. Which I think makes them highly influential towards the modern style.

So Quack is in goofy green ultra-baggy pants with lightning bolts on them (and Black Lightning’s shirt?), Jigsaw is a skinny dude in baggy green pants and a mask with yellow puzzle pieces on them, and Manami is a bit more thickly-built than in the ’90s (like, curvy but STRONG) and wearing black leather more like Xena, while the Maximos are a pair of dudes in black & red (one noticeably chunkier than the other, who is tiny), and Red is… in red & black.

Right away I LOL because I always associated Manami Toyota with being rather small; she’s not that tall-looking in AJW and spent much of her career being rather slender- but here as a more strongly-built woman she has the same height and noticeably more body mass than two of her three opponents! I mean, I was concerned that “Woman vs. Man” wrestling, something I’ve always been uncomfortable with, would look too unrealistic, but I bet she could beat the s--- out of half of these guys for real. Like, it’s hilarious to me that wrestlers have gotten so tiny by 2011 that an average-sized woman is now LARGER than two of them! She’s probably about the size of Darby Allin or Jungle Boy in AEW, actually- which makes you realize how big Aja Kong, Bull Nakano and others were.

Jigsaw & Chunky (Jose?) Maximo start us off with basic indie armdrags & kicks to the head that are quickly no-sold, and Jigsaw hits a tope into a “DDT” (like, Maximo just lightly set him down) on the floor. Quack & Red do an indie flippy sequence into La Majistral from Red, but Quack holds him upside-down like an adult holds a toddler (which in no way looks like it could hurt, but is apparently a lucha submission). He sets Red up for Manami’s “dropkick to the spine” spot and she boots Smaller (Joel?) Maximo down and ties him up in her bridging deathlock/headlock and fires off two missile dropkicks for two. She & Quack do a double running palm strike in the corner, into a double-suplex so Jigsaw gets two. Jigsaw dumps him and Red flies in and Team Red work Jigsaw over. Joel does some Mini-Hoss stuff, and Red adds a clothesline for two (why is a guy HIS size doing Big Man Spots?). Jose does a lariat and they single out Jigsaw with a triple-team after knocking his partners off the apron- Red seems to miss whatever flippy kick he was doing and they all hit a triple enzuigiri for two. Jigsaw comes off the top with a Rana and escapes, so Quack hits a bunch of running stuff against Red, looking very much like a normal person trying wrestling- like he’s just so ordinary-looking and he runs at normal people speeds.

Quack hits a DDT on the apron and a springboard splash, and when a Maximo breaks it up he hits a palm strike (helpfully yellow “SHOTEI!” before he does so like a giant dork) into Manami’s missile kick into Jigsaw’s German for two. Red saves and hits a helicopter DDT to put Jigsaw out, but misses two spinkicks and eats Quack’s superkick, but the Maximos do a wicked monkey-flip into BULL’S POSEIDON (hanging someone over your back and jumping down, driving them head-first- Bull Nakano invented it)- Manami has to save him. She tries her version of the Northern Lights Bomb but the fatass Maximo won’t go up for it so it looks like a DDT, and Jigsaw adds a Flying Stomp to Quack’s Swanton to Manami’s Moonsault for a good sequence.

However, the S.A.T.s strike and hit a stupidly-convoluted Indie Move on Jigsaw, with a Maximo lifting Jigsaw in a powerbomb, Red springboard kicking him into dropping him into tombstone position on another guy, then doing a dropkick in that position so he swings up and eats an Ace Crusher from Red. Physics defying and incredibly stupid. Deadlift German gets two. They aim for the Spanish Fly (both guys doing a flipover Rock Bottom off the top), but Jigsaw knocks one off, Manami planchas him, and the other one Moonsaults off, missing Quackenbush, who does a goofy dance and a neckbreaker into a Stunner (68 Comeback Special), and Jigsaw comes off with a Flying Elbow for three (11:01). LOL- all that s--- and a flying elbow is still a finisher? Well okay then.

Yeah, this was Indie-riffic to the extreme. Silly, convoluted, overly choreographed moves, negative selling, momentum shifts because lucha rules mean you can’t really stay on a guy for any length of time, insane stuff into two-counts and then an ’80s finisher wins it. I mean, no dissing a Flying Elbow since that would hurt legit, but it wasn’t even a GOOD one- looking it up, apparently that’s “12 Large”- a move used by their friend Larry Sweeney, who took his own life shortly before this show, so at least it’s a feel-good moment and was probably good for the story. This bout made it look like Jigsaw was the most acrobatic dude so he had to do all the selling and take all the big moves, while poor Manami had to sit on the apron mostly doing nothing because she couldn’t communicate with the others and that’d be a mess in a match like this. Hence, she kinda just does three different sequences separated by a few minutes each. She honestly didn’t even take a real MOVE the whole match! I’ve heard Quackenbush is very good, but he looks like some generic nobody in this one.