We get the debut of an Actual Intro consisting of shots of local landmarks that have nothing to do with the wrestling like the cutaway shots from The Room. Herb introduces the show sounding like your car driving in fifth gear with the handbrake still on.

Also Ken Patera threatens Billy Jack over daring to think he has a better Full Nelson than him. The only thing worse than a Patera match is a Patera promo.

Keyes would later evolve into XPW’s Tool, the 8mm homage/blatant theft. Crowd serenades Orndorff with WON-DER-FUL chants as Paul takes him apart like Keyes watching Nicholas Cage films. Keyes gets slammed outside for shits & giggles until Paul finishes with the piledriver.

Pre-recorded promo from Orndorff letting us know he’s pissed at Dr. Death for attacking him from behind. Wait what attack? Last time they interacted was three weeks ago and there was no attack? I’m assuming Herb put this in the wrong episode, another reason he’s the Tommy Wiseau of wrestling.

Like the last time this doylum showed up, they’re acting like he’s the Strongbow Sr. despite there being a forty year difference between the two. Herb then brags about how big Strongbow’s teepee is until he cracks himself up. Crowd loves Cactus Jack which is hard for Bruno to understand because he breaks all the rules ”and isn’t nice to look at.” Strongbow gets a back body drop (called ”a nice flip” by Herb) and a splash until Cactus realises this isn’t the original Strongbow and stops selling for him. Junior goes to relax on the outside as Bruno warns Cactus to ”not get the injun angry” before bonking a bin over his head. Ref tries to count out Jay but Cactus can’t resist going back for more punishment, even with the referee attempting to stop him. And they wondered why he was being cheered? Strongbow smashes Cactus with a side suplex onto the floor and a wandering bin.

Strongbow livens up once he realises Cactus loves doing all the work and continues by hurling Cactus over the guard-rail, dumping rubbish over him and sticking a bin on his head. That’s enough effort so Chief Fake gets him back inside and applies a sleeper hold aaaand my version cuts off as Herb busts out a good old fashioned Hey Folks Just To Remind You It’s 1990 Injun War-Cry at the top of his powdered lungs. According to Cagematch, Strongbow lost via DQ but fuck knows how that happened after all that brawling outside. Cactus’ effort was fun to watch and Bruno’s disgust only made it better.

That’s former WCW jobber Motor City Madman, not Bowling For Columbine. I don’t know, the director is as well built as some of the jobbers on this show. Highlight is a Butterfly Suplex with Moore being sent into the air as Bob watches. Crowd chants for ORNDORFF so Orton uses Moore’s face as a skateboard as he lands knee-first on him and ends with the Superplex. 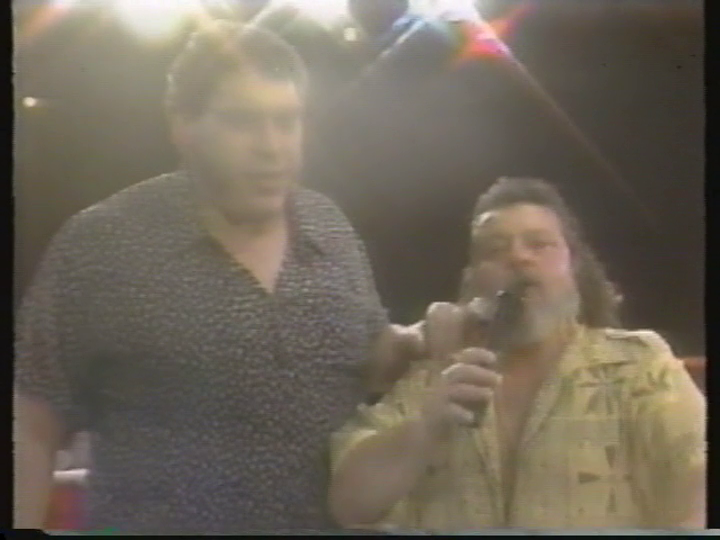 We’re live in the ring for a change as Andre makes his way to a reaction that sounds faker than the dreaded Smackdown hairdryer. Lou calls him the “12th Wonder Of The World.” Andre asks Lou what UWF means, trying to do a set-up line but of course Lou talks all over it before eventually Andre goes “hey I thought it meant You Want To Fight!” That would have been a better name. They edited that part to make it look like Andre didn’t actually know what the name of the company was on Dark Side Of The Ring but I’m the last person to talk about editing things to make people look worse so let’s move on.

In the VICE episode, they went into detail about how Herb declared war on Vince McMahon after Vince politely declined his request for co-promotion or whatever Herb was dreaming, so he went out and signed Andre The Giant “to a multi-year deal that involved wrestling in the ring” to spite Vince. This would be his only appearance before Vince re-signed him.

The Viking vs. Kevin Benjamin

Benjamin is well-built but I don’t think he went anywhere. Viking fucks up a sidewalk slam so badly Bruno can only comment ”I don’t know what happened there.”

Borga busts out power moves like suplexes and looks promising when he’s not messing up. He ends it with a jumping standing elbow.

Winner: The Guy Who Was In Fist Of The North Star (No wonder he got signed to WWF, he looked like he was made out of concrete and moved like it too.)

Post-match, some orderlies attend to Benjamin but Viking can’t stop dropping elbows on him. The ref stops him but Viking gives him another when he’s being lead away on a stretcher. I love anytime a guy beats up a dude on a stretcher so go Vikings.

Having David in the death-spot before the main event Non-Squash Match is asking for trouble. If he was a boxer he’d be John Ruiz. David goes through the motions with some perfectly acceptable wrestling moves with all the enthusiasm of night shift. Arm-bars, powerslam, figure four, end, crowd boos David.

Bruno calls Billy Jack a ”very likable guy”, confirming Bruno’s never met him. Well, all other main events have gone to a non-finish or some bullshit count-out thing so I’m really hyped for the bought to decide who can give the least effort. Half the crowd come alive to chant ”JAILBIRD” at Patera, disgusting Bruno. He tries to give a reason for these two feuding from years ago when they teamed up, already out-working the wrestlers. Patera stalls a bunch before calling a test of strength which lasts a few minutes and doesn’t go Billy’s way. Patera applies a wristlock which causes Haynes to yelp in pain. Billy counters out and Ken accuses him of hair-pulling. Bruno doesn’t know what he’s doing, it’s impossible to tell if he’s trying to be heel or if he’s just bad. Patera continues to play pussy while maintaining a strong opinion on headlocks. BJ tries for a Full Nelson but Patera gets the ropes. They go a-punching in the corner and both men end up pushing the ref. Patera ducks and BJ punches the ref for SURPRISE SURPRISE the DQ.

Winner via DQ: Ken Patera (I’m glad Patera was protected for that hot run he was about to have.)

Next week our Main Event With No Finish it’ll be Billy Jack Haynes vs. Col. DeBeers in Billy’s last match for the company.

Overall: A step-down from last week in terms of normal enjoyment but the Crazy Drama And Bullshit enjoyment is slowly building so we have that to look forward to.