We’re in Laredo, Texas for the post-Eli Cottonwood era. It’s only been a week and I already miss the blithering idiot. As people have explained, he made an appearance in the original FCW version of The Wyatt Family so thanks for letting me know he had One Last Bungle.

Lay Cool start the show with the six remaining lads and they decide they need to kiss the wrestlers to see how well they work as a team. In a sad moment, they ask “well you want to kiss us right?” and the crowd doesn’t react so Layla El has to ask again but louder to get a pop. “I said DID YOU BRING YOUR SCISSORS???”

The wrestlers have to kiss them as long and softest and passionate as possible with Layla practically begging the crowd to make noise. Husky Harris is as uncomfortable as the fans so he declines (drawing cheers) but eventually relents…so Michelle McCool has a second thought and brings out her own kissing expert and IT’S A BIG FAT WOMAN HERPES AND TROMBONE MUSIC AS HER ENTRANCE THEME because even in 2010 they were relying on the Attitude Era headliners. 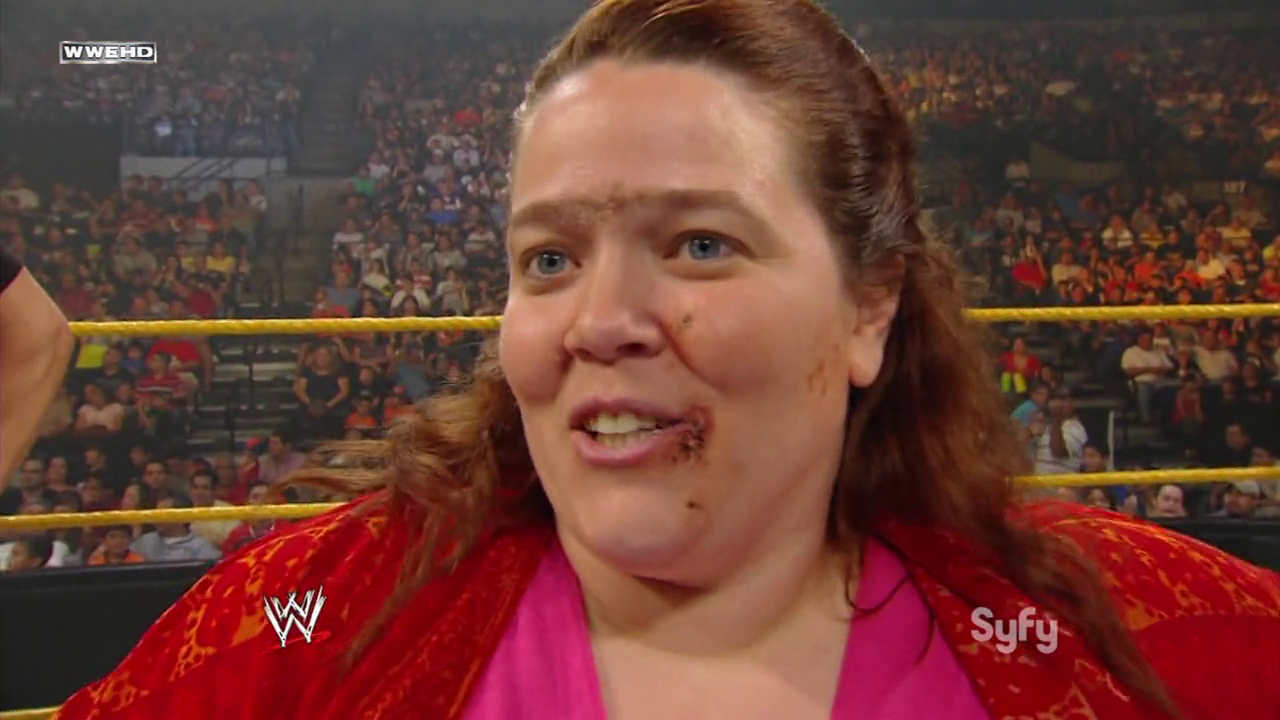 Husky is reluctant but then he remembers she’s not his wife and suddenly he’s enthusiastic. Michael licks her face rather than kiss her, Lucky tries to be sensitive and Percy removes his glasses so he can’t see but still treats her like she’s being lead to the gas chamber. Or doing play-by-play, whichever is worse for him.

But never mind that, the entire point of this segment (and entire season, let’s face it) is to see how much they can fuck with super-serious Kaval so Layla kisses him so he doesn’t have to kiss her and he’s relieved…then McCool says “no you still need to” and the look on his face almost makes this segment worthwhile. 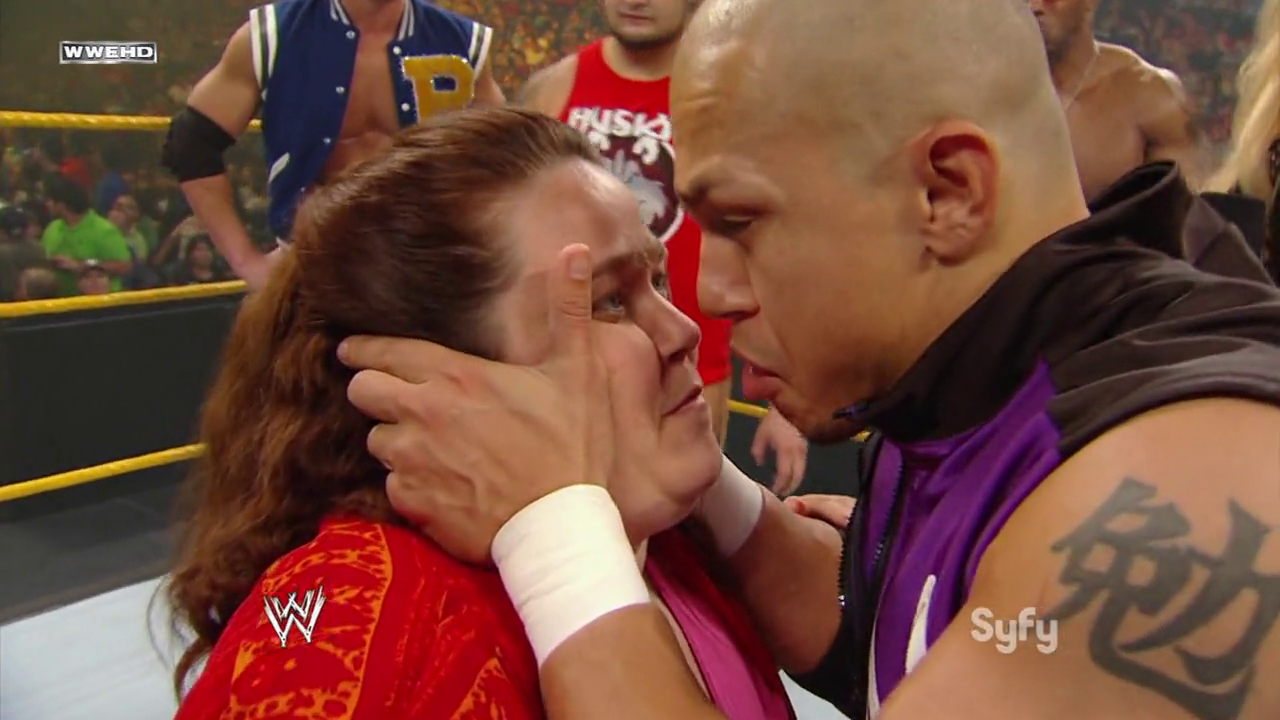 Riley finishes by smothering himself in her face before taking a bump off the kiss, proving Riley really should have done more.

Big Fat Ugly Woman decides the best kisser is Lucky Cannon WHO GETS BOOED BY THE CROWD HAHAHAHAHA. So his gimmick is he sucks and he can’t even win a UWFi style semi-shoot kissing contest without people hating him. There were no winners in Season Two, just varying degrees of losers.

I guess we’re back to humiliating rookies which would usually be a negative thing but without the hazing this show has NOTHING so I’m glad to see the return of hazing.

Rematch from last week because Husky needs another victory. Kaval does a sweet spot where he stands on Husky’s shoulders before dropkicking him.

It’s so beautiful he immediately gets caught on a dive to the outside and slammed into the guard-rail. Kaval barely makes the count back in but manages to recover with a double-stomp counter off a slingshot into the corner. Husky dodges the cartwheel kick in the corner to land The Big Senton to beat Kaval again.

Winner: Not Kaval (Kaval bumping for six guys, all of whom regret their decision to show up.)

The Miz insults Michael McGillicutty and how bad it must be to have such a great Dad but be so mediocre. Michael says “well, we’ll see who is mediocre!” before Lucky Cannon demands The Miz (because he’s more mediocre than everybody).

Winner gets The Miz later. Jamie Keyes is the ring announcer for the match, she’d later appear in Season Three and be eliminated first. So we have that to look forward to. Lucky gets a few shots in before The McGuillicutter ends it after fifty three seconds.

Winner: Michael McGillicutty (The pre-match segment was longer than the match, but they didn’t give Lucky immunity after winning that kissing contest so I’m guessing WWE wanted rid of him.

There’s some bickering between the NXT Pros between matches but I’ve already done play-by-play for a Kissing Contest and I draw the line at bad bickering. Watson lands a nice step-up enziguri and the crowd pops, showing we’ve moved on from his failed coup against MVP. Percy continues throwing dropkicks and clotheslines, before getting a sweet Sunset Flip out of the corner for two. Riley drops Watson as he tries for a Ten-Punch in the corner and ends it quickly after a TKO.

Winner: Alex Riley (Just NXT filler but at least Percy is back on track. For a few weeks anyway).

Michael McGillicutty vs. The Miz

Mediocre Michael gets a quick roll-up for two and Miz isn’t happy with that so spends the rest of the match smashing him as Cole yells “Welcome to the WWE, Mike!” A small package again threatens another upset but Miz gives him a big kick to shut him up. After an attempted comeback from Master Perfect, Miz has enough and pins him easily.

This Week In Daniel Bryan: He went to River Grove, Illinois for a three-way match with Austin Roberts and Steve Boz for Chicago Style Wrestling. Yeah me neither.

Overall: This show sums up my attitude towards wrestling: if you’re going to be bad then be really bad, don’t be boringly bad. As a result I was strangely OK with the kissing segment because I’ll remember it in a week’s time and forget what the main event was in ten seconds.

Here’s Meltzer’s thoughts if you were needing a second opinion.

NXT opened with a kissing contest. This was quite the waste of time, with a punch line right out of the NWO Souled Out PPV which was one of the worst in modern history. At first they teased that McCool and Layla would be kissing all of the guys and then judge who the best kisser is. But it was a bait-and-switch, and they brought out a short woman who had to be 250 (pounds, not years), with scars and sores all over her face and lips and billed her as the 1993 homecoming queen from Laredo High. Some of the guys acted grossed out when they kissed her, really everyone with the exception of Riley and Cannon. The rest would try to avoid it, do it, and then act like they were going to throw up. It came across as real bad acting in most cases. Riley, in fact, even after the segment was over, went back and gave the woman, called Margarita (evidently to allow Michael Cole to utter the line about wasting away again in Margaritaville) another big kiss. Layla tried to save Kaval by planting a big one on him, and he acted like he was some guy who had never been kissed by a hot girl before acting all light headed. But she couldn’t save him as it was ruled he still had to kiss Margarita. The segment was the kind of thing that makes fans embarrassed to be fans, wrestlers embarrassed to be wrestlers, and non-
fans think wrestling is even more low-rent than they originally thought.