The bell rings and we get two minutes of filler, as Yoko waves the Japanese flag and Mabel brings the American one out for a “U.S.A.!” chant. Hilariously, Mabel manages to botch WAVING A FLAG, tying it up around the staff. He tags out to Mo and we get a Yoko/Booger chat, and FOUR MINUTES IN, we have our first lockup. Mo grinds out a headlock but gets dropped, then dodges an elbow- M.O.M. works the arm super-lightly while Booger refuses a tag. Yoko sells the single lightest shoulder-tackle I’ve ever seen, and falls to a lariat. Another armbar and Mo slugs away, but foolishly headbutts him, as Yoko’s Samoan genetics force Mo to sell- KAYFABE, guys! He’s supposed to be from JAPAN now!

Yoko uses light strikes, but misses the Ass Avalanche and falls to a clothesline! Collision and both are down, but Booger goes over to bug Fuji instead of making the tag! So Mo just charges in instead of making his own, and gets caught in the Belly-To-Belly Suplex for the finish at (8:03). Booger celebrates like HE won the match, leading to a great pantomime performance as Yoko’s like “WTF was with those tags?” and Booger’s like “Hey no, I TRIED to tag…” and mimes putting his arm out, but Yoko isn’t having it. Booger shoves him but Yoko whacks him and headbutts him down, sending Booger scurrying away, then gives the crowd one last look.

Oh man, this was HILARIOUSLY lazy. Like four straight minutes of stalling and then the lightest strikes possible, hitting lariats so bad they’re like an inverse of Stan Hansen’s. The story was pretty funny, as Booger kept walking away from his corner for the tags and Yoko was forced to beat both members of Men on a Mission by himself. That makes M.O.M. look weak as shit considering Yoko doesn’t even tag out, but at least it mostly hurts Mo, who nobody cares about (you can see Mabel try to tag him but is way too late- I mean, he’s not built to stop pinfalls, ya know?). This whole thing comes off like an elaborate rib by Yoko to amuse himself and the boys- I can bet they were at the curtain laughing their asses off at this.

Rating: DUD (Dear God- BRET HART would deride these guys for working so lightly on a house show)

BASTION BOOGER vs. “THE MODEL” RICK MARTEL:
(Nov. 28 1993)
* Oh man- the epitome of a Dream Match: The ugliest man in wrestling versus the handsome, bronzed, image-obsessed model. Rick oddly worked against heels a bunch during his last years with the WWF. Unfortunately, he’s here wearing the Universal Sign of the Fading Heel- powder-blue undies.

Poor Martel just can’t even with this guy, reacting to the sight and smell of Booger, while JR & Heenan both pile on the jokes about how disgusting and filthy he is. Martel actually sells the impact of Booger’s stench and takes some shots for it. Booger goes to the eyes & throat, but Martel dodges an avalanche and hits a hiptoss (I mean, sorta). Booger avoids a dropkick by grabbing the ropes and hits a legdrop for two, then chokes away. Big splash misses, and Martel chokes away, but gets a whip reversed and NOW takes that avalanche. Clothesline & Booger now does a little shimmy and sits on Martel’s face (oh god that IS revolting), but they’re way too close to the ropes and Martel avoids the pin. He sells this as the most vomitous thing that’s ever happened, cartoonishly gagging and coughing around the ring, then, in a beautiful ending, grabs the damn Arrogance perfume and fumigates Booger with it, causing the referee to call for the bell (3:40).

Actually not bad for what it was- Heel vs. Heel and there was even PSYCHOLOGY with making up for previous missed moves. Also, like, who else has the capability to counter Booger’s stench? That’s the DEFINITION of psychology!

Rating: *1/2 (shockingly not that bad for a short match with a DQ ending) 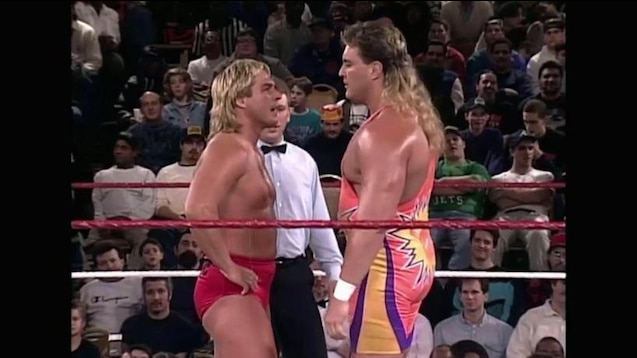 Damn, now I have ANOTHER dream match to find!

“TERRIFIC” TERRY TAYLOR vs. JIM POWERS:
(WWF Prime Time Wrestling, Sept. 11 1992)
* This is one I might actually have seen, as I have a distinct memory of seeing exactly one “Terrific” Terry Taylor match before he disappeared, the Red Rooster having done permanent damage to his career (though I forgot he was in the ’93 Rumble). And here he’s up against jobber Jim Powers… who even gets theme music tonight! He’s definitely cycling off the roids, though, looking pretty flabby by comparison to his usual self. Taylor’s in a shiny robe and has NO theme music, which was definitely rare back in the day (at this point, I think it was IRS and nobody else). Taylor’s in black trunks, while Powers is in red. The similar gear makes this look more like a WCW match to me- basic undies and no wild colors or anything.

Taylor controls with suuuuuuper basic stuff, working heel by repeatedly telling Powers to hit the showers by pointing. Powers comes back with bodyslams while Monsoon & Lord Alfred try to think of undefeated wrestlers- just Tatanka & Razor Ramon. Taylor bails and whines about punches, then Powers works a headlock- jeez, Taylor isn’t getting ANY kind of a push. Monsoon does his patented shitting on the side headlock (“I don’t believe I’ve ever seen ANYONE beaten with this particular hold…” he mutters to Lord Alfred), but Terry comes back with a jawjacker and some punches. Backbreaker gets two. Neckbreaker does, too, but Powers comes back with an atomic drop AND shots into the turnbuckle- kneelift & dropkick get two. Taylor puts his foot up in the corner, but gets caught putting his feet on the ropes on the pin. Powers rolls him up while he’s jawing with the ref, and a running cross-body gets two. He whips Terry off the ropes to finish, but puts his head down and gets caught in a SIT-OUT POWERBOMB (in 1992 WWF!) for the three (6:54).

Taylor was just totally the wrong guy for the WWF- he looked like an NWA guy and fought like an NWA guy, and not in that “funny mismatch” way like Ronnie Garvin or Greg Valentine- he just came off like he didn’t belong here. And it’s like he learned how to wrestle heel by reading a book on how to do it, and not by having SEEN it. The match was pretty boring and right out of 1987 (weird that five years seemed like an eternity back then, but I’m old now), with Powers using his classic 1970s offense, but hey- Taylor hits a Ligerbomb.

Rating: * (pretty dull and basic, with an extended headlock spot in a seven-minute match. Good finish, though)

AND NOW FOR YOUR WEEKLY HIGH VOLTAGE MATCH

THE DUNGEON OF DOOM (Meng, Barbarian, Big Bubba & Kevin Sullivan w/ Jimmy Hart & Hugh Morrus) vs. HIGH VOLTAGE (Ruckus & Kaos), JOE GOMEZ & JIM POWERS:
* Okay, now THIS is fantastic- the asinine anti-Hogan stable’s non-Giant members are in a big 8-man tag match, but against utter jobbers in High Voltage (still very new), Joe Gomez, and WWF stalwart Jim Powers, now on Steiner-tier steroids. The Faces of Fear are in black tights, Bubba’s dressed like a biker for some reason, and Sullivan’s portly dad-bod is in a generic white shirt, making him look like he just wandered in from the stands. Voltage are in pink, Gomez in black tights, and Powers is in a black singlet.

The Dungeon take turns mauling Gomez, but Bubba puts his head down and gets kicked, and then Ron the Leprechan (who the fu….?) comes down to try and bite Jimmy Hart and hits Gomez on the outside before running back to the locker room, while Ruckus actually hits a slingshot cannonball on Bubba to the outside. Bubba hits the Owen Enzuigiri to come back but JIM POWERS of all people is a house afire, using his ’80s WWF offense to stymie Barbarian and boots away and both him & Sullivan! Barbarian even SELLS A TURNBUCKLE SHOT! He actually has to manage a stop Powers’ fury, bringing in Kaos, but a double-headbutt kills his momentum. Barbarian hits a Powerbomb and puts him in the tree of woe for Sullivan. Boss Man Slam finishes at (3:08), the dumb rookies just standing there like “aw, geez, I hope he kicks out” or something. Man, at least book the heels to jump them to prevent a save.

Effectively a nothing bout, since it’s only three minutes and that’s not enough time to give anyone any shine in a match with eight people. Rage only hit a single move before getting killed, and Powers had his funny little flurry of offense before taking a single elbow and bailing for the whole rest of it. The rookies actually looked better than anyone short of Meng, though.

THIS HAS BEEN YOUR WEEKLY HIGH VOLTAGE MATCH

I love that Wrath’s failure in WCW still pisses fans off, and is still held against Kevin Nash.

WRATH vs. THE RENEGADE:
(WCW Nitro, Aug. 14 1998)
* Yes, welcome to the era of WCW Nitro when Wrath, with a huge upper body, trim waist, and long hair, looking like a fucking STAR, went out there and got a “Goldberg Starter Push” before one of wrestling’s most infamous squashes and a huge de-pushing killed him DEAD. And among his victims is jobber-era Renegade. Wrath has blue & black gear, while Renegade’s in all black.

Wrath gets jumped at the bell, but rapidly beats Renegade down and hits a series of kicks. Renegade reverses a whip to the corner and hits his Handspring Body Attack… but Wrath just walks forward and shoulderblocks him down! Oh yeah, that’s how you push a monster. Slowly puts on the Meltdown (pumphandle powerslam) while Renegade helplessly shakes his head, and we’re done at (1:28). Super-awesome and great fun, buuuuuuuuuut this is apparently Renegade’s last match before WCW fired him, and we know what happened then. And this was back when early deaths were STILL SHOCKING in wrestling!

Rating: 1/2* (Wrath squashes are as succinct and almost as fun as Goldberg’s)