Note: Not from the below match. Yes they ran this more than once.

It’s time for more Dream Matches- starting with the ultimate in obesity, as 1,000+ lbs. of humanity collide in a singles match! Also some major “Wait, that really happened?” stuff, with Balls Mahoney as an EVIL SANTA, Diesel fighting goddamn TYPHOON, and Jim Powers WINNING A MATCH. And an all-time tag team dream bout, as High Voltage take on the Beverly Brothers! As WCW jobbers! oh, plus more Joe Gomez goodness, and “HARD WORK” Bobby Walker makes his “Dream Matches” debut!

As always, everything here can be found via YouTube, but can’t be posted here.

The match has the most incredible opening moment ever, as they finally stand across the ring, measure each other, and COLLIDE- Mabel actually knocking Yoko on his ass and celebrating while Yoko bails to recover. He goes to the eyes after teasing a lockup, but Mabel uses his raw agility to duck a clothesline and hits a jumping shoulderblock to send Yoko out AGAIN. They smash each other’s heads into the ring steps, and an exhausted Yoko shoulder-checks Mabel back out- back from a break with Yoko hitting headbutts on a rubber-legged Mabel, but goes to the nervehold as he just sweats and sweats. Mabel fights free and drops him with a pair of clotheslines, and the TakerBreaker legdrop gets a VERY close two-count. Cornette is beside himself outside the ring as Mabel hits a cross-body of the second rope (!!), also getting two, then he GOES UP (!!!), and Yoko Flair-Tosses him halfway across the ring! Yoko is dying, but manages his running ass-avalanche, knocks Mabel over, and quickly jumps up for the Banzai Drop at (5:57).

Okay, this match made Yoko look ridiculously out of shape (especially as Mabel is almost as big and had no such issues- Yoko made IRS look like John Cena), but the sheer obesity on display was impressive, and they went all-out in hitting big stuff and selling for each other. Yoko was very generous taking big bumps off of clotheslines and the like, and Mabel actually went up TWICE and took a damn Flair-Toss before getting crushed. Not bad if you like Big Man Matches. 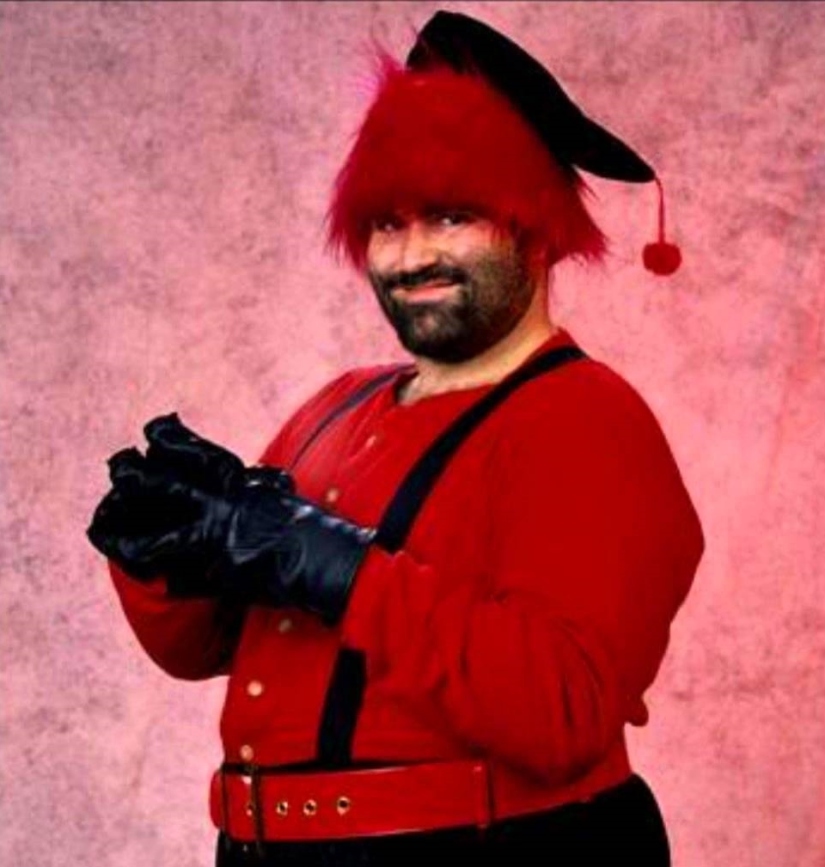 Proof this was a real thing and not a fever dream. Phantasio was real, too!

XANTA KLAUS (w/ Ted DiBiase) vs. SCOTT TAYLOR:
* Yes, it’s XANTA KLAUS, the infamous hire of Ted DiBiase. I still remember Vince’s cry of “NOT SANTA!” when he “sold out” to the Million Dollar Man (“Say it isn’t so!”). Thankfully, it turned out this was merely an evil counterpart to Santa, hailing from the South Pole, and instead of a long beard he was just indie wrestler Boo Bradley (the future Balls Mahoney) with a short beard and short hair acting as a heel. His black & red Santa outfit keeps the suspenders and big black pants, too. What a glorious gimmick. Short-ass shelf-life, though, which is why I’m astonished they even bothered. Did this guy even do a job to a babyface before going away forever? I will say his menacing Christmas music was pretty rad, though.

Xanta immediately hits a boot to the gut and chokes away on Taylor and hits an awful clothesline from an Irish whip as DiBiase (in an insert) and the commentators just talk about Ted’s search for a “New Million Dollar Champion”. So I guess this gimmick was just a platform to discuss the coming of the Ringmaster? Snapmare, running elbowdrop and a big underhook Uranage (holding via the waist instead of across the chest- the comments call it a Sambo Suplex), and they end it with a Camel Clutch of all things at (1:32). Man, using a CAMEL CLUTCH as a finisher is always death for new heels. Match was totally nothing, and fought pretty lazily by Bradley, who was pretty new to the business and would take a few years before becoming anything.

DIESEL (w/ Shawn Michaels) vs. TYPHOON:
(Sunday Night Slam, August 1, 1994)
* Diesel is the reigning IC Champion, but it’s repeatedly emphasized as NON-TITLE. Like, they obsessively point it out.

The big guys try to outmuscle each other, Diesel hitting knees and and elbows until Typhoon just runs into him to put him down. Bodyslam gets two and Diesel bails while even Shawn looks concerned, so he plays distraction and Nash blasts away and hits a huge jumping shoulderblock, Typhoon hitting the mat. Elbowdrop & a neckvice as we’re already in restholds, but Diesel eyepokes him to stop a comeback, then hits the foot-choke in the corner. Typhoon dodges a charge and hits right hands and a back elbow, but misses a legdrop. Typhoon stuffs a bearhug and hits an avalanche, but tries another and runs straight into the Big Boot, and a MONSTER clothesline finishes at (5:01). Ah, the old standby when a guy is just too rotund for the Jackknife. Actually not a bad mini-match, as Typhoon brought it to Big Daddy Cool and both hit some big power moves until one man fell. Nash had to fight for it, but still won pretty quickly.

Rating: ** (and that’s not just my bias towards Fred Ottman matches!)

Horshu, who had his hair cut into a horseshoe shape. Because… I don’t know. Of all the gimmicks in wrestling history, you could at least see why SOMEONE thought they might get over, even if they were stupid. Even the Ding-Dongs (“Hey, kids like loud noises, right?). But THIS? What even IS this?

HORSHU vs. JIM POWERS:
(WCW Saturday Night, Feb. 21 1998)
* Yes, it’s Luther Reigns back when he was a Power Plant jobber in WCW, extremely lean and with the world’s stupidest haircut- a horseshoe-shaped bit of hair on the top of his head. And… HORSHU? Is that supposed to be like the way a Japanese announcer would say his name? What IS that? And here he is against Jim Powers, who carefully establishes why he never became a name in wrestling, as with fourteen years in the business, the only mannerism he exerts on the way to the ring is to rub his wrists like he just got let out of handcuffs. Horshu’s in black trunks, and Powers is in a black & blue singlet, and on ALL THE STEROIDS.

Powers wins a “rote Power Plant training” sequence and hits a clothesline, causing Horshu to beg off. He suckers Powers and hits a double-arm suplex and does his dumb horseshoe-shaped arm symbol. He does more ’80s offense and hits a chinlock, then a back elbow when Powers charges in. He does a SECOND chinlock and SECOND bodyslam, three minutes in, but misses an elbow off the ropes and Powers slams him into the turnbuckles, whips him off the ropes, punches him in the stomach, hits a kneelift, then whips him off the ropes AGAIN for his Powerslam finisher (3:52). Every bit of that ending sequence is shit Powers has been doing since 1988! Look at this 1980s squash against Bob Bradley- it ends with the SAME GODDAMN SEQUENCE!

OMG these guys literally just wrestled the most basic 1980s match ever. Jim Powers, with YEARS in the business, still hadn’t moved his offense out of the realm of the MSG House Show, and it showed here. Horshu was so bad he was repeating spots like chinlocks & bodyslams, so it’s hard to blame JUST Powers, but this is the definition of a nothing match.

HIGH VOLTAGE (Rage & Kaos) vs. MIKE ENOS & WAYNE BLOOM:
(WCW Nitro, 30.03.1998)
* OH MY GOD YES- Beverly Brothers versus High Voltage! The ultimate generational dream match! So Enos & Bloom were among the more inexplicable “let’s hire WWF guys and use their real names and make them jobbers” hires WCW made- both guys could go but had no star power, but… just using them as regular ol’ jobbers made them out to be wimps. And God knows what they were making. Both guys (who are HUGE, absolutely towering over the roided-up Power Plant grads Rage & Kaos) are in long black tights, while Voltage are in neon yellow. They’re said to be back from “a tour of the Orient” (Rage actually wrestled for New Japan for a while after his WCW run, too!).

Rage uses “MMA” to control Enos, who powers out, so Larry Z immediately blathers on about how “useless” such an impressive power-move was. Well, Larry is a guy who is known not to waste energy, I’ll give him that. Ugly double-press-slam gets two. Kaos with a loose Million-Dollar Dream as a resthold, and Rage mimics Rick Steiner with a weird overhead belly-to-belly. Bloom comes in with an axe-handle off the top on Rage, taking over. Double-arm suplex, and Enos uses a cool fallaway slam from the middle rope, actually getting some of the fans into it. Rage hits a clothesline for the comeback but heeeeeeerrre comes The Giant, stalking towards the ring. Kaos lands a gutwrench powerbomb, and The Giant hits the Chokeslam on a terrified Enos for the DQ at (5:06). One for Bloom! MONSTER Chokeslams for Rage and Kaos! See, now that’s how you book a giant. Maybe don’t kill one of the rookie tag teams you’re kinda trying to build up while doing it, but not bad. “Roddy Piper- you want mean? You got mean”, he declares. I think this is a War Games thing.

Well obviously the Giant interrupted a mat classic in the making, here. Voltage specialize in not doing more than they’re capable of, meaning they can be counted on to at least hit a couple of decent moves, and the veterans here also did some good stuff. Just really short and ended up nothing.

Rating: *1/2 (perfectly fine match until The Giant came out)

THIS HAS BEEN YOUR WEEKLY HIGH VOLTAGE MATCH

JOE GOMEZ & THE RENEGADE vs. JIM POWERS & “HARD WORK” BOBBY WALKER (w/ Teddy Long):
(Jan. 11 1997, WCW Saturday Night)
* Yes, this is back when Powers had a MANAGER, with Teddy adding… zero percent to his act. Though their theme music sounds like the piano bit to “Eye of the Tiger” on repeat. Jim’s in orange & black (and still doing the “tighten his wrist tape” thing down the aisle), Bobby’s in blue tights, Gomez is in black pants & Renegade’s in yellow trunks and a leather jacket, with no facepaint.

Renegade hits two hiptosses and a slam on Walker, who trips up Gomez, who gets hiptossed and slammed by Powers, then clotheslined for one. Dusty appears shocked that Powers hit “actually a good move there”, but Gomez slams Walker. Okay guys, you all know how to do body slams- I get it. Gomez misses an elbowdrop and Walker… hits a running cross-body, hit almost like a leaping strike… for the win (2:02)! Gomez jobbed to a CROSS-BODY!?!? Guys… forgive the blasphemy, but I’m starting to think he might not be that good.

Rating: 1/4* (the most basic of basics and the jobberiest finisher ever)