Striker lines up the NXT Rookies like they’re about to be blindfolded & shot and informs everyone that next week, someone’s getting eliminated. But until then we have the Obstacle Course Challenge. Striker lives out his dream to be Olmec as he lists the course and BOY OH BOY does this go on and on.

First they have to scale the monkey bars, climb the suspended ladder, head over the guard-rail and through the stairs up to the concession stand to drink a soda, head back to the ring to juggle for five seconds before doing the dizzy-bat challenge and pushing a heavy box over a finishing line. The winner of the challenge gets a PASS that allows them to not be eliminated next week.

Daniel Bryan (with bandaged ribs after three Batista Bombs on Raw) gets to go first but can barely do the monkey bars due to his injuries. Sadly the crowd are barely reacting to the supposed fan-favourite and this challenge is begging for some of this to get the blood pumping:

Don’t know why the official themes got taken off YouTube but anyway Bryan struggles with drinking the soda as he’s healthy. Cole: “Speaking of Bryan’s ribs, this may be a rib on all of us.” Funny he says that, here’s a bit from Bryan’s book:

In the middle of one challenge, we had to run upstairs and drink a big cup of soda as fast as we could. (Originally it was supposed to be us eating a hot dog, but since I was vegan and they couldn’t find any
veggie dogs, it was switched.) Since I don’t usually drink carbonated beverages, it took me almost sixty seconds to complete that task alone. That’s right, on a show that was regularly viewed by one million people, NXT viewers were subject to a full minute of watching someone try to drink a soda. Now, that is quality television.

Bryan juggles well as Cole points out there’s only two balls so it’s not juggling it’s just “tossing.” Bryan finishes with 2:24 and Miz is furious. He doesn’t care if he’s got bad ribs, there’s no excuses when you’re The Miz’s Rookie so he’s taking on Tarver next in the battle of the winless records. Cole points out Miz’s hypocrisy because on Raw he got out of a match by presenting a Doctor’s Note and they show a replay with Miz branding a piece of paper saying DOCTOR’S NOTE. 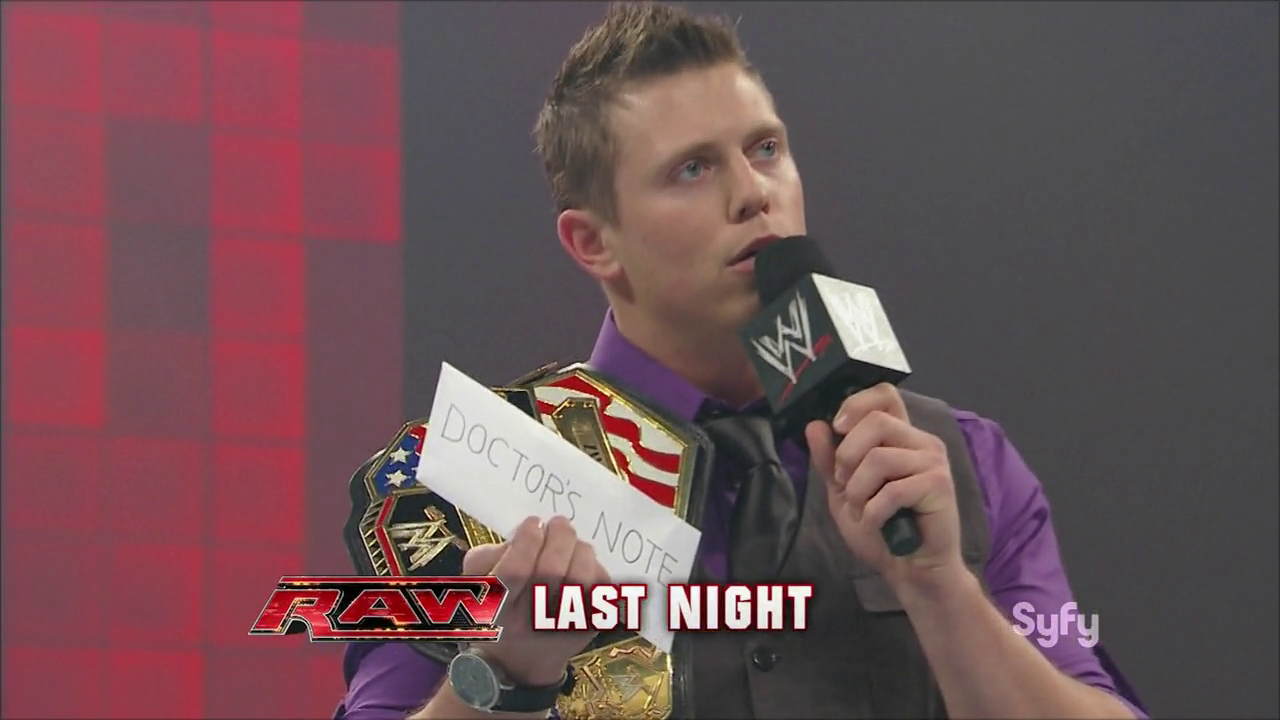 Anyway the Raw match would be infamous for Batista actually selling for Bryan and giving him a good sprint before losing in five minutes in a Beat The Clock challenge. But never mind that, here’s Tarver’s amazing redbubble NXT shirt: 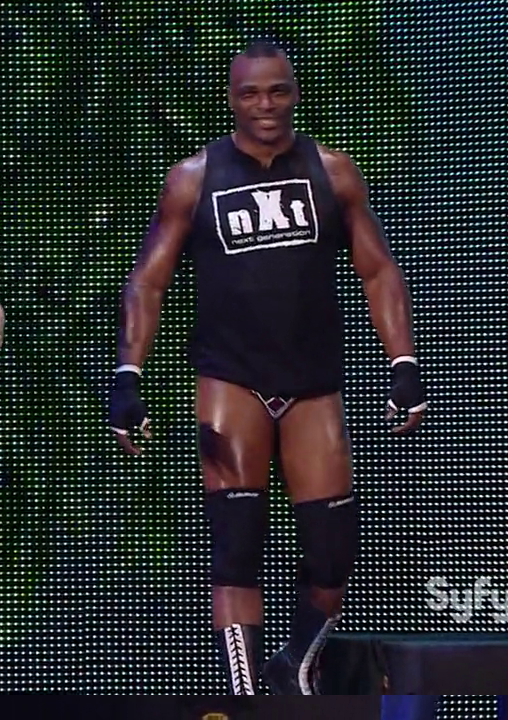 Bryan’s got bad ribs and soda in his belly so Tarver’s able to have his way with him. Bryan’s able to block a charge in the corner and lands a flying knee. However Tarver goes to the chinlock as Bryan achieves the impossible by having a match go so long on TV it goes to a break. When we return, Bryan is football kicking Tarver into the chest (ah that’ll never take off) but the rib damage is too great so after delivering a suplex, Bryan is unable to capitalise and Tarver lands his spinning slam to go 1-7.

Winner: Michael Tarver (Bryan did his best to tell a story but it doesn’t work when the crowd’s not listening.)

Carlito orders Tarver to help Bryan up like a pro…before nailing the Backcracker as Tarver goes nuts. Meanwhile Miz watches and doesn’t do anything. I can’t think why Bryan no longer has any crowd support.

Oh don’t worry, Bryan’s not the only huge loser on this show. Here’s a replay of Young trying to sell programs last week and saying “I’m sick of this” as he’s mobbed by kids like the start of the Hulk Hogan’s Rock ‘n’ Wrestling Cartoon. So CM Punk admonishes Young backstage for daring to be sick of sitting under the learning tree so he’d better win the Obstacle Course OR ELSE.

Heath Slater annihilates the Obstacle Course in 1:36 with Darren struggling on everything and getting 2:07 but giving us this moment of joy to break up the boredom:

Justin Gabriel shatters Slater’s record with 1:29 and the crowd finally reacts to something positively when he juggles one-handed. Otunga complains his soda isn’t Diet and only gets 1:35.

The music guy has no idea what’s happening (he must be a wrestler too) and tries to play R-Truth & NXT’s theme at the same time. Truth slaps Otunga but misses a charge allowing Otunga to play the role of Ken Patera with his slow-paced slams. Truth reverses an Abominable Stretch into one of his own before R-Truth collides with an axe kick and a corkscrew elbow gets the win after barely anything.

Winner: R-Truth (Apart from the Corkscrew Elbow winning a match for the first time ever, there was nothing to this.)

Wade Barrett struggles with the monkey bars so thinks “sod it” and gets disqualified. Skip Sheffield misses the record by two seconds but Striker congratulates him, resulting in Cole mocking him as this show descends into quicksand.

Tarver attempts the monkey bars but falls off. Cole thinks it’s because of those gloves and asks Mathews what they’re like because he hangs out at the playgrounds. Mathews responds with “this isn’t Monday, you’re not sat next to Lawler.”

That exchange should have won the Obstacle Course Challenge but instead Tarver taps out to the soda so Gabriel wins immunity.

Striker kills some time by asking the Rookies who should be eliminated next week and Tarver responds with “me” because all the rookies would be safer without him around. Barrett & Young brawl and Bryan also says he should be eliminated too, but says it in a way to get support from the fans. Here’s more from Bryan’s book:

One week prior to the first elimination, in another unscripted interview, Matt Striker asked each of us at the end of the show who we thought should be eliminated. Most guys pinpointed Michael Tarver because of his bad attitude, but since I’d lost to him earlier in the night, it didn’t make sense storywise for me to say him. Since I had lost to everyone else on the show, it didn’t make sense for me to say any of the others either. So, thinking it was the right, humble good-guy thing to do, having not won a match, I said I should be eliminated. Afterward, Miz told me I shouldn’t have even put that perception in the fans’ minds. I was facing an uphill battle as it was. To me, it seemed logical; plus, I figured there was no way I’d place last in the Pros Poll and get eliminated.

Overall: I don’t know if they’ve been killing time until the Pro Poll or people backstage didn’t know what to do with this show but it’s turned into a contest to see how badly they can f--- with stupid independent wrestlers who think they can be big WWE stars. Some of the segments could have worked with a crowd that cared but they were dead for everything that wasn’t R-Truth or Young falling over so you can give this one a miss or read Bryan’s book instead.