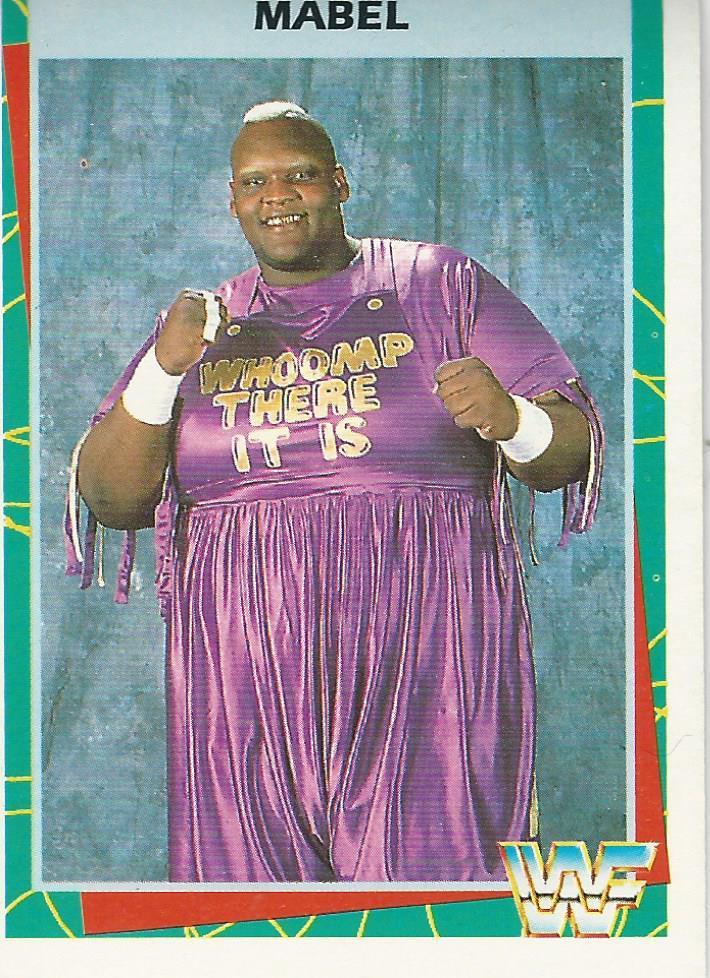 The faces get jumped before the match, but Typhoon ducks under a double-clothesline and hits a double one of his own to bowl them over! You don’t often see Yoko getting knocked on his ass with the first move of the match, but there you go. The heels bail for a minute or two on the floor while the crowd 1994s it up with a “WHOOMP- there it is!” chant. Yoko rakes Typhoon’s eyes and they do FAT MAN STAND-OFF charges, Typhoon just slamming into him over and over again until he falls over! Yoko collapses onto his ass even after getting up, and Crush tries using speed on Mabel, but gets caught on a cross-body and slammed. Taker-Breaker Legdrop gets two, but Yoko grabs Mabel’s leg and Crush hits the thrust kick and the worst inverted atomic drop ever (I mean, why try THAT?).

Yoko stomps away, but Mabel fights up to cheers and Yoko SLAMS into the corner, bouncing off as Mabel dodges. However, the ref misses the hot tag, so Crush tries a slam, resulting in Mabel hitting an INSIDE CRADLE (!!) for two. Crush ultimately just bowls him over as Mabel takes a great flat-back bump off that, getting two. Crush uses a resthold for the only lazy part of the match, then uses “martial arts” and goes up (!) and misses a Flying Knee, Mabel finally tagging out. Yoko takes a HUGE flat-back bump off a Typhoon clothesline, Typhoon slams Crush and everyone’s in the ring- Typhoon hits another big shot, but Crush thrust kicks him in the back of the neck while he’s posing and the ref is arguing with Mabel, allowing Yoko to hit a bad Belly-To-Belly Suplex for the pin (8:27), breaking Young Jab’s heart.

Shockingly spritely match from the fat guys, with Crush, Master of the Resthold, taking up the laziest part of the match. I mean, Yoko was bumping his ASS off, seemingly trying to justify his position by doing these big jumping flat-back bumps off of everything Typhoon did. 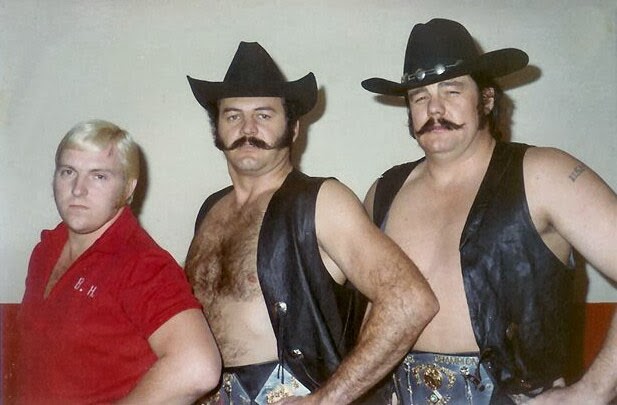 These guys just look like HUGE assholes- Lanza like a dude who gets shot by Clint Eastwood in the third act. Tremendous heel look.

3/5 FALLS MATCH:
BUGGSY McGRAW & THE BLACKJACKS (Blackjack Mulligan & Lanza) vs. GORILLA MONSOON, IVAN PUTSKI & HAYSTACKS CALHOUN
(30.07.1974)
* What a weird cross-section of random guys I didn’t know interacted- and with Vince McMahon Jr. on commentary! Monsoon is now a beloved 6’5″ Monster Babyface in green, Calhoun’s still around in his overalls and hillbilly beard, and there’s Ivan Putski- ethnic hero and apparently a very, VERY pregnant powerlifter at this point- huh, were 1970s roids capable of doing that, too? I thought that was a recent phenomenon. I dunno if I’ve ever heard of McGraw, who’s a big burly dude with a beard and a Jack Victory-tier fat ass. The Blackjacks are Barry Windham’s dad and a future WWF road agent, and were the WWF Tag Team Champions. Lanza has SUCH a great heel look- he looks like a guy who would kick a dog for fun, then laugh. You can tell it’s a WWF card because even though it’s the 1970s five out of the six guys are freaking GIANTS.

First Fall: Putski slugs Mulligan in the gut, sending in “The Bugger” (as per Vince), who gets distracted by something on the ceiling (Vince: “said to be not playing with a full deck”), but brawls with Putski and hits a bearhug (with like, no lead-up at all. He just runs in and gets it on the much, MUCH smaller man). Putski uses his Polish Power to spread Buggsy’s arms out, then gets his OWN bearhug, sending the heel into full cartoon hysterics, so Mulligan runs in. Lanza tries to bodyslam Haystacks like an idiot, but the heels corral him into the corner and McGraw actually strangles him with the tag rope, yanking it from behind, but Mulligan’s pushed into the babyface corner and the 6’8″ heel begs off like a coward from Monsoon. That’s great. Chops for everybody! A big chop lays Lanza out and Putski drops his ass on him for the first fall (5:56).

Second Fall: Monsoon and Mulligan both get double-teamed- Monsoon then works over Mulligan, but McGraw handily powers him down- Lanza hits the Iron Claw, sold great by Monsoon, who fights up but gets hauled back down. The heels strangle HIM, now, and he’s taking a major ass-kicking, the ref missing a tag to Putski (now wearing a t-shirt a fan gave him), but the Polish one gets in and just throws windmill punches all over the place, selling NOTHING from the heels and gobbling them up. They try to stuff him, but the babyfaces all hit the ring and now it’s a three-man sandwiching of all the heels in the corner! Haha, this is great! Like 1300 lbs. legit just crushing those dickheads. And Monsoon hits an AVALANCHE onto all that! Lanza takes a beating in the face corner, but soon Everybody Fights and Monsoon’s being strangled by Lanza’s rope (pulling it with his TEETH, too), but reverses it on him to a big reaction! He hits a full nelson on McGraw, then cleverly turns around right when Lanza’s about to nail him, causing him to beg off. And then the New York State Athletic Commission Curfew hits at (8:51), sending us home early- the babyfaces win with one fall.

The match was actually great fun, despite containing like one single wrestling hold. Monsoon of all people (6’5″ and with major booking power) sold like a champ and had some great clever moves (circumventing heel cheating), while the dwarfish Putski was Mr. Selfish, getting himself over and mugging for the crowd at every opportunity, giving nothing to the heels (if you’d have asked me to start which of the 5’8″ fireplug or the 6’6″ 400-lber with booking power would be the selfish one who didn’t sell s---, I’d have been wrong). The heels were great putzes tonight, just bouncing off the good guys and looking like cartoon imbeciles in the process, and the six-man dogpile in the corner is a great crowd-pleasing spot. Though it’s weird they wouldn’t bother to give this a real ending.

AKEEM (w/ The Doctor of Style, Slick) vs. THE MIGHTY HERCULES:
(WWF TV, 1990)
* Herc, with bloated steroid belly, is still in the powder-blue undies but is a pretty over babyface, while Akeem is in the great guilty-pleasure gimmick of the jive-talking white guy doing “street hand-signals” and what-not. Though without his One Man Gang look, he was kinda hopeless- he had that Hank Hill ass, with relatively skinny legs, making him look like a blow-pop with his big, chubby torso. Herc swings around the chain to start, clearing the ring.

Herc the Jerk gets pounded down to start, but hits a clothesline in the corner and ten punches from there, and a big wind-up Popeye Punch sends him tumbling out in a goofy cartoon bump. Akeem goes for a tete a tete with Slick, so Herc boots the Slickster on his ass and Akeem has to keep him from getting into the ring to fight back! Akeem puts his dukes up in the jiviest way possible, with Herc playing along, but Herc beats on him again, then tries a slam and gets thumped. Akeem chokes him on the ropes, and Slick pulls a rope out of his pocket and strangles him while Akeem distracts ref Joey Marella. Weak thumps in the corner and rope-choking abound, as Akeem just has s--- for offense. He finally misses a charge into the corner and eats the turnbuckles, cartoonishly slamming his own head even once Herc stops, then doing his jive walk while stunned- high knee, clotheslines and… Slick pulls down the top rope, sending Hercules out for the Disqualification (6:08). Aw, you can’t book a finish to THIS? Gotta keep the “Third Megapower” and Akeem strong? Akeem misses his Splash back in the ring, and Herc hits the big body slam to keep his heat.

Rating: 1/2* (Just awful- Akeem wasn’t a good seller and had the weakest Fat Guy Offense ever) 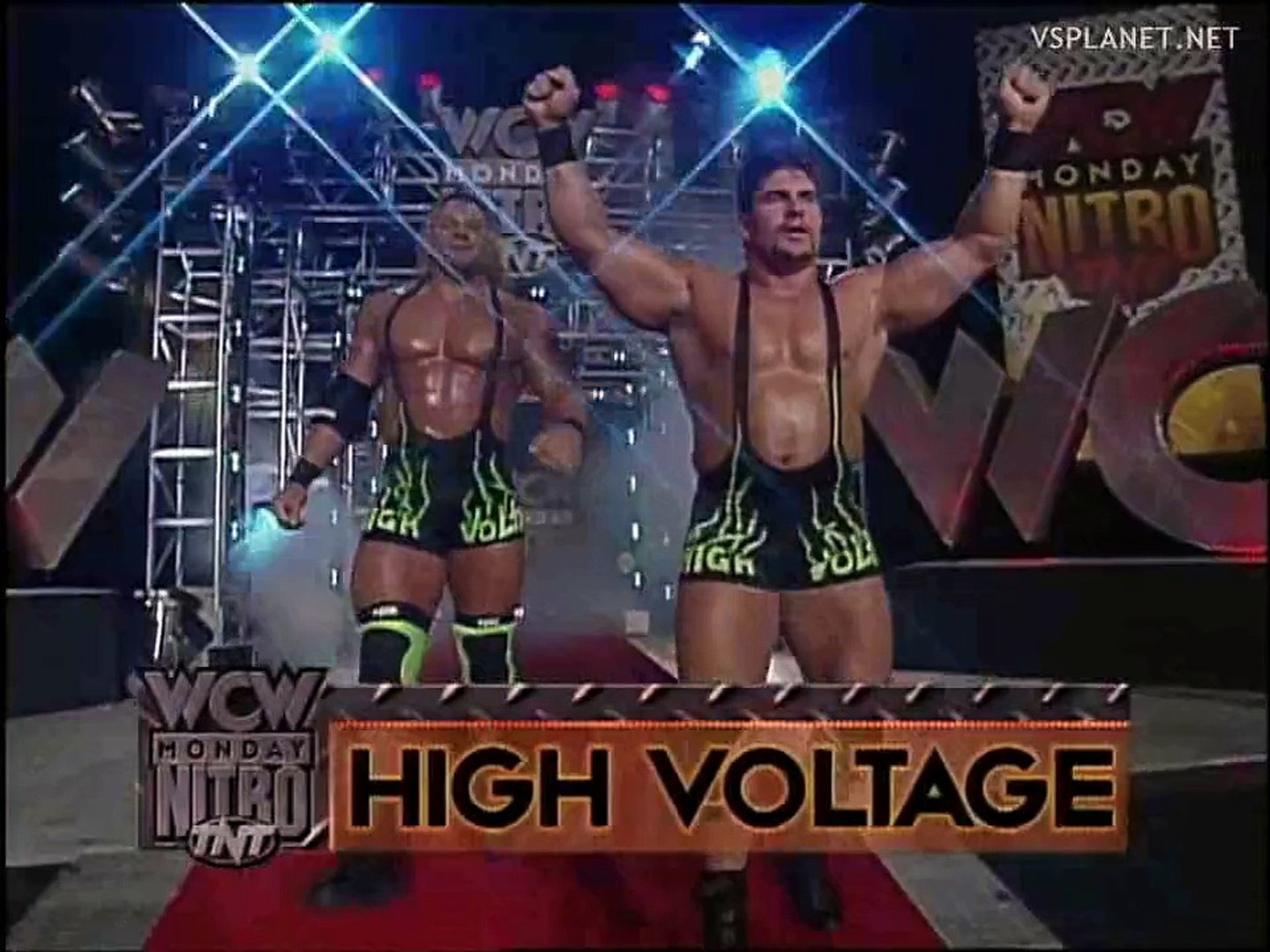 What level of “Wrestling Fandom Shame” is being a High Voltage apologist? I’m asking for a friend.

THE AMERICAN MALES (Marcus Alexander Bagwell & Scotty Riggs) vs. HIGH VOLTAGE (“Ruckus” & Kaos):
(13.07.1996)
* OH F--- YES!! I had no idea these duos were contemporaries. High Voltage were green as grass at this point, wearing neon yellow/green singlets that show off their oily roided-up physiques. Apparently Rage is either “Ruckus” here or Tony got the name wrong. Okay I can see the entire outline of Rage’s penis- dude, wear a cup. The Males are of course Buff Bagwell when they were still trying a “pretty babyface” thing with him. The Males are just SO bush-league, wearing cheesy black trunks with white stripes on the sides and their hilarious “American Males! American Males!” ’80s rock song- it’s such a WWF kind of thing, but done so poorly without any of the proper glitz. A bad copy.

Riggs & Kaos do some basic Power Plant headlock/leapfrog stuff into a dropkick from Riggs. A double-elbow from the Males hits, but he wristlocks Riggs and soon “Ruckus” is being knocked around by Bagwell’s basic stuff. LOL, Bash at the Beach ’96 had just happened, so OF COURSE Tony & Dusty are only going on about the nWo. Ruckus trips Bagwell into Kaos’s elbow, and they do such basic stuff (vertical suplex, bodyslam) before Ruckus misses an elbow and eats a double-dropkick… and that’s it (3:23). Haha, okay, that was fast.

Funny match, as you could tell Voltage were green, but they booked it so tightly (likely planning every move) and kept it so simple that even rookies couldn’t f--- it up, so it was perfectly fine for the time given. Nobody doing stuff they didn’t know how to do, and doing what are probably Power Plant drills every guy knew by rote at that point. The Double-Dropkick was such a lame finish, though.