What could possibly happen in a tag match between Kevin/Adams and Hernandez/Roberts? Plus, a visit from El Diablo Grande! You don’t want to miss this historic episode. Who will join me for it? 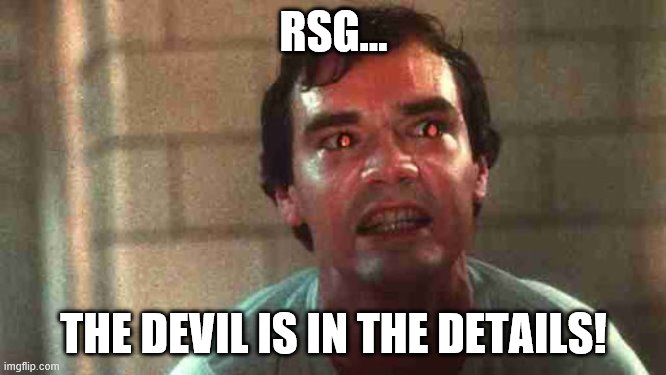 Andrew, your eerie presence must be foreshadowing something none-too-pleasant. After all, you make doves cry!

Summary: Although I wasn’t sure who would win, Diablo took the brunt of the punishment yet escaped with a victory. How devilish! Also, you don’t see the senton splash too often during this era.

Following a commercial break, Marc Lowrance interviews Roberts who can’t wait to get his “first taste of a Von Erich.” YUCK! Hernandez chimes in by contrasting himself with Roberts. While Nickla stands alongside him like a badass, Hernandez puts both Roberts and himself over. He also mentions having an unnamed third partner to chase after the six-man titles. Lastly, he adds a shot at Stella Mae French for Nickla’s sake. 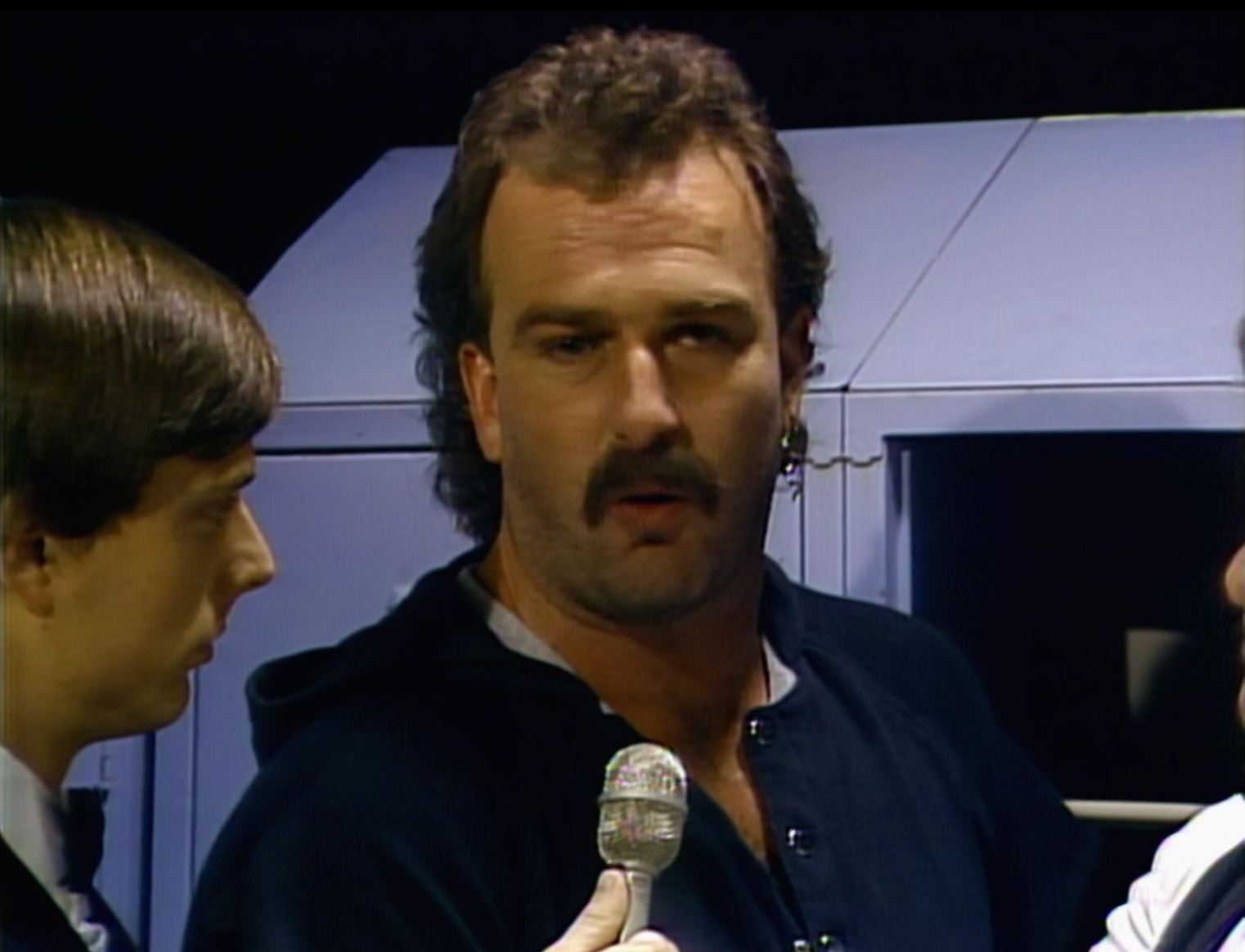 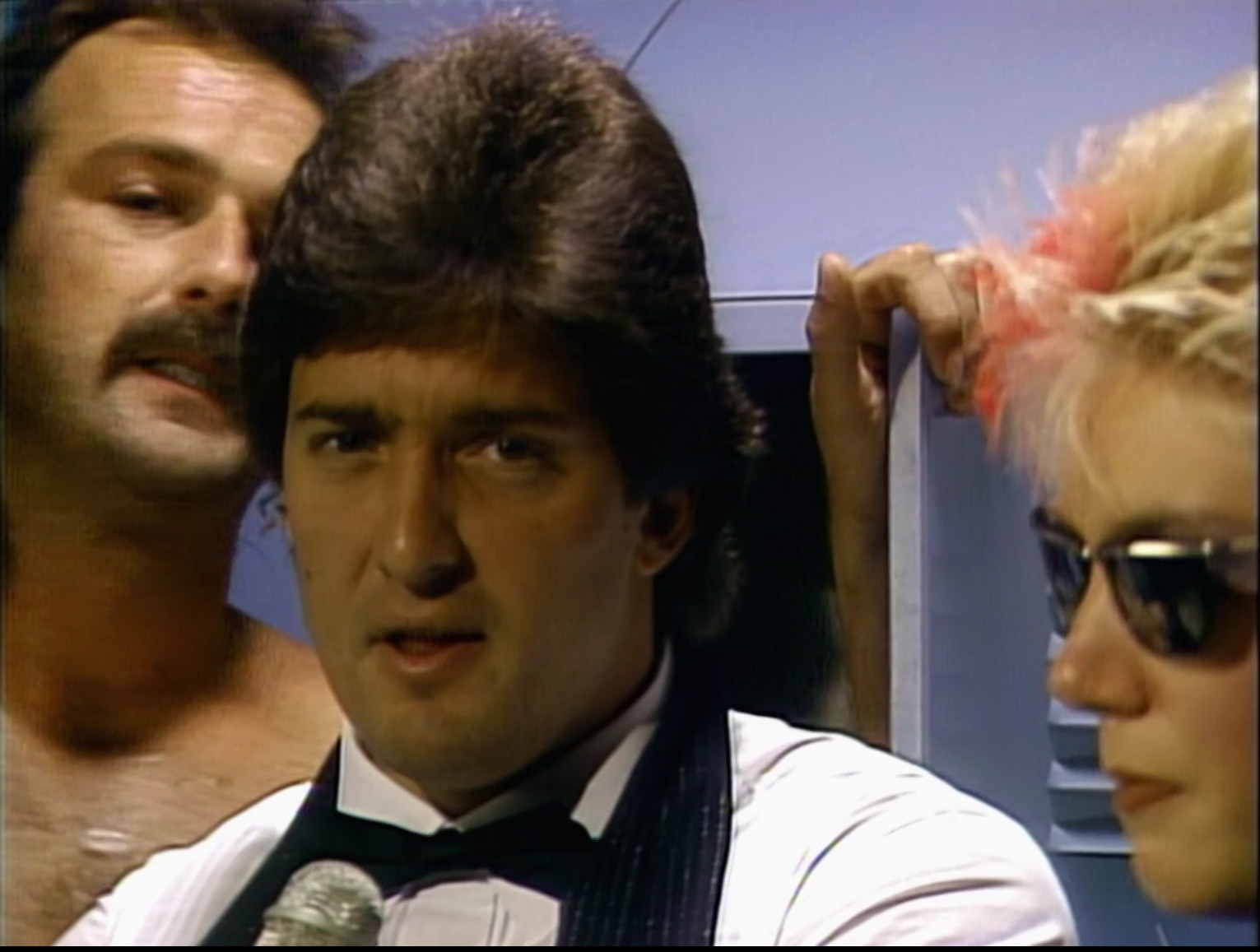 From Adams’ office, Mercer interviews Adams who touts his success while having Hart at his side. Adams also states that French will be in attendance during the main event. When Mercer asks about the future, Adams replies with “the sky’s the limit.” Hmmm…what does he mean and what is he contemplating? 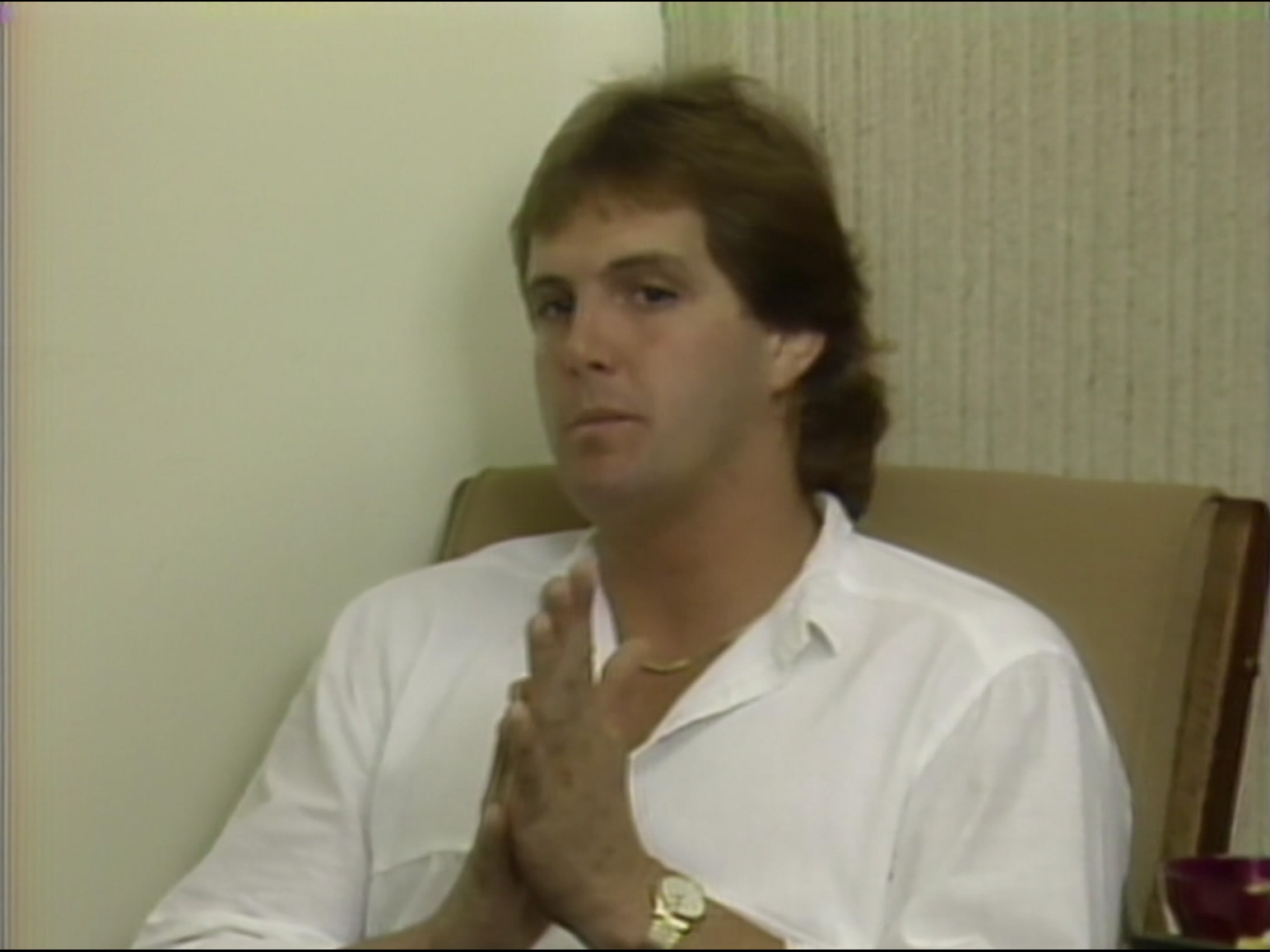 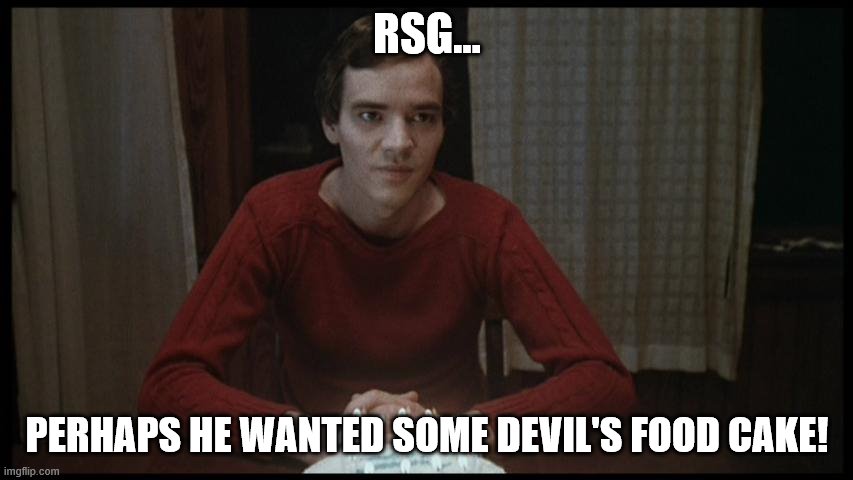 Fiendish reply there, Andrew. I wonder if the silicon chip inside your head got switched to overload.

Omitted from the broadcast thanks to the WWE Network is a video featuring the Missing Link with music allegedly from Quiet Riot. Please send your complaints their way instead of mine.

Summary: That ending came out of nowhere. Upon second glance, Adams kept Hernandez atop him by securing his head. But why?

After the match, French enters the ring, and Adams shoves her twice. That’s peculiar and not gentlemanlike. When Hart puts his hands on French, Kevin stands up for her and nailed Hart. Now HE’S a gentleman! Seeing what happened to his manager, Adams scores with a superkick to Kevin. WE HAVE A HEEL TURN! 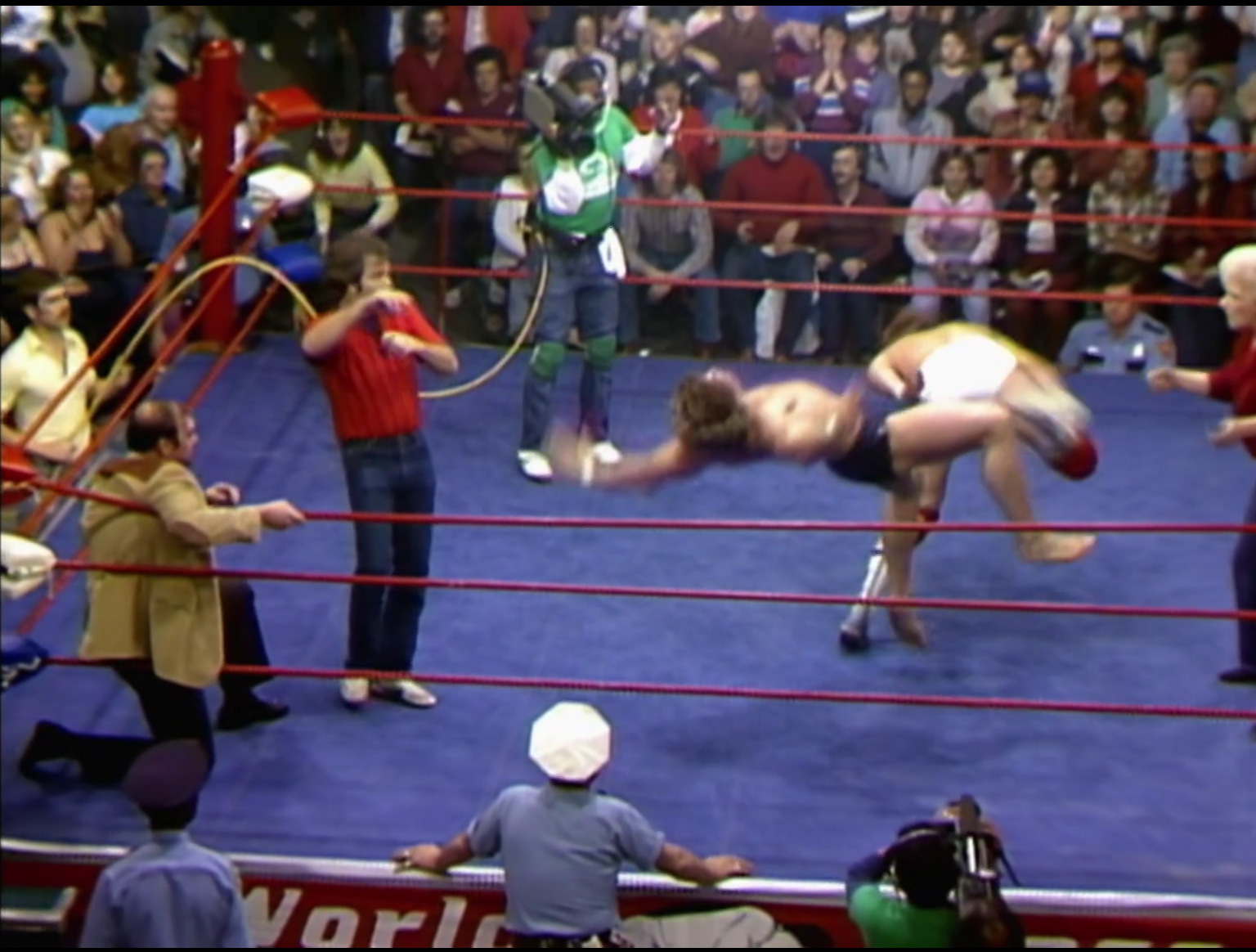 Following that, Hernandez and Roberts return to double-team Kevin. In the meantime, Adams exits the ring leaving Kevin high and dry. Despite Manning’s objections, Roberts delivers a DDT to Kevin. Gino lands a series of elbow drops before Zumhofe and referee Rick Hazzard clear the ring.

To end the show, Mercer interviews Manning who describes the aftermath of the main event.

Conclusion:  Can you believe that no-good slimy Adams? There’s standing up for your manager, but nailing Kevin? That’s a death curse! Seriously, if you’ve never seen the build and climax to Adams’ heel turn, then you owe it yourself to check out the last few episodes—namely this one. Methinks we have a main event for the Cotton Bowl on 10/26. What do you think, Andrew? 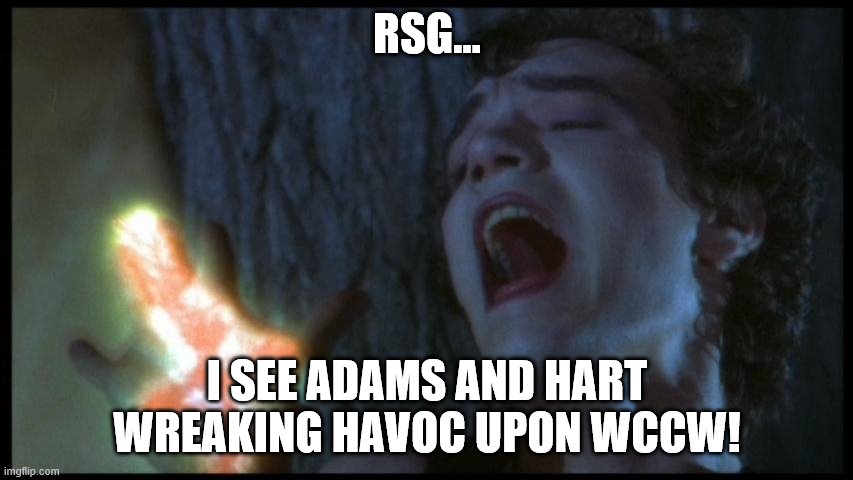