AJW TV (Aug. 14th, 1992):
* The other AJW TV show I saw on YouTube. It features two matches from the Lethal Lottery-style “Fuji TV Network Tag Team Tournament”, plus a huge mismatch in Aja Kong vs. Takako Inoue. Wonderfully, it keeps the ads, though it’s hard to tell what they’re advertising- everything’s got song accompaniment. There’s a commercial for sake, one for a hotel with an onsen in it, and assorted mascot things. Oh, and a tree-trimmer that extends to 1.8 meters! And Lawson, the weirdly-ubiquitous American convenience store chain that exists on every single city block in Japan!

At the end of the show, they show some other match endings. Rie Tamada pins Saemi Numata in a 6-woman tag match after (11:53) before Tomoko Watanabe can break it up, Etsuko Mita beats Bat Yoshinaga with her Straighjacket Perfect Plex at (12:15), and Bull Nakano beats… someone in white with the Guillotine Legdrop in (13:44). Damn, the tape transfer sucks too much for me to tell who that is. They looked thin and had short hair.

FUJI TV NETWORK TAG TEAM TOURNAMENT:
SAKIE HASEGAWA & MARIKO YOSHIDA vs. MANAMI TOYOTA & MIMA SHIMODA:
* Haha, you can tell this is fake drawing because of course the feuding Sakie & Mariko are teamed up on one side, and the former Tokyo Sweethearts are reunited on the other. Shimoda’s in Las Cachorras Orientales by this point, but is still highly subordinate, being the lowest-ranked of her “year” (1987). Yoshida’s in the powder blue, Sakie’s in white, Manami’s in black, and Shimoda’s in her black & pink thing.

The Sweethearts kick some rookie ass to start, with Manami aping Itsuki Yamazaki super-hard with her Flying Armdrag and Walk-Up Armbar Takeover. Shimoda lays waste to both opponents with LCO-style chair-tossing on the outside, which is hilarious with Toyota on her side. Manami doesn’t even help! Sakie comes in to stop the torture, but gets killed by Toyota’s Dropkick Spam. Shimoda stretches both, then Manami kicks Yoshida’s ass, ending with a bridging vertical suplex for two. Sakie FINALLY gets some offense by spamming her Savate Kicks to Shimoda (while screaming, naturally), but Mima immediately dumps her off the top and hits a plancha onto both opponents, followed by Manami’s Walk-Up Asai Moonsault off the top rope! Jesus- this is an ASS-KICKING.

Sakie takes a HORRIFYING bump onto her neck from a Backdrop Superplex- Yoshida has to save her, then attacks Manami trying a Rolling Cradle, but then SHE takes the Rolling Cradle. Moonsault looks to wrap that up, but Manami MISSES, and immediately Yoshida pops up and gives her a Perfect Plex for two. Manami makes her own comeback with a German from a double-lariat, but Mima’s Flying Clothesline hits her while they’re double-teaming. Shimoda Superplexes a bloody-mouthed Yoshida, who barely kicks out at two, but the Joshi Irish Whip of Transitions leads to her running to the corner and hitting a Run-Up Flying Sunset Flip… for the three (13:41, 10:48 aired)!!! Super upset win for the rookies! Shimoda sells it like “They BEAT me? Are you SHITTING me?” while Manami just looks dumbstruck in the corner.

This was two veterans slaughtering two younger wrestlers almost unopposed for the longest time, with only brief comebacks leading to the unexpected win (with the best of one team beating the worst of another- Shimoda is actually lower “ranked” than Yoshida at this point). In that regard, it was pretty fun, especially as it was more of an exhibition with a small, cute “story” than some big-time competitive match. The selling was completely minimal, though- repeatedly, someone dodges a move and immediately hits picture-perfect offense despite taking a horrendous beating for several minutes.

Rating: ***1/4 (fun little jaunt; not much selling, but quick and breezy with a “come from behind” win) 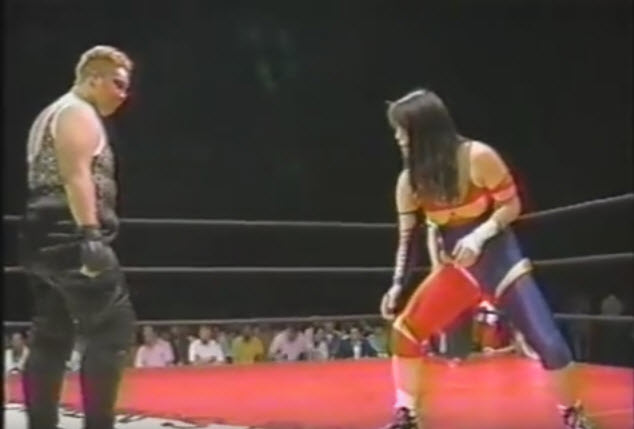 Takako in her rookie gear, preparing to be eaten alive by Aja Kong.

AJA KONG vs. TAKAKO INOUE:
* Uh-oh- this is gonna be a slaughter. Dominant Aja Kong, the up & coming Monster Heel, versus a pre-credibility Takako?

Amazingly, Takako jumps Aja as she’s walking down the aisle, smashing her with a chair and then firing off a dive to the outside! Aja’s so pissed off at the disrespect that she throws the ringside stairs at the crowd! Then when she hits the ring, Takako just outruns her on the outside and runs in celebrating, leaving her out again! A furious Aja now throws a TABLE for this bullshit, then yells at the crowd for chanting for Takako. This is just a temporary reprieve, however, because a theatrical test of strength leads directly to a headbutt and a savage ass-kicking, Takako getting stomped, thrown around, choked and taunted. Then Aja, match in hand, of course decides to cheat anyways, using her metal can (flipping off the booing crowd) to drill the Idol, who moans in pain so loudly it shows up on TV.

Takako manages a brief comeback by doing a bridge-out from a pin and getting an assisted leapfrog over a STANDING Aja in order to do a sunset flip. A second try sees Aja try to sit on her, and Takako grabs the OTHER metal can to use it against the monster! But, like in every other match I’ve seen where that happens, Aja proves immune to her own weapon (great running gag, there), headbutts Takako, and then starts headbutting the turnbuckle while the idol sells. Takako manages another comeback by knocking Aja off the top, but her dive only hits jobbers… and now she’s dead. Aja breaks chairs over her skull, drags her to a table, and PILEDRIVES her through it (in 1992)!

Here’s a gif of that very spot.

Aja drags the corpse into the ring, hits it with a chair, then pins it with the slowest Flying Back Elbow ever at (8:09 shown). I love the extra chairshot there. They coulda done an autopsy right then and there, but Aja has to throw ANOTHER chair at her. It was fun seeing Takako try to get cute and run away to start, playing up her speed, but this was an all-out squash any way you look at it, made fun only by Takako’s quick comebacks. It’s kind of weird that by this time next year, she’d be a major star with a ton more credibility and a couple of big moves. Someone did a mini-article on this very match, oddly: http://prowresblog.blogspot.com/2015/09/ajw-891992-aja-kong-vs-takako-inoue.html

Rating: **1/4 (fun squash, but a squash all the same. Aja still has all her facepaint on at the end!)

FUJI TV NETWORK TAG TEAM TOURNAMENT:
KYOKO INOUE & TERRI POWER vs. AKIRA HOKUTO & TOSHIYO YAMADA:
* Interesting teams yet again, as the rookie gaijin Terri is allied with powerhouse sprinter Kyoko, and they’re fighting the LCO-era Hokuto and one half of the WWWA Tag Champions in Yamada. Four very, VERY different women, with very different careers (Kyoko & Hokuto made the Main Event, but with Kyoko taking longer to do so, but both are legends with a score of ***** matches each; Terri was a failure and then went on to be an early WWF Diva; Yamada’s push and in-ring work mostly flamed out after 1995). Like… three of them have had ***** matches with Manami Toyota. The other probably hasn’t HAD a “best match”. Ever. Kyoko’s in the usual red/yellow tassled gear, Terri’s in black with a white top, Hokuto’s in her black outfit, and Yamada’s now got a blue shirt & pants- I really like this look more than her Hotta-Lite look from later on.

Hokuto & Kyoko do a wicked brawl to start, Kyoko finally doing a slingshot dropkick that is INSANELY slick considering how hard that move would be to do- she literally runs to the ropes, leaps, then spins in mid-leap to allow her to hit the ropes with her feet and then leap off. In one motion. Hokuto dropkick is blocked and she’s Giant Swinged (Swung?). Yamada actually dominates on Terri right away, hitting kicks and her great snap suplex. Terri skins the cat back in after missing a lariat (great “little thing”, as Hokuto spots this and shakes the ropes to try and fuck with the move), but another lariat hits and Kyoko lands the Run-Up Flying Back Elbow. Kyoko gets kicked in the face by both opponents, then splattered with a German gone wrong (Akira was trying a hold, but overshot and All Japan’d her right on the neck). Enzuigiri Spam and Rolling Kick from Yamada get two, but Kyoko turns a whip into the Helicopter Slam. Power adds a Powerslam and a Flying Cross-Body (!!), but Yamada rolls through for two- she’s really working hard to make Terri look good, ensuring they do simple waistlock reversals and stuff.

Power’s other good move, the Frankensteiner, gets two. A good set of reversals see both girls avoid Kyoko’s Niagara Driver, then dump her from the Backsplash, leading to Hokuto’s Tope Con Hilo on both opponents to the outside! Akira adds a Missile Dropkick, then attacks Terri with a singapore cane and they fall outside- Yamada hits a Backdrop Suplex for a close two, then sets up the Flying Enzuigiri… and they probably/sorta fuck that up, because it turns into a Flying Punch, Kyoko does a sloppy Niagara Driver attempt, and Yamada does a sketchy backslide and Dragon Suplex before just doing the Flying Enzuigiri again for the win (10:49 aired), long after Hokuto stopped fighting Terri outside. Odd to see Kyoko job so definitively at this point, but Terri kind of made her eat a bunch of offense.

Amazingly good use of Terri here- apparently the secret with her is to put her in a match with three of the best workers alive and suddenly she doesn’t look so shitty. WEIRD. The pacing was awesome, everyone had their working boots on, and even without putting “Big Match Effort” into things (you could see them not hitting moves with the same intensity), it was fun. The ending was almost CERTAINLY botched, but kinda still worked save the “oh shit, what now?” improvised sloppiness.

Rating: ***1/4 (good match aside from failing to stick the landing)

These TV shows are fun- simple, breezy and easy to review. It’s an interesting look at their version of “working light”, as you can generally tell that nobody has QUITE the same level of intensity as they do for a major show (their equivalent of PPVs- shows that receive tape distribution and big-time matches)- moves aren’t as stiff, they don’t put as much “oomph” into their slams, and you’re going to see more goofiness (Takako running from Aja), squashes, and surprise victories- I can’t imagine Toyota losing a quickie match to rookies at, say, Wrestlemarinepiad ’92 or Wrestling Queendom IV; nor Yamada beating Kyoko after only one finishing move. They came off like they’re still working hard, and if anything the (clipped) matches are much quicker than the “long for the sake of long” matches AJW sometimes does- cutting five minutes means cutting out five minutes of RESTHOLDS sometimes, ya know?