We start with Tommy Dreamer talking about how much ECW means to him and how he’s put fifteen years of his life into this and all the other things he tells the cashier at Wallmart he sees wearing a John Cena shirt underneath their work gear. Out of nowhere, Kozlov (of all people) gives Dreamer the Iron Curtain and challenges Matt Hardy tonight. He leaves via the crowd so Jack Swagger saunters out to give Dreamer the Doctor Bomb because he’s the ALL AMERICAN AMERICAN.

Miz & Morrison won the Slammy Award yesterday for tag team of the year, practically by default. It’s been a while since we’ve seen Jimmy after that cool feud with M & M earlier this year. This is Funaki’s first ECW on Sci-Fi appearance and I don’t remember anything about this gimmick apart from him using the Jimmy Hart version of Everybody Was Kung Fu Fighting for his entrance. Funaki throws a few kicks to show he’s very serious. Todd explains Yang’s gimmick as ”he’s from Georgia, which is in the South.” Wang busts out a standing moonsault but the reaction for Miz & Morrison is more positive than usual. C’mon guys how can you not cheer Team We Definitely Understand Japanese People. Funaki avoids Morrison’s spinning wheel kick to karate kick him out the ring. Miz distracts Funaki as…we go to break. Dammit I was hoping this would be brief. Chinlocks for Funaki as Striker lies and says the crowd is behind him as they cheer Miz’s corner clothesline. Miz & Morrison continue to destroy Funaki until Wang gets the cold tag. His high-flying reminds the crowd he can do cool kicks and flips when he’s not in dark matches. Wang escapes the Starship Pain but misses a top-rope moonsault and gets caught with the springboard kick for the win.

Winners: Miz & Morrison (Despite Wang’s athleticism, this couldn’t compare to previous Wang/MM matches this year because no-one took Funaki seriously and no-one should have. It’s not a good sign when the Uber Dicks are getting cheered over you.)

Tony Atlas shows off his 1983 gear to Mark Henry who doesn’t give a shit about it or Atlas and wants to know why he hasn’t un-packed Henry’s gear yet. Atlas wipes off the Crispin marks off his face and apologies.

Oh apparently Kozlov vs. Matt Hardy is happening at Armageddon this Sunday instead of tonight. Thankfully they realised there was a good chance no-one understood what he was trying to say so Matt Hardy fills in the gaps in a backstage promo. There was a Beat The Clock match on Smackdown and Kozlov couldn’t beat Matt and Kozlov is salty, thanks Matt.

The Boogeyman vs. Scott Reed

Boogey barely gets a reaction and his slow-motion strikes don’t change that. Boogeybomb, chants for ”Reed, Reed, Reed”, worms.

Winner: The Boogeyman (You know when you make coffee in a cafetiere and sometimes you get lazy and re-heat whatever coffee is still there rather than re-filling? Boogeyman’s on his fourth cup.) 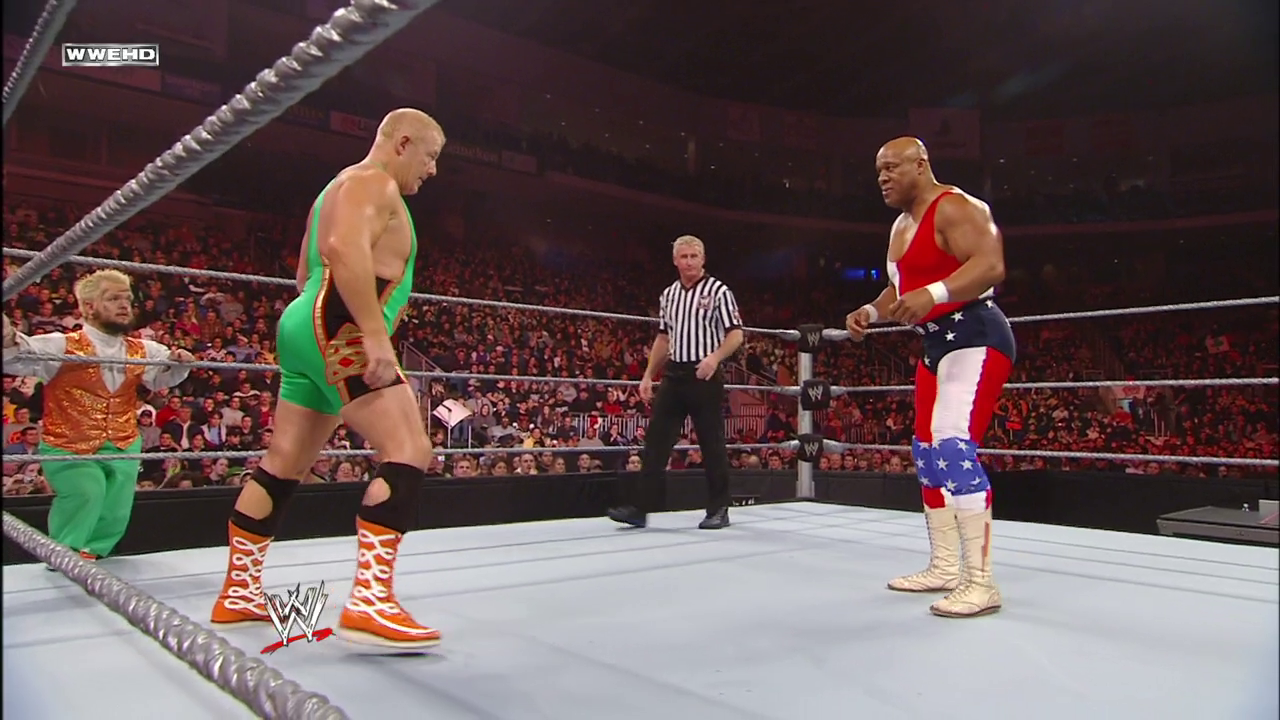 If you haven’t been following this heart-stopper of a feud then to reiterate: Finlay beat Henry a bunch of times via Hornswoggle interfering so Henry wants a tag match so he can keep an eye on both men. Henry is the bad guy in this feud. 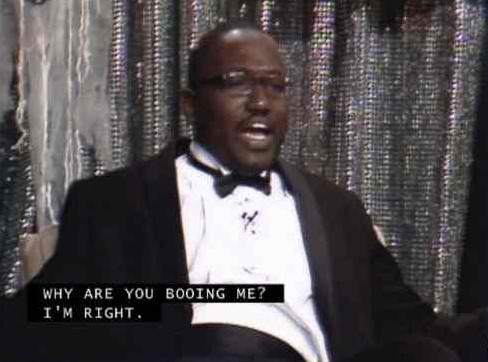 Atlas starts with Finlay and is able to match him for strength despite being 54. Matt Striker explains it’s because he can lift a car. Finlay clotheslines him and he takes it like Big Daddy Yum Yum, causing Henry to knock Finlay out the ring. Henry finally gets his hands on Horny but Finlay is able to pull him out the ring before he can connect with a Vader Bomb. Back from break, Finlay is attempting to punch out Henry but that goes as well as every other time he’s done it and Henry slams him for two. Atlas tags in and his All American Wrestling strikes impress Striker because that’s been his frame of reference for the rest of his career. Henry locks in a neck crank for that authentic ’83 feel. That kills a few minutes until Finlay can get a DDT and enziguri and…immediately gets knocked down by Henry, jesus. So Henry drags Hornswoggle in and SLAMS the shitter.

Finlay saves him from taking a splash but falls to the World’s Strongest Slam to end it.

Might as well look at Armageddon too given how delicately they sellotaped it onto the show. 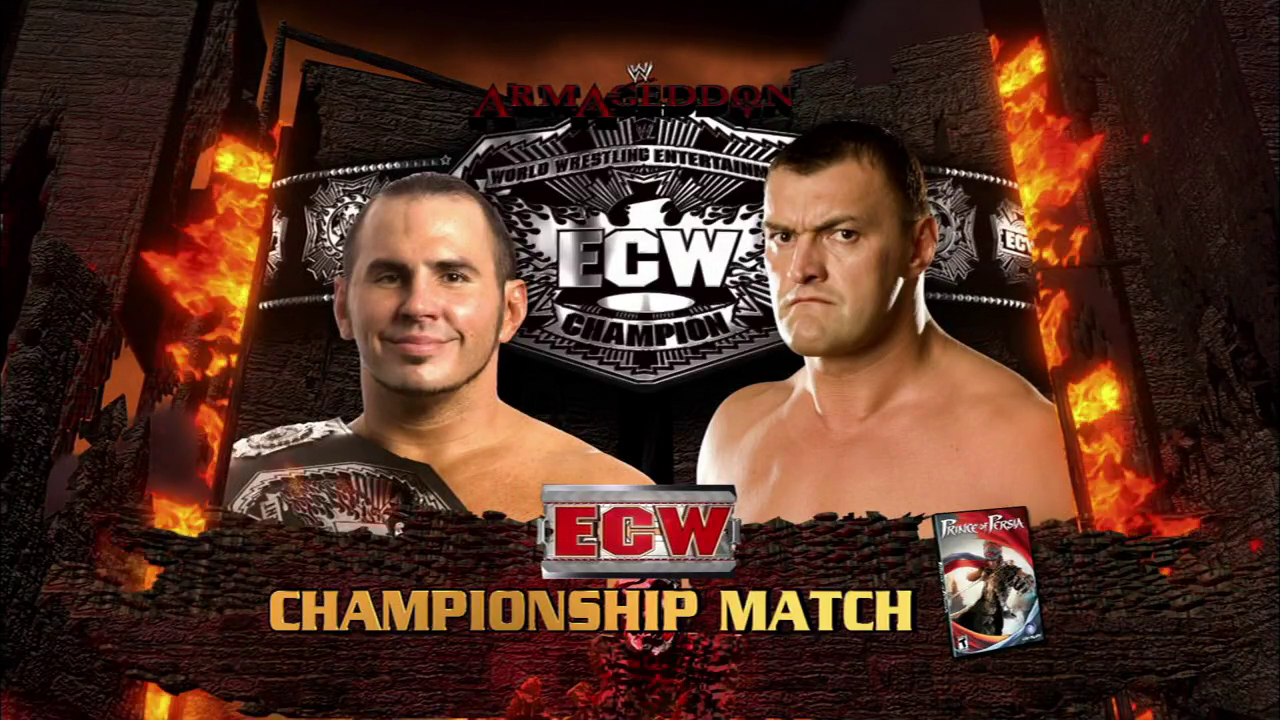 This is opening the PPV which is for the best. Because Kozlov hasn’t had an ECW match yet this isn’t for the title which makes sense but just makes this match all the more confusing. He’d already bombed as a headliner and now he’s being built up? Anyway, Russian Benjamin Button gets out-wrestled by Matt Hardy to begin until he back suplexes Hardy. Kozlov repeatedly hurls Matt into the ring post and works over Matt’s shoulder with headbutts. He applies a key-lock, doesn’t get a submission so he holds onto it and slams Matt for a pin-fall but keeps the key-lock in so when Matt kicks out he tries again.

Where was Cool Offence Kozlov when he was putting the crowd to sleep at Survivor Series? Head-butts to the chest (like Al Snow used to do) gets two. Kozlov keeps Matt grounded and when he tries to get up he DDTs him. I was ready to shit all over Kozlov given how thrown-together this match is but he’s making it tough for me. Hardy escapes by using the ropes and ejects Kozlov to the outside and into the ring post. When he enters, Hardy plants him with a Side Effect but Kozlov grabs the ropes. Kozlov counters another top rope move with a palm strike for two and crowd was ready for that as the finish. Hardy tries for the ten punches but Kozlov launches him and he lands on top of the ring post to a ”ooohh shiiit” reaction, leaving him open for The Iron Curtain.

Winner: Vladimir Kozlov (Well either Matt Hardy had his miracle worker boots on or Kozlov was waayyy better than I remembered. In fairness, all I recall from his 2008 run was him being a generically generic COLD WAR MIRACLE ON ICE ROCKY IV guy we were supposed to buy as the next Snitsky. Here he showed off his cool-arse grappling and had to earn a victory against Matt which is always more impressive than slo-mo grappling with HHH. We’ll see more of him next year with Regal so we’ll see if it’s appropriate to give him Kozlove or if I’m just hungover.)

Shocking levels of non-hype and organisation for this match that I wouldn’t have known about unless I’d read the wikipedia article for the show but it’s hardly surprising for the ”oh shit there’s a PPV in December!” levels of interest there usually is. Finlay immediately pounds away on Henry but Mark swings him into the guard-rail like a boss. After sweeping his legs on the apron, Henry misses a splash so Finlay gets weapons. Atlas twats him with a bin lid allowing Henry to knock him into a trash can as the hard camera crowd does the Mexican Wave. Henry splats Fit while he’s resting on the ropes but Fin recovers to go nuts with a bin for a bit. Finlay goes for the Now Watch Me Rock Now Watch Me Shillelagh but Henry blocks with a big boot and snaps it in half. Well done finally doing that in a match with OTHER WEAPONS involved and sure enough he turns around to take a Singapore cane. Which he then breaks, ignore me. ”Bears can’t break those!” Little Horny tries to interfere but Atlas sorts him out and Henry uses a bin to squash Finlay in the corner. Henry tries to kill Finlay with the ring steps but he lands a low dropkick and gets Shillelagh #2 from Horny and crunches Henry for the win.

Winner: Finlay (This was spirited and full of weapon-based twattery but the whole feud has been based on Henry accusing Finlay of not being able to beat him unless he uses his stick and their big PPV match was ended with Finlay using his stick.)

Overall: Steaming episode of ECW on Sci-Fi but a typically great Matt Hardy match at Armageddon. December is usually a mess anyway but ECW being treated like the youngest kid in a large family and getting whatever scraps are left over and having to love it is visible here. Funaki, Atlas, Boogeyman and Kozlov? Yeah OK.

I’ve been Maffew, follow me on Twitter and watch me on Cultaholic (here and here) and remember to drink lots of water.