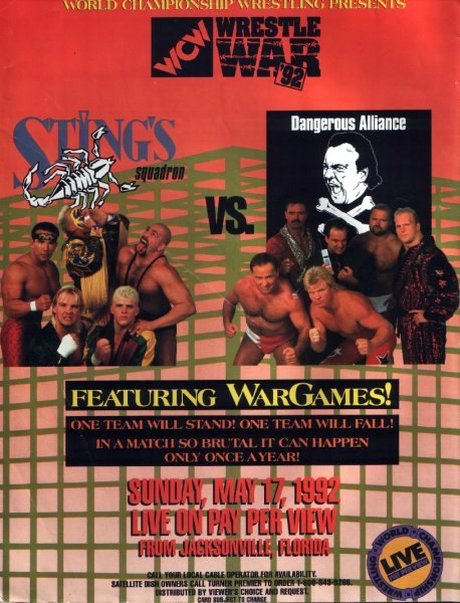 Who will win WarGames? Sting’s Squadron or the Dangerous Alliance? Can Z-Man beat his former tag team partner for the light heavyweight title? Who is this mysterious Super Invader? Let’s find out!

Match 1 for the WCW US tag team titles: The “Taylor Made Man” & Greg “The Hammer” Valentine (champions) versus the Freebirds

Summary:  Solid opener that riled up the crowd. The Freebirds are now two-time US tag team champions.

Summary:  Smothers wasn’t the type of heel that Badd needed to get over. The Young Pistols have split up, because Steve Armstrong embarked upon a short stint in the WWF.

Backstage, Missy Hyatt interviews the NEW US tag champs with the reappearance of Precious. Hayes then dedicates the Freebirds’ victory to Ronnie Van Zant of Jacksonville’s own Lynyrd Skynyrd. 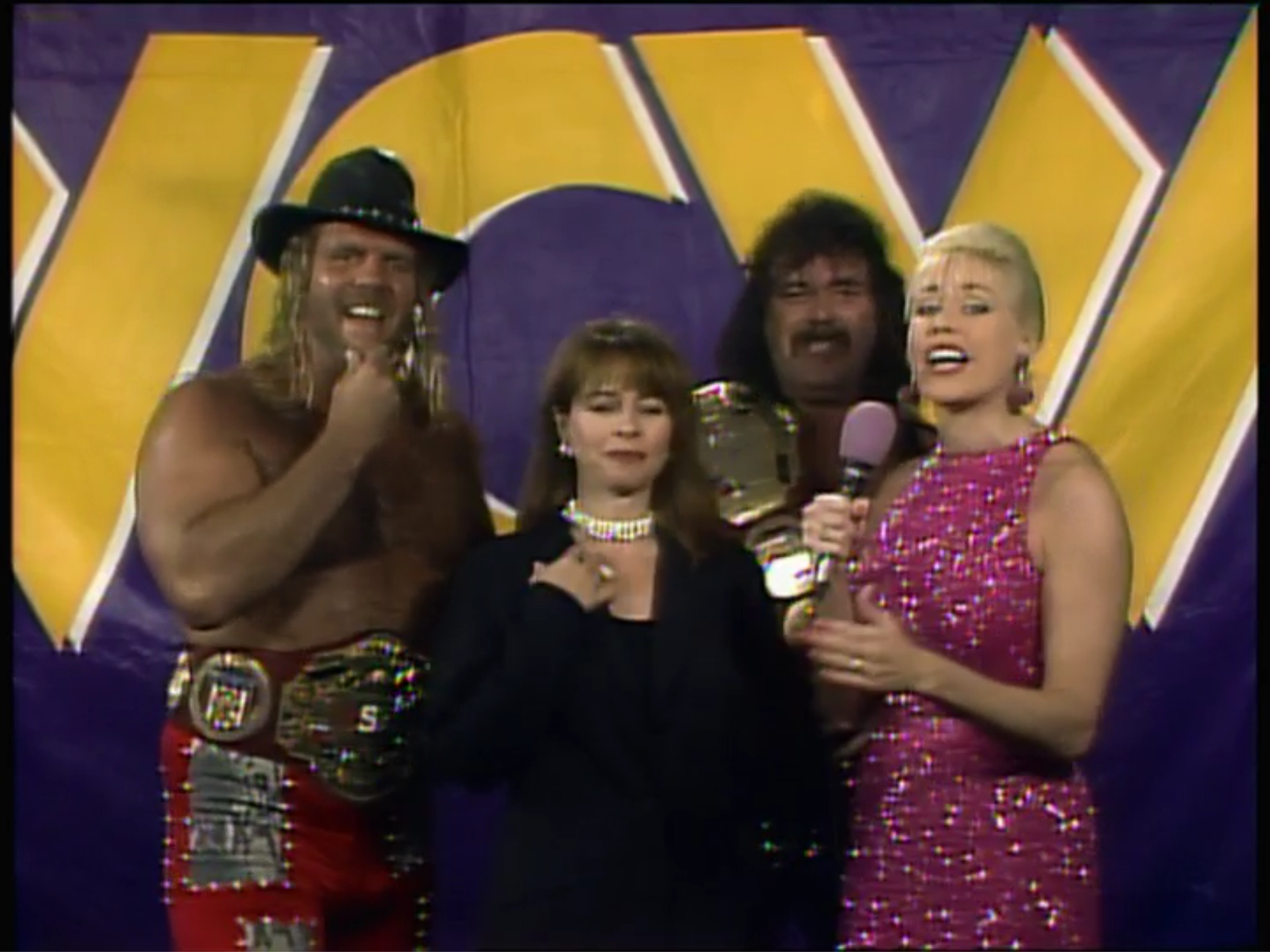 Summary:  Although Flamingo had more experience, the match lacked intensity, and the Jacksonville faithful didn’t react to it whatsoever.

Promo for Beach Blast airs. It will be LIVE on PPV on 6/20. If you didn’t order within the previous five minutes, order NOW!

Ross and Ventura discuss the upcoming tag match. We then revisit SuperBrawl II when JYD saved Simmons’ bacon by chasing off Cactus Jack and Abdullah the Butcher.

Summary:  Not exactly sure why JYD didn’t wrestle, but he no-showed Savannah three nights earlier so this may have been his punishment. As it is, the Simmons push continues.

Summary:  Showcase match for Super Invader. Are you like me and find it peculiar that he used the same maneuver that he no-sold for Sid in his last WWF match (aired 3/23, taped 2/23)?

Summary:  This was Bourne’s final WCW supershow appearance. I wonder when and where he’ll next appear.

We then revisit World Championship Wrestling when Z-Man cut a promo on JT Southern and Scotty Flamingo. When he mentioned “putting a title on the line,” Pillman questioned him about it and wanted a piece of Z-Man.

Summary:  Fantastic match between two babyfaces. The near-falls created drama that pulled the Jacksonville faithful into the match. Also, each wrestler’s use of psychology told an excellent story.

Promo #2 airs for Beach Blast. Have you ordered yet? What are you waiting for?

Summary:  Superb match that showcased all four wrestlers well. Iizuka truly impressed me after getting potatoed earlier in the match. According to Meltzer, Iizuka only suffered some facial swelling afterward.

Summary:  The best WarGames match EVER. There was excitement from bell to bell with five of the ten wrestlers bleeding.

After the match, Uncle Paul enters the cage and berates Zbyszko for costing the Dangerous Alliance the match. I smell . 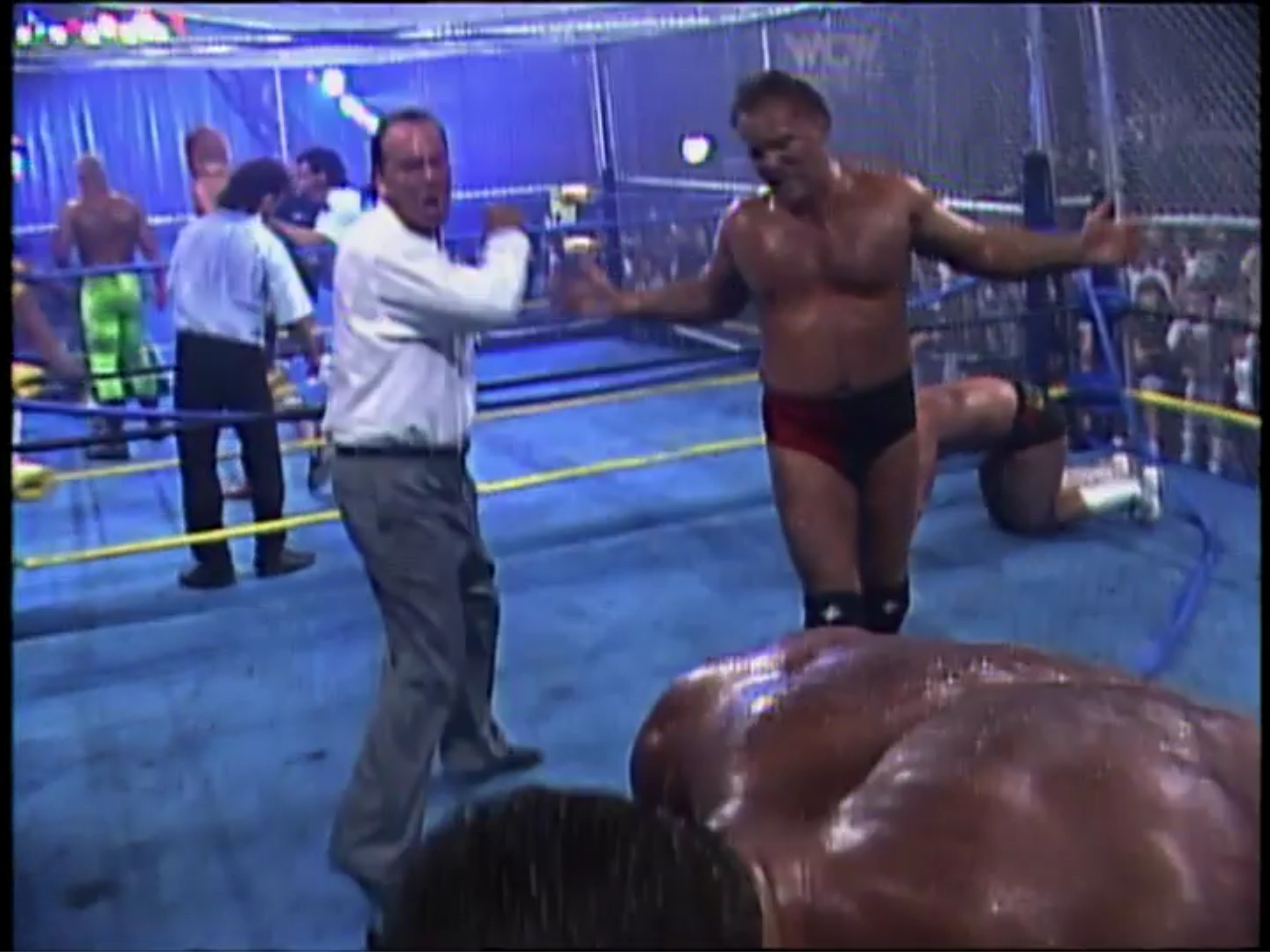 Conclusion:  With the WarGames, Steiners, and Pillman matches, this show is a no-brainer to recommend. With the midcard in a state of flux, I wonder how WCW will juggle its lineup for the next PPV.

**BREAKING NEWS** Rather than working on a per-night basis for $300 with zero guaranteed dates, Diamond Studd (Scott Hall) quit WCW. Hmmm…I wonder where this bad guy, er, heel will end up next.