John Morrison & The Miz vs. The Major Bros.
We’re in Florence, SC the home of *googles* well anyway this is the return of The Majors to ECW after starting here earlier this year before getting drafted to Smackdown in a very curious decision considering how green they were. We get an old-school windowed promo from them being bro-y and calling Morrison a Dude Magnet. Well yeah, you’ve never heard the expression It Ain’t Gay If It’s John Morrison? Majors start with a double arm-drag and a quick roll-up from Curt Hawkins Major who dropkicks Miz outside and follows with a crossbody. Then Zack Ryder Major cuts off John Morrison with a tope over the ropes. Well they look more impressive than last time they were here. M & M recover to plant CHM with a double-team face-first slam and many knees to the face. Crowd is reacting more for M & M’s cool-looking double-teams than whatever The Majors have going for them. Matching trunks? Curt gets beat up some more before landing on his feet on a double-team backdrop and tagging in Zack who cleans house, with Morrison taking a back body drop like he’s on the moon. Ryder nails the Rough Ryder and the commentators have no clue what to call it. Miz makes the save but gets sent outside by Curt. This lets Zack get a schoolboy for a close two before Morrison plants Ryder on the ropes with a Stun Gun and ends with the Corkscrew Neckbreaker.

Winners: John Morrison & The Miz (The match was fast-paced and had plenty of action which is a great formula for the fans. However, this worked well when Mizorrison were wrestling Jesse & Festus because they’re liked by the crowd, it wasn’t as effective this time as The Major Bros. were still nobodies despite switching brands.)

CM Punk is interviewed backstage looking like the cutest ECW Champion ever. Punk doesn’t care to pick who he faces tonight as it’s lose/lose for him so he let’s Estrada or Striker choose. Hey remember Estrada?

This episode of ECW on Sci-Fi is being shown on a Thursday for some reason so they’ve taken the time to fill Kelly’s entrance with as much fake noise as they could find lying around the place. No I don’t know why Kenny & Victoria are teaming up and neither do the commentators as they instead wonder if Balls has ever eaten a spider. Kenny gets nowhere with Balls so he tags out to Victoria while Balls admonishes him. Victoria tries to attack Balls but sadly he turns heel on life and tags in Kelly. She can’t even bounce off the ropes convincingly and nearly splats Victoria on the Twilt-a-whirl.

Kelly slaps Kenny because he mouths off so Victoria spears and stretches her. The Fake-Crowd-Noise-O-Matic suddenly kicks in and we get a loud KELLY KELLY chant despite the cameras showing no-one in the crowd joining in. Victoria keeps the strait-jacket hold on for a while until the crowd actually starts chanting for her thanks to Balls at ringside hyping them on and they realise this match could last forever if they don’t start chanting. Balls punches Kenny a bunch until Victoria tags in and Kelly spikes her on her head with a Frankensteiner (called a ”reverse Victory Roll” by Joey Styles in a moment of madness) and Balls pins Kenny with a Small Package.

Winners: Kelly Kelly & Balls Mahoney (F------ hell. Kelly is a staggeringly limited wrestler who should absolutely not be in these types of matches and yet here we are, two matches in two weeks having every flaw of hers exposed with pumped-in crowd noise.)

Shelton Benjamin gets the mic as the show continues to stagnant. He talks about promises being broken but he’s not like that because he works hard and is a go-getter and also the Gold Standard and there AIN’T NO STOPPING ME NOOOWWWWWW. So they team him with Burke and have Benjamin talk? Burke’s best quality is his promo-delivery! Everyone’s mis-cast on this show, it’s like Bram Stroker’s Dracula and every wrestler is Keanu Reeves.

Wang Yang arm-drags Shelton and excites the crowd by pretending to lasso him. After a quick crucifix attempt, Shelton Yakuza Kicks Wang and nails him with a Sting-Killer running powerbomb into the corner. Wang gets worked over as the crowd die on their arse. Wang tries a crossbody off the top but Shelton turns it into a lungblower and ends with the Paydirt.

Winner: Shelton Benjamin (These Shelton squashes are getting better as he’s doing more cool-looking moves but this was still all over the place. Nice to see the running powerbomb in the corner was a transitional move in 2007 too, despite looking like death. The crossbody counter deserves a GIF though.)

At Armageddon 2007 we currently have Batista vs. Edge vs. Undertaker, Mr. Kennedy vs. Shawn Michaels (which Kennedy won, holy s---. EDIT: no he didn’t dumb-ass.), Triple H vs. Jeff Hardy (AW YEAH, loved that series) and Randy Orton vs. Chris Jericho (which gave us the return of JBL to completely de-rail Jericho’s comeback).

Oh wow, they made Thorn look even more generic than his previous re-do. He beats the hell out of Lewis as expected but this is Thorn’s last ever match so I’m not doing play-by-play. Thorn the vampire had been with the re-birth of ECW since nearly the start but only seemed to exist to please the Sci-Fi executives. People remember the gimmick but not really anything he did as despite endless jobber matches, knocking out Balls Mahoney’s teeth, being part of the New Breed, the feud with Stevie Richards and his cool Original Sin finisher, people mostly remember his valet’s big fake titties. Didn’t help ECW went through multiple different creative teams during the 2006-2007 times so to be honest, he did well to last as long as he did. I’ll give him credit for the Stevie feud and being part of the entertaining Championship Chase series but I can’t say he’ll be missed. Meanwhile companies like AIW are keen on booking him as Mordecai.

Thorn finishes with the backbreaker (his other cool move) to end the match and his appearances on TV.

Winner: Kevin Thorn (Ah he’s a vampire so he’ll be back somehow.)

Striker and his crew march to the ring and Striker decides to flip a coin to decide who Punk will wrestle. After all that build. Tails, it’s Mark Henry.

Punk kicks Henry and Mark shouts ”THAT ALL YOU GOT?” and slams him. Punk kicks him some more and tries the Jeff Jarrett sleeper-hold-on the-back. Henry steps over the top rope with Punk still attached and rams him into the ring-post. OH THAT WAS COOL AS F---.

Henry clubs away on Punk and cuts off a comeback attempt. Commentators gush over how big Henry is and how TV doesn’t do him justice. Well don’t worry we’re getting widescreen in a few weeks. More pounding continues as the crowd chants for Punk until Henry misses a charge in the corner so Punk can nail the Running Clothesline. Before he can land the Bulldog, Big Daddy V runs in for the DQ.

Winner via DQ: CM Punk (Good chemistry here as Punk had no issues being slammed and beaten up as it was part of his formula. So Henry gets to look strong and Punk gets to be cheered. Win/win.)

Both men take in terms slamming Punk until Kane shows up swinging a chair until Striker’s guys are left staring angrily in the aisle. 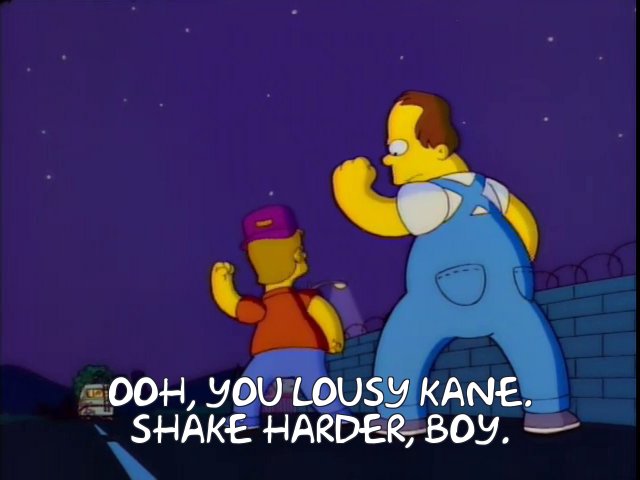 Overall: Not an amazing episode as ECW continues to be a dumping ground for Smackdown’s jobbers. If there was anything in the talent exchange other than RATINGS ARE DOWN, QUICK GET KANE it would mean something but right now they’re replacing Kevin Thorn with Kenny. All is forgiven crappy vampire, come back!

I’ve been Maffew and I have a website. Don’t bother clicking anything, new Botchamania hasn’t been uploaded yet.