And now, more importantly than any news item in this week’s Observer (and there’s some BIG ones!), it’s finally time for the meme that I have been waiting for MONTHS to work in somewhere.

You’ll know it when you see it.

– The top story of the week (and one of the biggest of the year, as it turned out) revolves around Sid Vicious and Arn Anderson getting into a “vicious hotel street fight” while on tour of England.  As a result, Sid and Arn are both facing uncertainty about their future with the company, and the company itself is under attack for their hypocritical decision making, which led up to the incident.   (WCW?  Hypocritical?)

– The brawl took place at 2am on 10/26, at the Moat House Hotel in Blackburn, Lancashire.  (I wonder if Sid stabbed 4000 holes in Arn there and then had to count them all, despite the fact that the holes were rather small?) 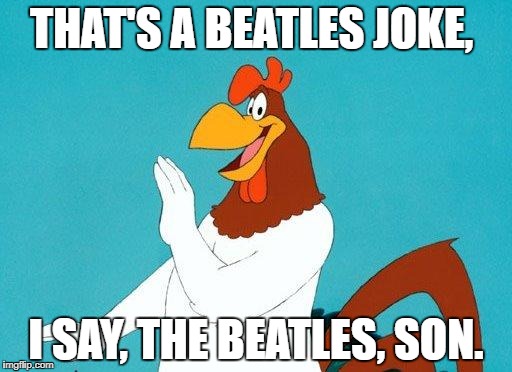 – So to set the stage here, everyone had just done a show in Cardiff, Wales, and then took a lengthy plane ride to England and three hour bus ride to the hotel and people were cranky about it. People were hanging out at the hotel bar, and Sid started bragging about how he managed to hold up the company for a huge raise in exchange for doing the job to Sting at the Havoc PPV.  (Sting was bulletproof and Sid was in line for the World title at Starrcade – why was it worth an extra $600,000 a year to have Sid lose?  Just put him over and do all your stupid b------- with Parker later!)  Meanwhile, Arn had just received a major pay cut earlier in the year thanks to the Bill Watts regime and the insanely cheap contracts that came with it, and Sid was ribbing him about it.  Sid began yelling about Arn and especially Flair were old and washed up and needed to stop aside for him.  Arn naturally got in Sid’s face, and Sid was like… 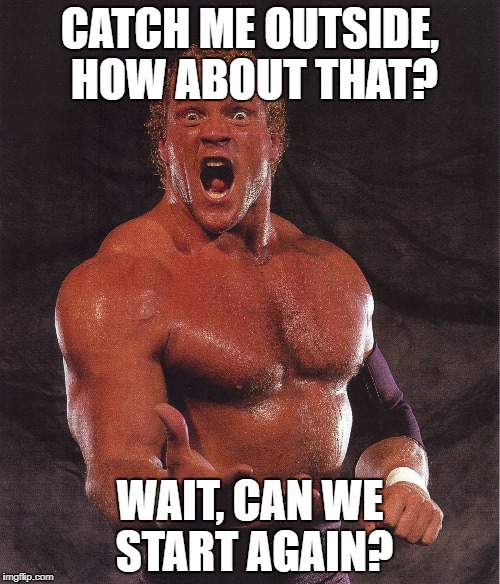 – Anyway, Sid quickly backed down when Arn was game to step outside, and officials stepped in and split them up.  So they both went back to their hotel rooms and now the stories diverge.

Story #1:  Arn went back to his hotel room and locked the door, but Sid grabbed a piece of chair from his room and kicked down Arn’s door, and when Arn stuck his head out to investigate, he got knocked out by a swing from the weapon.  When Arn woke up, Sid was on top of him and beating him into a pulp, at which point Arn managed to get loose and somehow grabbed a pair of safety scissors, stabbing Sid in the stomach to save himself.

Story #2:  Sid knocked on Arn’s door because he wanted to make peace about the bar incident, but Arn attacked him with scissors and chased him around the room, prompting Sid to defend himself with the chair.  Sid went into the hall to get away, but Arn jumped him with the scissors and attacked him again, stabbing him at least three more times.

At this point, the stories converge again as Sid somehow wrestles the scissors away from Arn and then proceeds to stab him TWENTY TIMES, including one that was an inch away from the eye, resulting in Arn being covered in blood from head to toe before Scorpio made the real life save.  It likely saved Arn’s life because Sid was on the verge of finishing him off.

– Sid claimed that he blacked out after being on top of Arn and couldn’t remember anything.  At some point a window was shattered in the fight, and WCW had to make a rather large payoff to the hotel to settle everything, including costs of cleaning all the blood and glass.

– Both men went to the hospital and Sid was returned home after a week, but Arn was in a much weakened state due to blood loss and had to stay longer. Arn was lucky on three counts:

1.  Had Scorpio not intervened, he would have died of blood loss.

2.  Had the scissors been normal sharp-edged ones instead of safety scissors, he would have been dead.

3.  Had the scissors been an inch in either direction on his face, he would have been blinded.

– Shockingly, no charges were pressed on either side because they’d have to remain in the country for 90 days to follow through with the case, and similarly the police didn’t file charges because they just wanted them out of the country.  (I guess the justice system is messed up everywhere you go.)

– As for the media, most outlets just chalked it up to being an angle, and identified both men as “WWF wrestlers” who were attacked by a third party.  WCW’s head of PR (That’s a job with about as much security as being White House Press Secretary these days!) basically called the incident the result of real emotions from wrestling matches carrying over, because what they do in the ring is real.

– Missy Hyatt actually claimed on her hotline that Sid had been fired over the incident, although that’s jumping the gun.

– Early word is that Sid is likely going to be fired and Arn retained, although WCW officials were given word to erase both men from pre-taped shows ASAP.  They’re already switching to the backup plan for Starrcade, which is Ric Flair challenging for the title, although Flair was the actually the backup-backup plan.  Originally they had a “wrestler from the outside” set to challenge Vader, although Dave doesn’t know who it is.  The deal fell apart quickly anyway.  (That’s gotta be Ultimate Warrior, isn’t it?  I mean, who else would fit?  I wonder if we ever find out?)

– So this of course fucks up all kinds of s---.  Roma was supposed to turn heel on Arn, leading to a match at Starrcade, but that’s out the window now. Sid was supposed to beat Vader to win the WCW title and then beat Rude to unify the belts as the focal point of the entire company.  Which leads Dave to his next rant…

– STEROIDS.  The term “roid rage” has been thrown out with regard to this incident, like a LOT, although Dave still isn’t convinced that it’s even a legitimate condition. (That of course was also the buzzword in 2007 when the Benoit stuff went down, although it was quickly replaced by CTE as the main culprit.)  Anyway, Dave thinks that if it IS roid rage, then you can’t entirely blame Sid Eudy, but you have to point the finger of shame at WCW management for letting him maintain that “natural” physique without ever holding him accountable.

– Also, Dave points out, Sid held up the company for more money before doing the job to Sting at Halloween Havoc 90, and then when Scott Norton tried the same s---, he got fired immediately while Sid got a bonus and bigger push.  And then he walked out on the company with a valid contract because he was offered the Wrestlemania main event against Hogan, leaving One Man Gang to do his stretcher job for him.  Because rules of mere mortals don’t apply to Sid.  And yet WCW booked that stupid finish and let him out of his contract, so they’re as much at fault for creating him.  But now it’s time to fire him, end of story.

– Speaking of steroids, Newsday ran a front page story about the WWF and their troubles with steroids, which is the last thing that Vince McMahon wants at the moment. There was no real story, other than federal investigators looking at Vince for SOMETHING which might involve Vince dispensing drugs illegally.  Jerry McDevitt is again accusing an unnamed federal agent of leaking FAKE NEWS to NBC and the papers in an effort to smear the good name of Vincent Kennedy McMahon.

– More details emerging on the Terry Gordy situation with All Japan, as it’s now coming out that Gordy was actually in a coma after passing out on the plane and he’s gonna be out for a while longer than initially reported.  Newest estimates place his return sometime in January.

– FMW’s firing of Tiger Jeet Singh got a bit more petty when they repackaged 61 year old opening match jobber Chin into “Tiger Jeet Chin”, revealing him to be Singh’s long-lost father, complete with sabre.  Or it might just be a Halloween gag, either way.

– WING Kanemura set new standards for stupidity in a tag match against Gedo & Jado on Halloween, taking a powerbomb to end a death match after Jado had literally poured gasoline on the mat and set it on fire. It only drew 650 fans.

– Followup on the UWFI PPV:  The 0.5 buyrate reported appears to be a very optimistic fabrication on their part.

– In Dallas, Dick Murdoch decided to mess with John Hawk on the 10/31 Big D show, double-crossing him by calling for a bearhug and then not letting Hawk release the hold for a full seven minutes.  Then, when it came time for the finish where Hawk was supposed to win with a figure-four, Murdoch reversed into a small package and legit held his shoulders down until the ref had no choice but to count three.  (We’re learning SO MUCH about the psychological traumas suffered by JBL early in his career in these things!)

– AAA FINALLY found the right judge to bribe in Mexico, as one of them reviewed the footage from TripleMania and ruled that Konnan be allowed to wrestle again, which is good because the big return show was supposed to be 11/5 so it was coming down to the wire.

– To the WWF, where the Bret v. Lawler feud is reportedly carrying ticket sales every night.  Meanwhile the other tour with Undertaker v. Yokozuna on top is drawing flies, with crowds in the 800-1000 range, resulting in several of the “B” shows getting cancelled due to poor advances.  In particular, the Lex Luger v. Ludvig Borga feud is a major, major flop, with fingers pointing squarely at Lex.

– The Steiners are back on the road again, although it turns out that Rick was the one suspended, and not Scott. Regardless, the WWF denied everything anyway.

– Mabel sat on Steven Dunn of Well Dunn and injured him, putting Dunn on the shelf.  (And after that, Well Dunn was, well, done.  Nah, I’m kidding, they stuck around for another couple of years, but it’ll take forever to get there and I wanted to use that joke now because what are the chances we talk about Well Dunn again anytime soon?)

– For those keeping track, BattleBowl currently has 250 tickets sold in a 9000 seat arena.

– DDP will be back right away.

– And finally, Eric Bischoff went to AAA looking to broker a talent exchange deal, but Antonio Pena turned him down cold, since how could WCW offer any benefit to AAA when they can’t even run their own shows properly?  In fact, one of the main business owners of AAA called Bob Dhue and said they’d never do business with WCW as long as Eric Bischoff was in charge.  (I think what he MEANT to say was…never say never.)