We’re in Cincinnati, Ohio and last week Punk won a Fatal Four Way to earn a shot at John Morrison’s title. I’m in a rush so let’s get to it.

The Boogeyman vs. Matt Striker

Striker returning to wrestling but still brings Big Daddy V with him. Striker gets bounced around for a bit until he does a runner outside and Big Daddy V clothslines Boogeyman for the DQ.

Winner via DQ: The Boogeyman (Who cares about the match, V squishes Boogeyman with a Samoan Drop on the outside.)

Taz: ”That’s like a small building falling on top of ya!”

Armando is sick of Punk getting title matches so tonight it’s his last title shot. He wishes Punk good luck but Punk tells him luck is for losers. Well, you have lost the last few title matches mate.

Balls Mahoney vs. The Miz

Clips of Balls being on Who Wants To Be A Superhero which looks every bit as thrilling as this Kelly Kelly storyline. Balls punches away on Miz as the crowd continues to react strongly for Mahoney. Miz strikes Balls and Styles gets a classy ”that’ll loosen a tooth!” and Balls side suplexes Miz while Kelly golf claps. Miz recovers to give Balls the Reality Check out of nowhere for the anticlimatic win.

Winner: The Miz (Nothing match as a background to this barmy storyline but at least it was better than their botch-fest from a few weeks ago. Crowd is enjoying this at least.)

Kelly checks on Balls again but the rest of Miz’s crew pulls her away.

Morrison gets a pre-taped promo. ”I look like a champ. You look like a Blink 182 groupie who cried himself to sleep because he couldn’t get backstage.”

Clips from Raw. Linda contemplates divorcing Vince after he brought out a barrage of women he slept with while trying to find his Bastard Son. Vince accepts this and humbly gets on his knees to apologise to Linda…until Kennedy showed up to claim he’s Vince’s son. Kennedy would use the momentum from this hot angle to become a multi-time world champ and headline Wrestlemania to- oh no wait a lawyer comes out and tells Vince it’s not him, wait until next week. 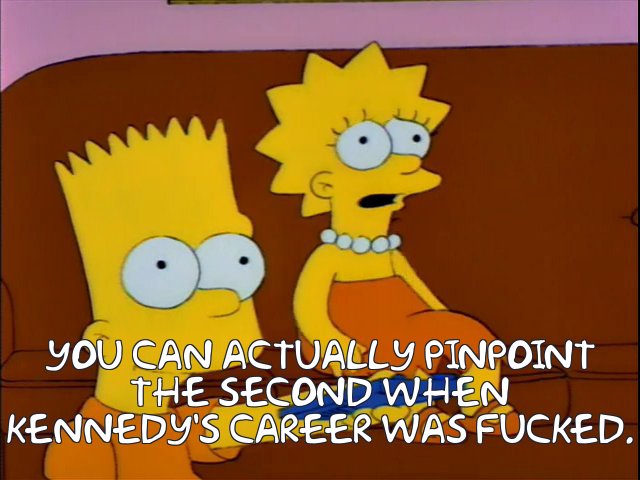 History is made as Justin Roberts announces Stevie Richards as Stevie Richards. Richards surprisingly dominates Thorn with kicks until Dreamer tags in. And he works over Thorn, and Burke too! Oh then Thorn sticks his knee out and we get Dreamer in trouble as usual. Thorn winds down Dreamer (and the action) with a sleeper but Tommy somehow escapes and makes the hot tag to Stevie. It all breaks down, Dreamer takes out Thorn with a Cactus Clothesline and Burke gets the win on Stevie after the Elijah Express.

Winners: Kevin Thorn & Elijah Burke (This series was fun when it was Stevie winning every week but if it’s going to be New Breed vs. Extreme Originals again then it can get to fuck.)

SlowMo JoMo makes his way to the ring as we get the mega-hype from the announcers. They’ve done a good job of bigging this match up and we get a dramatic music video to help. Long feeling out process as neither man wants to give anything to the other. Morrison scowls as he stomps away which is enough to get the crowd to chant for Punk. Punk uses the chants to nail a springboard dropkick for two. MMA kicks keep Morrison grounded as Tazz remarks on JoMo’s physique. Yeah don’t get used to it. Morrison decides to try to Sunset Flip Punk off the apron but Punk thinks ”fuck no” and springboards onto him instead to kick-start the break.

When we return, Punk’s chinlocking Morrison. Punk sees JoMo’s reversal coming and we get a roll-up from an attempted roll-up for two. Punk tries to springboard but Morrison just throws him off like when you press A in No Mercy. Morrison uses his parkour kicks to keep Punk outside. Morrison works over Punk for a while as the crowd chants for Punk’s name (weirdly it’s all kids this week) until he tries the backbreaker/neckbreaker combo but Punk turns the neckbreaker into a Sunset Flip in a counter that was smoother than baby poo.

Morrison isn’t impressed and kicks Punk’s face off. Punk gets punched a lot so Morrison tries to do something off the top but the kid’s cheers and merch money motivate Punk to turn it into a Superplex. Calf kick gets two and the crowd is going BANANA at every near-fall now. Running knee/Bulldog gets two and a big AWWWWWWWW. Punk takes a Pelé kick which sets him up for Starship Pain and he actually nails it but it only gets two. Punk tries for the GTS, Morrison rolls him up and uses the ropes AND pulls the tights but the ref spots it JUST before the three-count. Punk uses the situation to get a roll-up but that’s only 2.999. Morrison recovers and punts Punk but Punk goes all AJPW and punts Morrison before taking a rest. Morrison misses the springboard kick and Punk nails the GTS to win the match and blow the roof off.

Winner and new ECW Champion: CM Punk (Real life may have scuppered the (presumable) plan of Punk winning the title on PPV but given those here-to-see-Raw-and-Smackdown-who-the-fuck-is-CM-Punk crowds have used those matches to buy soda, this was a blessing in disguise as this crowd was 100% behind Punk which made the match. It also helped it was probably their best in-ring performance to date with no mess ups and both men wrestling like they knew each other inside and out. Shame it came about because of the Pharmacy thing but that’s life.)

I’m Maffew and I don’t have shit to plug as I’m off to Scotland to watch the graps. Bye!