So, uh, SPOILER ALERT coming up for WCW.  Like, three months’ worth.

It’s time for the DISNEY TAPINGS!

– WCW came up with a new standard in Because WCW this week, doing a massive taping at MGM Studios in Orlando and basically exposing all their long-term plans while also locking themselves into those plans.  The tapings ran from 7/7 to 7/10, and covered all the happenings on World Wide Wrestling from 8/27 to 11/20.  So here we go!

– First up, Ric Flair will be the NWA heavyweight champion as of 8/27, Arn Anderson & Paul Roma will be the tag champions, and Ricky Steamboat will be TV champion.  There was no US champion at any point during the tapings.

– Barry Windham was not at the tapings and was not acknowledged or mentioned, so clearly once he drops the NWA title to Flair he will be written off the show.

– This has now pissed off the NWA even more, because not only did WCW not ask permission to switch the World title, but they actually went ahead and taped stuff after the title change with Flair as champion!  The NWA is threatening to sue if Flair wins the title at the PPV without asking permission.  (I bet they’re shaking now!)

– Vader was at the taping, but never appeared due to still being injured, and in fact was sent home because he didn’t have medical clearance.  Dave is like “Did he need medical clearance to get interviews, too?”

– On the 9/18 TV show, the Nasty Boys come out as tag champions, but don’t get Missy Hyatt as manager until October.

– The Nasty Boys and Hollywood Blonds appeared to be feuding by November, with the Blonds as babyfaces, but what was going on wasn’t exactly made clear.

– Cactus Jack appears to be main eventing Halloween Havoc against Vader, with the amnesia storyline forgotten.  (SEE WHAT I DID THERE?)

– Thankfully, the Dusty Rhodes v. Assassin feud was nowhere to be seen.

– Road Warrior Hawk debuts at the Clash on 8/18 as Dustin Rhodes’ mystery partner, although the tapings were also hinting at “The Road Warriors” returning.

– Also announced at the tapings was yet another new PPV, on 11/21, which happens to be three days before Survivor Series and probably won’t help the buyrate for either show.  (Definitely not.  Battlebowl and Survivor Series were both complete financial disasters.)

– Halloween Havoc will be 10/24 in Orlando, with Vader v. Jack in a spin the wheel match, Sting v. Sid and Nasty Boys v. Flair & Roma for the tag titles.

– The next set of tapings will happen at the same place in early November, “if there is even still a company at that point.”  (And you guys thought I was anti-WCW.)

– So obviously people were kind of shocked at just how completely kayfabe was shattered with these tapings and how casually they gave away months of storylines and title changes, especially since most of the people in the company were trained and drilled from day one that you protect the business no matter what.

– Dave thinks that it’s dangerous to give away three months of stuff, mainly because if something happens there’s no wiggle room for editing or tweaking after the fact.  (But how likely is THAT?)

– The crowd was packed every day of the tapings, with free tickets for anyone in DisneyWorld who wanted to attend, and it was a rabid crowd for everything.  To make sure everything went smoothly, they showed videotapes telling people who to cheer and boo, and also had literal signals for when to do both in case people were really clueless.  The justification is that they didn’t want actual wrestling fans to be going to the shows because they figured that tourists would be cleaner and better dressed.  (Hey!  Come on!) 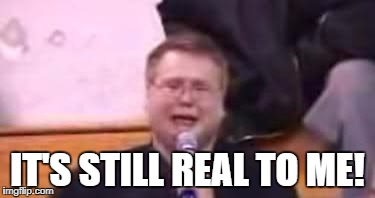 (Uh, point taken.  Luckily for WCW, they didn’t have any wrestling fans watching in 1993 anyway.)

– So, Dave ponders, what happens if someone filmed with a title leaves the promotion in the meantime?  Or gets injured?  Or just doesn’t get over?  (Of if the NWA wins a lawsuit and forces you to change the name of the title to something really stupid?)  Apparently Eddie Einhorn tried this very same idea in the 70s, and in fact all the above scenarios happened and made his product a laughingstock.

– Speaking of dumb, the logical main event for Starrcade, Vader v. Flair to unify the titles, appears to be out of the window and WCW is already back to trying to push Flair as a midcard tag wrestler again after dropping the belt to Rick Rude.  Also, Steven Regal “won” the TV title with no indication that his push is actually going to work.  (Luckily for them he did OK for himself.)

– Really, Dave notes, the most telling thing is that it basically gives rock-solid job security for the Bischoff/Rhodes/Anderson trio, because even if they were all rightly fired for incompetence tomorrow, the new regime couldn’t change anything until November anyway.

– Carlos Colon, at age 47, announced last week that he’s retiring from wrestling.  (But he’s still a youngster!)  He’ll do final matches with Mr. Hughes, Kamala, and Abdullah on 8/6 – 8/8 and then hang it up for good.  (I’m pretty sure he’s still working matches TODAY.  Also, this leads to my next Sporting News column next week:  Wrestling retirements that were a complete joke.)

– The UWFI made a surprising announcement of a US PPV on 10/5, to be aired from Japan with the tagline “It’s a shoot!” 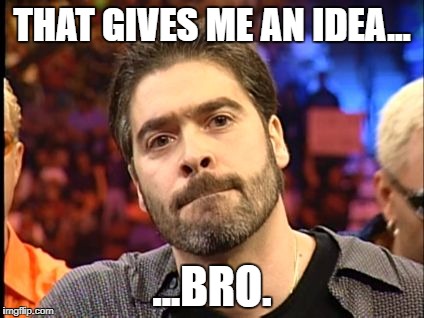 – Of course, no one but actual pro wrestlers or insider fans would have any idea what “a shoot” is.  The show will apparently feature Vader and Dan Severn as the top stars, and Dave is pretty sure it’ll do the lowest buyrate in history.  (Not even close, in fact.  It did about the normal number for a WCW show.)

– Dave on the Mexican scene:  “Main event on that show was a big upset as Felino won a mask vs. mask match from Ciclon Ramirez, who turned out to be Caesar Reyes. It seems every wrestler when they unmask turns out to be named Reyes, although this Reyes is no relation to any of the others, nor is he related to the original Huracan Ramirez.” 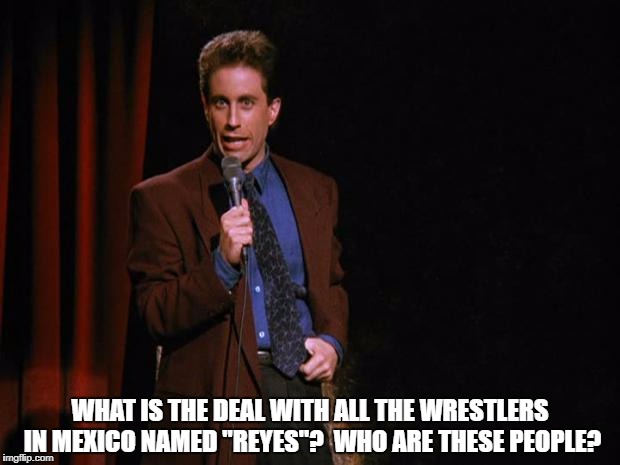 – With Inoki’s political career now basically over, he’s already talking to wrestling reporters again, hyping up his return to the ring against Tenryu and ignoring everything happening to him in the real world.

– The 8/7 New Japan show from Sumo Hall will feature the new heel monster team “The Jurassic Powers” (Hercules & Norton) v. Haku & Barbarian.  (SO AWFUL AND YET I WANT TO SEE IT SO BADLY.)

– The WWN promotion out of Texas was going to build around Crash the Terminator, so W*ING made him their first ever World champion in a tournament final on 7/11 because they didn’t want to lose him.

– Punish & Crush from UWA debuted on the show as well, now being called “Gedo & Jado”.

– Leatherface (Cpl. Kirchner) was pulled from the tour due to his arrest after a brawl in a restaurant.  He’ll spend several months in Japan and that’ll probably end his career over there.  (He got six months in jail and was fired from W*ING, but there were several other promotions more than happy to use him for years to come.)

– With all the departures of talent, W*ING is having to resort to increasingly wacky gimmick matches, like the “Wonder Crush Death Match” that will debut in December:  The ring is surrounded by a cage made of glass, and there are explosives on the glass.  (Hopefully no one throws any stones.)

– Jerry Lawler and Jerry Jarrett fired Dutch Mantell for doing a radio interview on 7/3 and exposing that Brian Christopher is Lawler’s son.  Lawler claimed that Dutch was “exposing the business” by doing that interview, which makes him the world’s biggest hypocrite given that he himself has done tons of those kind of interviews, and as well he works for the WWF, who publicly testified that wrestling is fake before state legislatures all over the country to avoid taxes.

– A former Phoenix Cardinal player named Colin Scott is currently working Memphis to prepare for the WWF.  He’s from Australia and is apparently huge, like the size of Adam Bomb.  (Wikipedia says it’s actually Colin Scotts, and it doesn’t mention anything about him being a wrestler so obviously that career choice didn’t pan out.)

– David Heath is also in Memphis on the “Titan Get Ready Program”, wrestling as the Vampire Warrior.

– The GWF announced that they’ll be starting on the Home Sports Entertainment channel soon, but Dave basically says they’re lying.

– Plans to release a videotape of the Von Erich benefit show have been scrapped.  (Ah, so there we go.  We had been wondering about that one.)

– The new WWN promotion will run their first show on 7/30, featuring Hawk v. The Convict in the main event.  Best name on the show goes to Paul Diamond’s partner:  Tor Mentor.

– Apparently Shane Douglas is headed to ECW for the 8/8 TV tapings.

– Over to the WWF, where Tony Halme from New Japan debuted as Ludvig Borga, a Finnish aryan.  This seems to indicate that the promotion is back to running “USA v. foreign menace” as the top storylines.  (Hell, the heel team at Survivor Series was LITERALLY named “The Foreign Fanatics”!)

– Also debuting were a new team called “The Quebecians”, Jacques Rougeau and a rookie named Pierre Oulette who is really green.

– 1-2-3 Kid beat Ted Dibiase at the TV tapings with Razor Ramon interfering to help him, so this seems to be setting up Money Inc. v. Kid & Ramon at Summerslam as Dibiase’s farewell.  (Yeah, that actually would have been a zillion times better than the lackluster singles matches we got instead.)

– Rockin’ Rebel from ECW got a tryout at the tapings and did well, mostly because he got entrance music and so people thought they were seeing somebody.

– RAW on 7/12 was headlined by Yokozuna v. Crush, which pretty much exposed the weaknesses of both guys but good.

– The bodyslam challenge didn’t help ratings for RAW, either, as it did a disappointing 2.9 rating even after all the hype.

– Speaking of bodyslam challenges, they did one on 7/10 in Montreal, with Ted Dibiase hosting and offering $1000 to anyone who could slam Yokozuna.  A bunch of fans signed up, and one guy acted like a complete jackass when he got into the ring, mocking Yoko and showboating, and when he went in for the slam, Yoko absolutely bitchslapped him.

– Jerry Lawler will be doing a King’s Court segment with Tiny Tim, which Dave thinks is pretty pathetic.  (Oh, just wait until he sees the segment!)

– Tom Zenk missed the Disney tapings with a neck injury, but his contract expires on 8/15 anyway.

– Van Hammer is done and might be headed to the WWF.

– And finally, WCW has a sold show at the Alamodome in San Antonio sometime in late August.  Ticket sales won’t matter, but it’s gonna be one EMPTY building.  (Just for fun I looked it up, and it turns out that they only sold 400 tickets and cancelled the show!)