Well, it's July, and I had another wonderful black box of stuff dropped off on my porch this morning!

Yup, it's a box!  So this month's theme is "Animation", which is vague enough to cover a wide variety of stuff and yet still hit all the usual targets for these things.  So I popped this one open, and what's the first thing that falls out?

HOLY CRAP IT'S A RICK SANCHEZ FIGURE.  Uh…not sure what the red bar saying "Explicit content" on the box might be referring to there. Let's check it out.

Ah, he's flipping us the old double-bird.  This one apparently pays homage to S2E6, with Microverse Rick celebrated here.  This is great and immediately went on my wall of stuff in the man cave, next to Statler and Waldorf.

Next up, the traditional t-shirt.

Might be hard to see there, but it's the old Loot Crate standby, the Teenage Mutant Ninja Turtles, complete with classic van and a turtle pattern on the rest of the shirt.  This one was immediately claimed by my wife as soon as it came out of the box because she's a 90s Turtle cartoon fan, and they do nothing for me.  So that's just fine for both of us.  As usual, a nice shirt.

Next up, the Bob's Burgers Box.  A box within a box?  Oh man, if there's a top in there that just keeps spinning, my mind will be BLOWN.

Unfortunately, not, it's actually a series of real recipe cards for the fake burgers featured on the show.

Not gonna lie, "Poutine on the Ritz Burger" sounds amazing, both in title and recipe.  This is pretty cool, and I have a friend who's one of the animators on the show, so that's a nice little addition.

Next up, Rosalie's favorite thing from this box:

It's two Slurm-themed can coozies!  Lemme tell ya, they work fine for keeping your bottle of water cool, but if you actually stick one of them on a can of soda or other delicious beverage, the smell of vulcanized rubber will overwhelm whatever sugary confection you happened to be drinking and you'll probably need to vom. The kid LOVES them, though, so what can ya do?  Also, despite us watching "Charlie and Chocolate Factory" roughly eleven billion times in the past month, she completely doesn't get the reference being made on the picture because we've never watched the Gene Wilder one, only the Johnny Depp one. 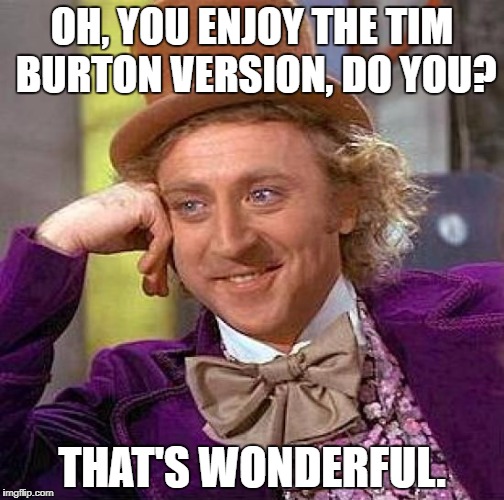 Plus the usual crappy book of crap, and another pamphlet full of games for nerds.  I mean that in the nicest way.  Oh, and the box features more Bob's Burgers art:

Ha, "eggslusive".  Bet it took them minutes to come up with that one.

So yeah, I got a sweet Rick Sanchez figure and my wife got a sweet t-shirt and my daughter can keep her beer cold.  That's a win for everyone, I say!

As always, if you'd like to try this kind of thing out for yourself, stop by Loot Crate's site using the link here and I'll get a couple of bucks for whatever you buy.

Thanks for reading and enjoying these, and I'll see you again next month for Slam Crate!