It’s the last ECW of 2006 and…it’s a Best Of. Oh. Styles and Tazz present highlights of Cena vs. RVD, RVD vs. Show, Extreme Strip Poker (what?), Extreme Elimination Chamber, Lashley winning the title and the three-way from last week. At the end, Tazz gives Joey a Christmas present.

Styles: ”Are you sure? It says ”Michael Cole” on the label…and it’s ticking?”

Tazz wrecks the tree and wishes us all a Happy Holidays (you bastard).

As much as I’d like to leave the recap there, I’ll do next week’s edition too.

Recap of the three-way between Test vs. Sabu vs. Rob Van Dam, which Test won but RVD won the fans’ vote to wrestle Lashley on this episode so it didn’t mean anything.

We’re in Lakeland, Florida and big Test is in the ring to recap the video recap just to make sure we get it. ”dat’s right the winner was me. i’m a winner.” Test talks as well as he looks, rougher than a badger’s arse. Test calls himself the Impact Player, the nickname ECW tried on him and gave up already. Sabu interrupts because someone had to.

Sabu’s lack of character or feud has hurt him these past few weeks, despite all the video packages they do for him he’s just a guy at this point and the crowd reactions have been decreasing. Test locks in a bear-hug after a minute which is depressing. Sabu squeezes out and springboard kicks him. Sabu comes off again with another springboard kick because that’s all he does when there’s no weapons to use. Test gets kicked in the face off a Flying Nothing and Sabu gets a two-count off a Springboard Tornado DDT. Sabu comes off the ropes yet again but Test kicks him in the face and he finishes with the TKO.

Winner: Test (So they decide to push Test after getting rid of Heyman, a man who spent his best years hiding wrestler’s negatives? Great. So now we have crappy-arse matches that are so obviously geared to make Test look good that…Test doesn’t look good. Didn’t help that Sabu wrestles like someone spamming the same move in a Fighting Game. At least it distracted the crowd from chanting ”steroids” at Test for once.)

Advert for New Years Revolution 2007, the one with the car crash D-X vs. Rated RKO match.

Burke and Man-Bear-Terkay are in the ring. Burke is great on the mic, Terkay has the body language of someone who has been dragged to a party and doesn’t know anyone.

This match again because there’s no other tag teams on ECW. Someone in the comments section suggested that this show needed tag titles which would have helped but right now, THIS is the tag scene. The Hardyz and MNM have gone back to the big leagues so we have Burke and Terkay beating the same two guys who are half their size again. Terkay finishes with a big slam and an armbar.

Winners: Elijah Burke & Sylvester Terkay (I should have made a cup of tea instead)

Next week we get Hardcore Holly vs. CM Punk in a real, normal match. Matt Striker recaps the important details with a blackboard until Holly interrupts and Striker does a runner. That probably happened backstage for real. Holly thinks he’s going to win but the commentators remind everyone that Holly tapped out last time (though not officially).

We get an interview with Tommy Dreamer who is sat on his couch feeling bad, but he promises to come back and beat The Great Khali. Crowd cheers for him.

Brad Armstrong is back on commentary for…oh shit, it’s This Match.

Brad: ”I used to use that move when I wrestled.”
Tazz: ”Did they have ropes when you wrestled? I thought you wrestled in sand.”
Brad : ”Hey, stand up when you’re talking to me. Oh.”

Thorn strikes Balls repeatedly to start this match, with further shots to the head. Thorn drapes Balls over the ropes and gives him a running kick to the head. Brad and Tazz ignore the match and bicker some more as Thorn hits Balls with an innocent-looking elbow which clearly hurts Balls who insists Thorn pin him.

Winner: Kevin Thorn (Too short to mean anything and the drama overshadowed the match)

Ref gives the X symbol and the replays show how bad it was as Balls bleeds from the mouth.

From Balls RF Video 2009 shoot: Balls doesn’t have front teeth because of all the fire-breathing he used to do. It’s not from drugs, it’s from using water-seal. He planned on having Thorn knock his teeth out to make Thorn look good and had some fake teeth made, with the idea of Balls using this to get insurance money. This went nowhere but Thorn beat the fuck out of Balls on the TV match so Balls hit him back. Balls expected a clothesline so he put his head up and Thorn elbowed him in the chin/throat so Balls couldn’t breath very easily so he couldn’t take his finisher. Backstage Balls shouted at Thorn then noticed guys like JBL watching, ready to see the fight but Balls told him he wasn’t losing his job over him.

Yikes. Lashley is interviewed by Rebecca, as if the last match wasn’t brutal enough.

Well OK technically his debut was in The Wire, but his acting was better here. 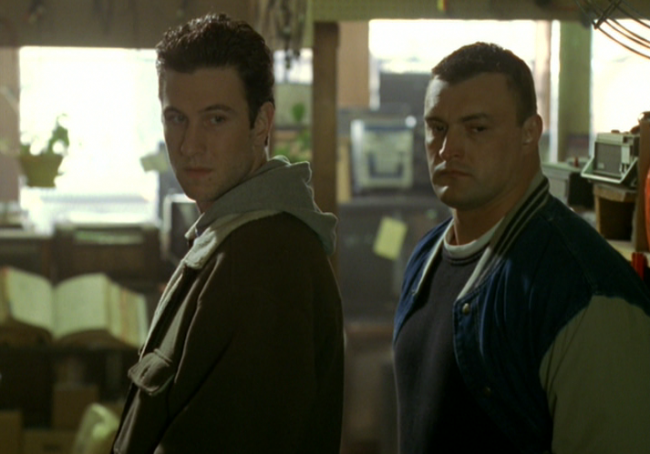 RVD is clearly the crowd favourite. While I’m at it, water is wet and the capitol of Nebraska is Lincoln. RVD and Lashley measure each other up and have a mutual appreciation stand-off. Lashley slams RVD and locks in a bear-hug. See when Test does it, he makes it look like he’s knackered but when Lashley does it the commentators insist he’s trying to prevent RVD from flying around. It’s all about the presentation. It helps that Lashley follows this up by military pressing RVD to the outside like a bag of sugar. He rolls him in for a two count and goes back to the bear-hug. RVD comes back with a million kicks for two. Springboard Moonsault also gets two and RVD pauses to do the finger-point so his Monkey Flip is countered into an Overhead Belly To Belly. RVD tries a spin-kick but Lashley grabs him and snaps him with a Torture Rack slam. This is very PWG. Lashley gives him a stalling suplex and revs up the spear, but RVD dropkicks the knee. RVD with the Shittest Van Daminator Ever as he doesn’t decide in time where he wants to kick Lashley and ends up hitting nothing.

The commentators debate whether or not he hit anything. RVD comes back with Rolling Thunder but Lashley exits the ring in time. Lashley drags him outside but RVD front suplexes him across the commentators table and decides the best course of action is a big fucking dive.

As cool as it looks, the ref decides both men are out and ends the match. Crowd: ”Bullshit!”

Winner: No-one (This was the best ECW match since Hardyz vs. MNM. RVD and Lashley worked well together and even though I remember Lashley being greener than goat shit during this time, here he looked as impressive as WWE saw him through their protein-goggles.)

Overall: RVD vs. Lashley was impressive and the show continuing to remember it’s weekly is nice but the rest of the show still has problems. The main one being ”interest.”

Speaking of which, that’s all of ECW 2006. Are people wanting me to continue through 2007? I want to keep on typing on this Blog Of Doom so if not ECW 2007 there’s Herb Abrams’ UWF or…I don’t know, that’s the only non-WWE/WCW stuff I can’t see reviewed anywhere. Fuck it, I’m open to suggestions.