Congratulations to the Blue Jays for completing the choke and handing the AL East to the Red Sox!  Now they just need to cough up the wild card spot and finish off the season with class.

Not that I’m bitter.

But hey, on the bright side, Dave has once again embraced both uppercase and lowercase letters!  And we get one of the most Because WCW issues ever.

– In the top story, Lex Luger was supposed to win the NWA World title from Ric Flair in Chicago, and it didn’t happen.  And it was the end result of a giant powder-keg of political b------- behind the scenes that Dave just has about had enough of.  So here’s what happened:  Originally, Luger was supposed to win the title on the Saturday night show in St. Louis, and they booked special live studio cut-ins with Jim Ross to announce the title change and everything.  And then at some point during the week leading up to it, the plan changed and the title change was moved up a day to Friday in Chicago.  And here’s the best part:  The WCW higher-ups changed the date because they thought too many knew about the St. Louis title change, so they decided to swerve everyone (whoever those nebulous people that might have known about the match were) and do it in Chicago instead so “everyone” would be surprised.  So basically they felt like a few “insiders” and maybe a couple of hundred wrestling fans knew, so they pulled the plug and changed the date.  (Dave was clearly one of the people who knew, because two weeks ago there was a letter in the reader section that asked “When will Luger get the NWA title?” and Dave replied in typical vague manner “Sooner than you think” or words to that effect.)  But that wasn’t even the weirdest part of the story.

– The big part of the story is that Ric Flair had it written into his contract (by Jim Herd) that he would have Bret Hart-style creative control over who and when he dropped the World title to, and that he required three days notice beforehand to do so.  So the story is that WCW planned this big title change and spent all this time swerving a few hundred fans, but FORGOT TO TELL RIC FLAIR.  So Flair, who apparently wasn’t exactly the most easy-going guy about the whole thing, got into a giant screaming match with Jim Herd over the situation, and now there seems to be a huge rift between them that might never be healed.  Here’s the Dave-est sentence possible summing up the situation: “This wasn’t as simple as ‘We want you lose’ and ‘Absolutely, I won’t do it.’  Negotiations went on, and when it was all said and done it was Herd, not Flair, who decided not to have the title change.  The key left out points of the story are here for those trying to read between the lines.”   (Much like a really good wrestling storyline, this one would simmer and pay off in a MUCH MUCH MUCH bigger manner one year hence!)

– Dave actually compares the situation to the famous Savage-HTM non-change on the Main Event in 88, saying it’s the closest example to what happened with Flair and Luger.

– Dave has another example!  Last year when Flair was “injured”, they asked Sting to put over Terry Funk leading up to Bash 89, and Sting refused, leaving Funk as a pretty non-believable challenger to the title.  Sting was told by management that it wouldn’t tolerated, and yet they still gave into him and put Funk over by DQ instead of a pin, even though Funk would have happily put Sting over cleanly after the Flair feud all over the country in exchange for one job.  And then Ricky Steamboat agreed to put over Lex Luger for the good of the company, and yet immediately got fired when his contract was up, so the message became “Every man for himself” and anarchy results.

– However, this title change wasn’t even for the good of the company, since the Flair-Luger program was drawing at the houses even without a title change.  In fact, this title change was booked to punish Flair for whatever feud was developing between him and Herd, and not for any business reasons.  Really, if you make Luger champion now, who does he even defend against?  Mean Mark Callas?  Dan Spivey?

– The next guy caught in the crossfire of b------- over this is Steve Beverly, who is doing the 1-900 line reports for WCW and made the grave mistake of reporting on the Flair-Luger match before it happened, and not even giving away the finish or anything but just talking about the match happening.  So WCW brass is blaming him for leaking the results and freaking out about it.  (Like, come on, we’re all super-hardcore fans, and did ANYONE outside of WCW’s imaginary group of conspirators actually know about this title change?  I always thought it was the PPV matches where Flair was supposed to lose.)

– Even with the Wrestling Summit coming up in two weeks, WWF and All Japan are STILL arguing over the main event.  It’s still tentatively set to be Hogan v. Gordy for the WWF title, but Vince is pushing hard for Hogan v. Dusty Rhodes instead.  (And what a classic THAT would have been!)  The rest of the card appears to set in stone, at least, including Warrior v. Dibiase for the IC title.  One minor set of changes is that all the New Japan guys will only be working with each other, so that Nippon TV (home of All Japan) can cut those matches out of the broadcast and act like they’re not involved with the show.  They’ve only sold about 30,000 tickets in the 63,000 seat Tokyo Dome thus far, with Japan’s declining economy taking a toll on the business over there right now.

– Also on the show, Vince’s son Shane McMahon will make his debut as a referee.

– Dave is amazed by young Yoshihiro Asai down in Mexico.  Apparently he does this move where he jumps onto the middle of the top rope, but instead of springboarding into the ring like Pillman, he moonsaults backwards onto the floor!

– Fun fact:  There’s this young guy in Florida who’s only 17 and was trained by Dean Malenko, and he’s doing some amazing stuff in the style of Dynamite Kid.  Except his name is Lightning Kid. 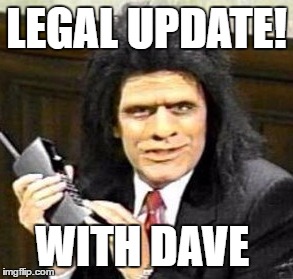 – Blackjack and Kendall Windham plead GUILTY to possession with intent to sell of counterfeit 20s, and sentencing is May 15.  They’re facing a max of 15 years in prison and a $250,000 fine.  (Hopefully they didn’t accept any cash from them as payment.)

– Bruce Hart has attempted to restart Stampede Wrestling, and has begun touring with crowds around 600 people as he defends the Commonwealth title against Johnny Smith.  (That must not have lasted long, as I don’t remember it at all.  And they never got TV.)  The opposition, Fred May’s CNWA (Can Not Wrestle Association) is drawing less than 100 people per show and pretty much is on death’s door. Kensuke Sasaki came in for the last TV tapings and threw a stiff kick at a guy during his match, which made Ed Whalen immediately stop the cameras and end the match, as he fired Sasaki on the spot.

– Paul Diamond is currently doing a tryout run for the WWF, but he’ll probably get a permanent spot after Wrestlemania.

– Hogan is doing another move after Wrestlemania, but it’s not a major release.  (Oh yeah?  A modern classic called SUBURBAN COMMANDO begs to differ!)

– Although Dave had predicted that closed circuit for Wrestlemania would be a hot ticket in Canada, that is proving not to be the case.  They’ve already downsized most US locations to 800-1000 seat buildings for the showings, and cancelled dozens of others, and Canadian locations are selling poorly as well.  (Scott update:  At this point in my life I moved from the Vancouver area to Edmonton, where I stayed for the next 15 years, and Wrestlemania was the first wrestling show I went to there.  I’d say maybe, MAYBE 2000 people were in the Coliseum that day, with pretty much everyone on the floor watching the big screens set up in the middle and virtually no one in the stands at all.  Contrast that with even the year before, where my dad and I had to sit in the upper deck of the Coliseum in Vancouver for Wrestlemania V in order to get a seat.)  Dave is drastically revising his predictions for the PPV buyrate in a downward direction for this one.

– Dave continues to be impressed with the weight loss of Big Bossman, dubbing him “The Medium Sized Bossman” in celebration.

– The WWF 900 line and bodybuilding magazine both launch later this week.

– And in news the world was just waiting for, Jim Crockett is back in power in the NWA, sitting on the booking committee now.  Ric Flair’s allies, Jim Cornette and Kevin Sullivan, are rapidly fading from view and Cornette in particular is burning bridges with the company all over the place.

– Speaking of burning bridges, the company got tired of waiting for Buzz Sawyer’s wrist to heal and just fired him.  (He should have just started wearing a gimmick cast like Bob Orton to mess with them.  Unfortunately, this pretty much marked the end of Buzz’s career, as it turned out.)

– Bam Bam Bigelow and Humperdink are coming in any day now.  Just you wait and see.

– Scotty the Body was offered a TV tryout, but still no word on what they want to do with him.

– Paul E. Dangerously will in fact be returning as a manager after all, and they’re gonna put him with Mean Mark.  (Talk about a DEAD END.)

– Sting is recovering from knee surgery with extraordinary speed, and he might be back in July or August now.

– For some reason there’s talk about bringing back Al Blake, aka Vladimir Petrov, who is now out of jail.

– The actual house show in Chicago where Flair was going to drop the title to Luger ended up drawing 6500 and cost thousands of dollars in expenses because they flew in Chris Cruise, Bill Apter, Lance Russell and Dennis Brent to cover it for various media, plus brought camera crews to tape it, so it turned into a giant WCW-like fiasco of WCW proportions.  Because WCW.

– Some guy will be working in a Robocop suit in some manner at the Capital Combat PPV on 5/19.

– OK, WCW has got it now.  They have decided that their justification for breaking up the Midnight Express and firing Jim Cornette will be that they want to push Bobby Eaton as a singles wrestler, and have him join the Four Horsemen.  Which currently only have one member: Ric Flair.  So the name is kind of a misnomer at the moment.  On the bright side, whoever teams with Bobby in this new role will immediately become half of one of the best teams in the world.

– The Japanese already have a name for Gordy and Williams:  The Miracle Violence Combination.  (Why can’t the 40 writers for WWE come up with a single tag team name that f------ badass?)  The name is a tribute to the Brody/Hansen team, who were dubbed The Miracle Power Combination.  (Also badass.)

– And finally, Dave debunks the Hogan-Beefcake relationship once and for all at the end of the letters section, and also jokes it’s about as true as the rumor that Ultimate Warrior died due to his heart exploding from steroids.  Not cool, 1990 Dave.