OK, back just four days after the Rumble issue to wrap up the territories and update the big stories.  Dave is still counting the money from Tyson before it even happens.

– The big news this week is that Vince McMahon is going to Japan!  He did a press conference with Giant Baba to announce that 4/13 would be the first ever combined WWF/New Japan/All Japan show at the Tokyo Dome, as Ultimate Warrior is unleashed on the country for the first time.  Millions of dollars are a certainty.

– The idea of New Japan working with All Japan was preposterous enough, but teaming up with the WWF is like, super-preposterous.  Really, it shows how terrified of the UWF that Baba really is, and rightly so.  Really, the most interesting thing out of the situation is the fact that the NWA isn’t involved at all, because they mean far more in Japan than the WWF does, so clearly Flair pulling out leaves someone in Japan…what’s the word…? 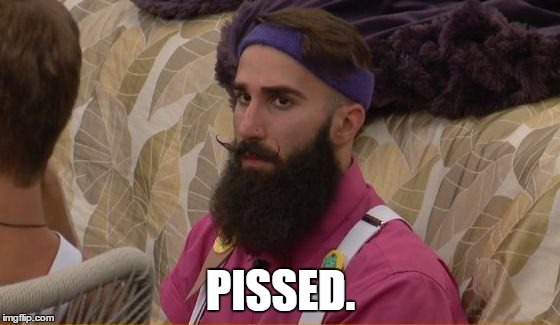 – Dave would like to once again stress that the AWA title is not changing hands because the match has been shunted down the card and wouldn’t mean anything anyway.

– Nothing new on the Tyson front, although he did send in a telegram to the WWF press conference in Detroit, clarifying that he is not afraid of either Hulk Hogan or Randy Savage.  No one knows how much Tyson is getting paid for the referee gig, but it’s a LOT, and both NBC and the WWF are expecting the biggest TV rating for wrestling EVER.  (What’s that saying about pride and the fall?)

– The latest Saturday Night’s Main Event was at least better than the last one, which is not exactly high praise.

1.  Randy Savage pinned Jim Duggan in 7:55 to retain the crown.  Usual SNME match, but Savage was HOT here, carrying the match and taking bumps like crazy.  Savage was bouncing off Duggan like a ping pong ball, but used the loaded purse for the pin.  ***1/2  (Yeah, I loved this match, too.)

2.  Hogan & Warrior beat Perfect & Genius in 7:51.  More big bumps from the heels here as Perfect showcased his acrobatic bumping over and over, basically a Terry Funk-style one man show.  Hogan stole the pin from Warrior, legdropping Genius to win.  Then the babyfaces pushed and shoved to end the segment.  ***1/2  Had their been another worker in there with Hennig, it would have been ****+ easily.

3.  Jake Roberts beat Greg Valentine by DQ in 5:17.  Neither good nor bad, with Dibiase interfering for the finish.  **

4. Dusty went to a double countout with Rick Rude in 8:42.  Dusty is somehow getting WORSE since coming to the WWF, adding “old and broken down” to “obese”.  Rude tries his own one-man show, but it was hopeless.  DUD

5.  Dino Bravo pinned Ron Garvin in 3:17.  Dino Bravo is the WORST, says Dave.  Garvin isn’t much better, he also notes.  And somewhere a young zanatude fires off an angry letter to the Observer. 1/2*

– Back to the lead story, as there is definitely bad blood over Flair pulling out of the show, and New Japan was so incredibly pissed that they were willing to do business with Vince McMahon just to twist the knife on the NWA.  Although, to clarify, All Japan and the WWF were already doing a joint show on that date, but New Japan will now be a part of it.  Talk of a main event like Hogan v. Tenryu or Hogan v. Hansen, but it seems more likely to be boring old Hogan v. Savage.

– Off to the territories, starting with the USWA.  JYD was supposed to work a title match with Jerry Lawler in Dallas, but legit missed his plane, so they brought out all the wrestlers and did a fan vote on who should get the title shot instead.  With all the star power like Kerry Von Erich and Chris Adams to choose from, the fans picked heel color commentator Terrence Garvin, who does the mincing gay act.  He lost, of course, and then later in the week JYD got his title shot elsewhere and had one of the worst matches in the history of Lawler’s career.

– Jerry Jarrett is seemingly losing interest in wrestling and getting more involved with monster truck shows and tractor pulls.

– Jerry Lawler has been getting heat back in Memphis by using a portable phone gimmick ala Paul E. Dangerously, and Dave notes that Lawler actually used to get on Dangerously all the time for using such a “stupid gimmick” like a phone, and in fact wanted him to drop it completely.

– Gary Young is feuding with Dustin Rhodes and Terry Funk, doing a gimmick where he claims to be the only real Texan out of the three of them.  And in fact he’s RIGHT, as Dustin was born in Florida and Funk was from Oregon.

– Now that the WWF has stopped insisting that Barry Windham is really coming back, honest this time, All Japan has started promoting that he’ll be coming in for THEIR tour.  Honest he will.

– Sadly, Inoki’s bonkers trip to the Soviet Union was kind of a financial failure, as the Russian economy is so weak that ringside seats had to be priced at around $10 to sell out the building, so even with a full house they only made $90,000 on the show.  Factor in travel and setup costs, and this was a loser.

– FMW did a tournament to determine their first champion on 1/7, and had their first riot at the end of the show.  Aw, that’s sweet.

– Jushin Liger did a tour of Mexico and actually didn’t get over at all, as he had trouble working the other side of the body.  However, fans thought that the costume was neat and got into that.

– And now, the latest in the death of the Stampede, as evil producer Fred May is SHOCKINGLY now trying to start promoting his own wrestling promotion, and might get a spot on TSN.  Which, shockingly, kicked off Stampede not long ago at the behest of Fred May for being too violent.  How about that.

– ICW has a guy with a gimmick called “The Wrestling School Dropout” and it’s apparently hilarious.  (Wait, wouldn’t that be Kevin Nash?) 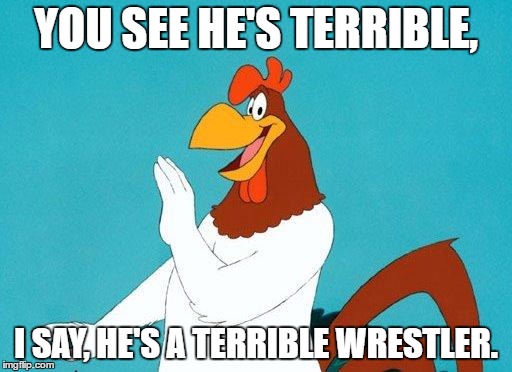 – To the NWA, where it appears that El Gigante is already being written off as a failed experiment and we won’t be seeing him after all.

– The “backbiting” behind the scenes is just so out of control at the moment that Dave JUST CAN’T EVEN.

– And finally, to wrap things up, Dave has some time to catch up on Roller Games!  So this week,