Dave was gonna take the week off and work on the yearbook, but there’s just too much going on.  Plus, you know, that would require taking time off.

– In the big news of the week, it’s a virtual lock that we’re getting Hulk Hogan v. Ultimate Warrior at Wrestlemania VI.  They’re probably doing some kind of angle to set it up at Royal Rumble, and if not there, then on SNME, which was taped on 1/3.  Dave has only heard “third hand and sketchy” reports on the show, but there was some kind of a miscommunication between them during a tag match against Mr. Perfect & The Genius.  Dave thinks the most likely outcome is a Warrior heel turn, because that’s what they always do.

– However, Dave thinks that if Hogan really is leaving, then the best thing he could do is put over Warrior on the way out and make a star as close to the same level as Hogan himself as possible.  In fact, Warrior is the first guy they’ve done a program with where his popularity is equal to or even greater than Hulk’s.  So we’re kind of in new territory here.

– Now, if Warrior isn’t gonna turn, then the most likely scenario is doing a face v. face match and going to a draw, like the Bruno v. Pedro match from 1972. That being said, most face v. face matches don’t draw, although this one probably will draw on the Wrestlemania name.

(For those keeping track of the minutia of my life, at this point in the writeup I get distracted because my wife is watching “A Million Ways To Die In the West” on Netflix and I just kind of wander away from this and watch that instead, then realize it’s sleepy time and decide to finish another time.  Hence, why it was delayed for a day.) 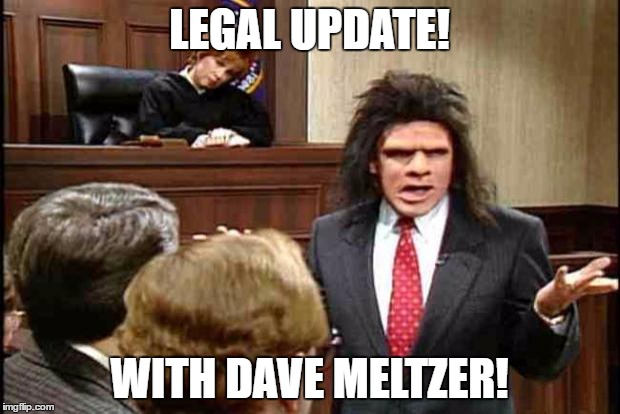 – So apparently the Windham family was part of a larger counterfeiting ring, which had been under investigation by the federal government since about April.  (Geez, don’t get me started on the government.  Always trying to prevent the little guy from making an honest buck.  Well, in this case, literally, I guess.)  The men involved in the ring are being charged with making more than $1.2 million dollars in fake $20 bills, and in fact the police nailed them on a sting operation where they bought $1 million in cash.  And guess who was dumb enough to hand a suitcase full of counterfeit cash to an undercover officer.  Go on, take a guess.  You’ll never get it, it’s too shocking. 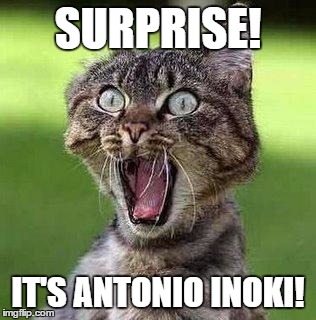 (What?  No, it’s Blackjack Mulligan.  Stupid meme. I BUILT YOU AND I CAN DESTROY YOU.)

– Wow, that got dark fast.  Anyway, the police pretty much managed to get their hands on all of the money that’s been distributed to date, and Kendall and Blackjack are both being charged with possession of counterfeit money.  (Is that really a crime?  I’m…uh…asking for a friend.)

– Speaking of surprises, and this is a legit one, All Japan and New Japan have agreed to trade foreign talent to freshen up the shows.  In other news, hell freezes over.  Stan Hansen will be working for New Japan, and Steve Williams will be working for All Japan.  (Talk about a win-win!)  Basically UWF is destroying both guys so badly that it’s an “enemy of my enemy” situation, plus Inoki has been deposed as NJPW president by Seiji Sakaguchi, who has a much less adversarial relationship with Baba. Also, Vince is booking a WWF show at the Tokyo Dome in April, and again neither side wants Vince to come in and destroy them, so they’d rather work together.

– Wrestling came to Russia on New Year’s Even, at Lenin Stadium.  Dave wants us to note that it’s not Lennon Stadium, like the Beatle.  The main event saw Inoki teaming up with Shota Chocakdiaojdojioadfjifodafdakfjdakfdkad or however you spell it to beat Brad Rheingans and Masa Saito. (I think Dave spelled it right, but my interpretation is funnier because I’m not hampered by things like journalism or giving a s--- about accuracy.)

– More details on the merger between CWA and USWA!  Jerry Jarrett actually wanted to tape TV out of Dallas exclusively, but his deals with WMC-TV run until the end of the year so he just can’t abandon Memphis yet.  And hey, it’s only $38 to fly from Memphis to Dallas.  (I bet they didn’t even charge $20 to check a bag and you could probably smoke on the flight and take target practice on the First Class shooting range.  Times sure have changed.)

– The NWA announced the lineup for Clash X on 2/6 (aka “The Show that F----- Up Their Plans For the Next Six Months”) and the main event is Flair / Sting / Arn v. Dragon Master / Buzz Sawyer / Great Muta in a cage match, plus the Steiners defend the tag titles against Doom with the masks on the line.  Also, the debut of the New Skyscrapers: Danny Spivey and “Mean” Mark Callas.  Apparently Callas is working in a tribute to his trainer, the Spoiler, by doing a ropewalk spot in his matches.

– Stu Hart is already talking about restarting Stampede Wrestling sometime in March, but Fred May is basically promising that they’re never getting back on TV again.  In fact, he had the reruns of the show pulled from TSN and replaced with a REALLY shitty indy promotion out of Winnipeg with top stars like Ken Patera, Baron Von Rashke and Sheik Adnan El-Kaissey.  That would be some real rough n’ tumble action in 1968, Dave notes.

– The WWF continues to alienate cable companies by portraying them as Satan-worshipping child molesters on their TV show (OK, Dave didn’t say that, but I think we were all thinking it) as they try to hardball PPV distributors Request TV and Viewer’s Choice out of their hard-earned 10% of Titan’s money.  The WWF’s argument, which is the sane and normal one for once, is that these guys don’t do s--- to promote or add to the PPV itself, so why do they get to skim 10% off the PPV profits just because they’re a middleman?  Also, who’s to say they’re going to stop at 10%?  What happens if they demand 20% or 30% one day, since there’s no competition for them anyway?  Finally, Viewer’s Choice is owned by five of the major cable companies, so that’s just shifty.

– A new group called the Western Wrestling Alliance is apparently sinking a bunch of money into their own facility and may have a timeslot on FOX.  (That went nowhere.) 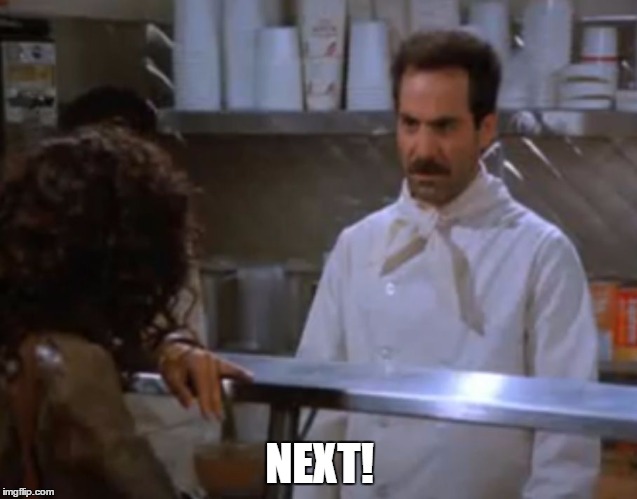 – Right you are, Soup Nazi.

– Interesting angle in New Japan that’s pretty outside-the-box, as they did a show on 12/19 at Korakuen Hall with some of the “young guns” of Japanese wrestling and Riki Choshu in the main event.  During Choshu’s matches for the past few weeks, three prelim guys (HIro Saito, Norio Honaga and Tatsutoshi Goto) have been following him around holding up a sign at ringside challenging him. So they do the show at the Hall and it ends normally, and then as fans are leaving the building, the “Blond Outlaws” as they’re known attack Choshu right in the parking lot while he’s leaving the building, beating him down with tire irons and kendo sticks while the fans are all going to their cars.  That’s pretty cool.  So the Outlaws will get their one shot at the main event, with a six-man against Choshu, Hiro Hase, and Kobayashi, and if they lose, they go back to jerking the curtain.

– Bill Dananhauer debuted in Portland as The Equalizer and holy cow is he green and terrible.

– Ultimate Warrior had actually been doing car commercials in Dallas up until 1989 because he signed a long-term deal as Dingo Warrior and I guess couldn’t get out of it.  So finally Titan pulled the plug on it at end of 89, and the car dealership started using a new guy called the BINGO WARRIOR, who does rambling pro wrestling interviews on the commercial, until the dealer asks him “But can you sell?” 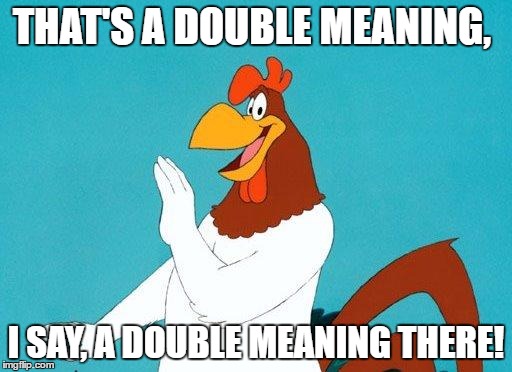 – Is Foghorn Leghorn still a thing with you kids today?

– Dave doesn’t have details yet, but Big Bossman turned babyface at the most recent tapings and will be feuding with Ted Dibiase.

– The assumption from the NWA people is that Sid won’t be around for the long haul when he returns from injury, because he’s guaranteed to leave for the WWF when his contract expires.

– And finally, for those who wonder why NWA (or “WCW” as they’re sometimes going by now) never books guys on shows like Arsenio Hall…well, get this.  WWF actually got a few guys like Hogan and Savage on the show (in Hogan’s case, a very infamous appearance) but Hall is actually a fan of the NWA product and wanted to have Ric Flair or Sting on the show.  So the people booking the show called TBS and got nowhere, because TBS and FOX are rivals.  Then Hall himself reached out to WCW and tried to get the Freebirds, Flair, Lex Luger and Missy Hyatt on the show, and he was turned down flat.  Why?  Because Hall had booked WWF wrestlers on the show previously.  (Say it with me…BECAUSE WCW.)