It’s time to go…BACK TO THE FUTURE!

Welcome to the 90s, where the memes are more futuristic and everyone writing for Buzzfeed is busy being born!

This one is a bittersweet issue for me personally, for reasons that will be obvious within.

– In the top story, the WWF’s battle with the PPV companies continues, as they began a whiny campaign during the No Holds Barred PPV, urging viewers to write into their cable company and complain about the ones that aren’t carrying Royal Rumble.  In fact, Jesse Ventura FOUGHT FOR HIS COUNTRY and it’s un-American not to allow people the freedom to order WWF PPVs.  (But only WWF ones.  F--- WCW, those commies.)

– Obviously, Dave notes, it’s ridiculously hypocritical for Vince to talk about “freedom of choice” after all the s--- he pulled over the years, but the whole thing is basically a business move anyway.  Vince feels like the 10% that the PPV companies are taking is too much, and further Vince thinks that he can survive without them.  It’s a big gamble, though.  Since his shows are making money, he has the upper hand at the moment, but that might not always be the case.  (As it turned out, Vince was the one who blinked first and gave in before Wrestlemania.)

– Dave actually calls the Rumble PPV a “sacrificial lamb” for the cause, noting that the buyrate was the closest thing to a flop they’ve had since the Wrestling Classic, so if a bunch of PPV companies drop it, then no big loss.

– The No Holds Barred show appears to have done a 1.6% buyrate, for about $2.3 million.  Given that the movie was already available to rent at the video stores for a buck or two, you’d have to call that a success.  The reaction to the show was mostly negative, since most of the actual time for the wrestling match was spent hyping the Royal Rumble and telling fans to write letters to their cable companies, with the actual match only going 9 minutes.  It was originally set to a singles match, but everyone seemed to know what a disaster that would be and they put Savage in there to make it watchable instead.

– Onto Wrestlemania speculation, as Roddy Piper is rumored to get the shot at Hogan with his departure from Prime Time Wrestling, but Ultimate Warrior is still the most likely suspect.

– Andre & Haku won the tag titles from Demolition on 12/13, with the title change actually airing this past week, but they wore the belts to all the house shows between the actual title change and the TV match as well, which goes against the WWF’s long-standing tradition of ignoring stuff until it happens on TV. The change actually came about because a newspaper article made fun of them for continuing to recognize Tully & Arn as champs even after they had lost them to Demolition.

– In Memphis, the CWA era comes to an end as the USWA name officially takes over in Jarrett’s promotion as well.  One of the biggest immediate changes is the end of the weekly Monday arena show in Memphis, which is being cut due to declining crowds and increasing expense. The talent in Dallas is getting very nervous, as Jerry Jarrett moves his operations closer to home again and starts phasing out the Texas promotion, and in fact Eric Embry has already quit and won’t be back.

– And yet another depressing end to a promotion, as Stampede Wrestling closed its doors on 12/18.   The final straw was the long-standing problems between Ed Whalen and Bruce Hart, which resulted in to much of the content of the show getting edited off TV completely.  In fact, Whalen’s main ally Fred May, producer of the show, refused to air any overt violence, blood, run-ins, racial remarks or foreign objects, and it got to the point where almost nothing was making it onto TV.  The pay situation was also bad enough that Whalen himself had missed six of the last eight tapings over pay disputes, and most of the crew was being paid weeks or months late, if at all.  (Once again, for further reading on the subject, check out the amazing “Pain and Passion” by Heath McCoy, detailing the long and sometimes ugly history of the promotion)

– The trial of Hulk Hogan began on 1/2, as Richard Belzer is suing him for $5 million after the incident in 1985 where Hulk put him out with a facelock and dropped him onto the stage.  Vince desperately wanted it settled out of court to prevent embarrassment, but Belzer insisted on pressing forwards because he’s got some personal animosity over the incident.  Hogan will reportedly not be called to testify.

– Another bit of Hogan news is that a Washington DC newspaper is reporting that he’ll retire and work for Disney after the Main Event show on 02/23.  Dave thinks this is ridiculous, since Hogan is under contract to the WWF until 1994 and he always talks about getting out of wrestling and nothing ever happens. More importantly, if Hogan worked for Disney, he’d have to shave off his mustache, and that’s just nonsense.

– And just as Dave was typing up the Hogan-Disney rumor, Belzer settled out of court before the trial even began.  Terms weren’t disclosed, but it was “very healthy” for Belzer.  (I believe the joke is that he bought a mansion and named it after Hulk.)

– In other dying promotion news, the AWA miraculously had its contract with ESPN renewed at the 11th hour, after ESPN had been openly saying that they would drop the company and air baseball instead.  Since the AWA is basically a TV-only company at this point, losing that contract would have been the final nail in the coffin for them.

– More legal trouble, as Kendall Windham and Blackjack Mulligan were arrested for counterfeiting and Barry had to pay $25,000 bail to get them out.  (Hope that the judge took a good look at the money he used for bail!)

– Dave stops to make fun of the PWI awards this year, specifically the Eric Embry win for “Most Inspirational”.  What does watching him inspire us to do, Dave wonders?  Eat better?  Throw up in the ring?  Book yourself to the top of a wrestling promotion?

– Barry Windham is still no-showing all his WWF house show appearances, although that doesn’t stop them from continuing to advertise him.  (You could say they’re counterfeiting the people.)

– Randy Savage and Dusty Rhodes will be working together coming out of the Royal Rumble.

– Lots of heat around the house shows after Christmas weekend, as Hogan’s plane got diverted coming into St Louis due to bad weather and landed in Memphis, but instead of just driving to the show he decided to wait for another flight and missed the show.  However, not only did the WWF not announce he was gone, they kept announcing during the show that Hulk “might still be coming” and proceeded to stall for two hours until they finally just announced at the end of the night that Hulk wasn’t there.

– The final changeover to the USWA in Memphis continued, as Jerry Lawler destroyed the set in a fit of rage after losing the USWA title to longtime jobber King Cobra, angry that he not only lost the belt, but lost it to a guy who was “stealing” the King moniker.  Of course, the title switch won’t be acknowledged in Dallas. (He only held it for a week anyway)

– The Master of Pain worked underneath on the show show with Lawler v. Cobra, telling people that it was his last night because he’s going to the NWA.

– To the AWA, where John Nord returned as Yukon John Nord, having shed his previous “bad image” that came about from hanging around with guys like Bruiser Brody (this was an actual thing said on TV) and now he’s reading the Bible and he’s good to kids.

– Paul Diamond & The Trooper won the tag titles from the Destruction Crew on the TV tapings, but it’ll be returned before the next show.

– Pat Tanaka is gone and will be headed to the WWF as a Japanese heel team with Akio Sato.

– The offensive coordinator for Kansas University, Bill Dananhauer, resigned his position this week and will be wrestling for Don Owen as “The Equalizer”.  (I hear he’s a big fan of Hulk Hogan.)

– To the NWA, where the Rock N Roll Express returned for TV and got over big again after a couple of years away.  Also debuting was “Mean” Mark Callaway, the replacement for Sid Vicious in the Skyscrapers.

– Arn Anderson beat the Great Muta to win the TV title at the same tapings in a great match.

– Pat Tanaka was actually booked to come in as a part of the J-Tex team, but Vince basically signed him away to screw with the NWA because he had shown zero interest in him previously.

– No solid info on the buyrate for Starrcade yet, but it’s definitely under 1.5%, probably around 1.3%.  (Yup, that’s what it ended up.)  Jim Herd has already soured on the tournament concept and won’t do it again.

– Cactus Jack returned from his car accident already and he’s back doing the elbow off the ring apron to his jobber partner.  Dave thinks that move is a good way to guarantee hip surgery later in life.  (Among many other surgeries.)

– Titan might be a doing a lousy job of getting fans worked up about not seeing Royal Rumble on PPV, but they’re doing a SPECTACULAR job of pissing off the cable companies with all the whiny complaints they’re doing on TV, and Dave thinks it’s going to bite them in the ass sooner rather than later.

– And finally, Dave ends the issue with a quick goodbye to three wrestling promotions we’ve lost in the past few weeks already. 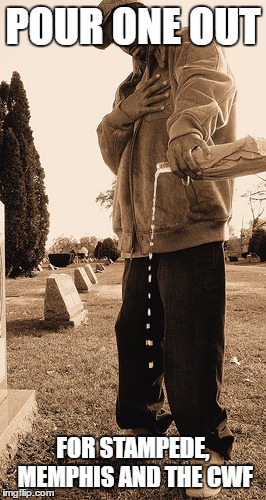